In the age of megafires, Long Beach firefighters battle blazes across the West • Long Beach Post News
- ADVERTISEMENT -
Nov 3 2021 8:00 am

In the age of megafires, Long Beach firefighters battle blazes across the West

Jason Hosea could feel the intense heat radiating from the 100-foot-tall flames threatening a small cluster of residences in the Sierra Nevada foothills.

Far from his own home, the Long Beach Fire Department battalion chief was in the small community of Grizzly Flats, about two hours from South Lake Tahoe along windy mountain roads.

But in this neighborhood where they were strangers, Hosea and his crew had a mission. They had been “cutting line”—removing flammable materials like leaves and brush to create a barrier between the flames and homes. Only a few feet away from the firefront, Hosea was the last one on the line, hoping it would hold.

“It was pretty ominous,” he remembers of the August day. Like so many battles against the massive flames, it felt like a potentially futile effort. “You see the power of Mother Nature and you’re not going to stop her.”

Hosea doesn’t usually stare down Mother Nature. As an urban firefighter, his day job could typically involve supervising firefighters dousing a large apartment fire or sitting at his computer handling administrative tasks. But this summer, the North Long Beach battalion chief was deployed to the Caldor Fire, one of the state’s largest wildfires ever, charring 221,835 acres in three counties.

The view from the vehicle of the Alpha 1363 strike team leader and strike team leader trainee Jason Hosea as they approach a group of homes threatened by the fire in Grizzly Flats on Aug. 22, 2021. Video courtesy of LBFD Capt. Frank Grimes.

As the drought-stricken state burns, more and more firefighters like Hosea are being asked to trade their normal routine of house fires and car wrecks for raging infernos tearing through rural communities. California wildfires have exploded in size over the past decade, leading state and federal agencies to lean more on local fire departments for help.

This, in turn, puts more stress on those departments. In late August, during the height of wildfire season, Long Beach’s firefighting resources were completely maxed out, with eight engines out on mutual aid deployments across the state, according to Don Anderson, assistant chief of operations.

“We never deplete our operation for the city—the city always comes first,” Anderson said, but he has had to turn down requests for aid when the Long Beach Fire Department is stretched too thin.

To serve the city alone, 128 firefighters are needed every day, he explained. And when parts of the normal force are out of town, firefighters are sometimes called back to work during their time off.

“When we have too many people out, people are forced back to work,” Anderson said.

Although there’s an inherent human cost to making people work extra hours, the budgetary cost for that mandatory overtime doesn’t come out of the city’s coffers. It’s reimbursed by the requesting agencies through the governor’s office of emergency services.

So far this year, a total of 104 Long Beach firefighters have been sent out to assist with 13 wildfires across the state, including the Dixie fire, which burned for more than three months before being completely contained on Oct. 25; the Monument Fire in Trinity County; and the French Fire, which is still smoldering near Lake Isabella in Kern County.

“They’re fighting some tremendous fires, embers and smoke all around them,” Anderson said. “They’re right in the middle of it.” 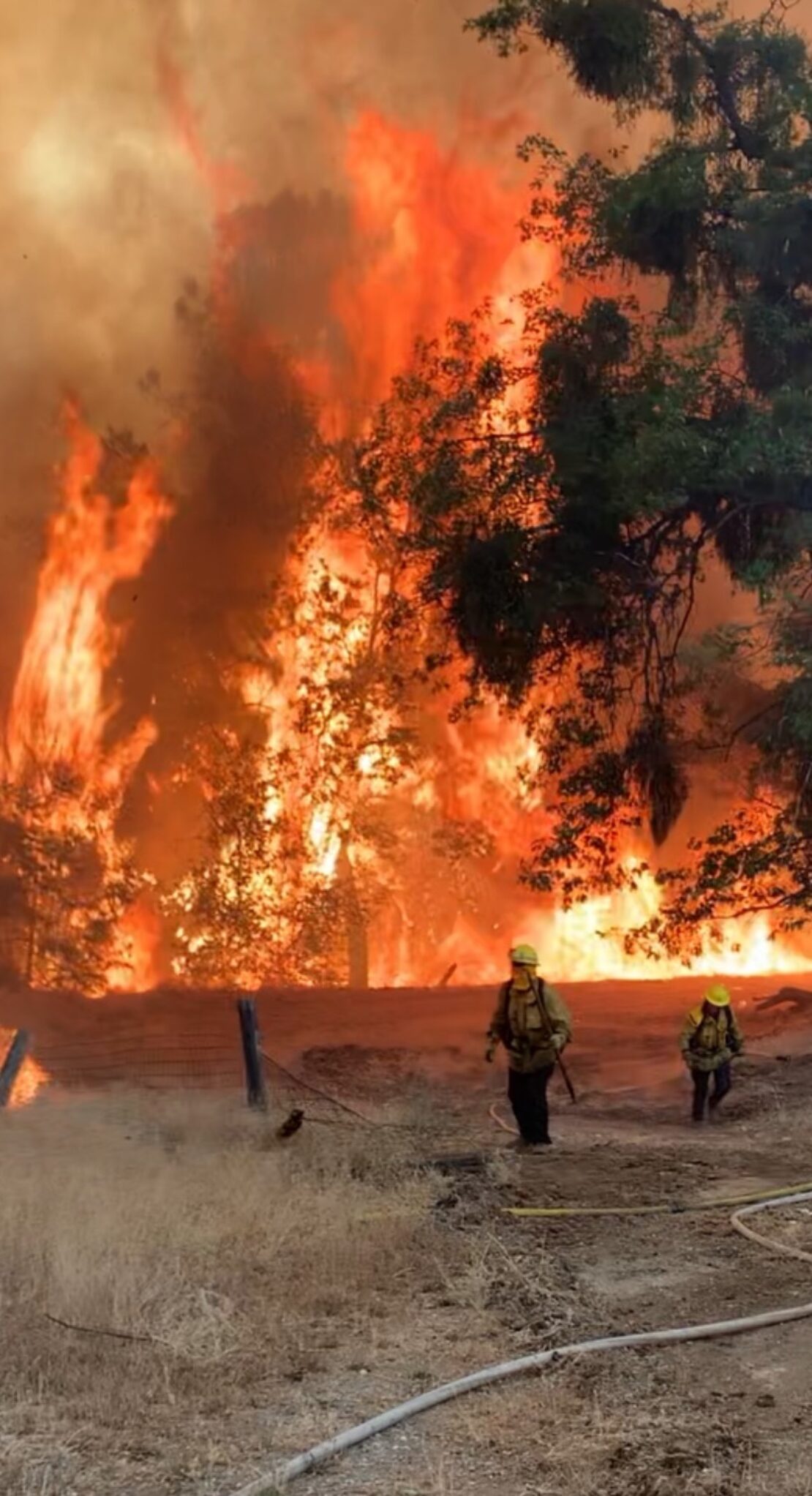 When Anderson started with the department over two decades ago, strike team deployments to other parts of the state were a rarity. That’s changed, he said. “Over the past few years, we’ve become more and more involved with wildland fires. And every year, there seems to be greater and greater need.” Nine of the state’s 20 largest wildfires have occurred in the last two years.

Dry weather conditions and climate change have driven up the size and number of wildfires, while increased development in areas prone to fire has made them more destructive.

Some deployments are so far away from Long Beach that firefighters have to bed down at hotels along the way. Still, local crews say they’re eager to go—so eager, in fact, the department keeps a spreadsheet to ensure assignments are given out fairly and everyone gets a shot at fighting the megafires.

“They look forward to the challenge,” Anderson said. “Camaraderie, meeting the mission, making a difference—that’s what everyone signed up to do in this profession.”

Fire Captain Gary Schall, a veteran of the department who has spent half of his life in firefighting, said he looks forward to going out again. “Here in Southern California, we’re on the pavement, not a hundred feet from our fire engine. We have food, water, everything that we need,” he said.

The rough terrain around some of the state’s large wildfires is a different story. 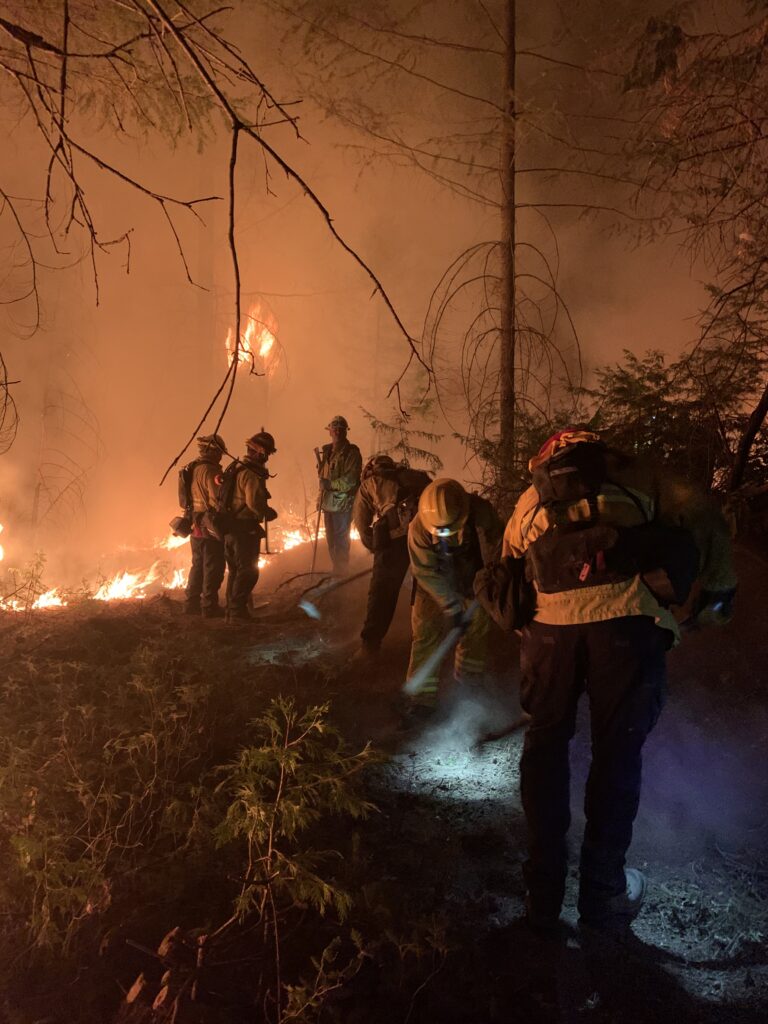 A strike team of firefighters from the Long Beach, Torrance, LA County, El Segundo and Redondo Beach fire departments cutting line near a front of the Caldor Fire during a deployment on Aug. 18, 2021. Photo courtesy of LBFD Capt. Frank Grimes.

On a recent deployment to the Monument Fire in the Trinity National Forest, Schall and his team joined another group of firefighters on a climb up a steep mountainside. The climb started around noon, he remembers, and didn’t end until about 1 a.m.

“By the time we got to the top, we sweated through everything: our t-shirt, our brush coat, everything that we’re wearing,” Schall recalls. “And now it’s midnight in the Shasta Trinity Forest, in the mountains, and it’s getting cold.”

Other firefighters, more experienced with this kind of terrain and mission, began changing into dry socks and T-shirts they brought with them. Not Schall and his team, who spent the night freezing. “I wouldn’t exchange that experience for anything, but boy did we learn some really valuable tricks,” the fire captain said.

Navigating hard-to-access terrain, going up against fires that seem insurmountable and evacuating entire communities all require valuable skills that Long Beach firefighters would be hard-pressed to cultivate on their home turf.

“It takes us out of our comfort zone,” Schall said. “We’re just improving our physical ability, our stamina, and becoming better and better—which is only going to help us with our job here in town.”

Fire crews also learn to use new equipment, like the Type 3 fire engine Schall was on during his most recent deployment. The new engine, a lime-green vehicle that looks like a crossover between a traditional fire engine and a pickup truck, is designed specifically to go off-road.

It was donated to the Long Beach Fire Department by the California Governor’s Office of Emergency Services, which has been providing local fire departments with emergency vehicles since the 1950s, when 100 Type 1 vehicles, the classic fire engine regularly roaring out of city fire stations across the country, were sent out to departments statewide. 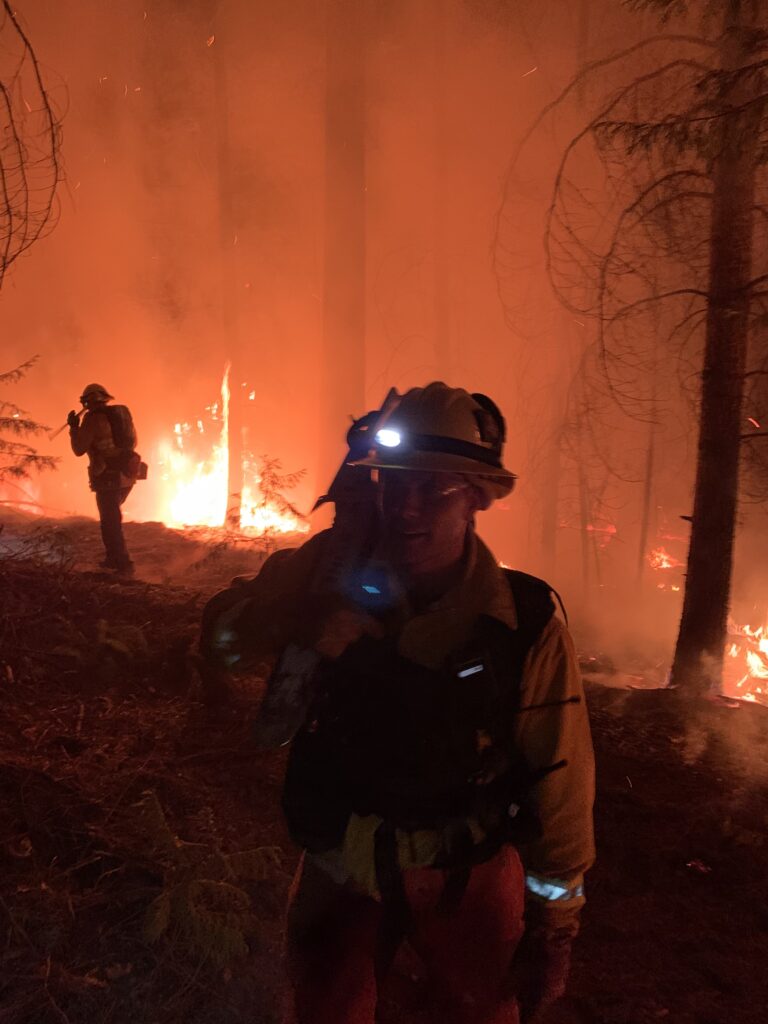 Members of a strike team of firefighters from several Southern California fire departments cutting line near a front of the Caldor Fire during a deployment on Aug. 18, 2021. Photo by Captain Frank Grimes.

Half a century later, in October of 2003, Southern California experienced the most devastating fire season in its history at that point. According to the California Department of Forestry and Fire Protection, an area the size of over half a million football fields was burned, 3,631 homes were destroyed and 24 lives were lost, including one firefighter.

In response, the governor’s office created a commission to determine how disastrous fire seasons like the “siege of 2003” could be avoided in the future.

Among other recommendations, the commission proposed the creation of a state program that would fund the deployment of 150 additional fire engines to local departments to be called upon in fire emergencies across the state.

This year, the Long Beach Fire Department is set to receive two of those vehicles, one of which has been deployed almost non-stop since it arrived in Long Beach, according to fire personnel. The other is scheduled to arrive this week.

The 2003 siege has since been surpassed by much deadlier, more destructive fire seasons. In 2018, California experienced the most destructive wildfire season on record, with 7,571 fires burning nearly 1.7 million acres, over 23,300 damaged or destroyed structures, and 93 confirmed fatalities, according to the Centers for Disease Control and Prevention.

Many of the state’s biggest fires in recent years, including the 2018 Camp Fire, which marks the deadliest wildfire event in California history, have taken place in sparsely populated areas of Northern California. There, local fire departments are far smaller than in the large metropolitan areas in Southern California, and therefore less equipped to respond to those massive incidents, making mutual aid a crucial resource.

State and federal agencies’ struggles with ever-growing fires and a lack of firefighting staff, have added to the need for outside assistance.

“[Mutual aid] allows us to be more effective in protecting communities, property and natural resources because we leverage and strengthen each other,” said Robert Baird, director of fire and aviation management for the Pacific Southwest Region with the U.S. Forest Service. “One single department wouldn’t be able to operate on its own.”

Hosea’s crew in the Sierra Nevada foothills, which consisted of one fire engine from Long Beach and one from Redondo Beach, was able to save the Grizzly Flats homes from being swallowed up by the towering flames that day in what he considered the “best save of the trip.”

In times of unprecedented need for mutual aid, helping other departments—local, state and federal—in their efforts to knock down wildfires is just the right thing to do, said Hosea. “When someone calls 911, our mission is to go provide assistance any way that we can,” he said. “When our neighbors call for help, we need to go help them.”

Long Beach escaped flames during historic fire season, but how toxic is all the smoke we’ve had?