Like many business owners, architect Alan Burks, head of the Long Beach-based Environ Architecture, saw his work dry up last year as capital projects and office designs halted in the COVID-19 pandemic.

But business has picked up lately with requests for certain office layouts that Burks said he hasn’t seen in years.

Gone are the days of open and collaborative spaces where workers can gather and spread ideas—and possibly viruses. With the threat of COVID-19, the new design space is more closed to minimize contact.

Clients now want more private offices and meeting rooms. Cubicle walls are higher and spaced farther apart. Layouts feature a double walkway system, so workers won’t have to pass each other on the way to the break room.

For Burks, the new design feels somewhat like the old 1980s designs—isolating spaces that are counterproductive to today’s more collaborative and creative work environments.

Burks has been getting more requests for redesigns as companies prepare to bring workers back to the office, but how many will return remains to be seen.

Many of Long Beach’s office buildings have been sitting mostly empty for more than a year now after health officials ordered all but essential workers to work from home as the COVID-19 pandemic hit early last year.

The change has been permanent for some companies as they realize they can work remotely, sparking fears that once-booming business districts may never be the same if workers stay home.

But with the steep decline in virus case numbers and the rise in vaccination rates—more than one-third of eligible Long Beach adults have received at least one dose of the COVID vaccine—the city’s business districts are hopeful that workers will begin to return.

A March survey by accountants KPMG showed that most major global companies no longer plan to downsize their office space after the pandemic. Last August, nearly 70% of chief executives said they planned to reduce offices, but a survey this year found that just 17% still planned to cut back.

However, the majority of chief executives said they don’t expect to see a “return to normal” until at least next year.

Downtown Long Beach saw a significant impact from the pandemic last year that was made worse by the fallout from the May 31 police brutality protests that left many storefronts boarded up to prevent looting.

By last summer, parts of Downtown looked like a ghost town, but the foot traffic this year is starting to return, said Kraig Kojian, president of the Downtown Long Beach Alliance.

Kojian thinks workers will return, but the face of Downtown may look different post-pandemic.

“We’re not sure what things will look like in the coming months,” he said. “The jury is still out.”

In one trend, more companies are considering a hybrid office where half of its workforce is remote, or at least partially remote. Burks said he’s been getting more requests to design spaces with “hotel stations” where remote workers can pop in and work for the day.

In another trend, local Realtors say they’re seeing an increase in companies wanting to downscale from their large Downtown offices into smaller spaces in other parts of the city, like the Kilroy Airport Center, which features free parking.

The Downtown office market had been growing before the pandemic, with rents steadily increasing since 2014, a July DLBA report noted. But by the second quarter of 2020, rent had dropped 3%, while new leases for offices plummeted from an average of 98,497 square feet of leased office space from 2017 to 2019, to just 3,376 in the first half of 2020.

“In a benchmark comparison of regional office markets, Downtown Long Beach was one of only two areas to see rents decrease over the past 12 months, indicating that Downtown may be one of the first markets to experience changes in demand caused by COVID-19,” the report noted. 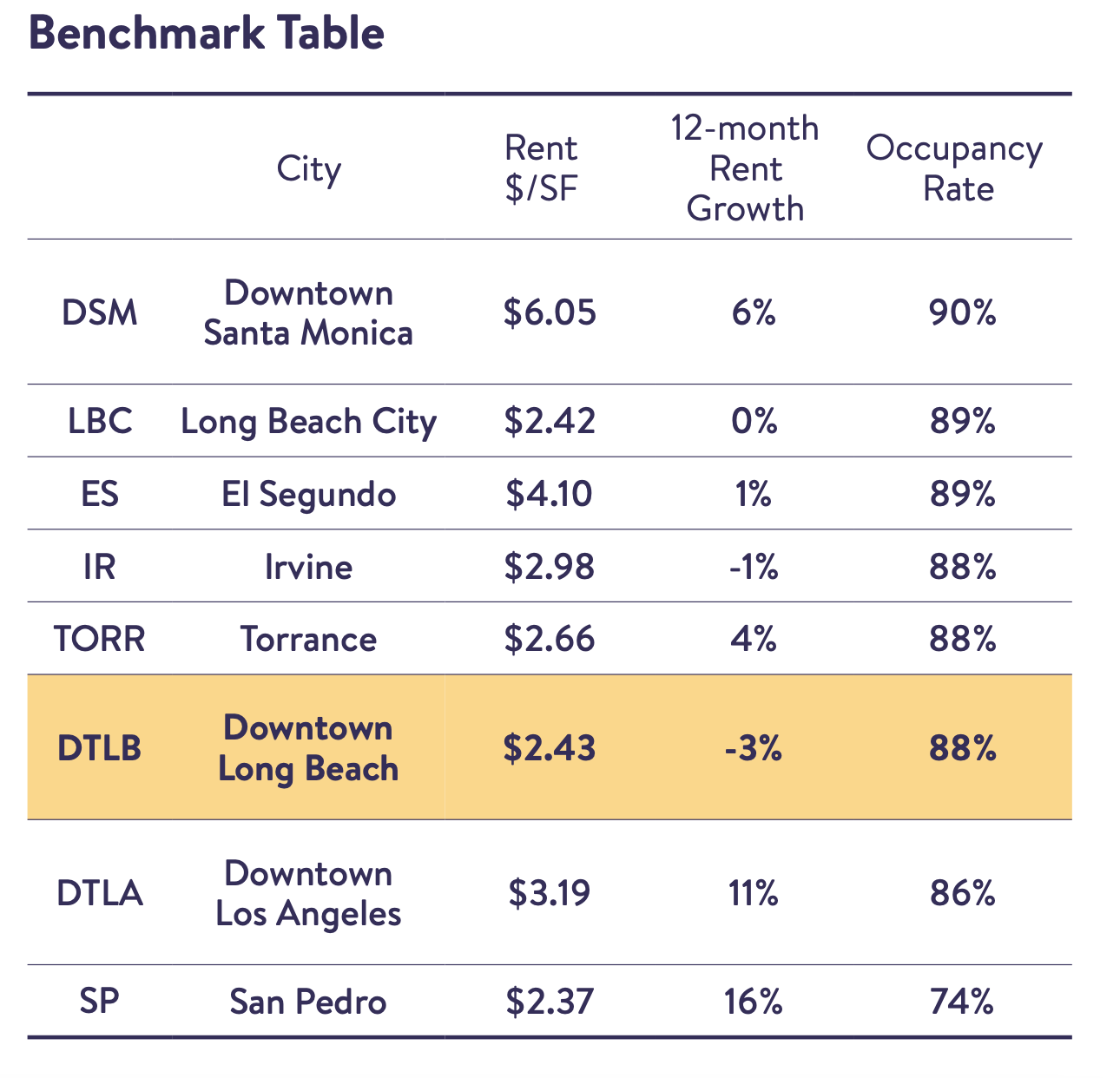 “They’re realizing they don’t need to be Downtown anymore,” he said.

Toliver Morris, CEO of Morris Williams Commercial, said he’s also seen the trend of businesses considering a move from the Downtown core, but many more will likely stay for the convenience.

“One of the drawbacks to Kilroy (Airport Center) is there’s no amenities,” he said. “You can’t just walk to lunch. Anytime you want to go somewhere you have to get in your car and drive.”

For now, he’s optimistic that Downtown, along with the rest of Long Beach’s business corridors, will see a strong resurgence. He points to a March report from the national VTS Office Demand Index (VODI) showing that demand for office space is approaching pre-pandemic levels.

The VODI, a commercial real estate index that tracks tenant demand, reported that the rate of demand has outpaced seasonal norms in the first two months of 2021, with New York City, Seattle and Washington, D.C. seeing the strongest gains.

Demand for office space in Seattle, for example, is up 182% this year. Overall, it’s down just 24% from pre-pandemic levels.

“I think the concerns that people had as far as office space going the way of the dodo is unfounded and proving not to be true,” he said. “People will come back to urban centers and ultimately they will thrive. It may not be 100% of the old normal, but it will be more than people thought in a post-COVID world.”

Kojian said office workers are vital to Downtown’s pulse, and many will want to come back.

“You can’t replace that human interaction and energy,” he said. “I think a lot of people are missing that.”