At age 24, Ronnae Williamson found herself pregnant with little support in her life.

Her mother had died in 2017 and her grandfather was her only family contact. Expecting her first baby, Williamson had many pregnancy questions, but no one to ask.

Williamson was six months pregnant and living in Long Beach when she signed up for a program called Black Infant Health that provides support for expecting Black mothers. She immediately found camaraderie with the other mothers in the program.

“It was a safe space and I got the support I needed,” she said. “I learned so much about my health, and my baby’s health and my history and how to better discipline my daughter. It made me so much more comfortable going forward.”

Established in Long Beach in 1989, the Black Infant Health program aims to address the disparities in Black infant mortality rates through support and education for pregnant and postpartum mothers.

The program, run by the Long Beach Health Department, has been around for decades but hasn’t received much attention compared to other initiatives, said Gwen Manning, who has served as its  coordinator for 11 years.

Now, Manning is hoping to change that with a new public education campaign fueled by a $1 million grant from the California Department of Public Health. The grant awarded last month will fund awareness for infant and maternal health disparities in the Black community, increased program enrollment and a pregnancy app with information tailored to Black mothers.

California has 17 Black Infant Health programs. Long Beach, which has one of the oldest ones, is one of just two sites (the other is in Fresno) chosen to help lead the effort.

Manning said the timing couldn’t be better considering the country’s heightened focus on racial disparities and the Black Lives Matter movement this year. The campaign is expected to kick off in January.

“The timing is impeccable,” she said. “Because Black lives begin with Black mothers.” 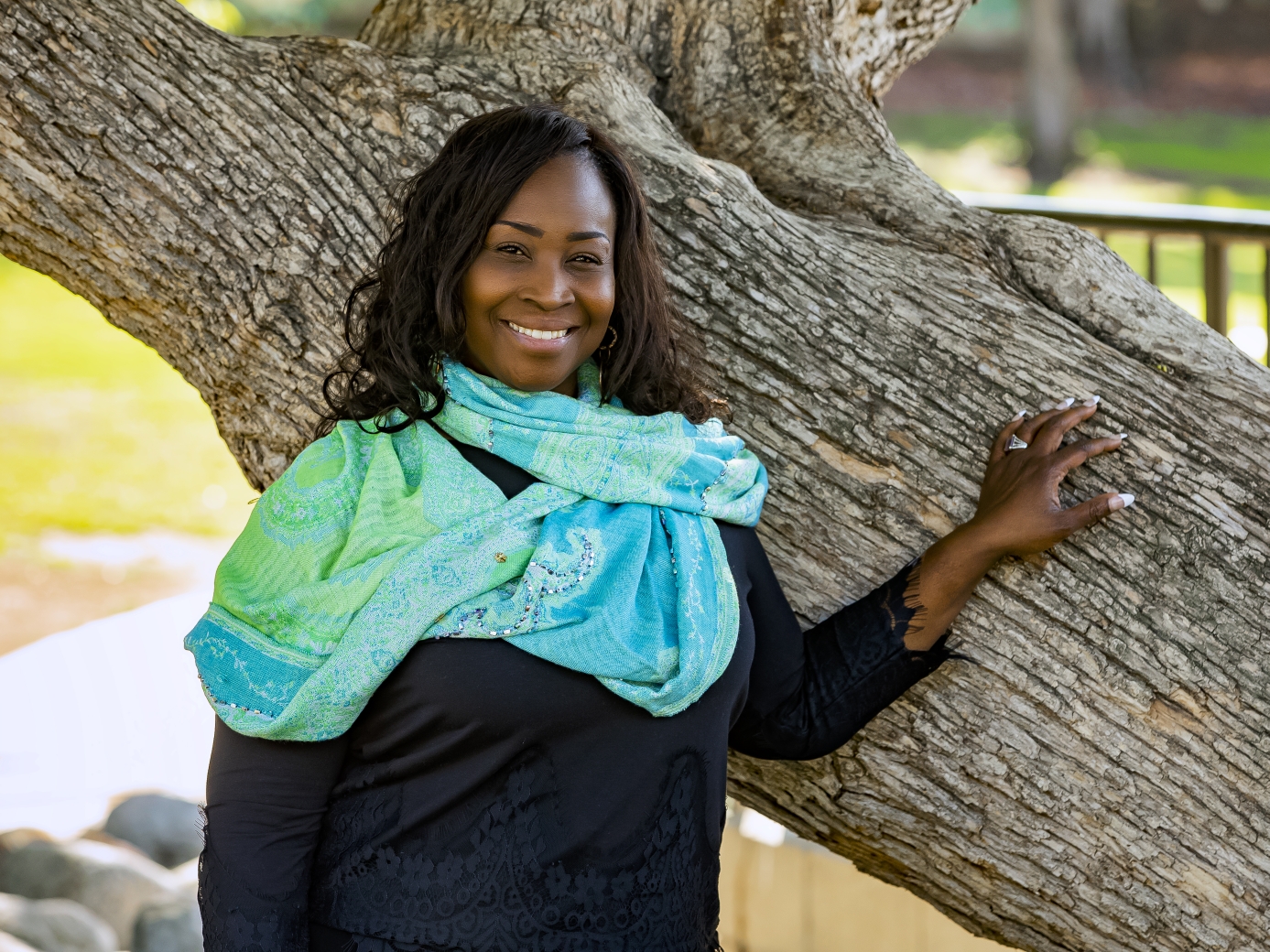 Gwen Manning is the program coordinator for the Black Infant Health program.

While infant mortality rates have fallen over the past two decades, Black babies nationwide are still twice as likely to die in their first year compared to other populations.

In Long Beach, the mortality rate for Black infants is more than three times higher than white infants.

Black babies in Long Beach are also more likely to have low birth weights, which can lead to complications, including higher risk of infection and difficulty regulating body temperature. 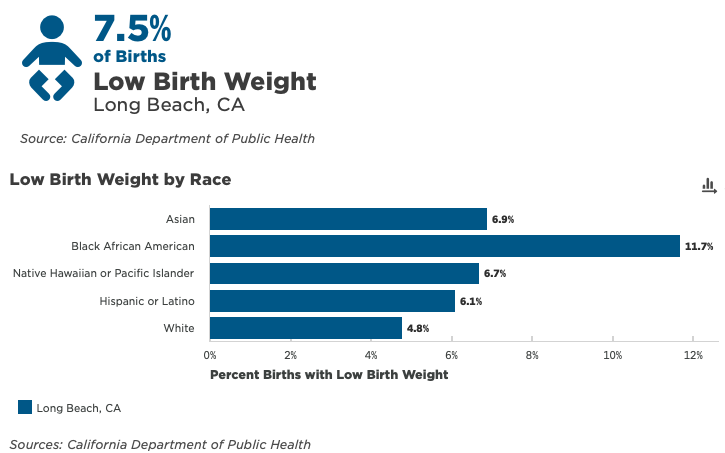 Black mothers are more likely to die during pregnancy and childbirth than other population, and research has shown that negative birth outcomes for Black women may be connected to stress and the cumulative experience of racism, especially in health care.

“It provides a level of strength and empowerment that helps mothers make the connections they need to have self sufficiency,” she said.

The program serves about 150 pregnant and postpartum women annually, with a focus on stress reduction, self-care, healthy eating and increased social connections.

The women participate in workshops and weekly support groups—now virtual because of the pandemic—where they talk about issues including Black heritage, how bodies change during pregnancy, breast feeding, stress reduction and maintaining healthy relationships. They’re also connected to resources like social workers, doctors and doulas.

After 10 group sessions, the women are given a baby shower and a graduation ceremony. After the baby is born, they participate in a postpartum program focused on parenting and newborn care.

Manning said the basic idea is that stress reduction and a sense of connection and community can lead to healthier birth outcomes for Black mothers, and the program is in the process of gathering data that it hopes will prove it.

The state since 2017 has been collecting data from all of the Black Infant Health programs to measure health outcomes including death rates, birth weight and reported stress levels, she said. A formal report is expected early next year.

The program has never had a promotional campaign until now. Manning said it’s about time, for a decades-long issue.

“When you look at infant mortality you’re really looking at a measure for how healthy any community is,” she said. “Until there is global concern for Black babies, we will always have this gap in birth outcomes.” 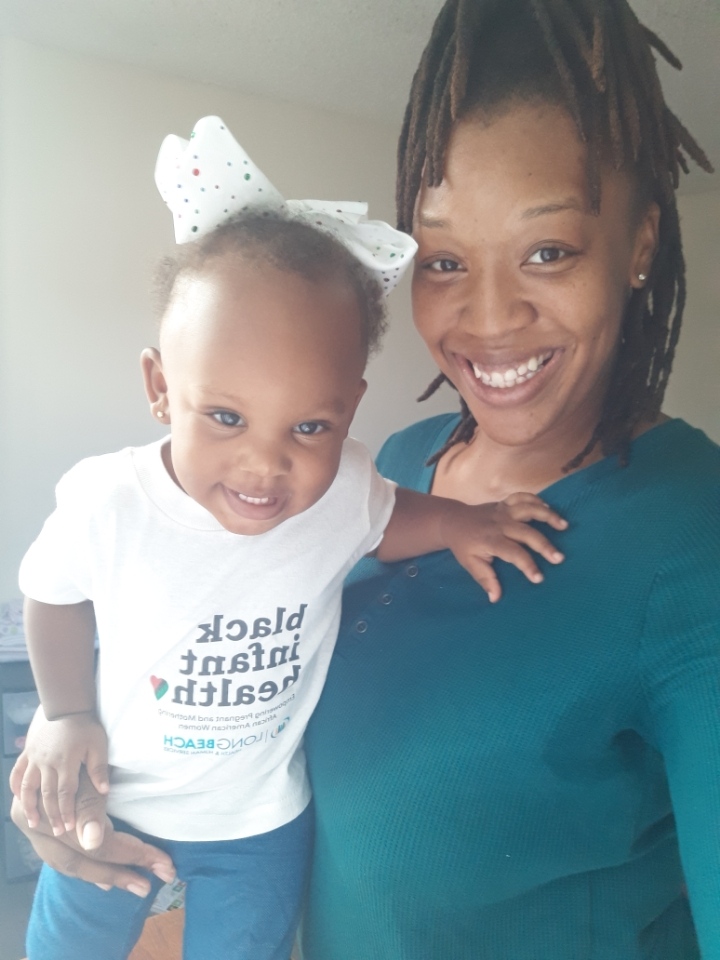 For Williamson, the program made a big difference in her birth experience.

On the night she was giving birth, she called her grandfather who was supposed to be with her in the delivery room, but he was asleep and didn’t answer his phone. Williamson next called a doula who was part of her program. The doula was there within 20 minutes.

“It was such a relief to have someone there,” she said.

A year later, Williamson now lives with her daughter Naeemah in San Pedro. Williamson is studying to become a registered nurse at Long Beach City College and she said Naeemah is happy and healthy.

She still keeps in touch with many women she met in the program. She now has someone to call when she has a question about parenting.

“I’m excited for the future,” she said.