'You can see it. You can smell it. It's dirty': West Long Beach is choking on air pollution from cargo congestion • Long Beach Post News
- ADVERTISEMENT -

On a sunny day in Signal Hill’s Hilltop Park with panoramic views of Long Beach, Theral Golden points to a layer of brown smog lining the ocean horizon, as a line of cargo ships sits backed up for miles to Orange County.

He then points to his neighborhood on Long Beach’s Westside, an area called the “diesel death zone” and “asthma alley” because of its proximity to freeways, oil refineries and the ports of Long Beach and Los Angeles, which together make up the busiest port complex in the Western Hemisphere.

In recent weeks, he said, the area has been blanketed in a thick haze while the ports have ramped up operations to deal with a massive global shipping bottleneck. 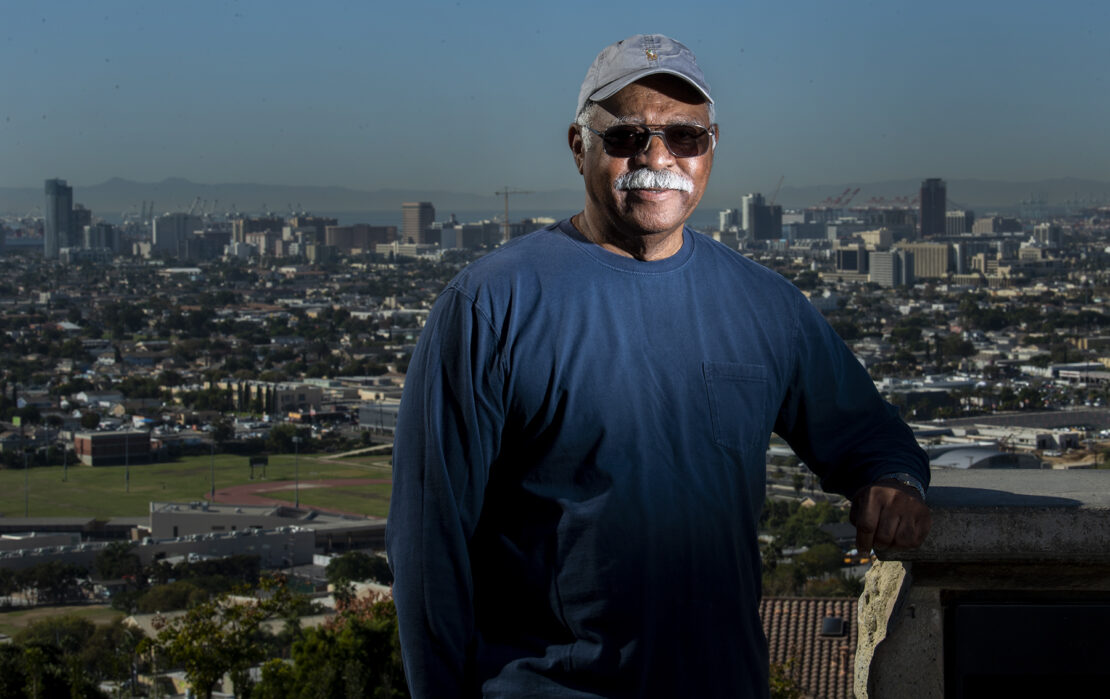 The cargo congestion is causing a shortage of common goods like holiday toys, furniture and electronics. Experts say it’s also causing air pollution spikes in nearby neighborhoods, like the Westside, that have long seen higher asthma and cancer rates, and more recently, higher COVID-19 death rates.

Looking at the skyline, Golden, a resident for 52 years, said he’s seen plenty of smoggy days, but nothing like this.

As a longtime member of the West Long Beach Neighborhood Association, he said he and his neighbors are being unfairly choked at the dirty end of the nation’s supply chain. 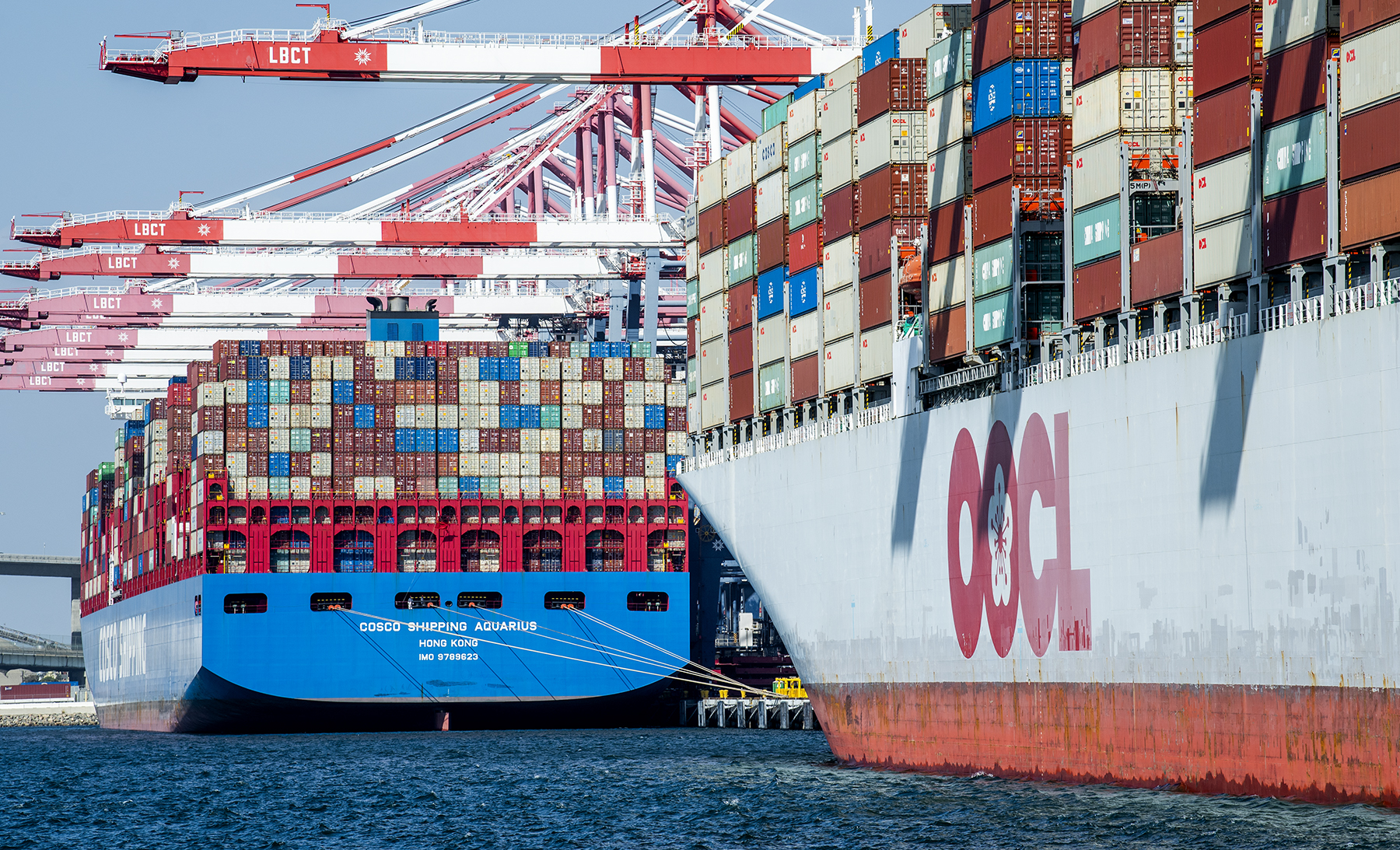 The ports of Long Beach and Los Angeles, which bring in a combined 40% of United States imports, are feeling the brunt of a global supply chain crisis that’s expected to last into 2022 as cargo ships idle off the coast waiting to unload, sometimes for weeks.

The problem began late last year as the supply chain saw a surge in pandemic-fueled online shopping, coupled with a lack of warehouse space and a shortage of truck drivers to move all the goods.

And it shows no immediate signs of slowing down. As of Thursday, the backlog had hit an all-time high of 79 cargo ships stuck at anchor or in holding areas, according to the Marine Exchange of Southern California.

The backlog is so bad that President Joe Biden has called for the ports to transition to 24/7 operations, leaving residents and local activists worried about what that will mean for air pollution, freeway noise and quality of life for vulnerable communities.

While idling off shore, the ships switch to their auxiliary engines for basic power as they pump particulate matter emissions, nitrogen oxides and other cancer-causing pollutants into the air.

While state agencies are still monitoring this year’s overall air quality impact, a September report from the California Air Resources Board found that increased cargo movement and congestion at the ports in March resulted in 14.5 extra tons per day of smog-causing nitrogen oxides.

That’s on top of the port complex’s average emissions of about 100 tons per day of nitrogen oxides—more than the daily emissions from six million cars in the region, according to the South Coast Air Quality Management District.

The report also found an extra 0.27 tons of particulate matter compared to pre-pandemic base levels. The increase was equivalent to exhaust from nearly 50,000 large diesel trucks.

Chris Chavez, the deputy policy director for the Coalition for Clean Air, said he’s noticed especially bad air quality around his home in Long Beach’s Wrigley neighborhood. Chavez, who grew up in the area and had asthma as a child, said he’s concerned about the longterm impacts to community health.

“It’s not good stuff to breathe,” he said.

Sam Pournazeri, chief of the Mobile Source Analysis Branch for the state air resources board, said the agency’s most recent report measured point-in-time air emissions in March, when the ports saw a 50% increase in cargo movement compared to 2019.

Pournazeri said the state expects to come out with a more extensive report next year showing emissions spikes from the cargo backup. With the emission rates already being tallied, he said, there is a concern that California may have trouble meeting federal clean air mandates by the 2023 deadline.

“If this situation continues, it’s going to make it way more difficult to achieve those air quality standards in the South Coast Air Basin,” he said.

In addition to regional concerns, Pournazeri said there is concern for the immediate impact to surrounding neighborhoods, many of which are disadvantaged communities of color.

“These ships are anchoring within probably three to five nautical miles from communities that for years have been bearing the burden of the air pollution from the ports,” he said. “These communities are the ones breathing this and having the health impacts.” 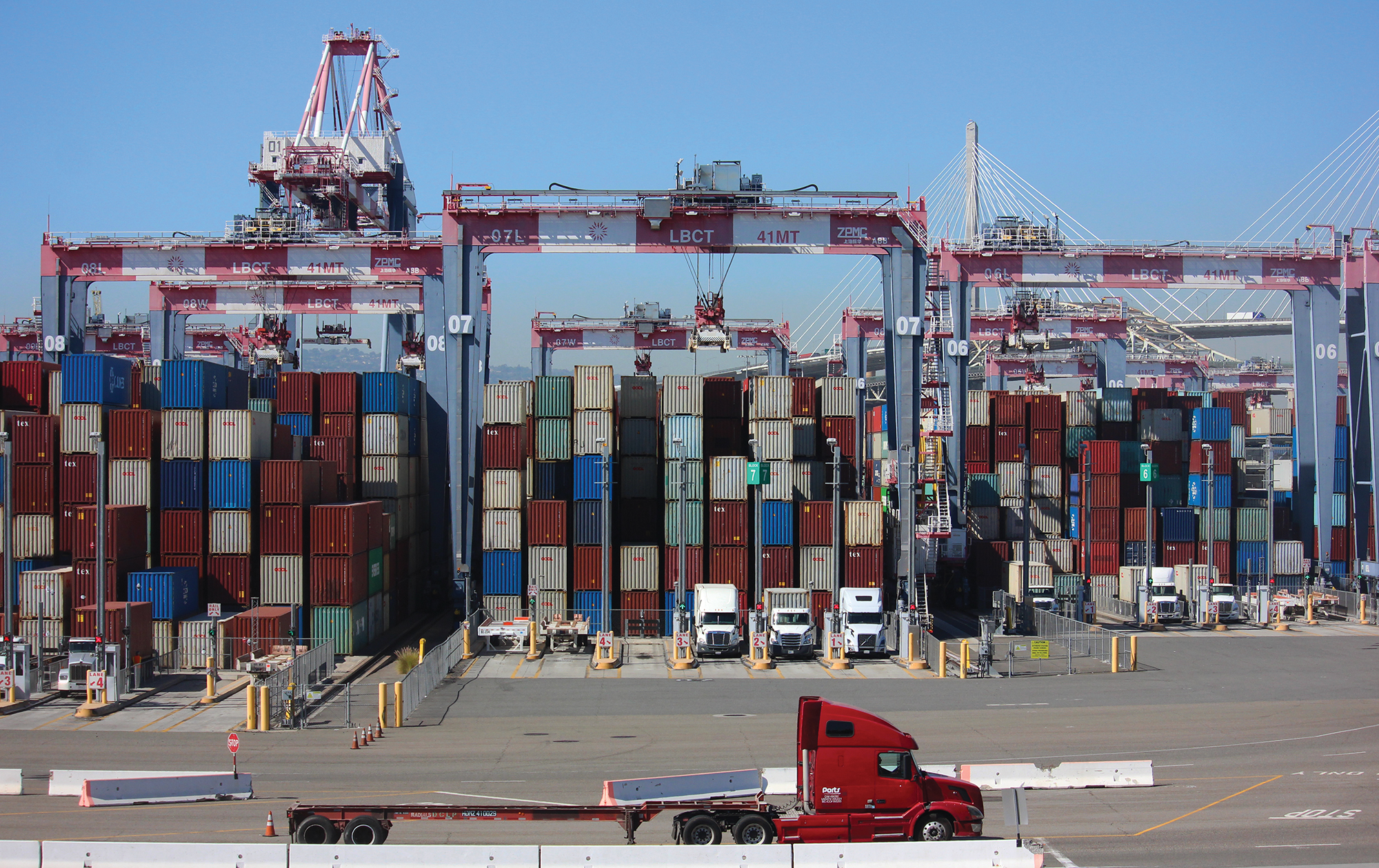 Trucks drop off and pick up containers at the Long Beach Container Terminal on the Port of Long Beach’s Pier E Thursday, Oct. 14, 2021. Photo by Brandon Richardson.

For two decades, the Los Angeles-Long Beach area has topped the list of most ozone-polluted regions in the nation, according to the American Lung Association.

Sitting just west of the 710 Freeway, Long Beach’s Westside neighborhood (along with surrounding communities including Wilmington and San Pedro) has some of the area’s highest pollution rates. The area also has one of the region’s highest cancer risks from air pollution and the state’s highest asthma rates.

And last year, with a new deadly threat from the COVID-19 pandemic, the broader Westside ZIP code of 90810 emerged as having the city’s highest death rate from the virus.

A Post analysis in February found that the Westside contained five of the city’s top 10 Census tracts with the highest rates of COVID-19 cases and deaths.

While many factors such as density, poverty and access to healthcare can contribute to Covid death rates, new research has linked air pollution rates to deaths from the virus.

A study from Harvard University last year looked at more than 3,000 counties across the country and found that people who live in regions with high levels of fine particulate air pollution were more likely to die from complications of COVID compared to those who live in less polluted areas.

Dr. Elisa Nicholas, a pediatrician and CEO of TCC Family Health in Long Beach, which focuses on child asthma rates, said the current pollution surge coupled with higher COVID rates in some neighborhoods is reflective of the city’s larger health disparities.

“It’s the same health equity issues that the people living near the ports are the lower income communities and it’s their health at risk,” she said. “Because it’s not just the ships, but also the trucks, and if you’re running 24 hours a day there’s increased truck traffic, noise and pollution. That’s going to impact sleep, wellness, anxiety and stress levels.”

To help reduce asthma attacks in underserved communities, SmartAirLA this year launched a digital tool that alerts people with asthma when the danger in the air is high. The tool collects real-time environmental conditions, reports of asthma symptoms from social media and other data to develop a rating and can then send a text message alert.

SmartAirLA Executive Director Ray Cheung said the tool has been showing higher asthma red flag days this year compared to last year when they were collecting the data. While asthma can be seasonal, Cheung said the bad air days have been coming throughout the year.

“The data shows that the conditions continue to be bad, and they’re getting worse,” he said.

A major problem in the supply chain backup is the lack of storage space for cargo containers. In one immediate solution, the city of Long Beach last week suspended a municipal code section that restricts shipping container stacking, so containers can now be stacked higher.

Matt Arms, director of environmental planning at the Port of Long Beach, said the cargo movement is a nationwide problem.

“The important thing we can do to tackle the emissions, because it’s an absolute concern, is to get things moving,” he said.

Arms said the port won’t know the extent of the impact on air emissions until it releases its annual Air Emissions Inventory report next year, but he expects to see an increase.

The Long Beach Harbor Commission on Thursday is expected to review its 2020 Air Emissions Inventory.

The port attributes the 2020 pollution reduction in part to mandatory and voluntary participation in green programs, newer vessels, replacement of older equipment and switching to low-sulfur fuel.

The Port of Los Angeles, which released its 2020 air emissions numbers last week, also saw a slight drop in emissions despite an increase in cargo movement.

With many green initiatives, the ports have made significant gains in reducing air emissions since 2005 base levels, but progress in recent years has slowed as the harbor complex continues to see record cargo numbers.

Last year was one of the smoggiest in decades for Southern California. 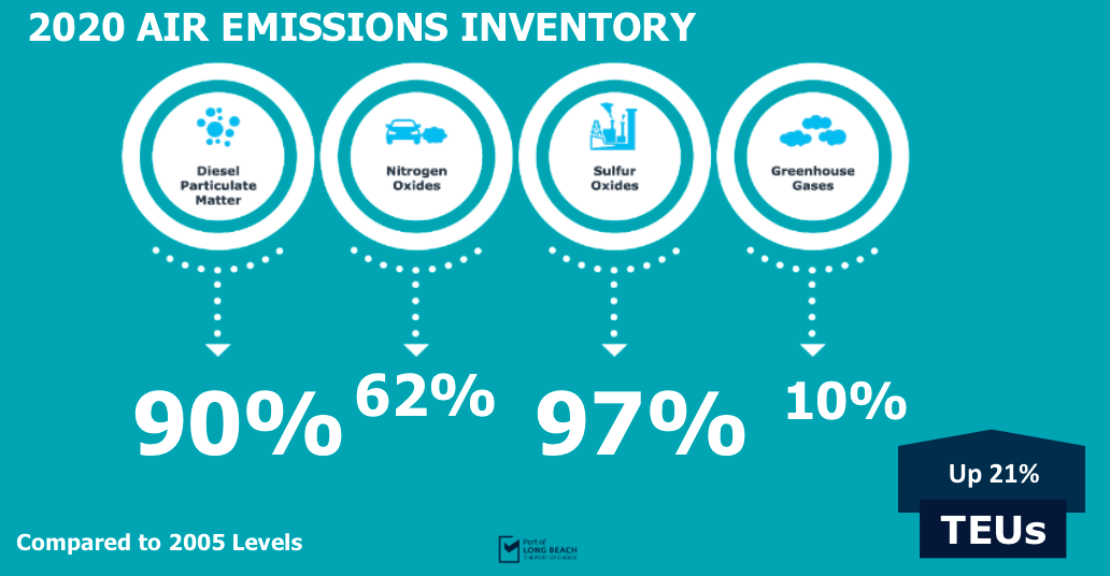 As for Golden, he’s worried that the surge might be a sign of thing to come as more consumers shift to online shopping, putting further demand on the supply chain. He and his neighbors will pay the price, he said, unless California takes stronger action.

“Why should our community give up their lives so you can expand your commerce,” he said. “Because it’s come to the point where it’s killing us.”