This is the seventh in a series looking at real estate in the city’s different ZIP codes. Read our last edition about the 90807 here.

Long Beach’s 90808 ZIP code area is fully located in what Realtors have taken to calling the East End. It’s a large area, less dense than many parts of the city, with about 40,000 residents sharing nearly 7 square miles.

The boundary of the ZIP stretches north from Spring Street up to Del Amo Boulevard between Bellflower and Lakewood boulevards and north to Carson Street east of Bellflower Boulevard. It’s mostly between Lakewood to the west and east to the 605 Freeway and beyond to include El Dorado Park Estates.

The 90808 is largely made up of detached single-family homes. Most of them went up in a hurry in the 1950s as baby boomers started their post-war families and flocked to the area, snapping up three-bedroom, two-bath homes as quickly as construction workers could put them up—7,854 houses, more than half of the homes in the area, were built during the ‘50s.

Residents in the area are, in terms of median household income, the wealthiest in Long Beach, at $111,163, compared to the city median of $66,410, and the homes are among the priciest overall, with November’s median home price at $920,000. There are no homes that approach the high-dollar homes of Naples and the Peninsula in 90803, but they are fairly uniform in prices ranging from the high $700,000 to a bit over a million dollars in the Ranchos neighborhood, which has been among the hottest areas in local real estate during the last couple of years.

Residents in the 90808 can’t complain about green space, leading the city in that category thanks to El Dorado East Regional Park at 388 acres, along with Heartwell Park’s 122.5 acres and Wardlow Park’s 15.8 acres. The area also includes a pair of golf courses at Heartwell and Skylinks.

For shopping, there’s the Towne Center on Carson Street, as well as a raft of grocery stores, including Amazon Fresh, Pavilions and Stater Bros. on Spring Street off Palo Verde Avenue.

The area is relatively new to Long Beach, with most parts voting to annex to the city rather than Lakewood in the 1950s. One noticeable holdout was an area of Carson Park bordered by Heartwell Park and Conant Street to the north and south, and Woodruff and Palos Verdes avenues to the west and east. That parcel of land voted “none of the above” during the annexation wars and remains an unincorporated area of Los Angeles County.

Here are a few selected homes currently for sale in the 90808. 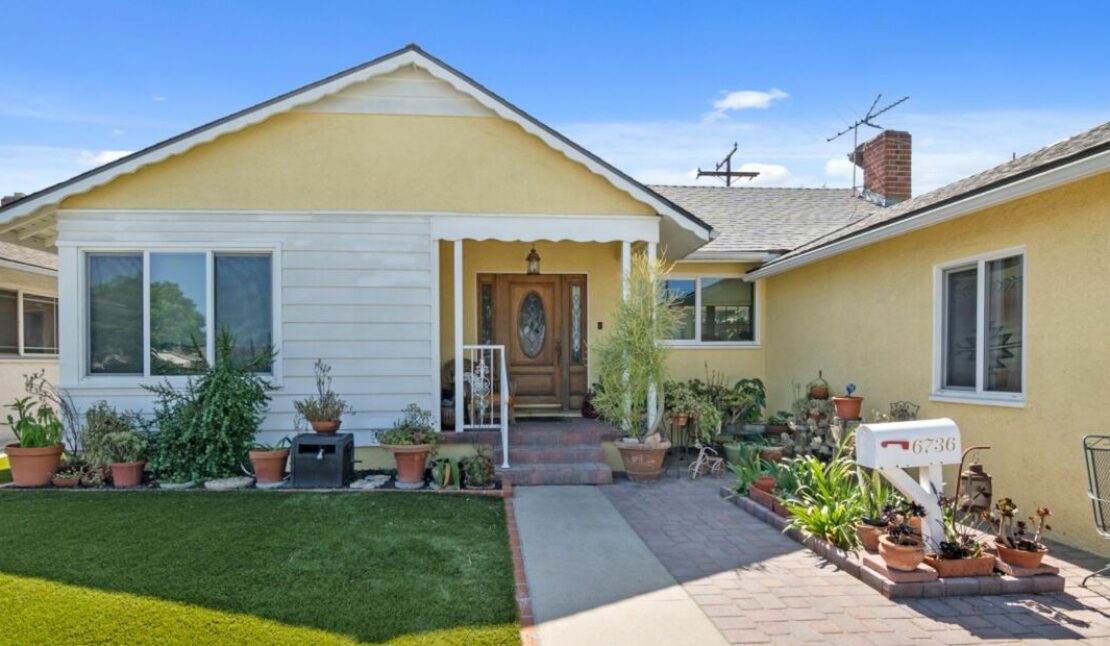 While most of the tract homes in the 90808 neighborhoods have been modified with add-ons and exterior improvements, this three-bedroom, two-bath home at 6736 Wardlow Road is pretty close to the stock configuration at 1,206 square feet and with an affordable, well under-median price tag of $720,000, a drop from its original list price of $769,000.

Don’t recoil in horror from the listing’s non-staged photographs. Sure, it needs some gussying up, if not a thorough upgrade of the kitchen and baths. That’s reflected in the price. By the time you get the home up to turnkey shape you’re likely looking at closer to the area’s median price.

Knock off a few more points for its location on Wardlow, just west of Studebaker Road, where you’re going to be hearing traffic at all hours, with some irritating hot-rodding late in the evenings.

On the plus side you’ve got the home’s large backyard, new windows and solar panels.

The listing agent is Valeska Nemetz. The 1953 home has been on the market since October. 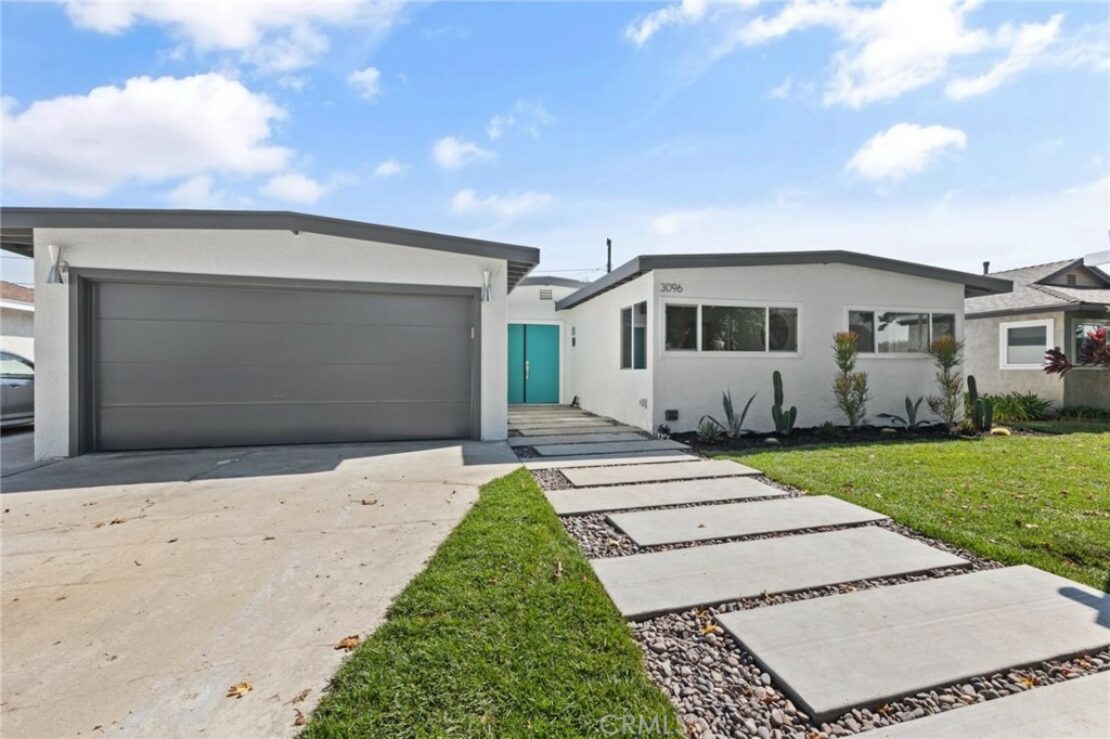 A thoroughly upgraded Mid-Century Modern home at 3096 Hackett Ave., in a quiet neighborhood near Cubberley K-8 school, has the standard three-bedroom and two baths in 1,333 square feet. Listed by Realtor Suzanna Willingham, the home has a new kitchen, bathrooms, flooring, light fixtures, paint and landscaping and is ready for a quick move-in.

The house has great curb appeal, with large concrete pavers leading to a deeply recessed entryway. The inside is bright and airy with plenty of windows, as is mandatory with the mid-modern style. It’s especially noticeable in the primary bedroom, with floor-to-ceiling glass looking out to the spacious backyard that’s big enough for a pack of dogs or for an addition to the house. 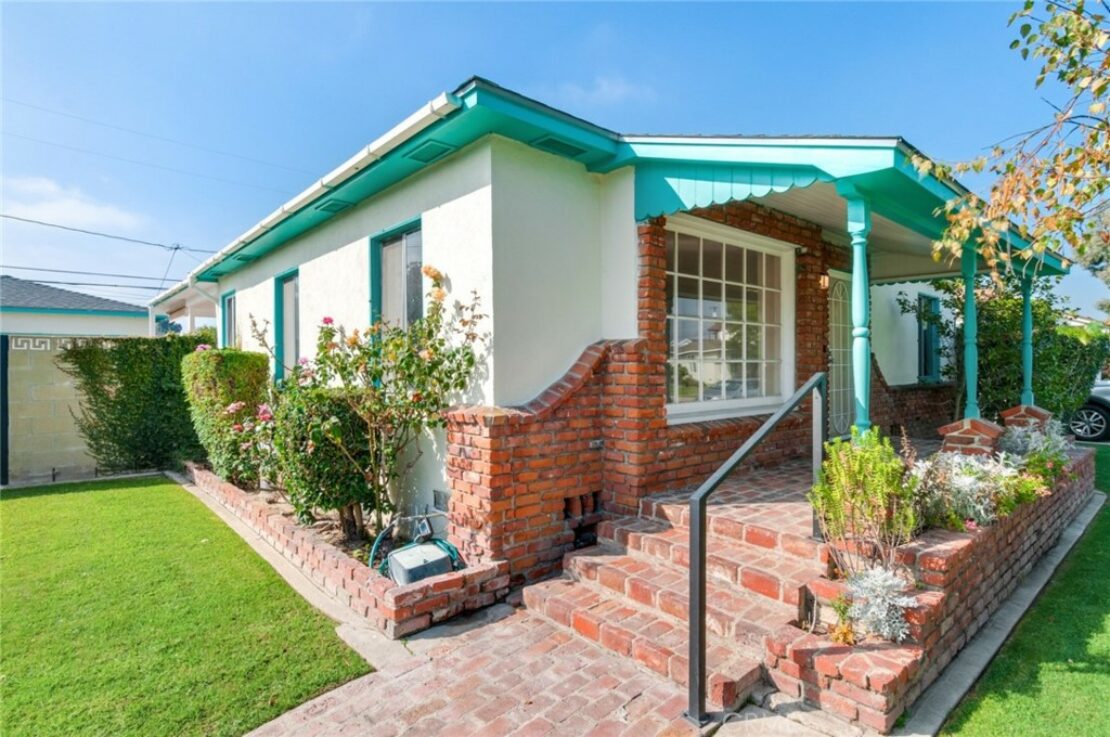 Finally, here’s a good-looking home in the quiet South of Conant neighborhood at 5836 Parapet St. with an inviting front exterior and entry. It’s got the usual three bedrooms and two baths. The baths as well as the kitchen are upgraded with particularly nice flooring in the bright and white kitchen.

The 1949 home is large for the area at 1,672 square feet, and its primary suite takes up a lot of that and includes a fireplace and a sitting room.

Listed by Gloria Heck of Balboa at $995,000, the home has been on the market for about four months.