Column: I almost died getting to the city's 'open streets' event on my bike - Long Beach Post Voices
- ADVERTISEMENT -

Long Beach’s popular Beach Streets event returned last Saturday for the first time since 2019, and thousands of people came out on their bikes, scooters, skateboards and more to enjoy the freedom that comes with open streets.

The neighborhood on the north side of Cal State Long Beach is one of the most car-dependent in the city, but, when given the opportunity, hundreds of families brought their kids out in anything but a motor vehicle to enjoy the community that’s on display when people take the streets back from cars.

But, in stark contrast to the safety of open streets, my bike ride to the event was ridiculously dangerous as I had to navigate streets designed only with cars in mind.

Like any bike rider in any American city, I’ve learned to stay hyper-vigilant at all times simply to survive; anything less and you’re one second away from death. So when I was approaching an intersection where drivers cross through the (unprotected, of course) bike lane to turn right, I wasn’t just ready, I was expecting the driver to merge with complete disregard for any bike rider—and that’s exactly what she did. Since I can only stop so quickly, she still came pretty close to contact (close enough to send my heart rate up to about 200 bpm). And she proceeded with her day, completely unaware how close she had just been to killing me in the street.

This is the reality of living in a place that prioritizes cars and drivers over everyone else. I don’t own a car, so my only option to enjoy the open streets event was to pass through this intersection, and every time I do so I fear for my life.

That means I basically just don’t go to this part of the city, or any of the other parts of Long Beach that lack the infrastructure to allow me to ride safely. I’m not surprised that everybody in the city drives everywhere given the alternative! But, as the open streets event shows us, thousands of Long Beach residents are ready and waiting for that to change.

In front of the Walter Pyramid there was a stage playing music with a dance floor occupied by several exuberant toddlers. On the street thousands of people walked or rode past a bunch of food trucks and other booths before they got to the kids zone with tons of activities for the niños, and then around the corner you could head up Bellflower past the shopping centers usually filled with cars but on that day filled with people. 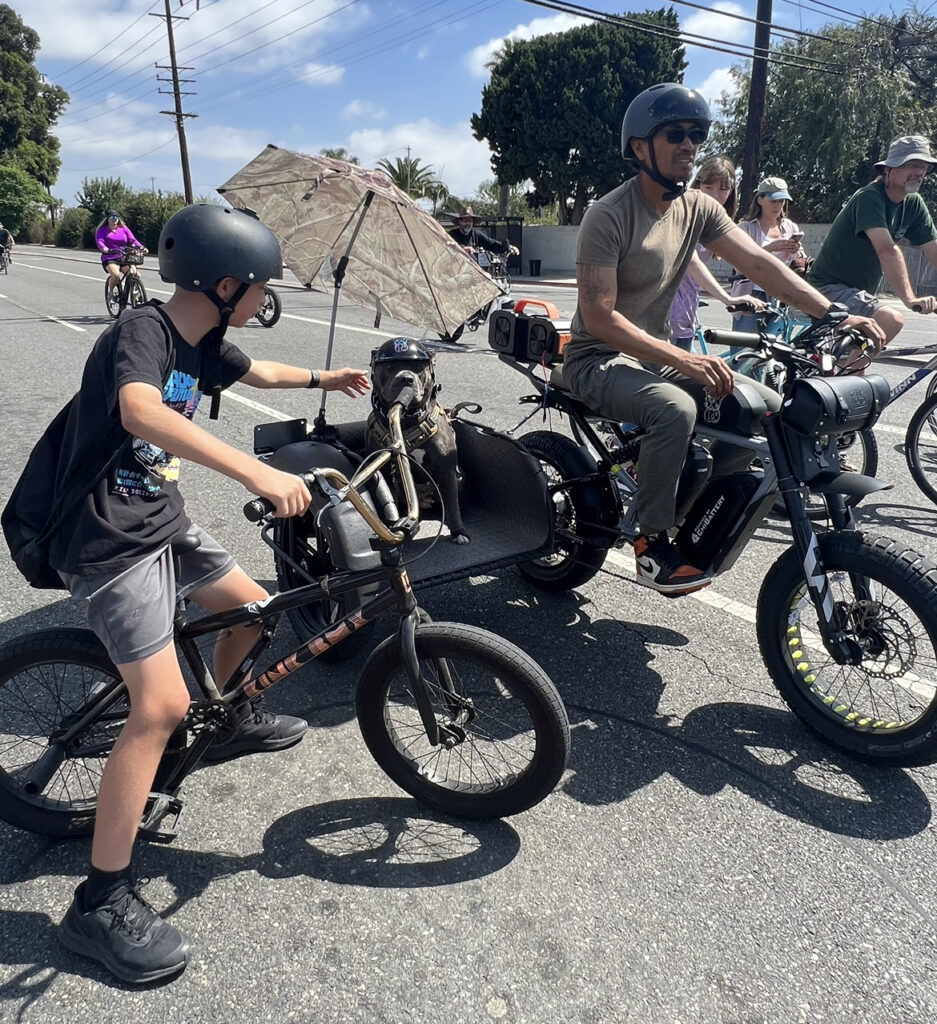 Under the freeway they had a DJ setup playing beats; at one end of the route they had a skating demo and rock climbing wall; at the other end they had a psychedelic rock band and a Beatles tribute band. I saw somebody riding some kind of e-unicycle and driving an RC car; I also saw the cutest good boy ever sitting in a sidecar with a helmet and his own umbrella to stay cool. He was a crowd favorite, of course.

I also saw about 50 bikes lined up outside a restaurant in a space that would fit maybe two parked cars. And, I saw police officers—usually cruising around in their patrol vehicles—walking and biking, or just standing around and hanging out with people. Simply by getting out of their cars and being people like us, the way civilians and the officers interacted immediately changed. Every aspect of life seems to improve when people are out of their cars, enjoying the city together.

That’s what we’re sacrificing in our everyday lives because we choose to orient our society around motor vehicles. Instead of having the safety to walk, ride, roll, and just be outside, we gave away our public spaces to cars. Instead of having the freedom to go anywhere in the city with just your own two legs, we’re forced to own a car or be limited in where it’s safe to even exist. And people like me, who can’t afford a car payment, either sit around waiting for the bus or must face death and pedal through the gates of hell just to get to the other side of the freeway. The Beach Streets event proves once again how many people are just waiting for the chance to ditch their cars; it also shows how dangerous our streets really are any other day when cars reign supreme.