Editor’s note: This article will be updated with brewery and restaurants that offer local craft beer to-go. If you are a business owner or brewer and wish to have your space listed, send a picture, what you are offering, and delivery/pick-up options to: [email protected]

Amid the chaos of figuring out if one of your favorite restaurants is available for delivery or pick-up—I still lament, daily, that Chef Thomas Ortega’s food remains unavailable—many are forgetting that we have incredible access to local, independently brewed beer.

Yup, you don’t have to buy that Natty Ice at the market because you can get your growler filled or even have beer delivered to your front door. 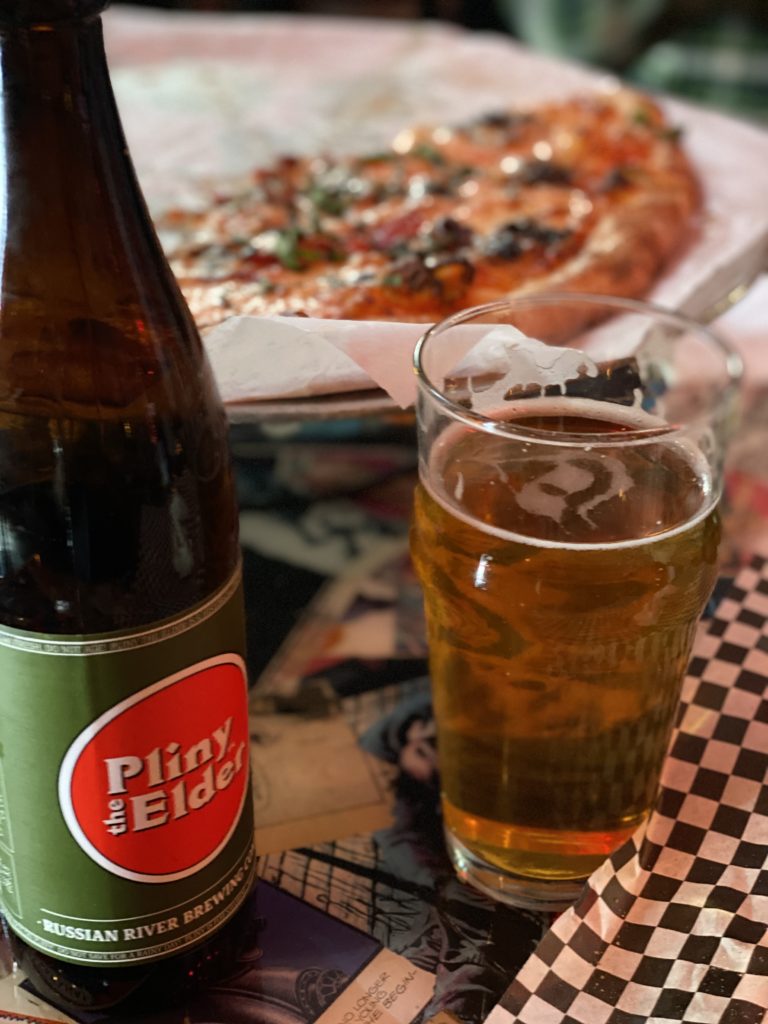 Bottles of Pliny the Elder occasionally make their way into The 4th Horseman. Photo by Brian Addison.

The 4th Horseman not only delivers spectacular pizza—their cheeseburger pizza was one of my favorite deliveries last month—but they have a special license which allows them to deliver their selection of cans and bottles (including wine) directly to your door.

They even offered a $13 mystery bag with a six-pack of six different beers—think of it like an adult Happy Meal. You can order directly through their website or by using local delivery service, Maritime Courier. 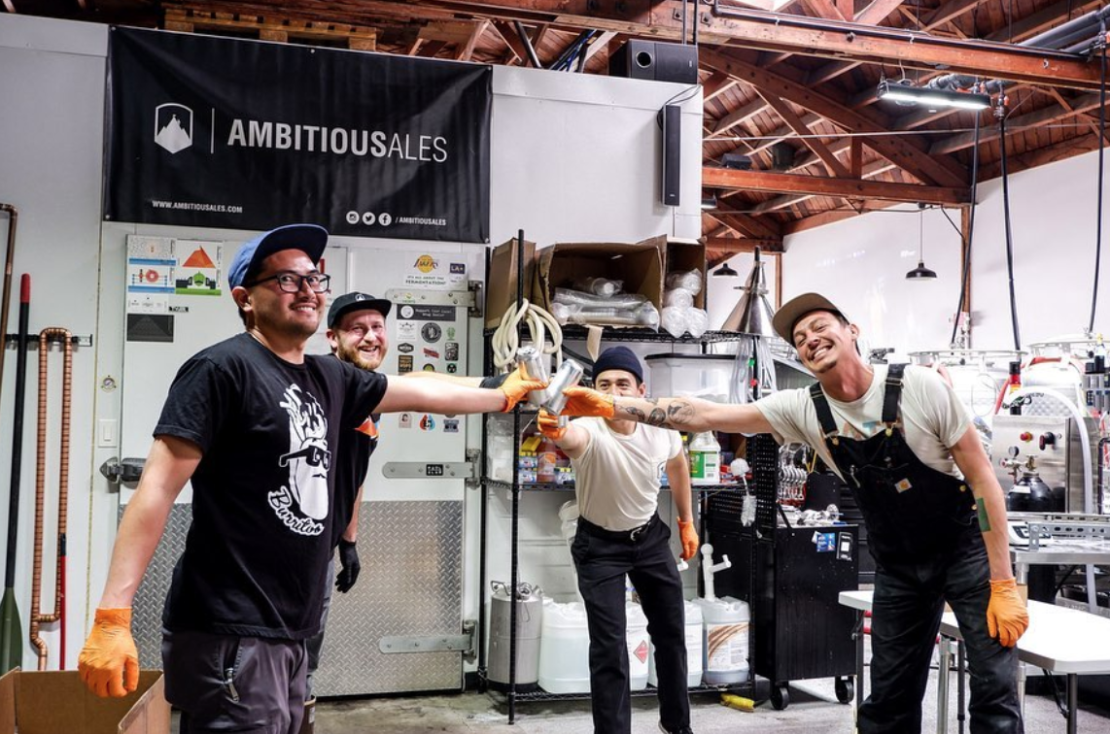 The Ambitious Ales crew practicing social distancing even inside the shop.

Owner Garrett Carroll spent well over a year in Anaheim searching for a location for Ambitious, only to keep coming up with bad locations or even worse landlords—and then he and his crew found Long Beach and soon discovered it would definitely remain their home.

Quality, quick, and accessible, Ambitious is open every day from noon to 6 p.m. for to-go beer. Orders can be placed online, by calling or simply by walking up.

12-6 p.m. for to-go beer, orders can be placed online at their webstore, by phone or walk-up. ⁣⁣⁣⁣ 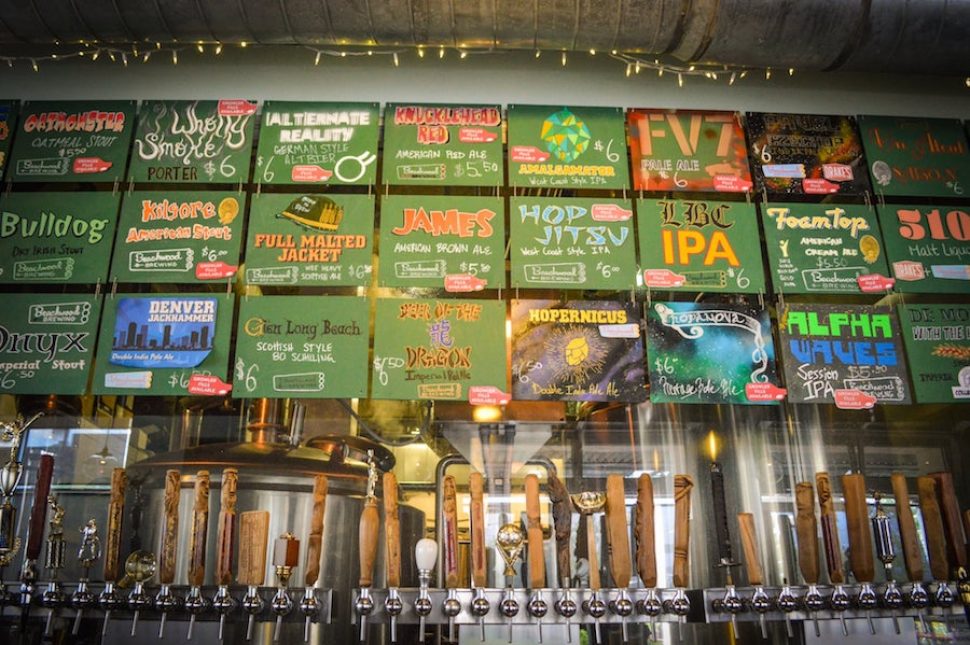 Beachwood is the undisputed beer champion of Long Beach, and definitely one of its most lauded. Named the world’s best large brewpub at the World Beer Cup and scoring medal after medal at the Great American Beer Fest, Beachwood offers not just some of the best beer in the region but in the entire country.

The Long Beach location is open Wednesday through Sunday from noon to 6 p.m. and you can order online for either same-day pick-up or next-day delivery. 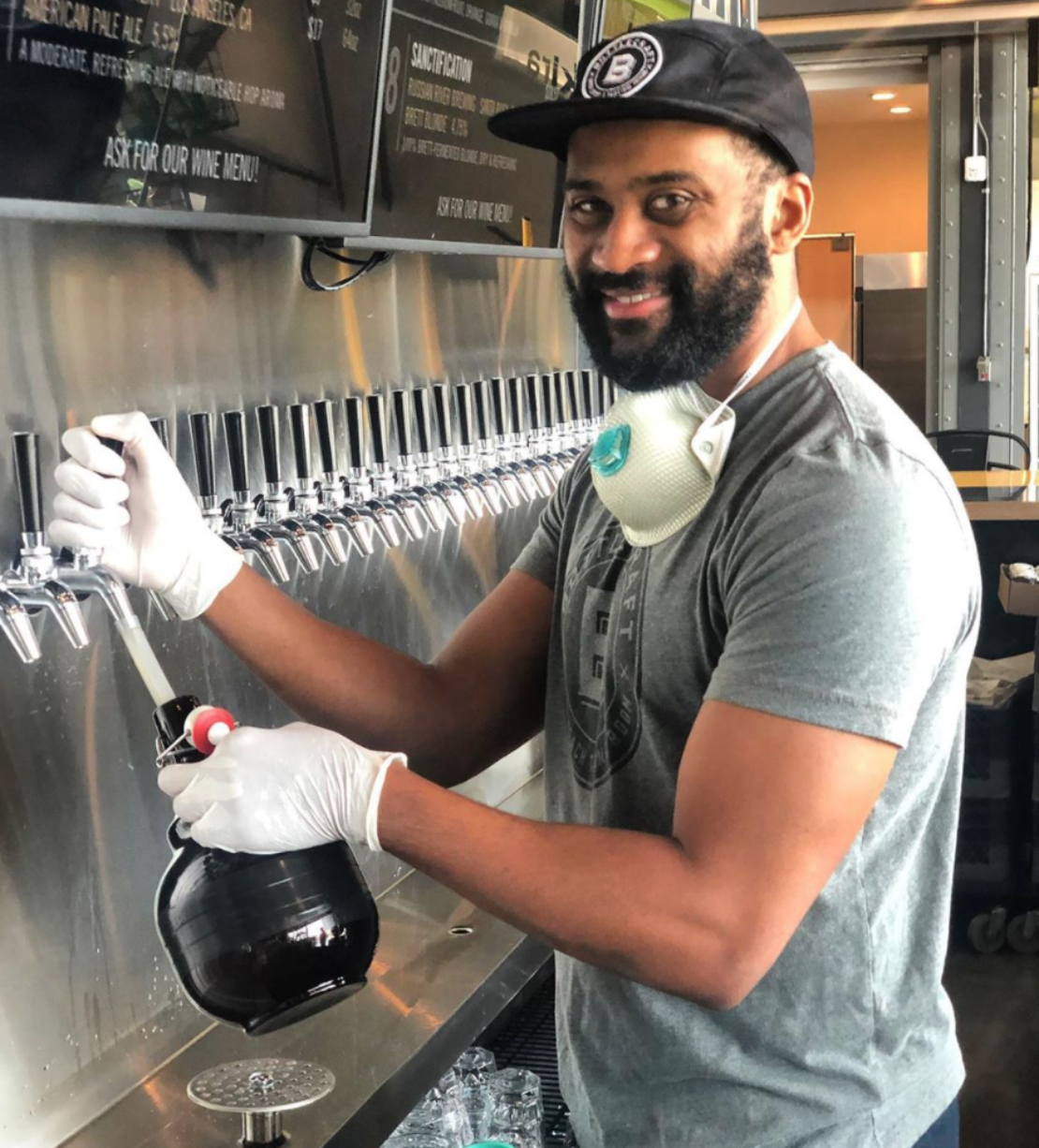 A growler being filled at Bottlecraft while following the current health mandates. Courtesy of Bottlecraft.

Bottlecraft at The Hangar

This famed San Diego-based beer shop has a status in the independent beer community that is hard to deny after it went from one location to three, there, its popularity skyrocketing amongst hardcore brew heads.

After its move to Long Beach, it quickly earned the respect of the Long Beach/L.A. beer scene with its 26-tap bar that now acts as a to-go filler for growlers as well as offering cans and bottles to go. You can order online or call them.

Don’t feel comfortable walking in? They’ll do curbside pick-up for you as well. 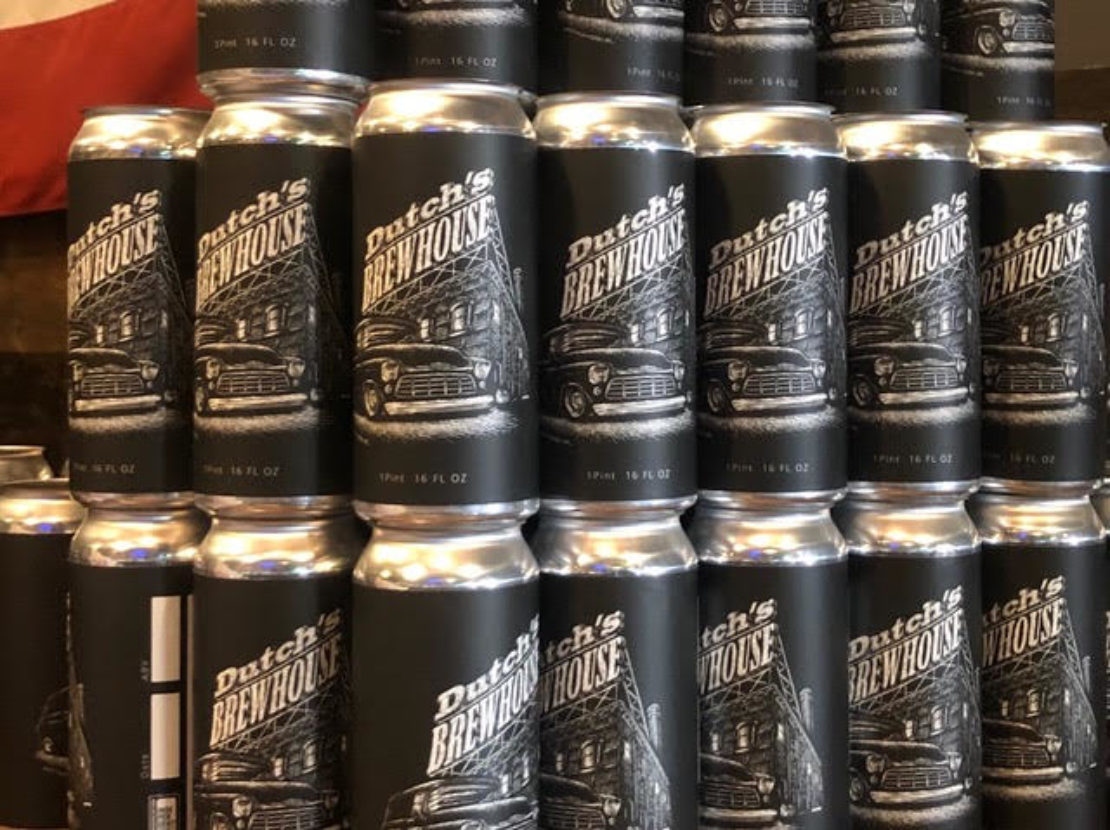 “Our beers are always changing but the up-to-date selections are always on the to-go website as well as the Untappd app,” said Anna.

Even more, they have great food you’re able to attach to your beers to go. 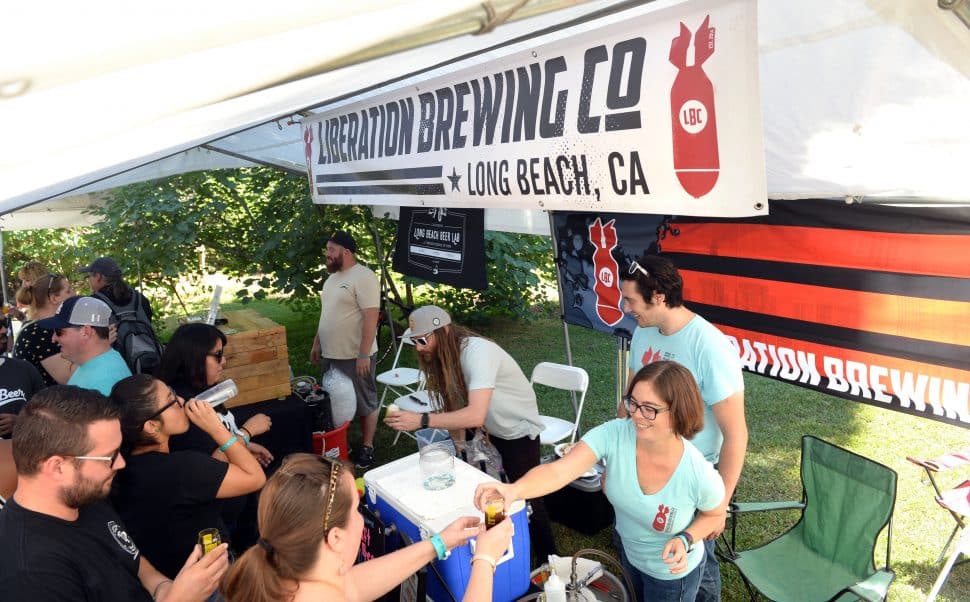 The Liberation Brewing Company is the brewhouse that I’ve long lauded as the city’s most underrated: Fresh, quality beer that is created and served by some of the city’s most affable, caring people.

Whether you run into Eric McLaughlin brewing in the back or Danny Regan and Mike Clements up in the front, there’s something distinctly homey and Long Beach-y about Liberation. And, on top of that warmth, which can still be felt even in the age of social distancing, there’s just really good beer to go with (along with, ahem, the city’s best Nashville hot chicken, which you can take with you to-go along with your beer. Win, win, win.)

You can call in your growler order for pick-up or stop in for take-out. 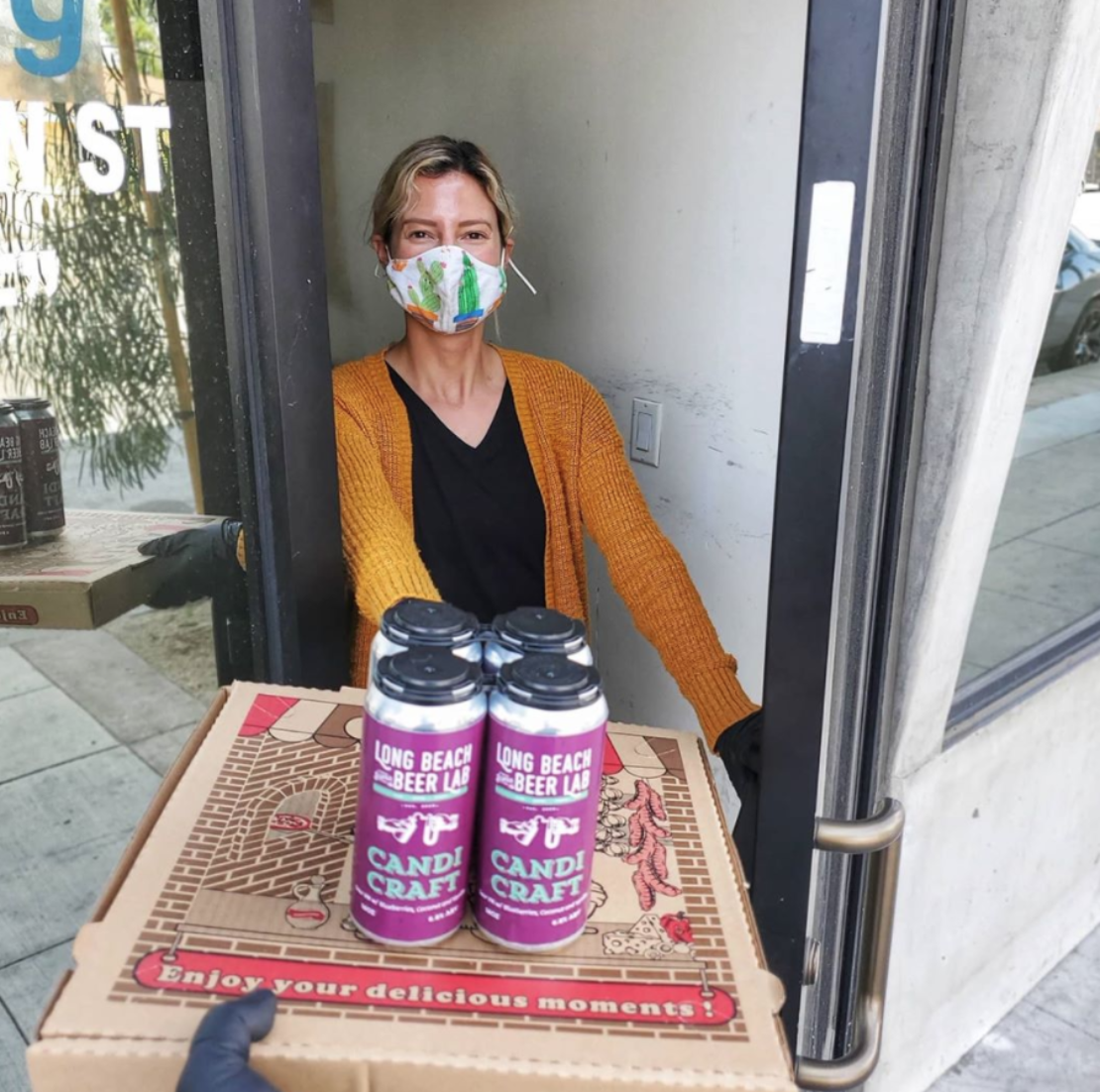 Delivery of Long Beach Beer Lab’s offerings is both safe and convenient.

With a newly minted online store, owners Levi Fried and Harmony Sage not only offer solid pizza but quality beer to-go or for pick-up. They are also now available on Postmates.

From distinctly unique offerings like a sour IPA with blueberries and coconut to habañero pepper concoctions, the beer at the Lab is not only truly different but wonderfully drinkable. 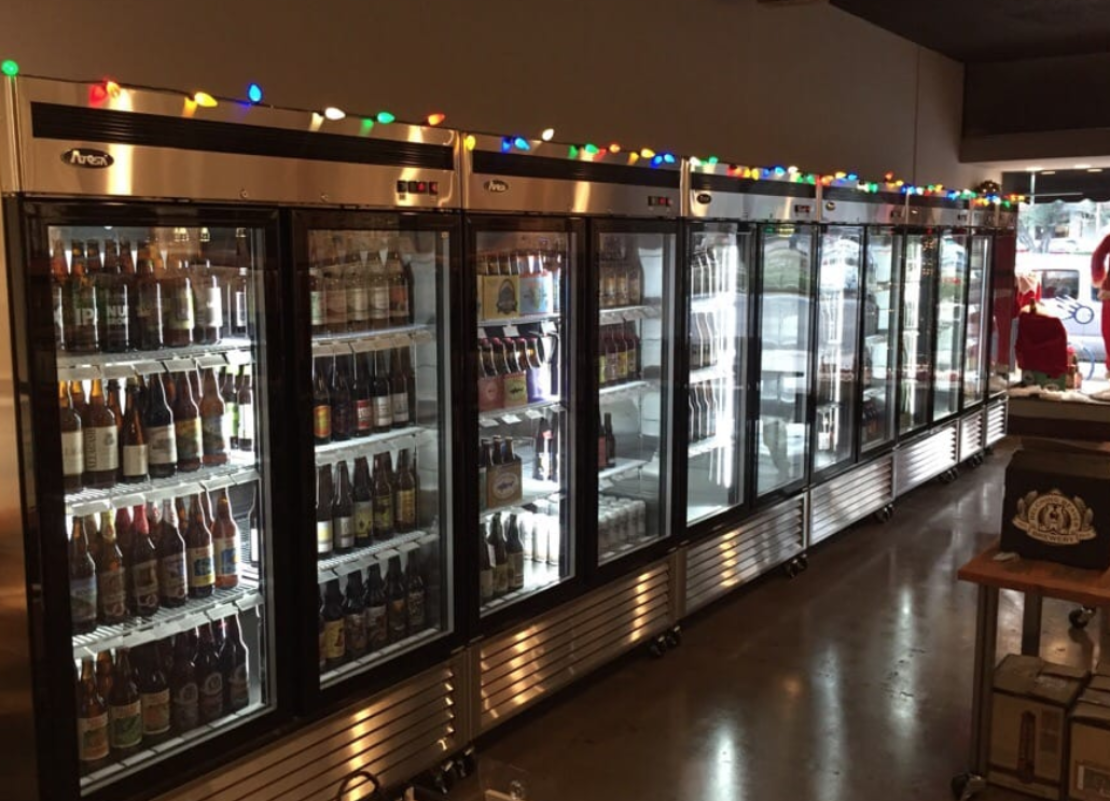 The popular Bixby Knolls bottle shop has been a destination for scoring rare beers—this past week, they had a Kings County Brewers Collective four pack featuring Marble Of Doom, Robot Fish, Lizard Wizardz, and Doogie Bowser—and they will continue to sell them.

Call in for an order for pick-up. 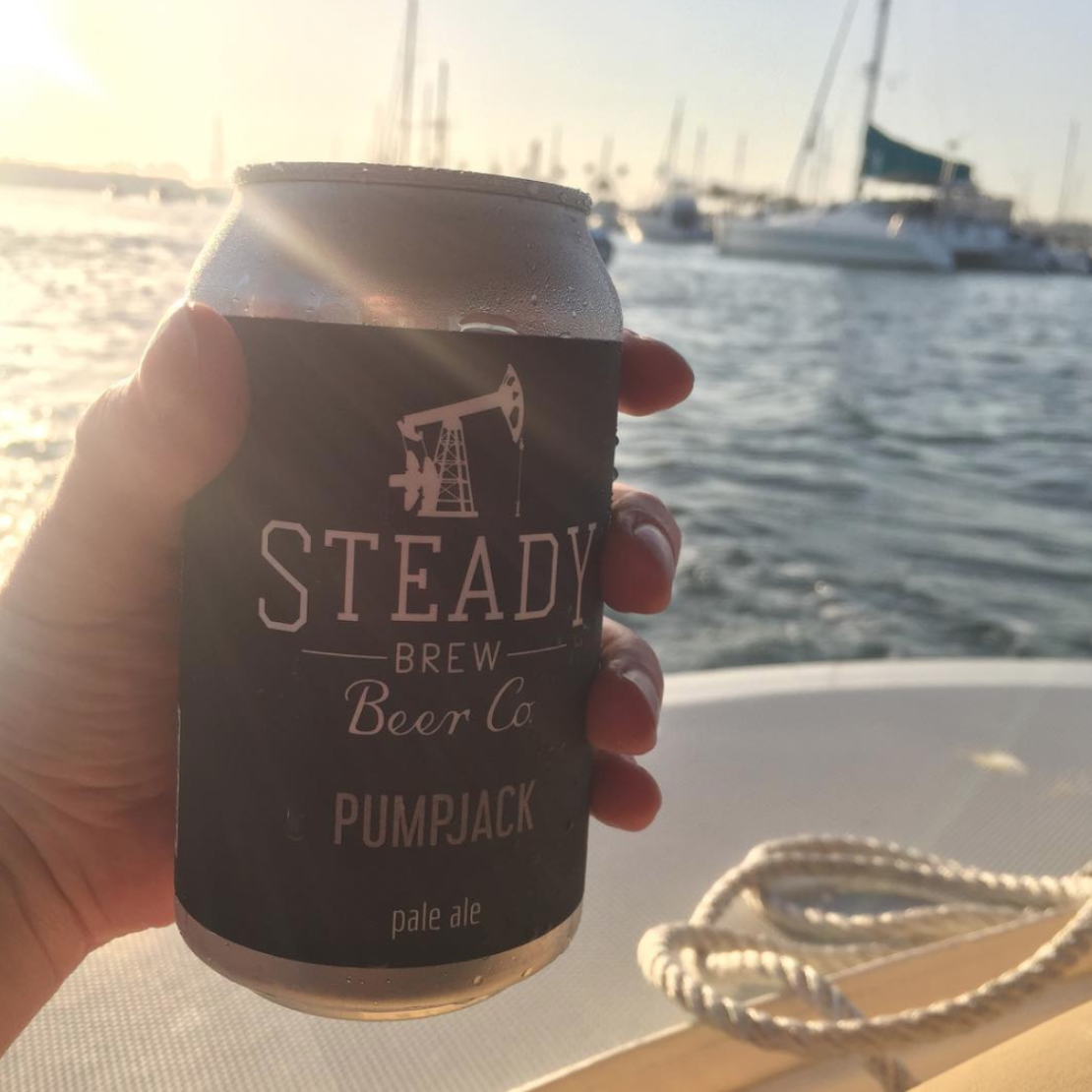 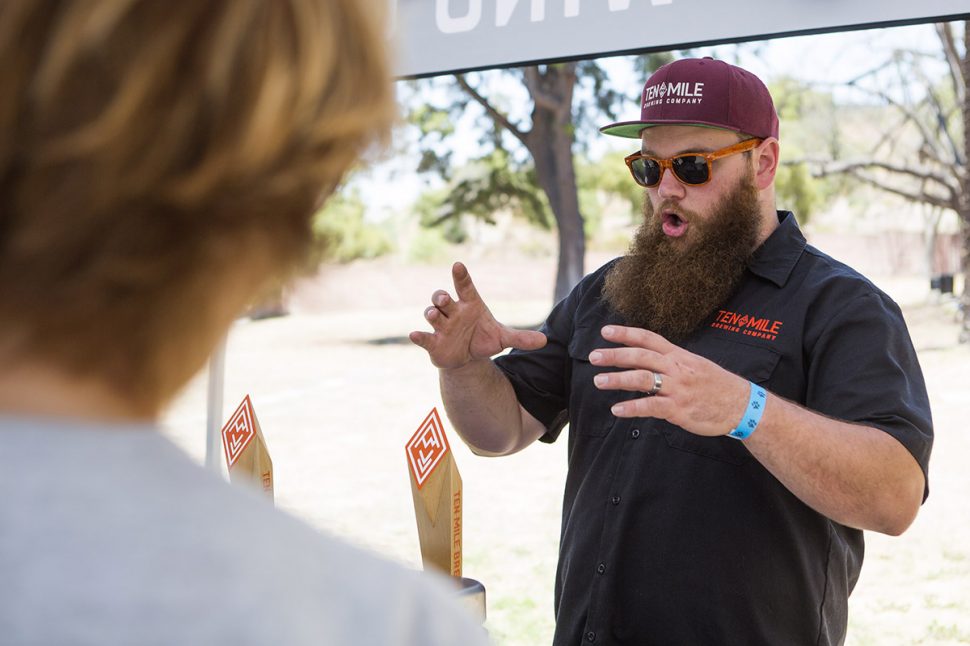 The Ten Mile is one of the scene’s most down-to-earth locations while offering up stellar brews in a space known for its quality as well as well as its loveable brewhouse hound that freely wanders the space.

You can order online, call your order in, or simply walk in for everything from crowlers to growler fills so you can safely enjoy great beer without violating health mandates. 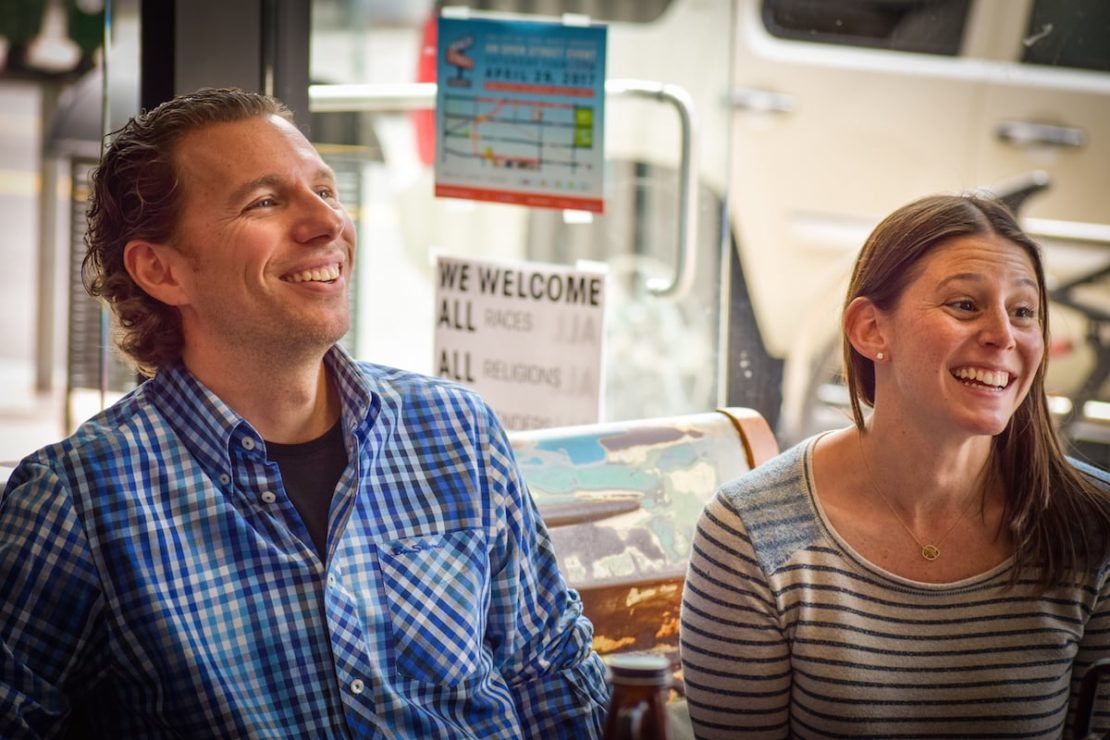 Sterling (left) and Ilana (right) Steffan, owners of Trademark, before they signed their lease to their current space in April of 2017. Photo by Brian Addison.

Trademark owners, and husband-and-wife team Sterling and Ilana Steffen have taken their brewery and turned the space into one of the city’s most viable pockets of community: constantly partnering with neighbors, makers, and food trucks, Trademark has become a neighborhood hangout as much as a notable brewery.

The taproom is open daily from noon to 8 p.m. for drive-thru or pick-up, as well as being available on local delivery service Maritime Courier and through their website. You can order growlers, which range individually from $12 to $18, with a three-pack discount added and a special three-pack mixed option for $30 which changes every Monday.