One way to help restaurants in the future? Go alfresco by opening roads and lots to diners • the Hi-lo
- ADVERTISEMENT -

City officials are floating an idea that could change how, and where, people eat at Long Beach restaurants.

The initiative suggested in the memo—signed onto by four councilmembers—will come before the council on May 19, and is part of what Garcia said in a tweet was an opportunity to “reimagine our public spaces.” Garcia singled out restaurants as being key to that reimagining, saying a time was coming when “folks can safely dine on sidewalks and open spaces.”

If you’re confused about what dining alfresco has to do with public planning, you need to understand how restauranteurs are feeling these days. Though politicians have been talking about the importance of reopening eateries, when they actually are opened for dine-in patrons it’s likely they will be allowed only to operate at half-capacity at best. Already, states that have allowed restaurants to reopen have established occupancy limits of 25% to 50%.

If you think that 50% occupancy simply means 50% of the profits, understand that even during the best of times restaurants run on small to razor-thin margins. Running at half-capacity, in many cases, simply doesn’t add up.

“It’s not a matter of making money, it’s a matter of having the ability to sustain being open,” L’Opera owner Terry Antonelli told the Post last month when faced with the probability of operating at a lowered capacity. “Our utilities, our rent, our insurance, our other expenses are still 100%. It won’t work. We’ll lose money.”

So, if restaurants are to have a fighting chance, they will need to have more space for more tables for more patrons. And to do that, Long Beach will need to rethink its social spaces, quickly. This isn’t some academic exercise but a necessity, and there’s a way to begin the process of doing that and it begins with the city’s roads and parking lots.

It’s time to look at the endless asphalt that typically accommodates driving and parking our cars and take portions of that to accommodate hundreds of diners at safe distances. Since so much of our public real estate is given over to street driving and parking or remains unused, the idea of switching that out for restaurant dining may seem radical. It’s not. Long Beach already does it with the many parklets in such food-centric, thriving neighborhoods such as Retro Row. 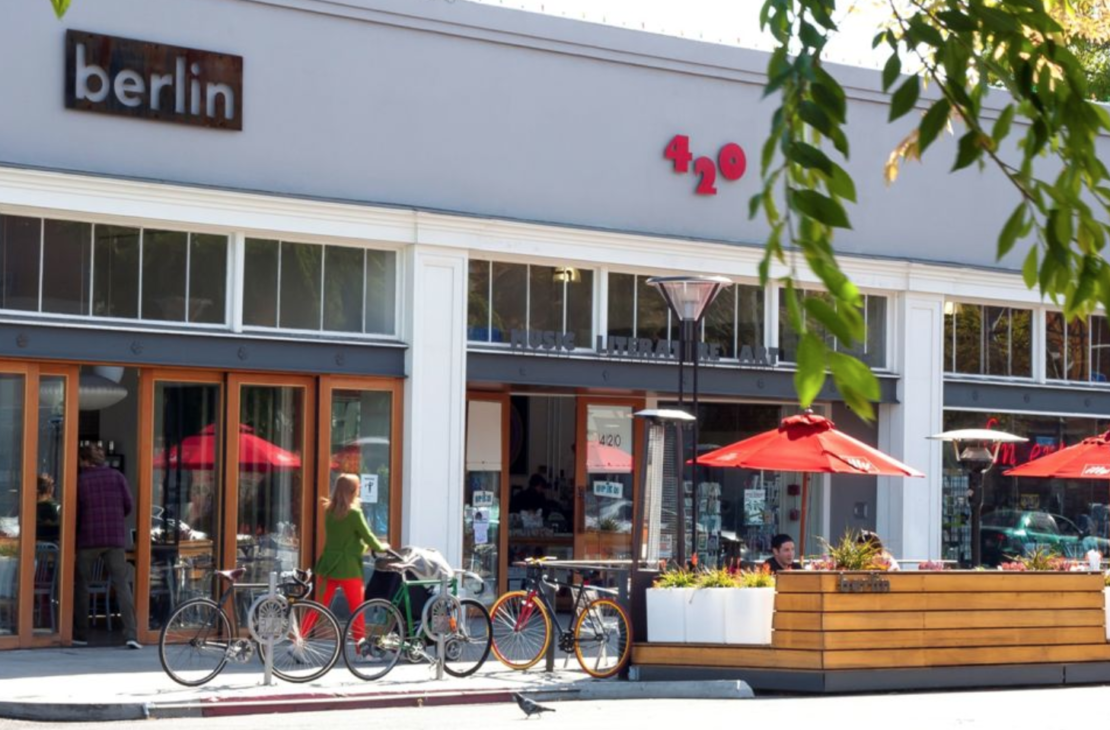 The parklet outside of Berlin Bistro was the second in the city to be completed. Courtesy of Studio One Eleven.

The idea of shutting down roads to vehicular traffic isn’t radical. Beach Streets has been closing major thoroughfares to cars a few times a year to make way for bicyclists, runners, walkers, skaters, those in wheelchairs, etc. The roads not filled with automobiles are filled with businesses and patrons with the freedom and ability to immediately explore as well as stop and patronize those businesses.

Retro Row has seen parklets transform outdoor dining space—Wide Eyes Open Palms near Retro Row just installed theirs. Now imagine if that were taken a step further and the entire stretch of Fourth Street between Junipero and Cherry avenues was closed to vehicle traffic at least part of the time.

What would be created would be an outdoor market that allows for social distancing while increasing restaurant space, not to mention the ability to bring in a small farmers market or makers tents. People could hang outside, eat outside, safely and, profitably for local restaurants who would be able to rehire staff. 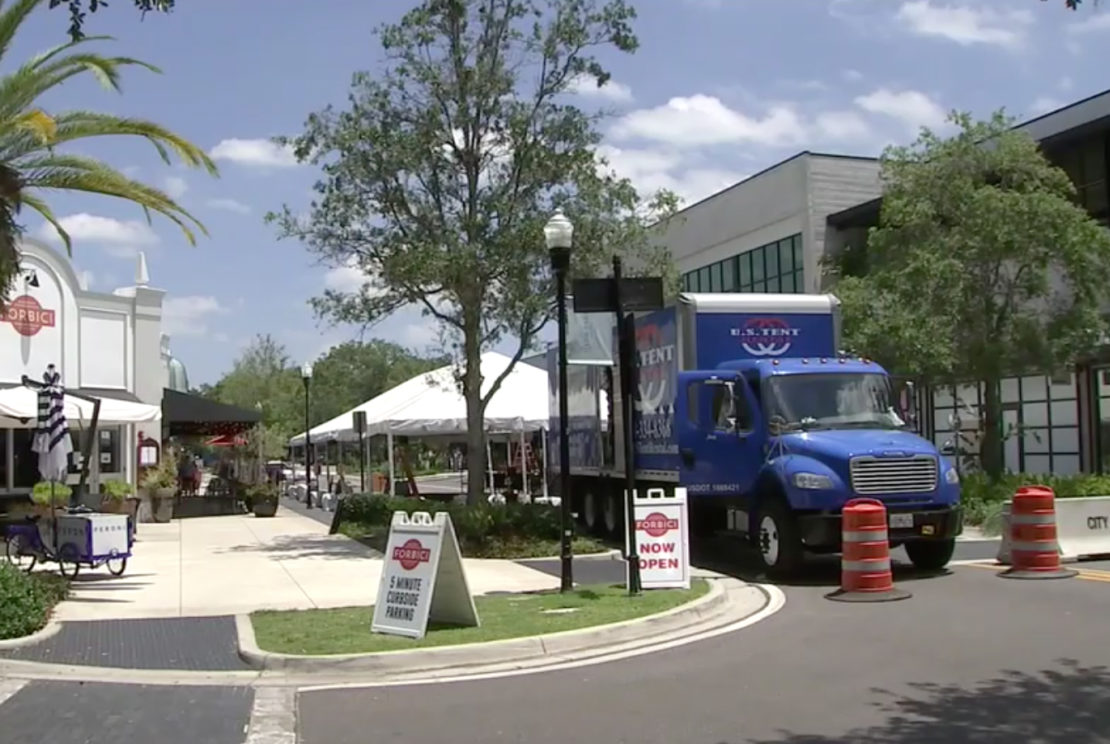 A tenting company sets up its on-street camp for Forbici restaurant in the Hyde Park neighborhood of Tampa. Courtesy of Forbici.

By closing off Retro Row between Cherry and Junipero avenues, those seats can easily be recouped by placing additional tables on or near the street and within Retro Row’s parking lot. In fact, situated a certain way, there could even be an increase in capacity. Consider that there are about 850 feet of asphalt on that stretch, which equates to hundreds of additional tables as well as additional social space for those that simply want to go for a walk or sit under an umbrella.

Fourth’s easternmost stretch before Junipero comprises Burbank Elementary on one side and a small stretch of retail on the other. The bulk of Retro Row’s food options are located nearer Cherry. That eastern end won’t have to compete for outdoor space as retailers don’t need places for people to sit, therefore it could be used for additional seating for restaurants and coffee shops, from Portfolio to La Tarantella.

This could also work for stretches of Pine Avenue, mimicking on a much smaller scale the road closures that led Beach Streets Downtown. The nearby Promenade is already closed off to traffic, it would deeply benefit the collection of restaurants that sit on the Promenade between Broadway and Third Street.

In fact, the best place to start this shift this immediately, with no effect on traffic, would be on the Promenade between Broadway and Third Street. With Congregation, The Ordinarie, Beachwood, Michael’s Downtown and Dog Haus all connected to the Promenade, they can easily extend their patios onto that stretch of pedestrian real estate and create a truly viable, walkable food haven.

Grab a coffee or a cocktail—alcohol to go must remain a thing—walk around, enjoy a meal. Think Santa Monica Third Street Promenade but even more intimate. 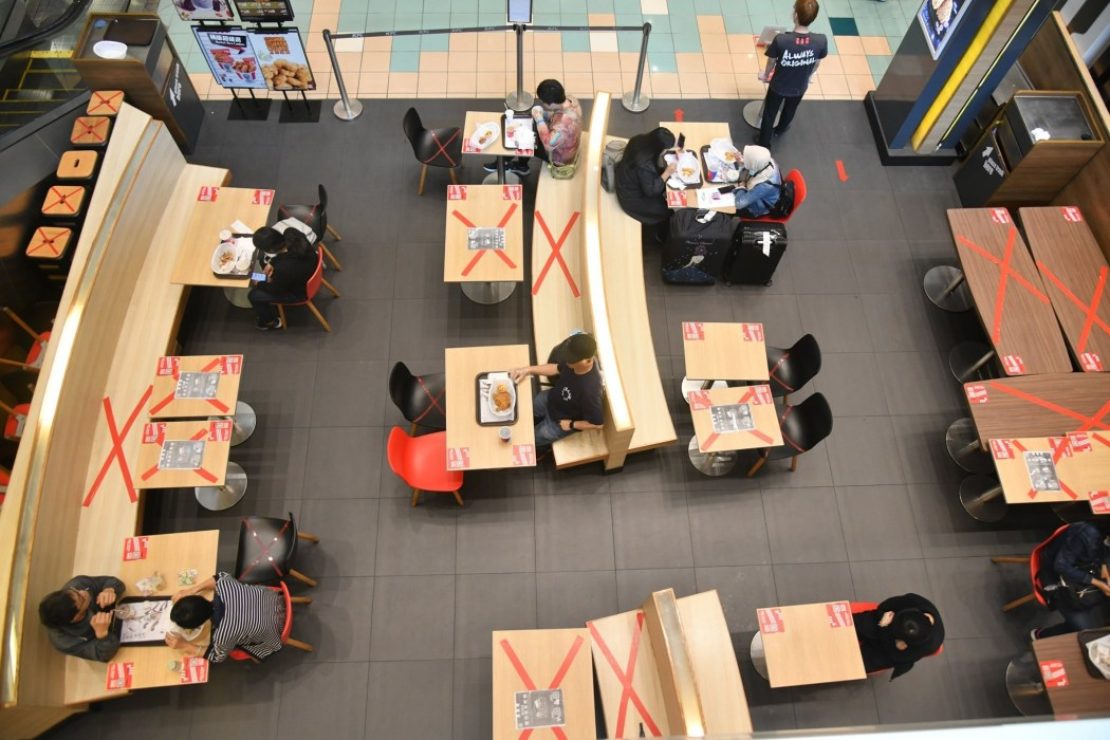 A restaurant in Hong Kong opens—with social distancing in place. Space becomes beyond limited. Courtesy of the Hong Kong Government.

In the end, what this will look like will ultimately be determined by city staff and their directives from various places, from fire and health to public works and council offices, but it will likely look very much like some of the photographs sprinkled throughout this piece.

Of course, there is always an issue with parking and, like setting up any patio, we can have hours where the street is re-opened for those who want to park or, as some cities have been doing, leave one side of the road open to parking and the other side open to pedestrians.

“The best local examples of the economic benefits of walkable neighborhoods are how wider sidewalks have been leveraged for outdoor dining in Belmont Shore and Pine Avenue,” said Brian Ulaszewski of City Fabrick. “Or how transforming street parking on 4th Street and Linden into dining parklets has increased business. Or how street closures on the Promenade for dining patios and wide pedestrian spaces have cemented restaurant patronage. All of those restaurants owe a degree of their success to use of the public real directly and indirectly for pedestrians.” 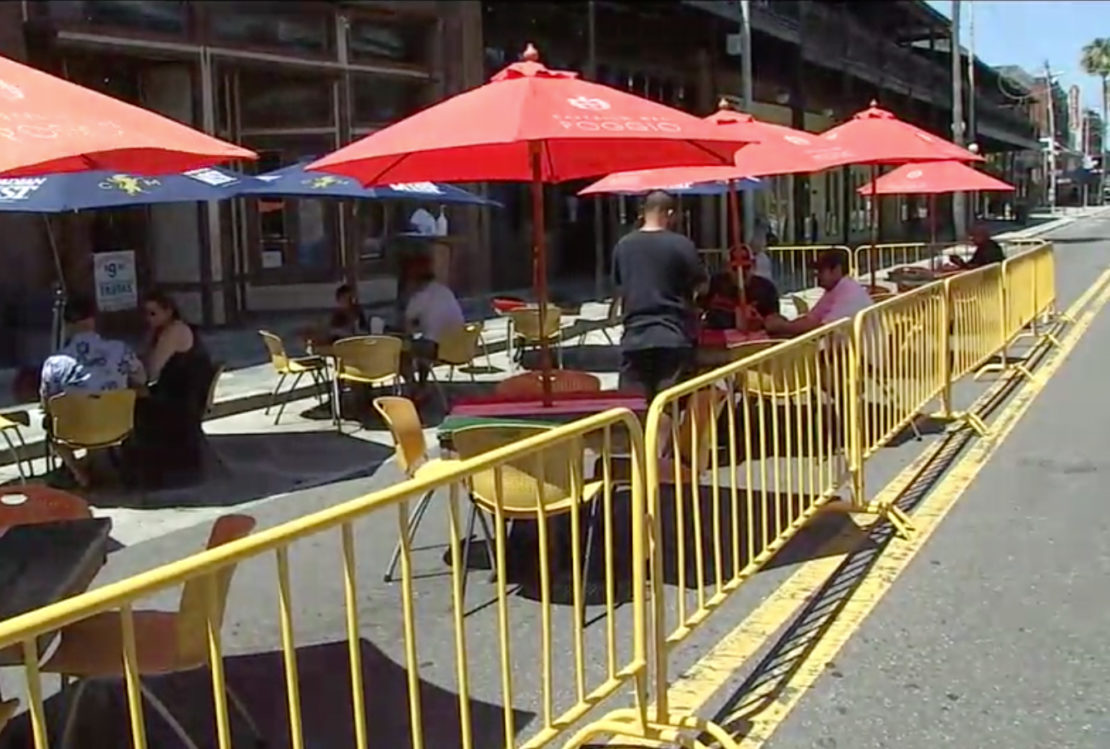 A stretch of Seventh Avenue in the Ybor City neighborhood of Tampa was shut down between 15th and 21st Streets. Courtesy of FOX13.

For those removed from areas where a street could be effectively closed off to cars, there are plenty of places where parking lots offer additional spaces. Portions of the parking area at Long Beach Exchange, East Long Beach’s most culinary-centric of spaces, can be turned into extensions of restaurant dining rooms.

The fact is, because the U.S. experience with COVID came after many other countries, we are able to see how others have handled its aftermath and that has moved some U.S. cities to rethink their own spaces. Some have taken an active stance by expanding the footprint of restaurants to the outdoors. Brookhaven, just north of Atlanta, now permits restaurants to apply for new Temporary Outdoor Restaurant Operations Permit at no-cost. The permit allows restaurants to utilize tents, parking lots and other outdoor spaces as potential seating areas that might not otherwise fall under the city’s normal code ordinances. 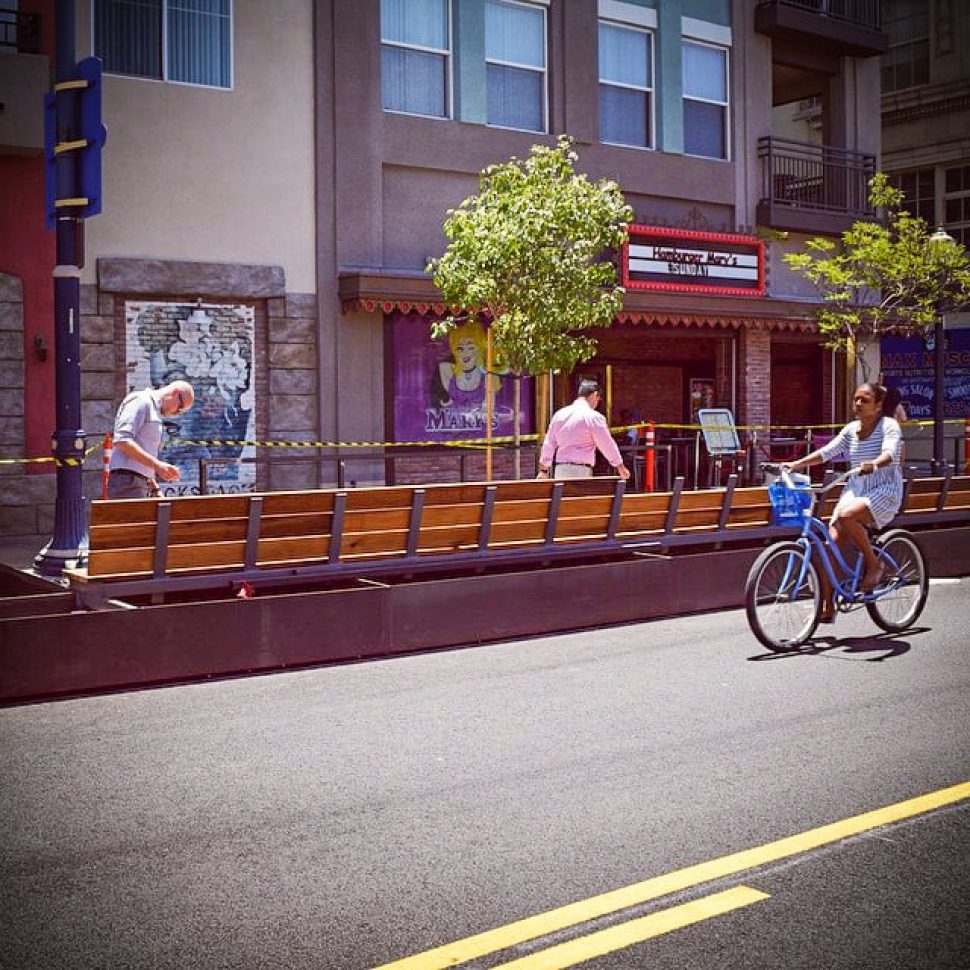 The parklet at Hamburger Mary’s on Pine Avenue when it was under construction in June of 2015. Photo by Brian Addison.

San Mateo is considering shutting down two large portions of streets in their busiest neighborhoods for outdoor dining.

St. Pete, Florida did something similar, permitting restaurants to use their parking lots as dining spaces after Gov. Ron DeSantis said restaurants could open but at only 25% capacity.

In Tampa, they have shut down streets entirely to open them up for dining, as pictured throughout this article.

Restaurants have proven to be an essential cog of the social fabric and economy, we need to muster up ideas to save them in the post-COVID world. Put more restaurants outside and, for the sake of our small business owners, don’t make it complicated.