The mass protests that have drawn Americans from across the country to stand against police brutality and systemic racism have also drawn Americans to stand in close proximity to each other, in direct opposition to what medical professionals such as Dr. Anissa Davis have been saying throughout the COVID-19 pandemic: stay inside and certainly do not gather.

As Long Beach’s city health officer, Davis has been the face of the city’s health orders and directives, handling questions from both the press and public while sitting beside Mayor Robert Garcia at multiple conferences every week. As a medical expert, Davis admits her anxiety heightens at the sight of thousands of people gathered together, but as a member of the Black community and a medical expert, she said she understands that COVID and agitating for racial justice are very much intertwined.

“The onslaught of police brutality and racial injustice, in general, has gotten to the point where this needed to be done, and they’ve taken the risks they needed to take as they have always done, like we as Black people have always done,” Davis said. “Part of what COVID-19 has brought to light is the racial disparities. We have seen that African Americans are likely to have serious outcomes or death from COVID-19. That’s not just in a bubble; that is not something to dismiss with, ‘Oh well, that’s just what happens.’ That is because of structural racism.”

Davis is part of a growing chorus of public health officials in cities and counties across the U.S. that are saying systemic racism is a public health concern. The stress and trauma “Black people have been going through our whole, entire lives,” Davis said, affects their mental, physical and spiritual health, contributing to a lowered quality of life. Those stresses can be tangibly measured: lack of access to quality healthcare, compounded with the fact that many Blacks are frontline workers, with low-paying jobs and a dependence on public transit.

“There are all these things that can be traced back to racism and we have realized that as a community,” Davis said. “When we’re fighting racial injustice, we’re also fighting COVID-19. They’re interconnected and you can’t simply disentangle them.” 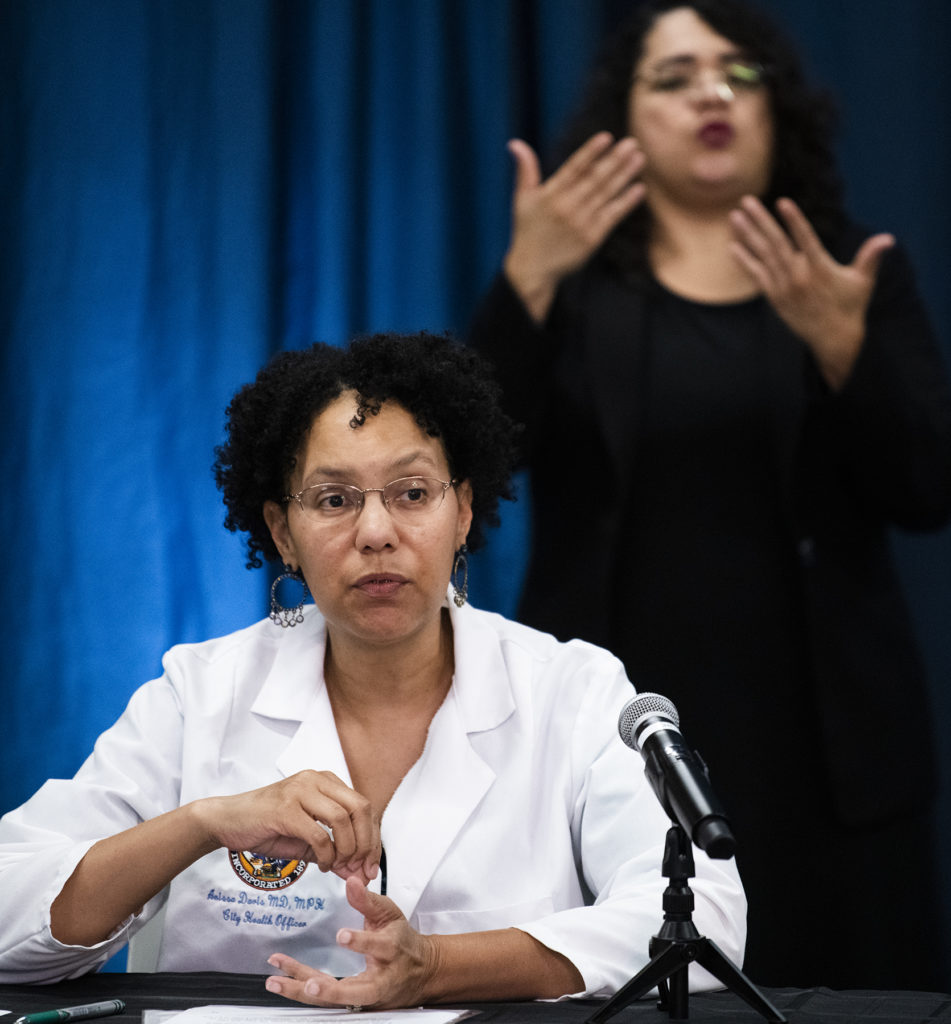 Dr. Anissa Davis, Health Officer for the City of Long Beach, talks during a media conference in Long Beach Friday, May 29, 2020. Photo by Thomas R. Cordova.

Davis said those who have been protesting believe the urgency of the situation outweighs the risks of the virus, that they are “trying to seize a moment because we feel we have to seize it.” She said the civil unrest may not be occurring at the most opportune time but, in reality, COVID-19 and racial injustice are intertwined to the point of being completely entangled.

“Protests and fighting injustices have never come at convenient times or within convenient spaces,” Davis said. “At the time when there was a lot of civil unrest in the 1960s, there were risks: there were dogs, there were guns, there were hoses—there was a significant likelihood you would actually get killed at the protests. And now, the risk of protesting is not just potential violence but putting yourself at risk of contracting this virus that we don’t have treatment for.”

On top of this, public health officials face growing animosity and criticism from those who believe their health orders have gone too far. Dr. Nichole Quick, Orange County’s chief health officer, whose mask ordinance received not just criticism from politicians but direct threats to her well-being, resigned June 9.

“I unquestionably felt horrible about the personal attacks on Dr. Quick and the protests in front her of own home,” Davis said. “I think she’s a great health officer, one that I have looked up to. I think all of us as public health professionals are doing the best we have with the information we have to protect the public’s health. That’s what we’ve all been mandated to do. And as we go about doing that, working tirelessly in this pandemic, with well-known public health infrastructure gaps. It’s well known it’s been underfunded for decades going into this pandemic. It’s just disheartening that some feel the need to criticize us personally.” 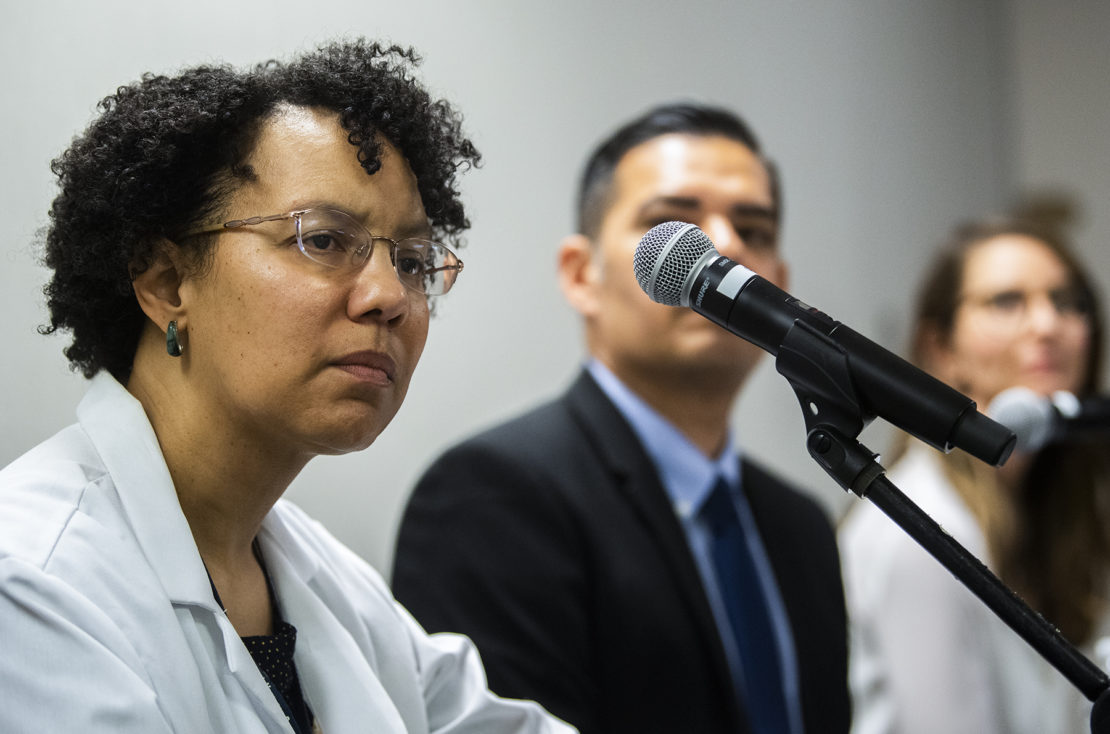 Dr. Anissa Davis, health officer for the city of Long Beach, talks during a media conference along with Long Beach government and health officials about the COVID-19 virus In Long Beach Thursday Feb.27, 2020. Photo by Thomas R. Cordova.

While Davis has said she has not received any threats herself, she acknowledges the “anger connected to this whole situation.” Her concerns increase with any gathering if viewing it through a COVID-19 lens: protests, faith-based services, eating at restaurants, holiday gatherings, these all contribute to any public health officer’s anxiety in a time when data tells them that gathering is dangerous.

“It’s my job as a public health officer to worry about the health of our society, so anxiety is something that is inherently attached to my profession,” Davis said. “For example, I don’t know if there’s anything I am able to say that is going to completely ease someone’s frustration who’s not able to practice their livelihood. That is really, really difficult. I don’t say things surrounding the data we have because I don’t want a business to prosper; it’s because we’re really trying to decrease the risk on society, on our hospitals, to prevent people from dying.”

Though she says she cheers on the innovative ways in which the city has partnered with small businesses to safely navigate socializing, her allegiance sits most with the respectful residents of Long Beach and her Black community.

“As a public health official, to our residents and businesses and all the people who have been affected by the stay-at-home orders and COVID-19,” Davis said, “thank you for abiding by the orders. I know they came at personal hardship and I really appreciate the people who did the right thing, who wear a face-covering. I know that isn’t the most fun thing to do, believe me.

“As a person of color, as a Black woman, I am grateful to my community and all the people of every ethnicity who came out and supported and raised their voices saying, ‘We will no longer tolerate racial injustice in America.’ This is an American problem. Yes, it affects people of color, especially Blacks, but in reality, it affects everyone in this country. Until we deal with that, we as a country will not prosper. So while as a public health official I am very concerned about so many people getting together, as a person of color, it gave me great hope to see so many different people out there—different ages, different races—it just all gave me hope that this next generation is going to make the world better.”