Fox Coffee Shop, the sole indie coffee shop in Long Beach’s Wrigley neighborhood, announced they would be permanently closing with their last day of business being Sunday, Aug. 23.

“Closing Fox has been an extremely difficult decision but unfortunately this year has taken a lot of wonderful small businesses down, including my own,” owner Mary Gallagher told the Post. “I’m so grateful for the six years of business I shared with Wrigley, one of the most charming neighborhoods in Long Beach.”

After Portfolio did away with its ’90s-meets-Bohemian look for a cleaner, contemporary concept, it left two coffee shops in the city that remained true extensions of their neighborhoods in both vibes and looks, while only hinting at going full-on Third Wave: Viento y Agua in Belmont Heights and Fox Coffee House in Wrigley.

Fox eschewed pretense: A Yoskay Yamamoto-painted wall was what welcomed you, along with various rugs that once were fancy and now were cozy. You were met with a fairly large, eclectic menu—from lavender milks and matcha concoctions to an ode to Nutella by way of their Filbert latte—while tending to old-school coffee house vibes with things that are rarely seen in contemporary shops: live music, art shows, poetry readings, open mics…

On top of this, Gallagher’s house made treats that became patron favorites: vegan chocolate chip cookies sat side-by-side with crispy cherry treats and s’mores chocolate cake. Fox was, unquestionably, an extension of Wrigley.

As for the future?

“I’m sure Fox will resurrect in the future, whether I’m slingin’ vegan pastries at a Farmer’s Market or cruisin’ in a Fox Food truck,” Gallagher said. 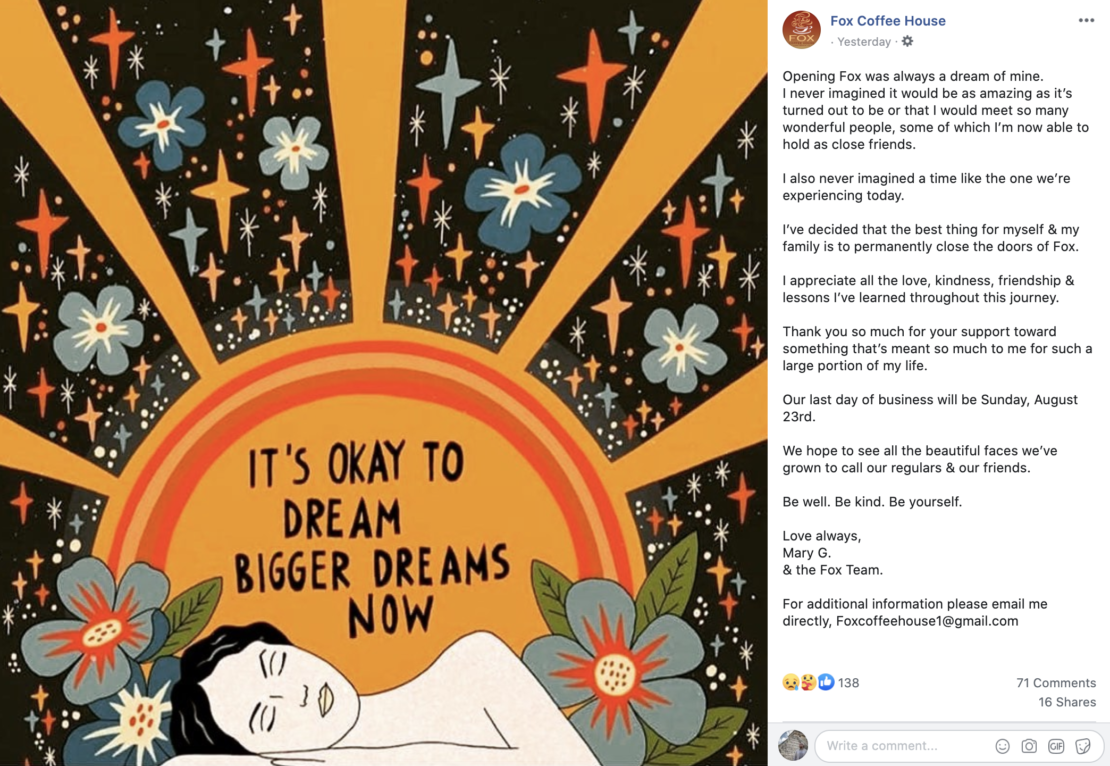