While we are stuck inside, there still should still be no reason as to why we can’t celebrate National Hamburger Day.

While the origins of the almighty burger are surrounded by facts and legends—from stories of Genghis Khan’s horsemen eating flat patties of ground meat to its more commonly known birthplace of Hamburg—there is no doubt that American culture’s thorough embracing of the burger lifted it to new culinary heights.

Since its humble beginning, the burger now sparks intense if not outright foolish debates—In-N-Out versus Anyone often births more authentic passion than debates in our Congress—and has a following that goes well beyond carnivores. Vegetarian and vegan burgers are also altering the way we perceive what has historically been none other than a hand-held meat delivery device.

Here are your essential delivered burgers during the time of COVID.

This has become my favorite burger in Long Beach—and thankfully, even though Ellie’s moving into the Zaferia area, the burger will remain on the menu as the original location converts into Ellie’s Deli.

Thanks to the talents of Chef Jason Witzl, this burger’s epicenter is Flannery grass-fed beef—and he lets the meat speak for itself with a medium-rare wonder. Witzl’s homage to America’s most recognizable food is on par with the creation at Chef Ludo Lefebvre’s Petit Trois on Melrose (which is quite possibly the best burger I’ve ever had en tout).

In other words, it’s a hamburger that is hard to find in Long Beach; true, quality bistro fare that takes a hard ponder to think of when it comes to Long Beach grub. 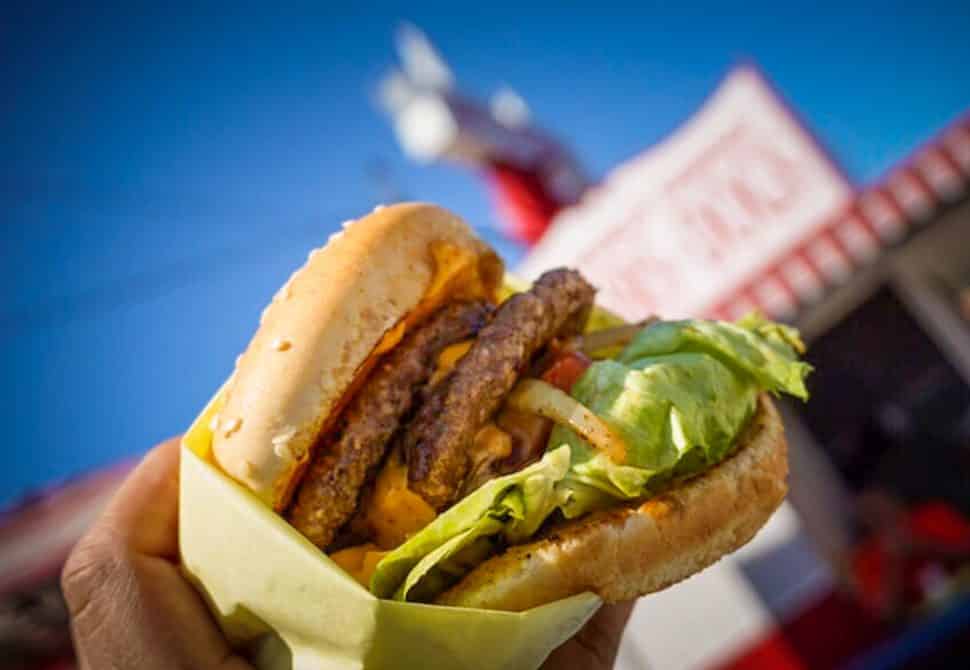 The Double Cheeseburger at Dave’s Burgers. Courtesy of Walter G./Yelp!

This tiny-but-mighty little red-and-white burger shack is one of Long Beach’s hidden gems, a joint filled with the array of burgers that range from classic to gluttonous.

My suggestion? Go classic. Much like In-N-Out (which I think is vastly overrated), Dave’s allows you to add as many patties and slices of cheese as your heart desires, despite not being listed on the menu. (How can one not respect this triple cheeseburger masterpiece?) Here, grilled onions are the norm (you have to request raw onions),

And as for the gluttonous, well, that comes in the form of their Cubby burger: a burger, size of your choice, topped with hot dogs. 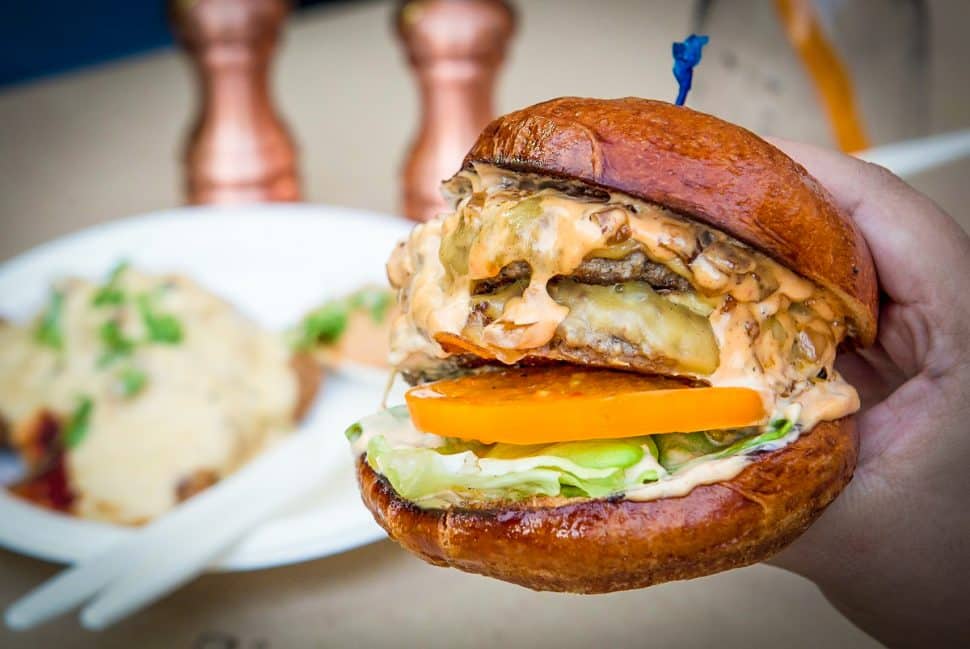 The Piedmont Burger at Prime by Shenandoah. Photo by Edwin Goe.

Order through Seamless, DoorDash, and GrubHub

Prime is one of Long Beach’s most underrated joints—I’ve been clear about that.

And their Piedmont Burger is an example of why they’re underrated. Hearty, flavorful Piedmontese beef—only second in the world for me to Kobe and Chianina—can be stacked singularly or doubly before heirloom tomatoes, smoked gouda, and seasonal veggies are added between a buttery brioche bun.

Probably only second to Ellie’s burger, to be honest… 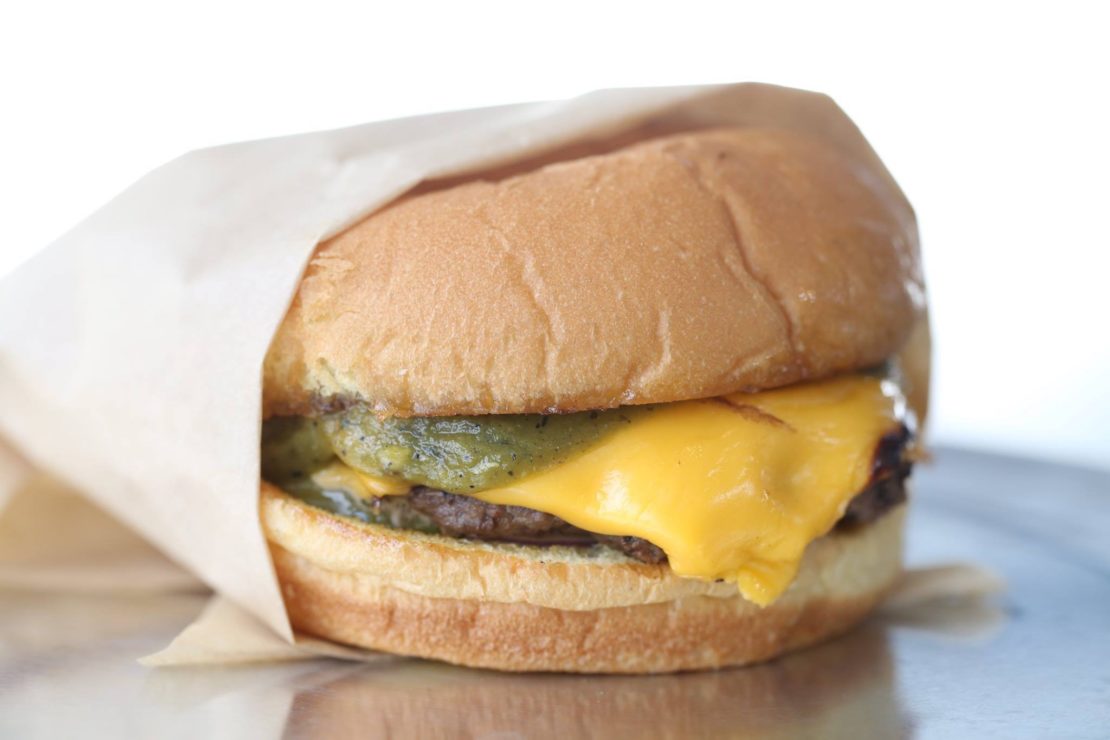 I have long lauded the wonders of Chef Thomas Ortega’s Amor familia—and when he finally reopened both Playa Amor and Amorcito after being closed for nearly two months during the COVID pandemic, I rejoiced.

The man behind “pocho cuisine” serves up some of the city’s best tacos, along with some other wonders like his short rib birria and mole tots.

But one of my more downlow addictions is one of his simplest: Amorcito’s green chile cheeseburger. A wonderfully starchy, buttery potato bun has a grass-fed patty, a garlicky aioli, onion, pickle, ketchup, mustard, and a mound of ground, roasted green chiles atop some melted American cheese. (Yes, American cheese, dammit!) 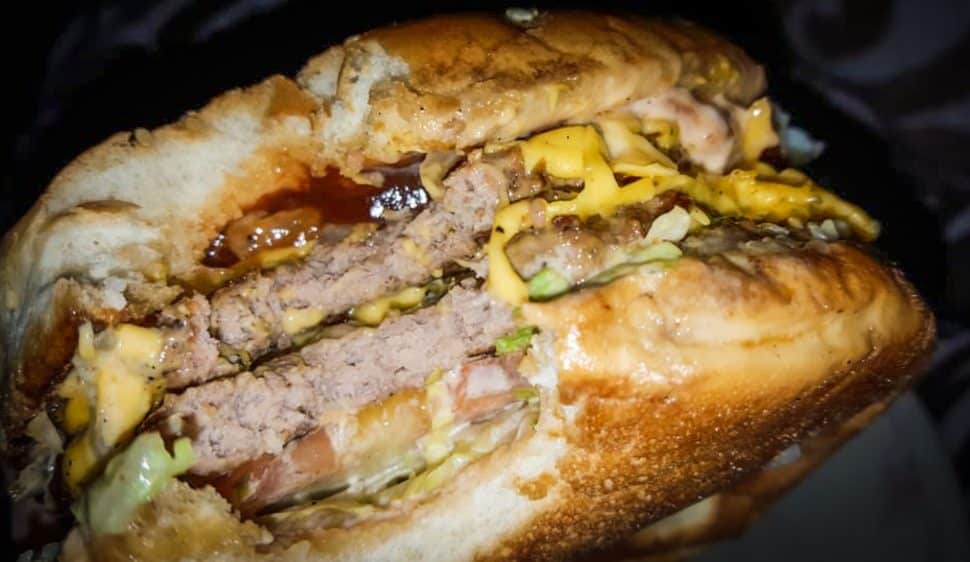 Available through drive-thru and on Postmates and UberEats

This joint is a necessary part of life for anyone who makes this area of Long Beach their home. Nostalgic and diner-y, Golden Burgers harkens to a that old-school, unapologetically American, greasy-spoon of a cafe—but of course, it’s operated by a Mexican family, making it even more awesome than Denny’s could ever dream of being.

And though you can gorge on the impeccable chili cheese pastrami fries for breakfast (make sure to the get the pastrami well-done and share or just go full beached-whale status and get their D.U.I. fries that are lathered in carne asada, chili, pastrami, bacon, jalapenos, and more), their burgers are just outright solid.

My suggestion? The double bacon cheeseburger, an homage that makes one feel fuzzy inside and fat after (and if you reach) completion.