If you’ve ever wondered why so many American diners feature a hefty dose of Greek food—gyro sandwiches, pita wraps, sides of tzatziki—it is largely due to the fact that many Greek-American families found them to be turnkey businesses that became an essential way to both assimilate and makes ends meet.

Brothers Nick and George Stanitsas were no exception in taking that business route, opening the Long Beach Cafe in Downtown Long Beach in July of 1988. For the brothers, having been in the food business since the 1960s, Long Beach Cafe became their American dream: An ode to the old-school diners so common in the 1950s and ’60s, and one that would survive and witness everything from Desert Storm to 9/11 to the economic meltdown of 2008.

In the end, it was a pandemic that brought down Long Beach Cafe—which operated at 615 E. Ocean Blvd.—with Nick announcing in a note on the restaurant’s Yelp! page: “To all our valued customers. We were forced to permanently close due to COVID-19. Thank you for 32 years of your support. —Nick Stanitsas” 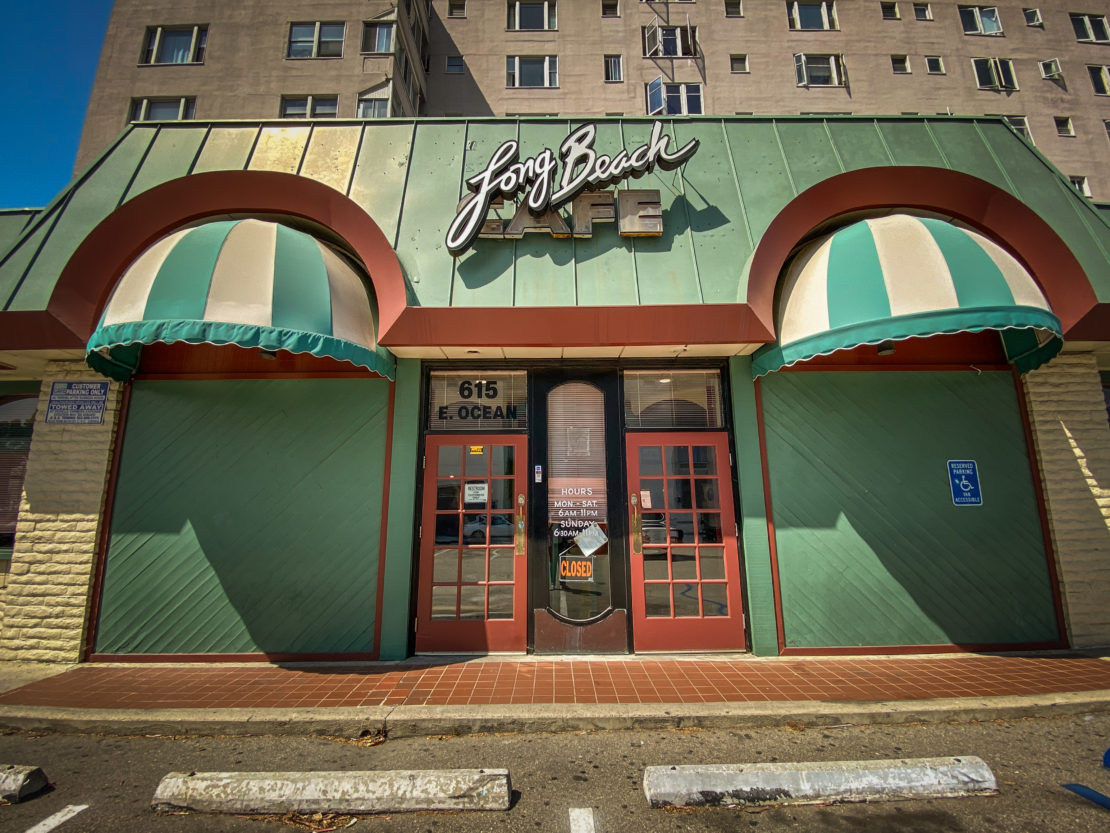 For those not privy to the wonderful Americana-meets-Greek—eventually Mexican—food journey of the Long Beach Cafe, it was a space that exuded the past both culinarily and in attitude. Nick was usually there to greet you with what he described as “Greek hospitality,” a generous spirit of broad smiles and loud gestures, one that would remind a patron of the very same Greek hospitality received from George Loizides at his George’s Greek Cafe just down the street on Pine Avenue. 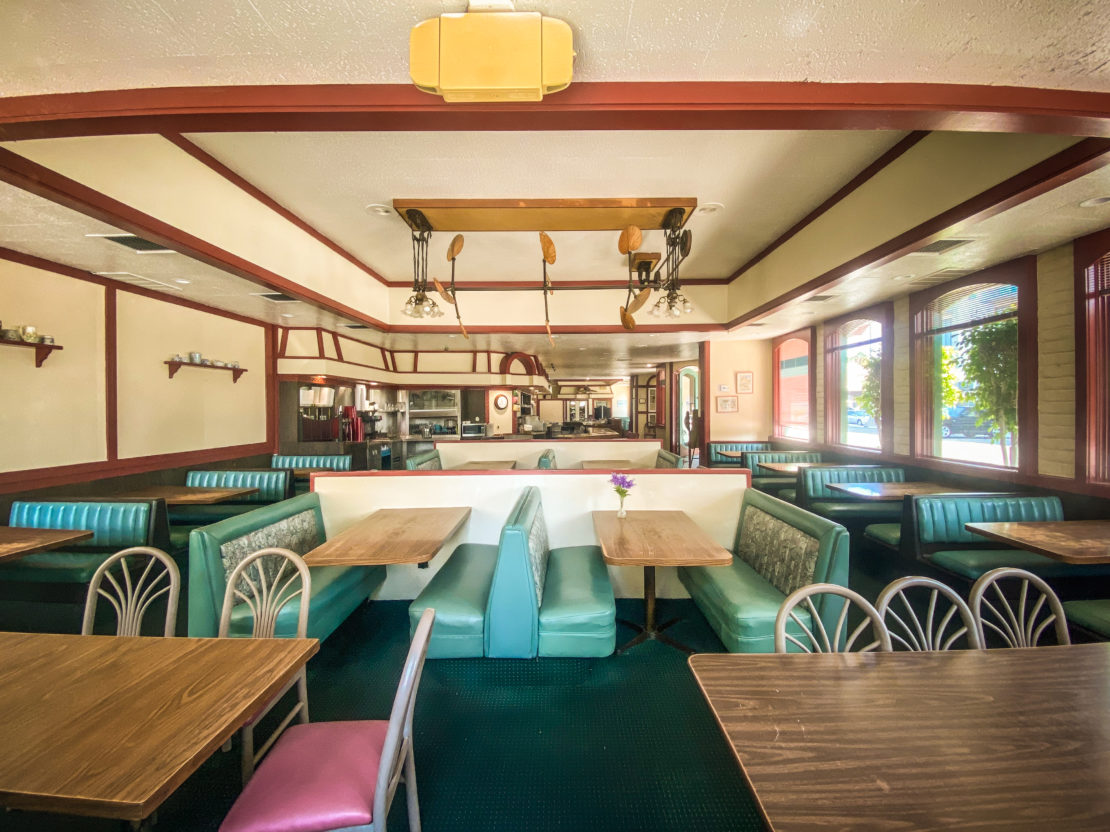 The empty interior of the Long Beach Cafe as seen on Sept. 2, 2020. Photo by Brian Addison.

Green vinyl booths paired with pink vinyl bar stools at a counter flanked the space’s interior; booths that tended to get a comforting nod of recognition and affirmation when taking elderly family members out for a bite.

Once seated, along with the menu and the water glasses came the clinks and clanks of cooks shuffling hash browns, grilling burgers and yelling orders through the delivery window behind the counter.

An overly expansive, wonderfully bloated menu—always paired with a paper kids menu that came with crayons to solve mazes, quizzes and games—showcased beef liver next to souvlaki next to chicken enchiladas next to banana splits. 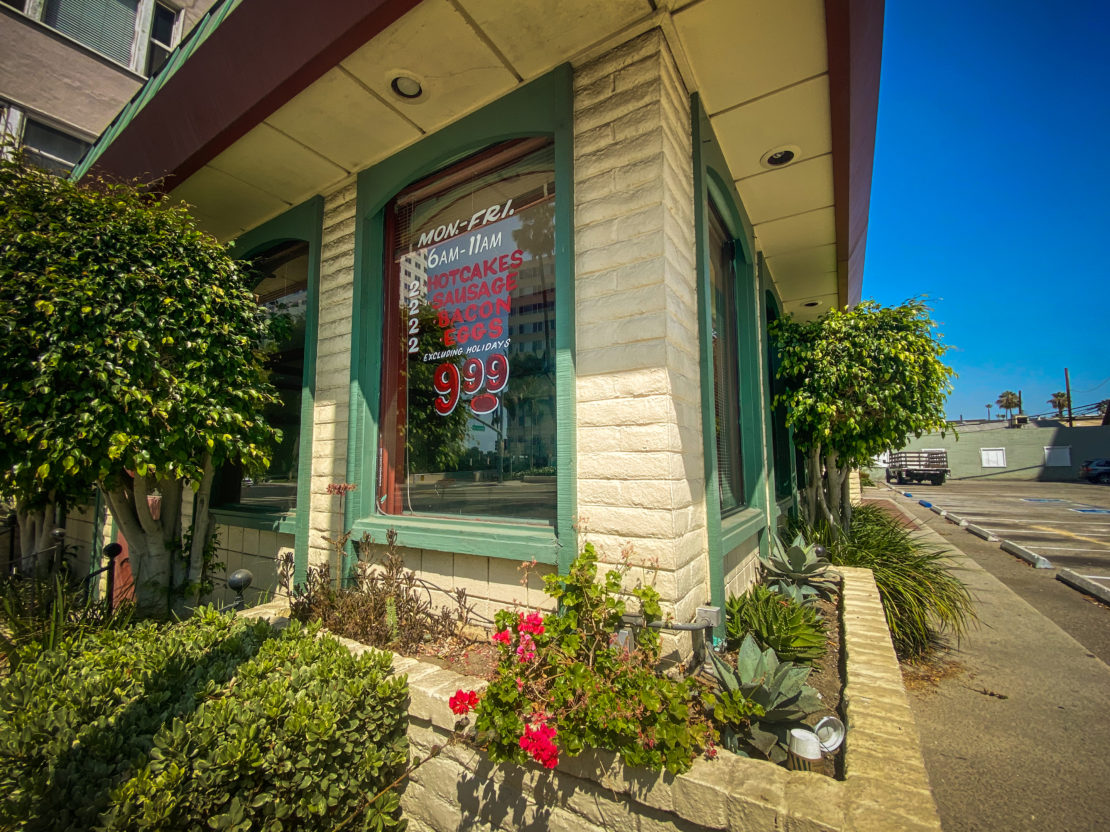 An old hand-painted advertisement on the window of the Long Beach Cafe. As seen on Sept. 2, 2020. Photo by Brian Addison.

Of course, they altered their menu every now and then, like when Nick told the Gazettes four years ago they added jalapeno poppers simply because “customers asked for them.” Ask and you shall receive, a mantra that would likely be met with a sarcastic nod and stare at a lot of contemporary restaurants, but was simply how things functioned at Long Beach Cafe.

Nick has yet to return comment for this story.