Feeling both voiceless in the decision process and lacking in political clout, a group of Long Beach bar owners is organizing in order to save a part of Long Beach culture they say could be eradicated without some form of economic and procedural aid.

The group, Long Beach Bar Coalition, has about 14 members currently who say they believe there are two ways that will lead to recovery: reopening bars with specific guidelines and receiving money from both the city and state. Just as important, they say, is having a seat at the table when these matters are discussed.

“We’ve been completely sidelined in the conversation that directly affects our business and culture,” said Kyle Flavin, owner of the popular Hawk bar on Anaheim Street, as well as the more recently opened Darling’s on Long Beach Blvd. “Perhaps the worst part is that we haven’t even been given a chance to reopen, to prove our worth. And we are not here to say this is anyone’s fault,  the pandemic happened, there’s little we can do about that. But to be able to have a voice would help us from having a massive shutdown of culture across the city.”

Flavin’s dire assessment was echoed by Ilse Benz, owner of Que Sera—one of the city’s most storied small music venues and a staple for queer history in the city; Melissa Etheridge launched her career there—said she has to “make a decision next month” as to whether the 46-year-old institution will permanently close its doors. 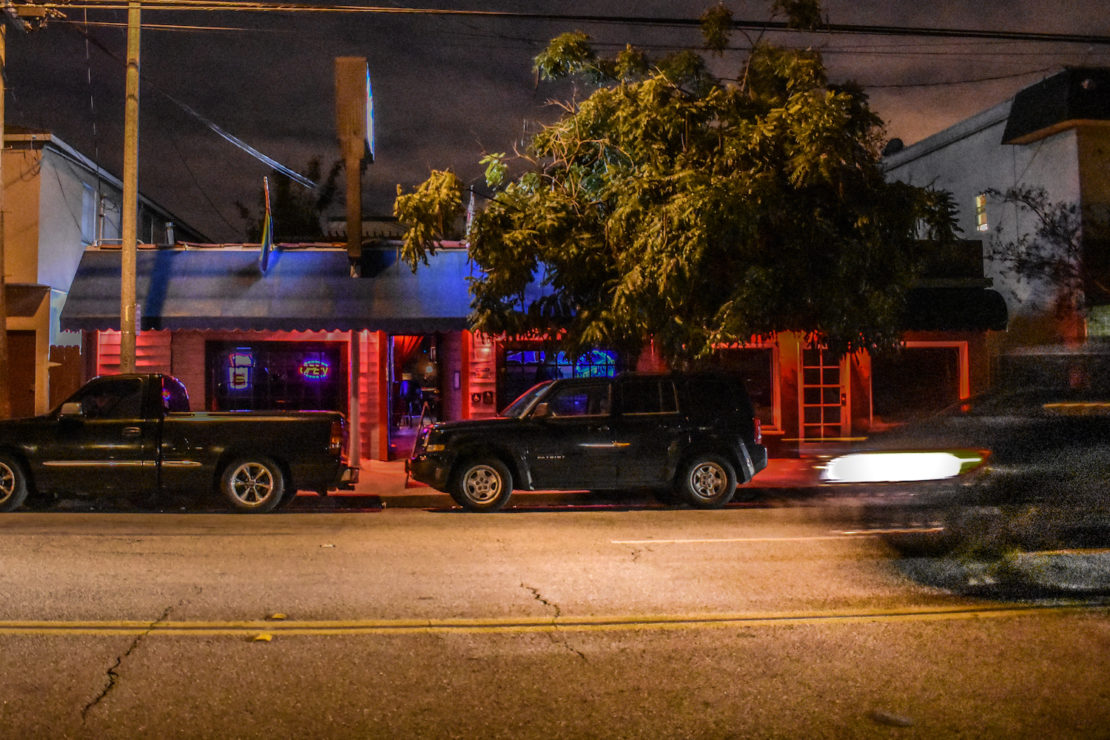 The Brit bar on Broadway has been serving Long Beach’s “Gayborhood” for 38 years. Photo by Brian Addison.

Alex Hernandez of Alex’s Bar, which has celebrated its 20th anniversary while canceling highly anticipated live shows with acts such as The Mummies, said, “We’re at the tipping point and can’t take much more.” Hernandez noted that he cannot wait for possible federal funds to shift after the upcoming election because “we just can’t make it that far. We just can’t.”

Candice Garcia, owner of the famed dive bar that is The V-Room, one of the oldest in the city, said “it’s come to a point where I am not sure we’ll survive.”

The coalition held its first formal meeting, online, with Mayor Robert Garcia, City Manager Tom Modica, Economic Development Director John Keisler and Director of Health & Human Services Kelly Colopy, Monday, Aug. 31, and while participants called city officials understanding and willing to listen, they also were clear with owners that they do not control when bars can reopen.

“We want you to survive,” Garcia said in a recording of the meeting provided to the Post by the coalition. “We are trying to navigate, the best we can, the state system that is in place so we can achieve this as safely as possible. The decision on when things reopen and how they reopen is not up to the city; it is completely guided by the state.”

Garcia noted the state’s new color-coded system and how both L.A. and adjacent counties fall into the most dire of those categories equates to Long Beach is only able to consider reopening barbershops and salons, but not nail salons, dining-in or bars.

“The decision to reopen or not is not a political decision I make or the city manager makes,” Garcia said. “It is a medical decision that the health departments and doctors make based upon the data and science… It does not mean we can’t have some creative conversations to help with your situation but I want to be honest about where are with the state.” 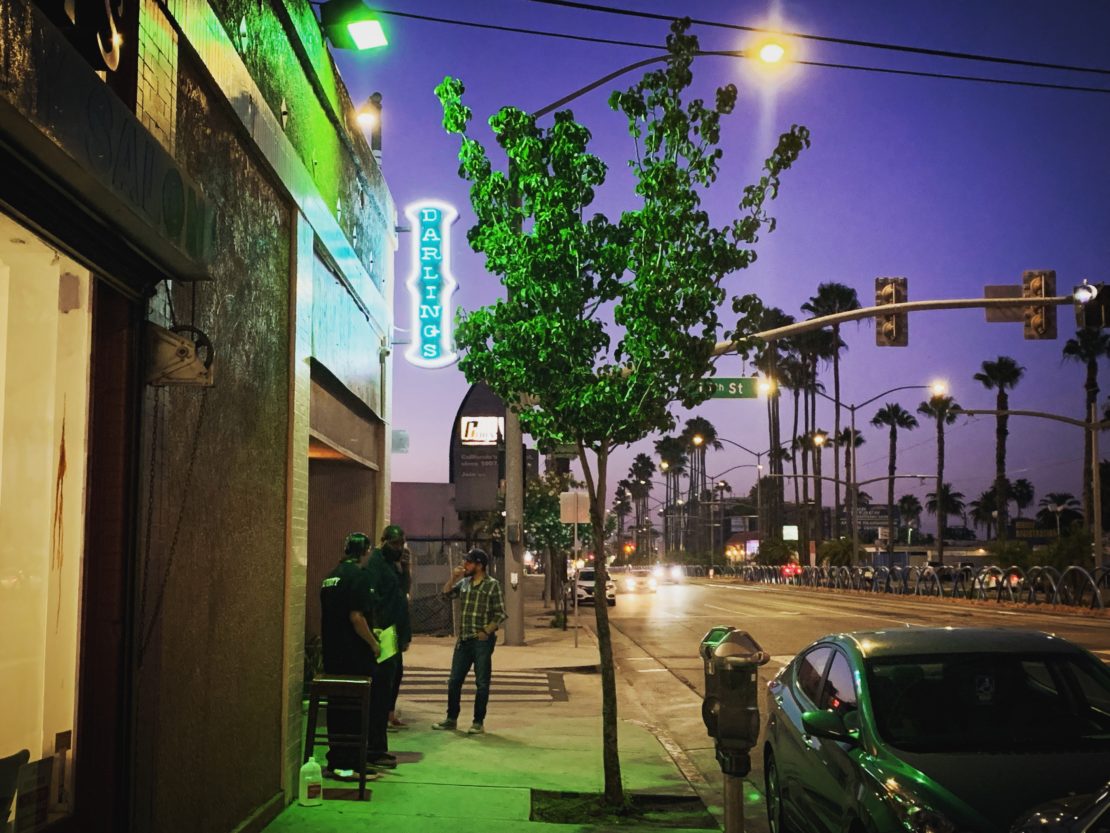 Bar patrons stand outside Darling’s, the newest addition to the family of owners behind The Hawk, on its opening on July 25, 2019. Photo by Brian Addison.

Those direct points from the city were not lost on the bar owners but the highlights about “creative conversations” have become pointed since they are quick to point out that time is limited for their survival.

“As we move forward, asking for access to relief funds, we’re all at the point where we will have to close our doors permanently, if not all us of, a generous portion of us,” said Jim Ritson, owner of 4th Street Vine and Ya Sabes. “We’re trying to think of what we can do to make it and right now, we really need financial assistance.”

In regard to reopening, unlike restaurants or bars with full kitchens, bars—establishments that serve alcohol exclusively—haven’t had the chance to reopen minus a brief reopening stint in June that was quickly closed off. Colopy noted that the issue is that bar patrons tend to linger for long periods, raising public health concerns not associated with restaurants.

“The concern with bars is that when people start to drink, they tend to start talking more, become less cautious, lean in toward other patrons and even hug the people around them,” Colopy said during the meeting. “It is just sort of the experience at bars—and when I’ve talked to other bar owners and bartenders, they say, ‘Yeah, that’s what happens—[patrons] stop paying attention to the rules around them.'”

Colopy noted that a bar has to be “viewed as a restaurant, not a bar,” and that she will “look further” into details to find out if there are ways to bring bars into a situation more in line with restaurants.

As for the other option, Ritson’s point about “access to relief funds” has only a few tangible options, the most obvious would be access to parts of the $40.3 million the city has received via the CARES Act. Much like a similar organization, the Long Beach Restaurant Association, bar owners are hoping that a division of the assistance money the city has received because of the pandemic will be generous toward them. 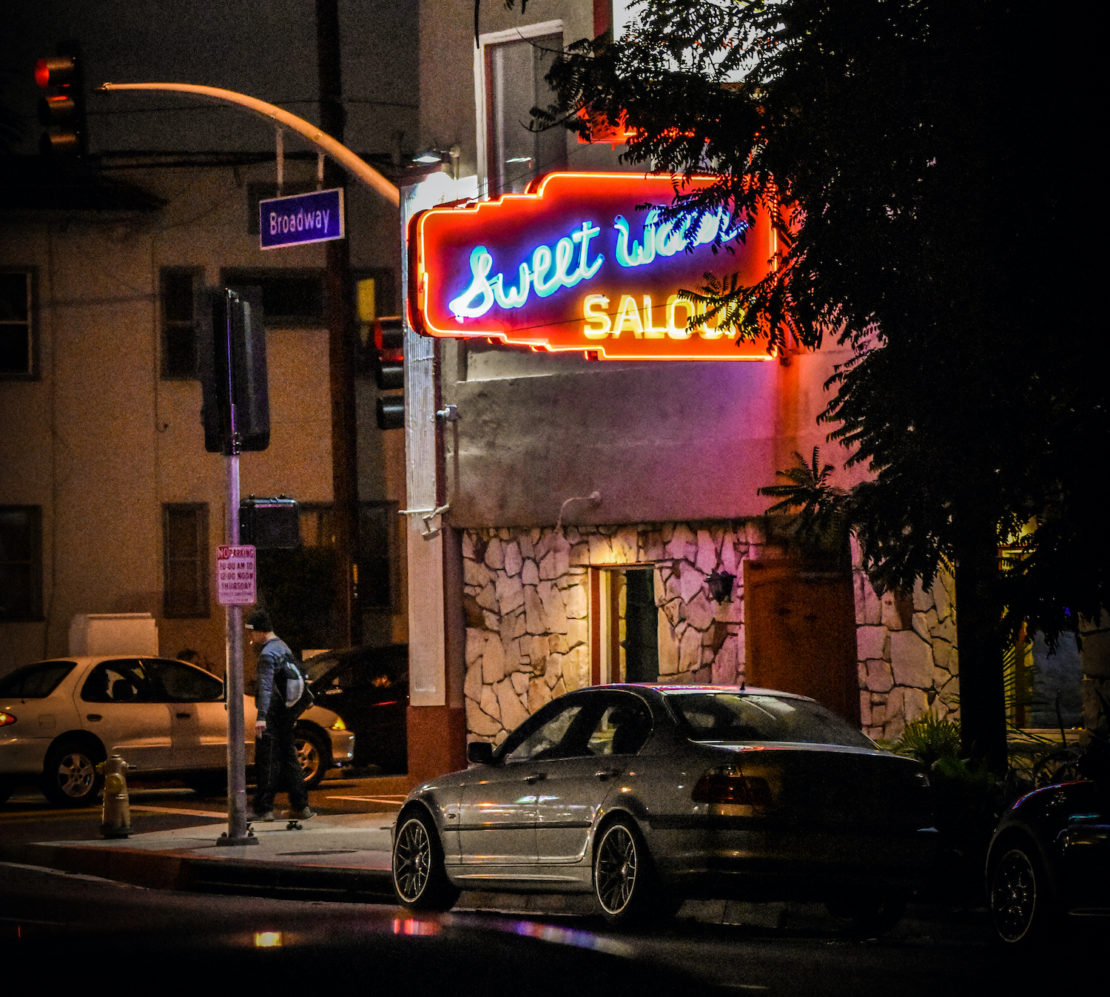 The Sweet Water, one of many queer bars along the Broadway Corridor in Long Beach. Photo by Brian Addison.

“The city has not received that much support from the federal government,” Garcia said Monday. “It is supposed to be used for a variety of things: buy PPE, a lot has been spent on tests—we’ve done 100,000 tests this past month—support the health department, small businesses… There’s a million uses for that money.”

Keisler noted that owners were just “days away” from having access to a grant application process for small businesses, something that could very well help them as well as other small businesses.

Still, some owners believe a significant part of Long Beach’s culture, what Danny Paige of the 3636 Club in Belmont Heights called “bigger than booze,” is on the verge of disappearing.

“For me, it’s about the culture of our businesses,” said Jeff Darling, owner of the Mineshaft and the Brit in the Gayborhood, and landlord of the building that houses Black bar on Broadway. “These are people’s second homes. Gay bars? They are often the place where many in the neighborhood we operate in feel comfortable—and they have been effectively siphoned off from that comfort. Do people across the city know what situation we are in? Do they know that when the state, if they ever do, decides to reopen bars, a lot of us won’t even be here?”

Those sentiments about the value of bar culture in Long Beach—one which extends from the dive bar and queer bar to the mini-music venue and entertainment space—were echoed by Garcia.

“I want you to personally know that bars and clubs are a lifeline of the culture in this city and make this city a place where people want to live,” Garcia said. “For some communities—I know the folks at the Brit and Mineshaft know this—these bars are the only spaces where some of us feel genuinely safe. They are an essential part of this city—and we will do whatever is within our power to get you reopened safely.”