City leaders this week approved a plan to temporarily close certain streets across the city until Oct. 31, providing residents and businesses with additional space in the COVID world.

The plan, called the “Open Streets Initiative,” includes the expansion of dining space for restaurants in some business corridors, as well as closing neighborhood streets to vehicle traffic for recreational use, similar to what the city has done as part of its “Beach Streets” initiative.

“Kids and adults alike are encouraged to get outside and enjoy physical activity while practicing safe, physical distancing,” said Craig Beck, director of Public Works.

Some questions were raised at Tuesday’s council meeting about the process for choosing which streets to close. Beck acknowledged in an interview this week that this will be a process, and that “one-size does not fit all locations, so modifications will likely be made as this is rolled out.”

The closures reflect the city’s popular and much larger Beach Streets events, but limited to a smaller, more neighborhood scale, officials said.

“The Open Streets initiative is an opportunity to reimagine public infrastructure as more than simply a means of moving vehicles, but rather a platform for public health, commerce, and community,” Councilman Rex Richardson told the Post. “It is also a great way to achieve equity as it relates to open space and the environment, if designed with those values in mind.”

For the open streets initiative, the roadways involved will be closed daily from 9 a.m. to 5 p.m., allowing people to walk, bike, skate and use any other non-motorized forms of transportation in spaces that will allow for easy social distancing practices.

This proposal met with some criticism, such as how residents would be able to access their neighborhoods during closures. Beck said that “neighborhood access for residents will not be impacted as a result of this program,” assuring that residents will have access in and out of their homes as needed. Additionally, he said Public Works staff will “work with residents and businesses on an ongoing basis to outline approved activities and address any concerns.”

Councilwoman Stacy Mungo, who represents East Long Beach, expressed multiple concerns, one being that neighbors were concerned that rates of COVID-19 cases could unintentionally spike should it be advertised that their streets are closed for public leisure and therefore attract others to the area.

Secondly, she was concerned that decisions on closures were made without input from the communities they impact, emphasizing that the success of Beach Streets was largely due to significant community outreach.

“I feel this was kind of rushed in this case,” Mungo said, adding that the original vision seemed to be geared toward commercial corridors—giving restaurants more room to serve diners—rather than neighborhoods.

Other councilmembers expressed the same confusion over the aim of the program.

“The public felt this was geared toward outdoor dining and I was under that impression as well,” said Councilman Dee Andrews, represents Central Long Beach.

Just four of the 27 proposed street closures are directly connected to restaurants, three of them in Bixby Knolls:

Beck noted that the department had to take into consideration traffic concerns and focus on low-volume streets that would be conducive to outdoor activity, hence why no major arterials such as Fourth Street, home to Retro Row’s stretch of restaurants, or Pine Avenue, home to many Downtown eateries, were proposed by Public Works.

Additionally, both Mungo and Councilman Al Austin, who represents Bixby Knolls and parts of North Long Beach, said there was a lack of flexibility in the closures. Austin strongly recommended letting business districts and residents have “flexibility in expanding or shortening hours so they can best use these street closures to their benefit.”

Multiple councilmembers noted other streets they would like to be considered for closure as well as amendments and removals:

While Beck welcomed the suggestions, he noted that he was presenting these street closures on behalf of Public Works to only include “low-volume traffic” closures, meaning arterials like Pine Avenue and Fourth Street would require permits and are “not part of the discussion we’re having right now.”

Secondly, Public Works is limited in resources, both physically—there isn’t an endless supply of protective barriers like k-rails to ensure all proposals are met—and in terms of labor. He said this means there are no guarantees that every street suggested will see a closure.

Due to limited resources, there are no guarantees that any given street will be closed, but Beck and his staff plan on returning to each City Council office to get formal priorities on which streets they would prefer to see closed.

The full list of proposed street closures in the initial item included: 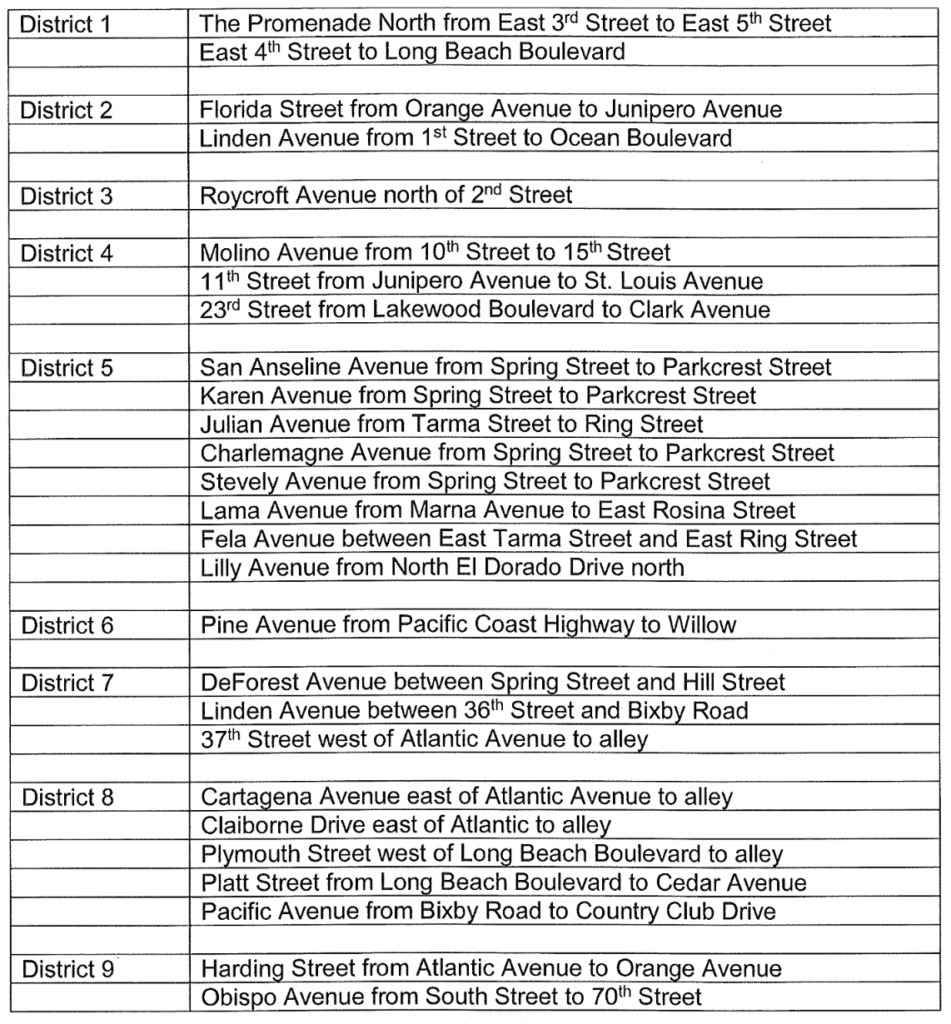 Courtesy of the City of Long Beach.