Parklets are proving successful, now restaurateurs want them for good • the Hi-lo
- ADVERTISEMENT -

While Los Angeles Mayor Eric Garcetti recently announced he would be extending that city’s al fresco dining program, until the end of the year, at least, Long Beach restaurateurs are concerned that our own Open Streets Initiative, which allowed restaurants to set up temporary parklet space to accommodate outdoor dining, will not get the same treatment.

The Long Beach City Council, when approving the program, set an expiration date of Oct. 31., leaving many restaurant owners to question why the program hasn’t already been extended? Even more, why can’t this be made a permanent part of the city’s food scene?

“We’ve been adapting as much as we can, but we really need assurance that we have the ability to keep moving forward,” said Michael Dene, owner of the Michael Restaurant Group, home to four (Michaels on Naples, Michaels Downtown, Michaels Pizzeria, Chianina) Long Beach dining establishments. “We are in a tough situation with the outdoor dining. The parklets have helped us tremendously and the city is about to close them down.”

Dene is part of a growing group of restaurateurs who want to see the program extended at least into 2021 and, ideally, on a more permanent level.

The Second Street stretch from the Shore to Naples, for example, has seen an influx of on-foot patronage that it hasn’t seen in a while, prompting the business arterial to reexamine what it needs for more stability. And parklets have proven to be an answer that makes things feel different but welcoming and, regarding COVID-19, safer.

“Parklets have been our only lifeline and everyone loves it because you feel like you’re in a different place,” said George Mlouk, owner of Nico’s in Naples. “Amazingly, no problems. Everyone is behaving, everyone is enjoying themselves.”

And it’s not just restaurateurs in Naples or Belmont Shore. 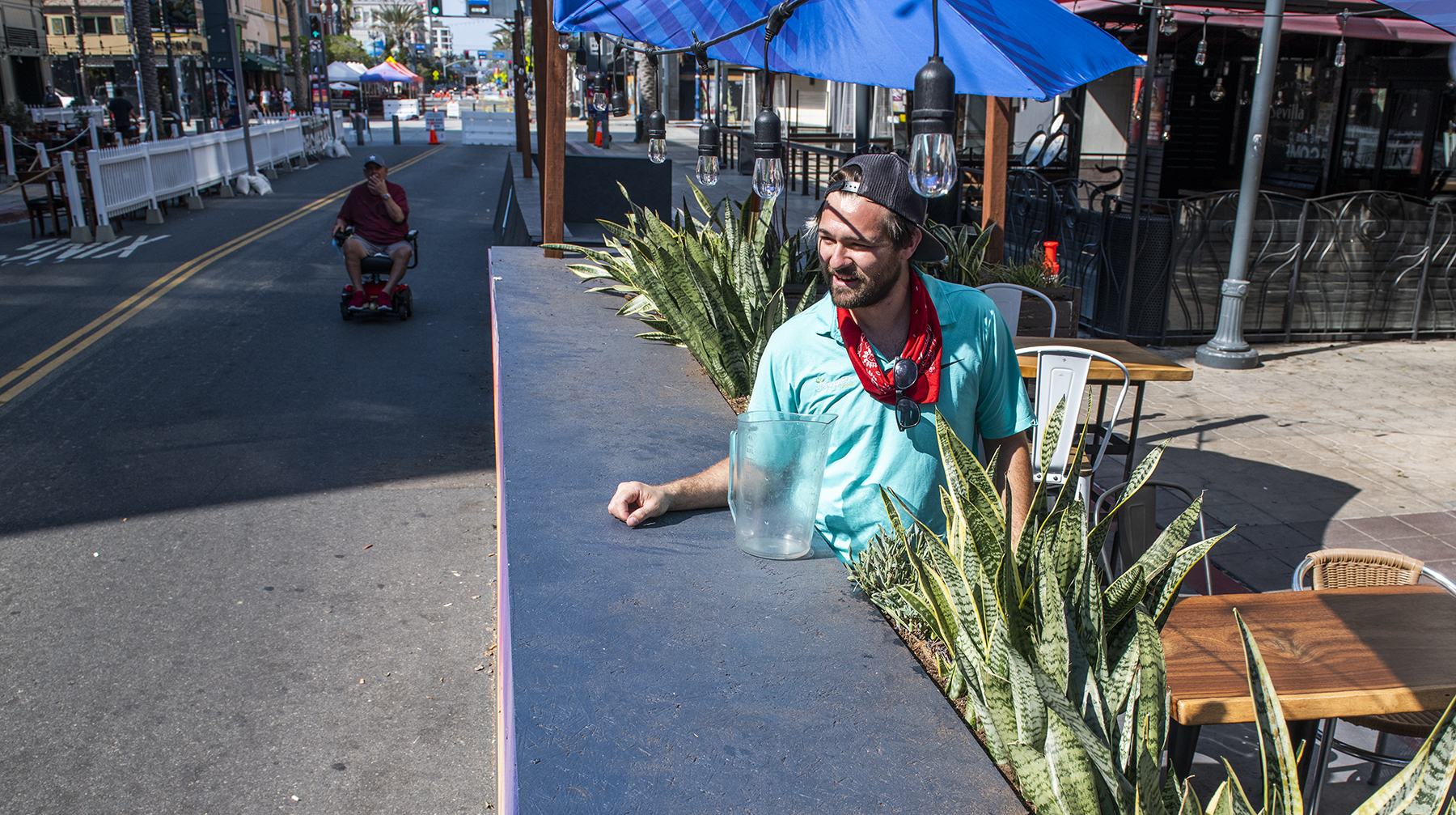 Jake Briggs finishes watering plants at The Harbor restaurant parklet on Pine Avenue which he built while having a breath from outside his mask as he awaits customers. Photo by Thomas R. Cordova.

Levi Fried, owner of the Long Beach Beer Lab in Wrigley, has said that the extension of their patio has been “hugely helpful.”

Lorenzo Motolla, owner of Vino e Cucina in East Long Beach, was able to set up seven tables outside thanks to the program, something he says was essential in keeping his business alive and would “invest in a full-on parklet if they were able to become a permanent part of Vino e Cucina.”

Steve Guillen, who bought DiPiazza’s over by Park Estates after its original owners stepped down, “completely agrees” that parklets and outdoor dining extensions have been essential in bringing in patrons.

The city doesn’t necessarily disagree, with City Manager Tom Modica telling the Post that the city will reassess the termination date of the program after coordinating with businesses to figure out the best way to move forward.

“We are open to continuing what is working well if there is a need for it,” Modica said. “So far, we are hearing very positive things about the program from both businesses and patrons. We will have a recommendation in late September or early October [on the possible extension of the program], as well as assessing the future State Order to see if there are any differences that allow more normal operations.”

When faced with the idea of parklet permanence, things can become a good deal more complicated and, sometimes, angry. For instance, parking-impacted neighborhoods are likely to find the permanent utilization of much-needed parking spots to make way for parklets as an outrageous tradeoff. Permanent parklets would also involve formal permitting, signing off from Public Works and investment in a sound parklet design that could withstand potential impacts if ran into by a distracted driver. On top of that, permanent parklets are not cheap, better designed ones can run up to $25,000, according to Anastasia Loukaitou-Sideris, professor at the UCLA Department of Urban Planning, who studied parklets extensively.

Still, it’s a measure of how successful the parklets have been that many restaurateurs are willing to fork out the cash if it means cultivating Long Beach’s culinary scene.

“I would be more than happy to pay the permitting and whatever else if required to keep my current situation,” K.C. Branaghan’s Ryan Hoover said. “What I’d like to see is the street speed limit brought down, have these parklets become a permanent part of our dining scene—and I understand there are hefty things to make permanent parklets structurally sound but I am willing to pay for it and build it if it means I can hold onto it.”

Some are still waiting on their first parklets.

“I would love for the city to actually put some up in Bixby Knolls, however, they won’t let us do it,” said Jason Van Fleet, owner of Dutch’s Brewhouse, who was allowed to open an alley space for outdoor dining five buildings away but not a parklet directly in front of his business. “I went from 60 seats in my restaurant to 18 seats outdoor. It’s just not sustainable and it’s unfortunate the city will not take any efforts to slow down traffic on  Atlantic Avenue and let us have parklets on Atlantic itself… Just not sure I can stick around long enough to see it come to fruition if we don’t get a little bit of love and respect up in here.” 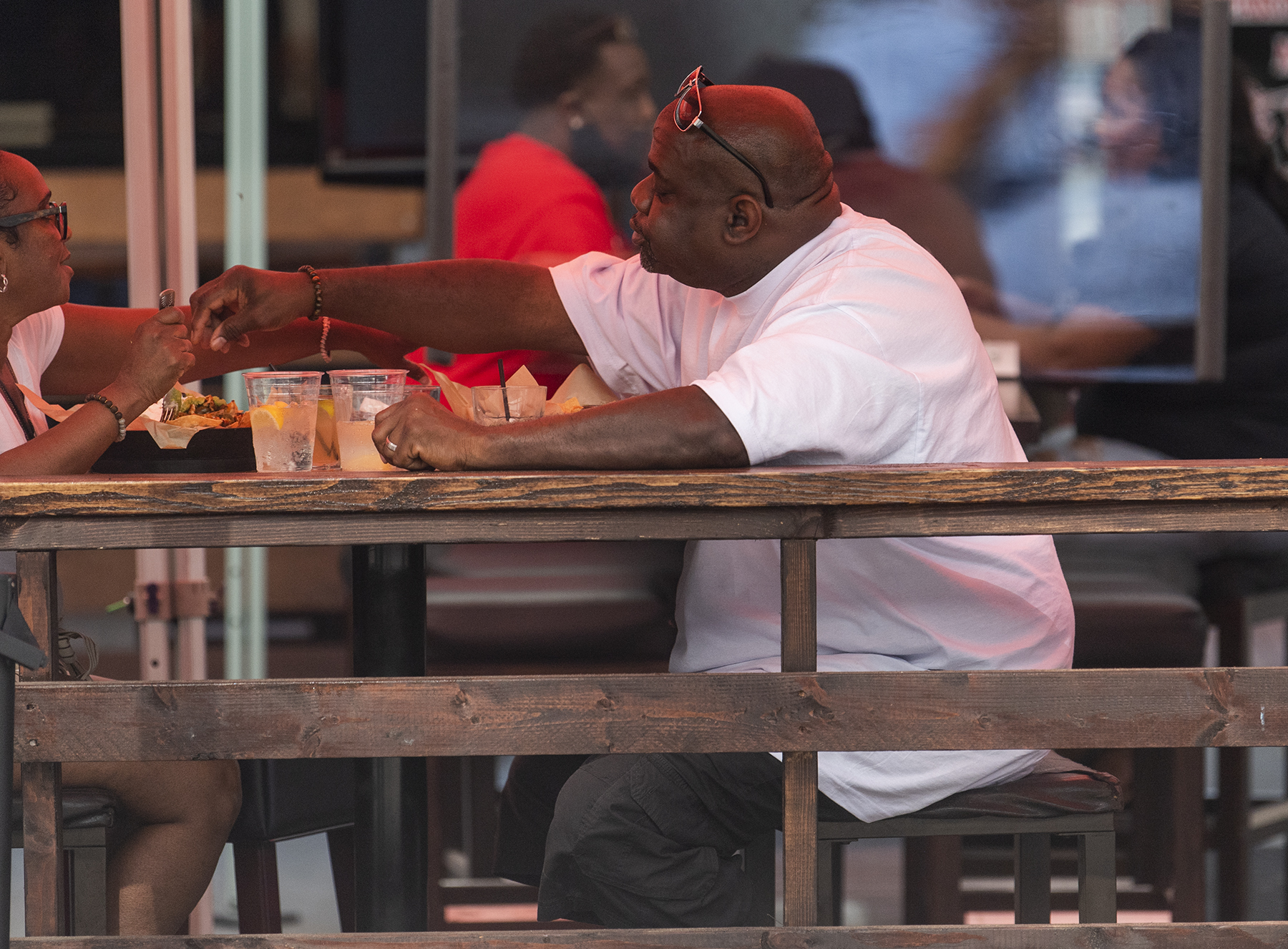 A couple enjoys their food as they sit in the Taco Shack parklet in Long Beach Tuesday, August 25, 2020. Restaurants along Pine Avenue want to keep their parklets permanent. Photo by Thomas R. Cordova.

Even more, some believe the change has already created a culture all its own. As some 80-plus parklet/open street spaces have been created across the city for both restaurants and neighborhoods, many patrons are getting used to the idea that food can always be enjoyed outside, weather permitting—and it usually does.

“What’s been created is a change to the dining experience,” said K.C. Branaghan’s Hoover. “Beforehand, most people were content with indoor dining: A little seating, a bar over there, some fresh windows… But with people continuously going outside now, it’s completely changed what people expect within dining. What these parklets have created is a standard, and the possibility of having that rug pulled from beneath us is a travesty.”