What happens when customers bring the stress, but not a mask • the Hi-lo SHIPWRECKED, Part II: How Long Beach leaders charted a disastrous course for the Queen Mary READ NOW
- ADVERTISEMENT -

For restaurant owners and their staffs, there is a hefty amount of stress to assure both their own safety and the safety of their patrons in the world of COVID: Spraying down tables, keeping people away from each other, limiting contact with digital menus customers can check via QR codes on their phones. This on top of having been closed for months, reopening at limited capacity and forcing themselves to examine every expense and distribution order so as to keep their employees paid and doors open.

And on the other side, the customer.

The customer can either help with the stress by understanding that limited capacity means limited workforce, and by being patient and respecting the rules—yes, you have to put your mask on when you’re not eating and that includes going to the bathroom. They can add to the stress of the situation by not only politicizing health code mandates—a surefire way to amp up the anxiety of already nervous servers and small business owners—but by refusing to abide by rules that the owner and staff have no formal say in.

This is the tale of two customers. 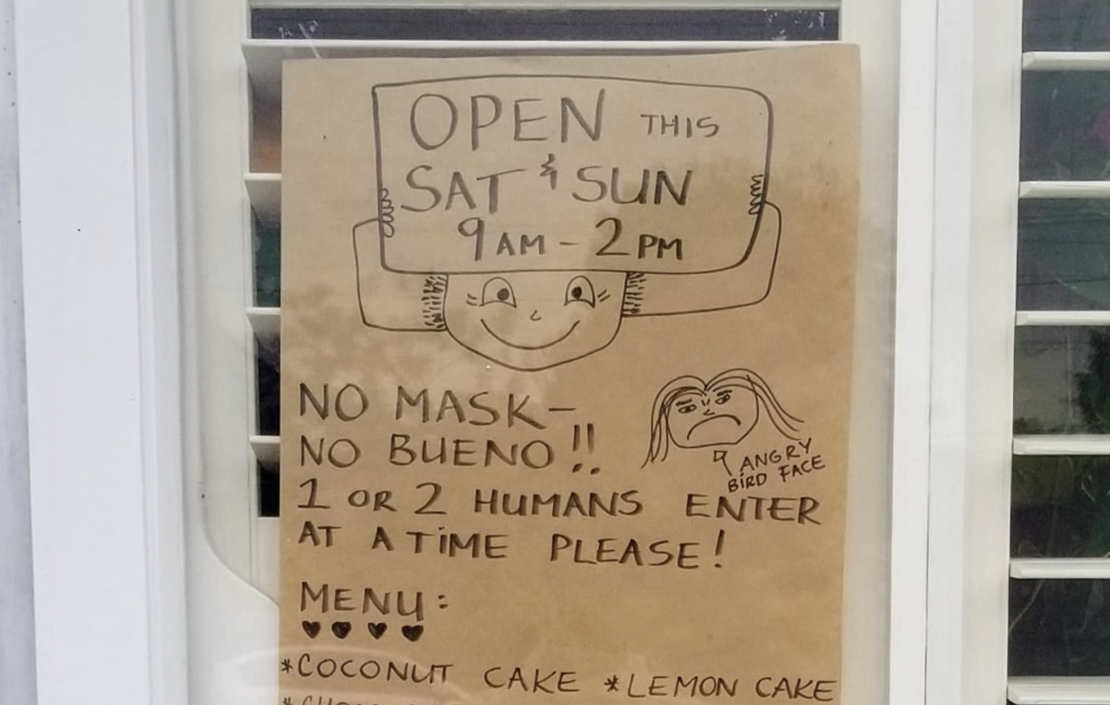 A sign outside Happy Cow Kitchen on Redondo Avenue lays out the rules for customers. Photo by Chris Miller.

“I get told at least once a day, ‘F*** you!’ or, ‘F*** off!’ just for asking the guest to wear a mask while ordering or being inside the building,” said server Marisa Vigenski, who works at a quick-service Asian restaurant in Long Beach. “As time goes on, I find guests have become more and more rude, and don’t care about the health and safety of themselves or others. It makes me lose faith in humanity on the daily.”

“Stephanie D.,” as identified by the Yelp! account she created to solely discuss her experience, left a one-star review—which she would “give 0 stars if I could”—on the page for Portuguese Bend Distillery after the staff refused to let her join a party reservation without a mask.

“It was unreal,” said co-owner Brenda Rivera. “My employee was kind and respectful, but firm: ‘Unfortunately, we cannot allow you to dine with us without a mask.’ This isn’t to mention the party reservation had already arrived and we are very hesitant to seat tables that could be from different households, which we sensed with this table. She then went on Yelp!, created an account right then and there, and gave us a one-star review because of the situation.”

Another patron left a one-star review because servers asked him to not sit in an area made unavailable to customers in order to maintain social distancing.

“It’s frustrating when I’m running around greeting, seating, bussing and sanitizing, all while wearing a mask and shield just to have someone leave a one-star review because I wouldn’t let them in without a mask,” said Monica Punjabi, hostess at Padre in Downtown Long Beach. “And then, to top it all off, being called ‘unwelcoming,’ ‘disrespectful,’ and ‘rude’ in the review. Thankfully, management has our backs, but still… ”

At Congregation Ale House on The Promenade, owner Travis Ensling has done his best to assure customers feel safe: Inside-dining was not permitted—even during the brief period in June where it was legally allowed—and the outdoor patio space is equipped with plexiglass sheets physically separating tables from one another. Still, some customers became so abusive that Ensling had to create new signs that read:

MASKS ARE MANDATORY. Staff has our support to not debate any guest not wearing a mask about our policy; they will simply refuse service to remain safe. Please re-don a mask while seated as the staff delivers food and drinks to your table—it only takes seconds! This only works if all souls are working together.

“We thankfully haven’t had any physical altercations or spitting,” Ensling said. “But the situations have been confrontational enough that it’s made my staff feel genuinely uneasy.” 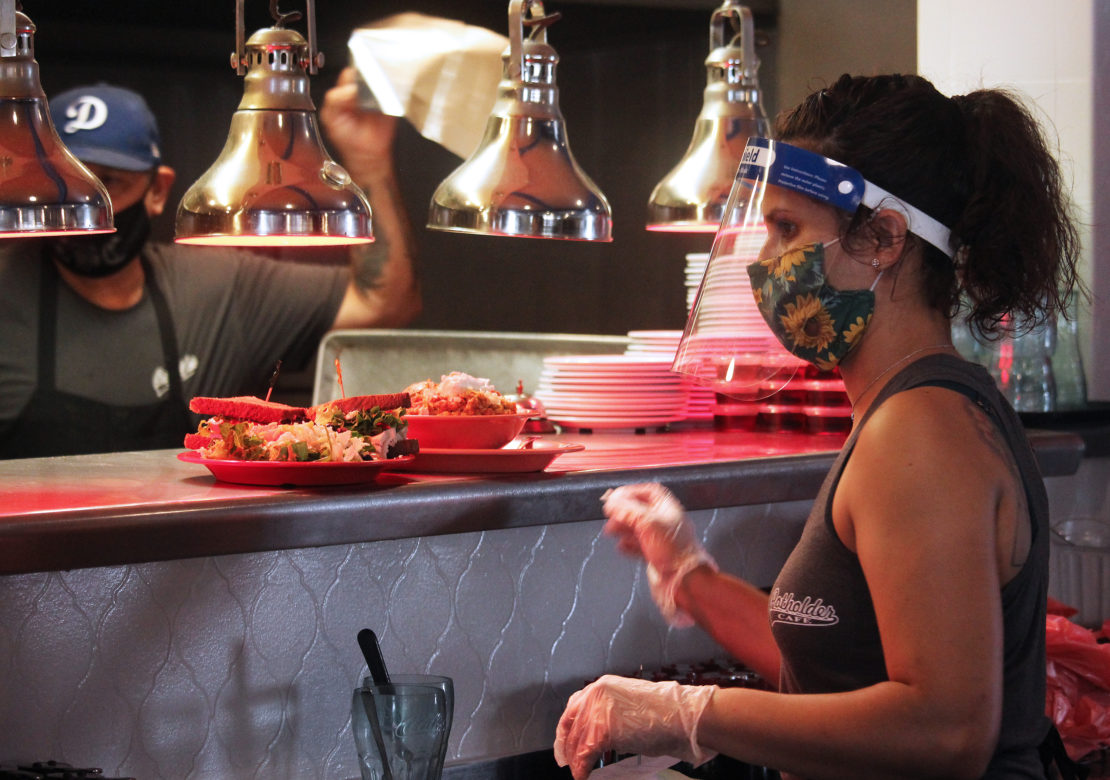 These belittling situations, of course, are in stark contrast to the thoughtful and considerate interactions happening at other dining spaces.

“We have been lucky because, in all honesty, it really has been a non-issue,” said David Copley, owner of Auld Dubliner. “There have been a few objections here and there, but not many across the platforms—and if they leave, they leave. Signage is prominent that masks are required at all entrances. Like I said, I think we are lucky because I have heard the stories.”

Carl Dene, owner of Michael’s Downtown, echoes this sentiment and attributes the civility to the possibility that they have remained opened throughout the entirety of the pandemic. From the get-go, they operated as a marketplace and immediately reopened when dining out became an option, increasing regular interactions with patrons.

“Almost every single person walking through the door comes through with the mask and has been pretty respectful to the staff,” Dene said. “I had our rules in place since Day One and everybody’s been very respectful to us. We’ve been very fortunate in that arena.”

Ismael Miramontes, owner of the relatively new La Chancla space, joked that if someone were to spit on an employee, he would “be on World Star for sure.” But ultimately, customers are “really OK following regulations.”

Sura Korean BBQ owner Brandon Kim says Long Beach has been “really good to us,” where customers have had their temperature checked and masks on at every moment outside of eating and drinking—all with little to no retort.

Some servers have even been recognized for working during a pandemic: Holland Thomas, a server at The 908 in East Long Beach, saw tips as high as 50% in a show of respect from a customer, though that doesn’t discount the tension.

“I haven’t seen any unruly people but it is weird how many people want to have political conversations with me—their server—about masks,” Thomas said. “I will say that some tables have been particularly awesome: They always put their masks back on when I was near and would leave me a great tip—like $40 on an $80 bill.”

What this situation ultimately comes down to is a common show of respect; the mask and its accompanying rules being followed is an immediate show of common respect between servers, chefs, small business owners, and their customers. The situation we find ourselves in is anything but ideal—and people are definitively itching to return to some sense of normalcy.

“It’s like people are just fixated on wanting to break the rules like going inside, especially at our restaurant that’s been doing take-out only before we just opened our patio,” said Long Beach resident Mallory Alden, who works at the Costa Mesa location of vegan favorite, Seabirds. “They keep walking inside despite signs posted everywhere that absolutely no guests are allowed inside.”

These attempts to return to normalcy—like walking into restaurants because one used to be able to do just that—by breaking the rules isn’t just selfish but ignores the other end of that interaction: Long after you’ve gone, argued with a server about wearing a mask or staying inside, and posted your one-star review, that server then has to explain the situation to their manager or the owner. That owner then has to look into the validity of the situation because those one-star reviews—reviews you wrote solely because you couldn’t follow a legally mandated health order—affect business.

It doesn’t just stop with your experience; it can affect an entire restaurant’s ecosystem and bank account—which is perhaps why the words of a respectful customer like Long Beach resident and avid restaurant-goer Kim Kavanagh Delaney ring so true.

“The few times I have ventured out since restaurants reopened for dining in, I remind my self to do a few things,” Delaney said. “I remember to ask for everything at once—meaning condiments, pickles, a drink refill, extra napkins. This saves the server from having to run back and forth and limits the exposure for both of us. But, if they want to chit chat, I am glad to engage. These are hard working folks who are there for us and the least I can do is be pleasant and courteous and respectful.”