This lauded O.C. chef is opening his first Long Beach restaurant amid a crisis • the Hi-lo
- ADVERTISEMENT -

With his first service at his first restaurant in Long Beach behind him this past weekend, Chef Ross Pangilinan can momentarily breathe.

The La Mirada native and master of the kitchen that brought much-deserved love to his seamless blend of styles at Mix Mix Kitchen in Santa Ana and later Mix Mix Terrace in Costa Mesa, has finally moved past the idea that his Long Beach restaurant Remix could be open and can now view it as certain—though that wasn’t always the case.

Just one week before the coronavirus pandemic hit, he was 100% ready to introduce his cuisine to Long Beach with his first restaurant venture beyond the Orange Curtain.

Remix, taking over another space in the food lover’s paradise that is the Long Beach Exchange, was finished. The build-out did experience the requisite few hiccups as new spaces tend to but it was ready to open. And then…

“At first, we were prepared and then things began shifting,” Pangilinan said. “So we figured, ‘Okay, we can handle this social distancing thing, operate at half capacity.’ And then the news came that we couldn’t have diners at all. We had an entirely new space, ready to go, with no one to serve.” 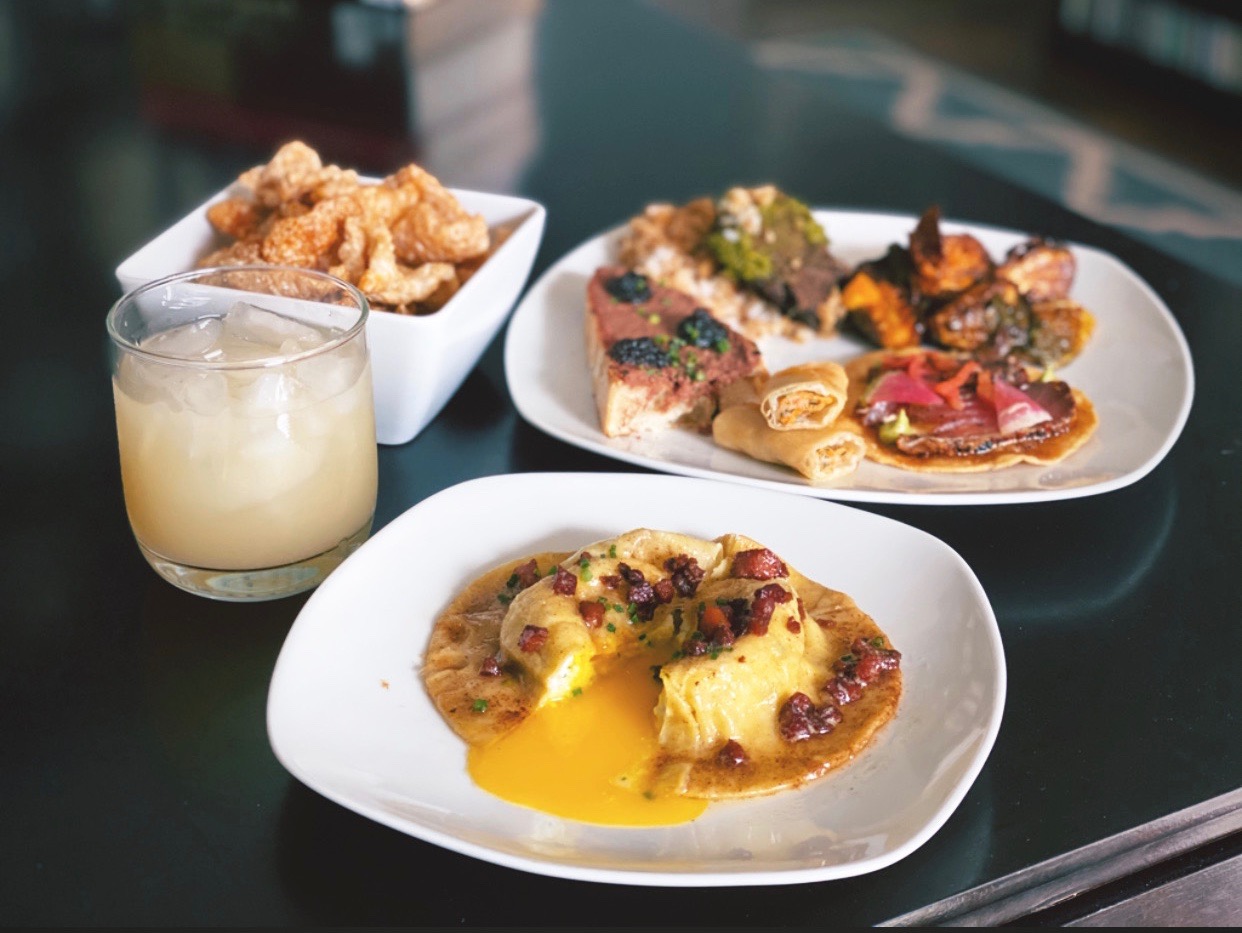 Pangilinan is a master of the Californian cuisine model, where various cultures—his own Filipino roots, Italian food, French technique—are fused into singular menus. With his playful take on those fusions, the result is everything from adobo-style meats and halo-halo to twice-baked potatoes and duck ragú.

Remix is no different: sitting next to chicken liver toast and raviolo al’ uovo are shrimp lumpia and pork cheek adobo.

Are these the foods of delivery or take out? Not typically—but Pangilinan is, as he said, adapting to avoid the end of his culinary dream while continually “testing the waters and figuring out what works.”

And I must admit, after having Remix for the first time this past weekend, I lamented that it was not served to me right then and there, the way that Pangilinan would have dressed it—after all, a huge portion of the man’s talents lies with his ability to mix color, texture, and shape onto a plate.

The COVID mandates were painful for Pangilinan beyond food presentation since his staff had already been hired and trained and were patiently waiting for management to give them some sort of answer about when Remix would be opening.

“It’s really frustrating to say, ‘Thank you for your patience, everyone, we’re going to open next week!’ only to be followed with a, ‘Sorry guys, there were some permitting issues so you’re going to have hold out a bit longer,'” Pangilinan said. “I don’t think many understand that, really, it’s an entirely new business model. And if I were to really respect my staff, I would have to assure that model works; I had to test the waters.” 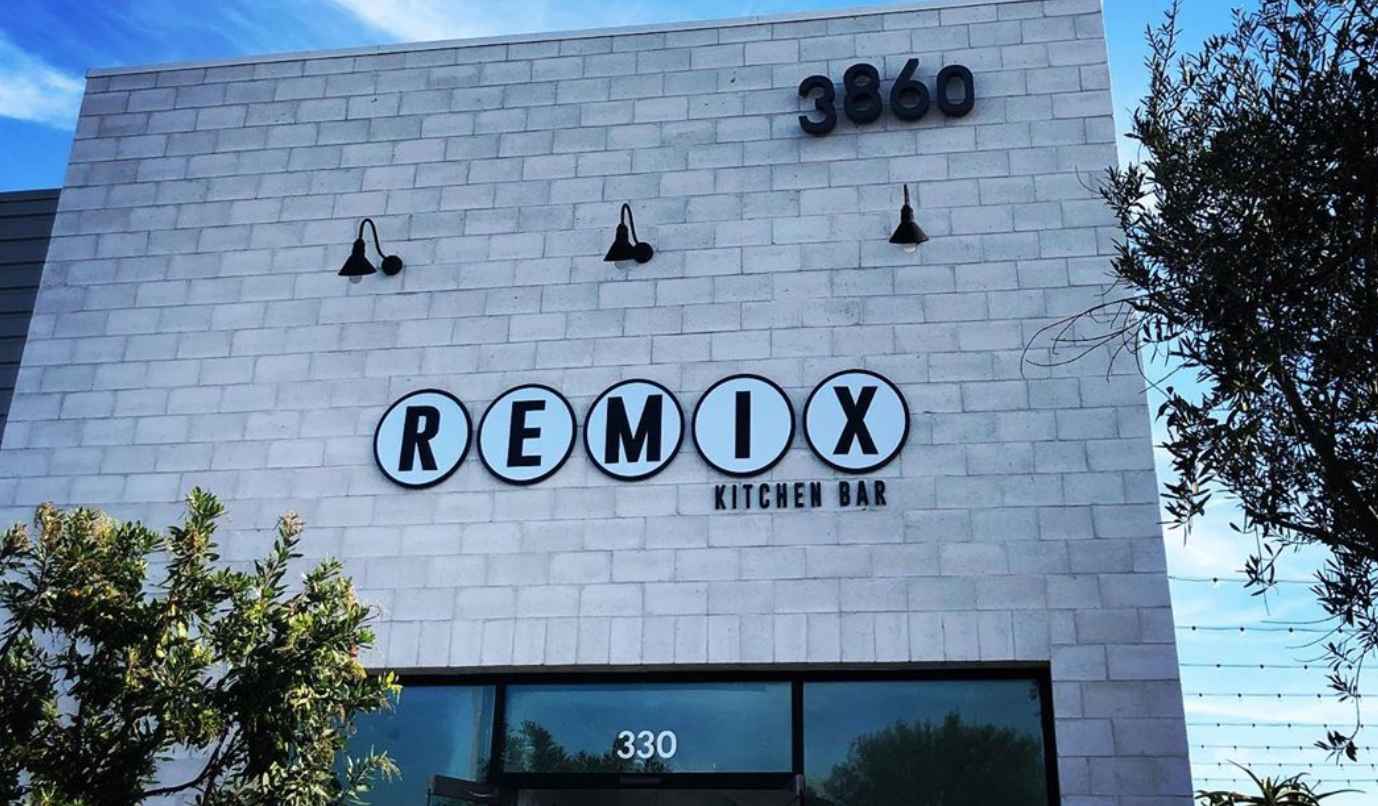 Remix at the Long Beach Exchange.

Pangilinan knew he would have to adapt to the new reality or close up shop. And so, utilizing only the talents of his Mix Mix sous chef, Adrian Campa, and his wife, Tara, the trio began testing the waters of the new COVID food world.

He quickly figured he could use his other existing locations to test delivery options while tinkering with details—his point-of-sale system, serving cocktails, maneuvering the space—at his as-yet-unopened space. And now, nearly six weeks in, Pangilinan now felt it was time to open up Remix’s doors and figure out how to introduce himself to East Long Beach.

“We are definitely learning as we go,” Pangilinan said. “My food was never intended for delivery so it’s kind of like figuring out how new muscles work.”

In a local food scene already reeling with anxiety for weeks, anxiety that ratcheted up several notches following the recent closure of Rock Bottom in Downtown Long Beach, Pangilinan’s drive, optimism and resilience are as welcome to the area as his cuisine.

“If we need to, we’ll open at 50% capacity as things return—we’re ready for that,” Pangilinan said. “We’re ready for Long Beach.”