Long Beach’s first and only grain-to-glass distillery, Portuguese Bend Distilling, is making a name for itself outside of our city, scoring a national medal from the nation’s oldest and largest craft spirits competition, the American Distilling Institute’s Judging of Craft Spirits.

Scoring a silver medal in the neutral flavored vodka category for its Premium Breakwater Vodka marks the first major award scored by Portuguese Bend Distilling. For master distiller Simon Haxton, the true beauty of the win is that Breakwater is “Long Beach’s vodka.”

“The evolution of the vodka flavor profile leaned heavily on Long Beach itself,” Haxton told the Post. “Because there are so many directions you can go with this category, we listened closely to our local customers’ feedback for guidance. We kept tinkering until we heard, ‘This is the best we’ve ever had.’ So you could say this is Long Beach’s vodka. And apparently Long Beach has great taste.”

The win is no small one: Launched in 2007, the Judging of Craft Spirits utilizes 45 judges from the spirits industry to blind taste and evaluate every submission in the competition, complete with written feedback and an electronic score sheet, the latter of which is a new addition that better allows entrants to understand how their spirit was scored. 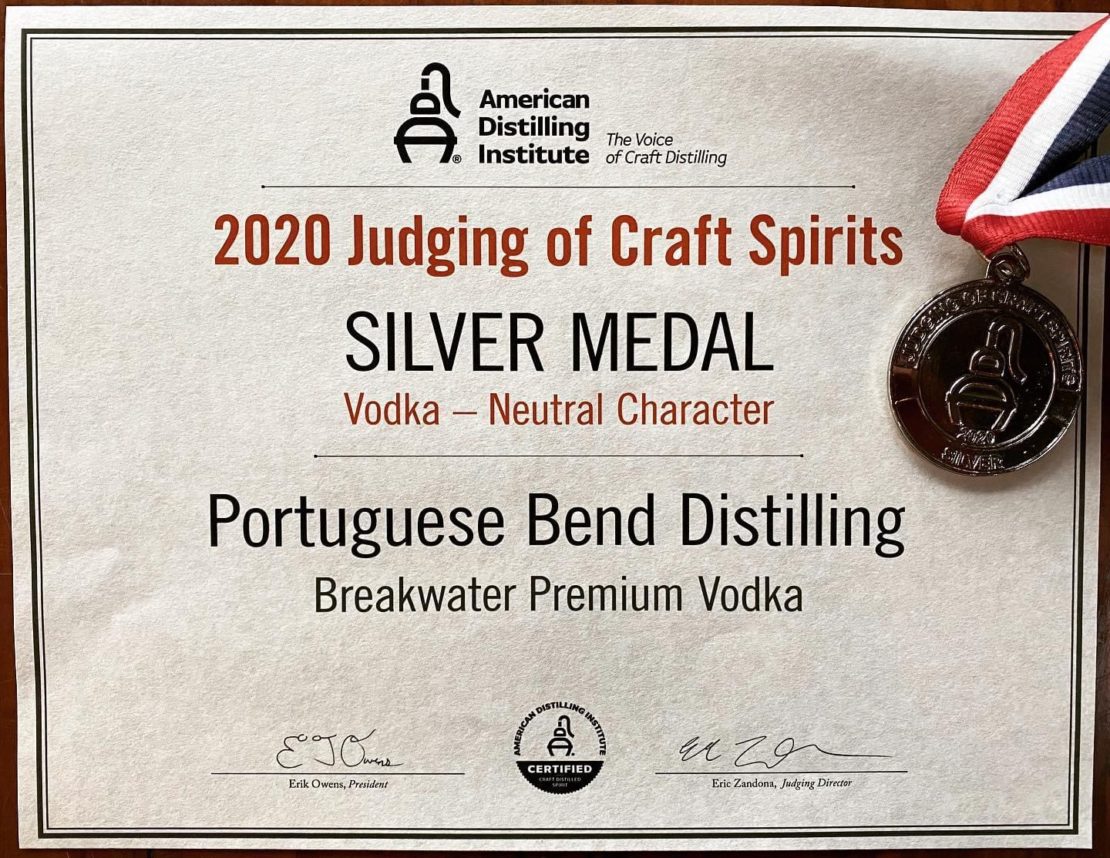 The 2020 competition saw 990 entries from across the globe, from  Mexico to Cambodia, Lithuania to South Africa. This year’s “Best of Class” vodka was awarded to J.T. Meleck Distillers, a Louisiana-based distillery that has been distilling since 1896—no slouch to be runner up to, especially considering Portuguese Bend has been around all of a year.

“The distillery is Simon’s laboratory, that’s his domain,” said co-owner Luis Navarro. “Brenda [Rivera, my wife and co-owner] and I leave him alone when he’s in there with his test tubes. It’s really awesome to see him working in there. He’s like a mad scientist distilling for us, for Long Beach.”

The win comes with a measure of bittersweetness: the pandemic effectively shut down distilling for the distillery as the company was asked to step up and mass-produce much-needed hand sanitizer during the pandemic. Because of that, Haxton lost months off of perfecting his distilling skills.

“When we had to pivot and help our front line workers in the early stages of the pandemic, he put the hand sanitizer shortage on his back,” Navarro said. “I can’t imagine what was going through his mind, his ego—just having submitted the vodka for competition and having to stop making our spirits and start making hand sanitizer. He’s our local hero and, not gonna lie, I wonder how many lives he saved?”

Portuguese Bend Distilling is located at 300 The Promenade