It will likely become one of Long Beach’s favorite new patios as Mark Dunton, part of the original crew which opened District Wine in the East Village Arts District, sets his sights on getting foot traffic, empty stomachs and thirsty throats to Downtown’s Rainbow Bridge with his latest concept, Risu (properly, Risü—get to that later).

Following the success of District Wine is no easy feat. It made Yelp!’s inaugural 100 Best Places list back in 2014 and has garnered a loyal, consistent following as one of the city’s most respected oenophile hangouts. But much can happen in six years, including a formal shift away from District and head-on into an entirely new space amid a pandemic.

“Since leaving District, I knew my next project had to be something unique and with a full-bar,” Dunton said. “It is kind of stars-aligned that this space fell into our laps—even though it’s been a rather bumpy ride.” 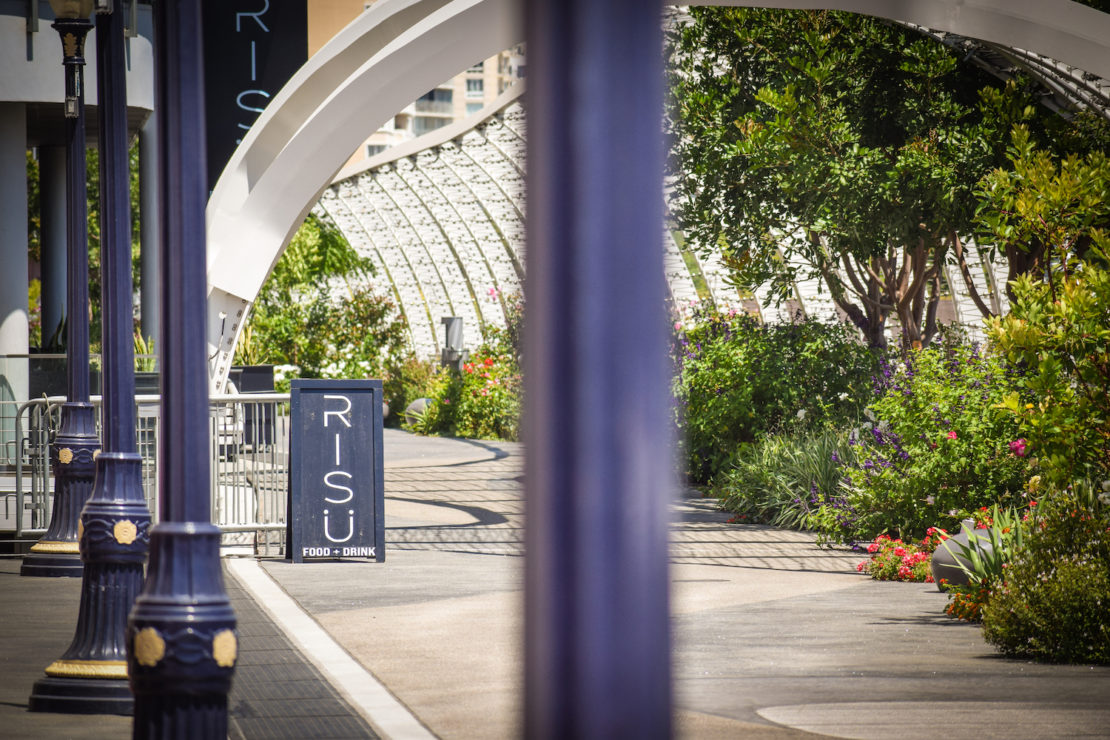 Risu is located on Rainbow Bridge, above Seaside Way in Downtown Long Beach. Taken on July 21, 2020. Photo by Brian Addison.

That ride, which ends at Risu sitting in the center of the 605-foot Rainbow Bridge, decked out with 3,500 LED lights, 100 downlights and 70 floodlights so that at night, its patio is a truly distinct experience, included an opening date that was initially pushed back. Developers told Dunton to be ready by November of last year, leaving Dunton to book what would become canceled Christmas parties after the developers then pushed back the opening to January, in what turned out to be another false start.

Come March, the apartment complex known as The Crest finally opened south of the Breakers Hotel development. And a week later, stay-at-home orders were enacted due to COVID-19, meaning the beautiful setting and Dunton’s ability to experiment with alcohol beyond wine and beer has long been juxtaposed with our new reality in the restaurant and drinking world.

“Building was finally done, we were done and then four days later, the full shutdown,” Dunton said. “It’s like, ‘Dang, we were so close!’ But the good thing is that, thankfully, we hadn’t hired staff yet and we hadn’t yet received our first product order, so we dodged a bullet on that.” 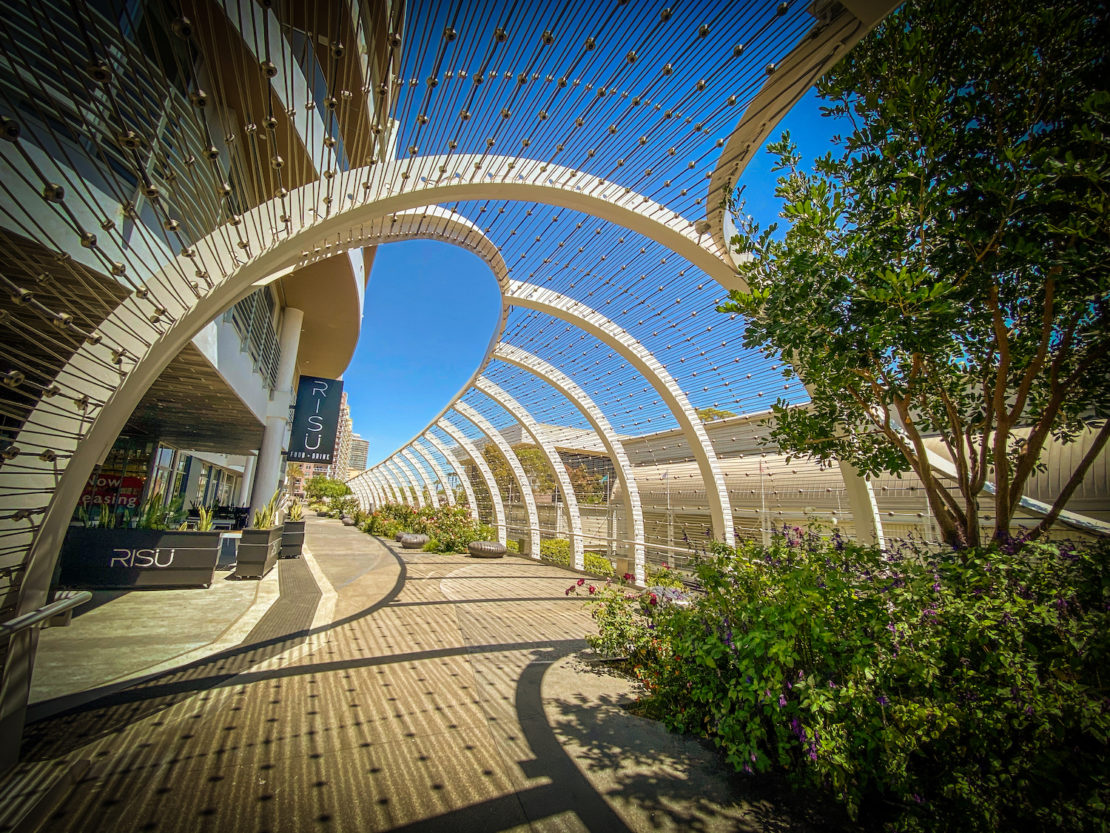 The wave-like design of Rainbow Bridge serves as a canopy for Risu’s patio. Taken on July 21, 2020. Photo by Brian Addison.

Since then, Dunton has been maintaining a connection with his wine and spirits distributors while slowly preparing for what is now his new reality: An extensive, patio-only space with a California-centric menu led by Chefs Henry Pham and Ramiro Diaz—think charcuterie boards for the wino groups, fresh flatbreads for the carb lovers, and dishes like short ribs with tomato jam for those looking for a more food-centric experience—while allowing his bartenders to explore their creativity.

And for Dunton, this presents a silver lining.

“I know we’re lucky to say this, because many have struggled, but we have the flexibility to be creative without all the pressure of opening something and having a flood of conventioneers,” Dunton said. “It’s also been a way to get my staff pumped up with their efforts because they can so freely explore what works and what doesn’t. ‘What do you think about this idea?’ And they take ownership of it and their ego isn’t there. It’s really just wonderful.”

With a wine club and happy hour on the way, Dunton is convinced that a steady and loyal crowd will soon follow as Risu begins to slowly create a name for itself as well as the space that connects the Terrace Theatre plaza with the convention center.

And as for the name? “Risu” means laughing or smiling in Latin—”And who doesn’t want to do that when they’re out and about? Add the two dots above the ‘u’ and there you have it: Risü.”

Risu is located at in Suite A at 207 E. Seaside Way along the Rainbow Bridge. It is currently open Monday through Friday from 4 to 10 p.m. and Saturday and Sunday from 2 to 10 p.m.