After many conversations with friends whose parents died during the pandemic, 34-year-old Nancy Luong said a common regret they shared was not talking with family more. In response, Luong published her first book, rather, a guided journal, meant to help bond people with parental figures by asking meaningful questions, sparking conversation and creating life-changing bonds.

The journal made the No. 1 new release list on Amazon and also made the site’s bestseller list when it was published.

For this first-time Long Beach author, even though she was able to speak with her Vietnamese mother and Chinese father in their native tongues, Luong was still experiencing a language barrier, but not in terms of grammar or fluency. Rather, their chats didn’t dig past “surface-level conversations.”

“For probably 30 years, we’d talk about the same thing: ‘How’s the weather? How was work? How was school?’” she recalled. 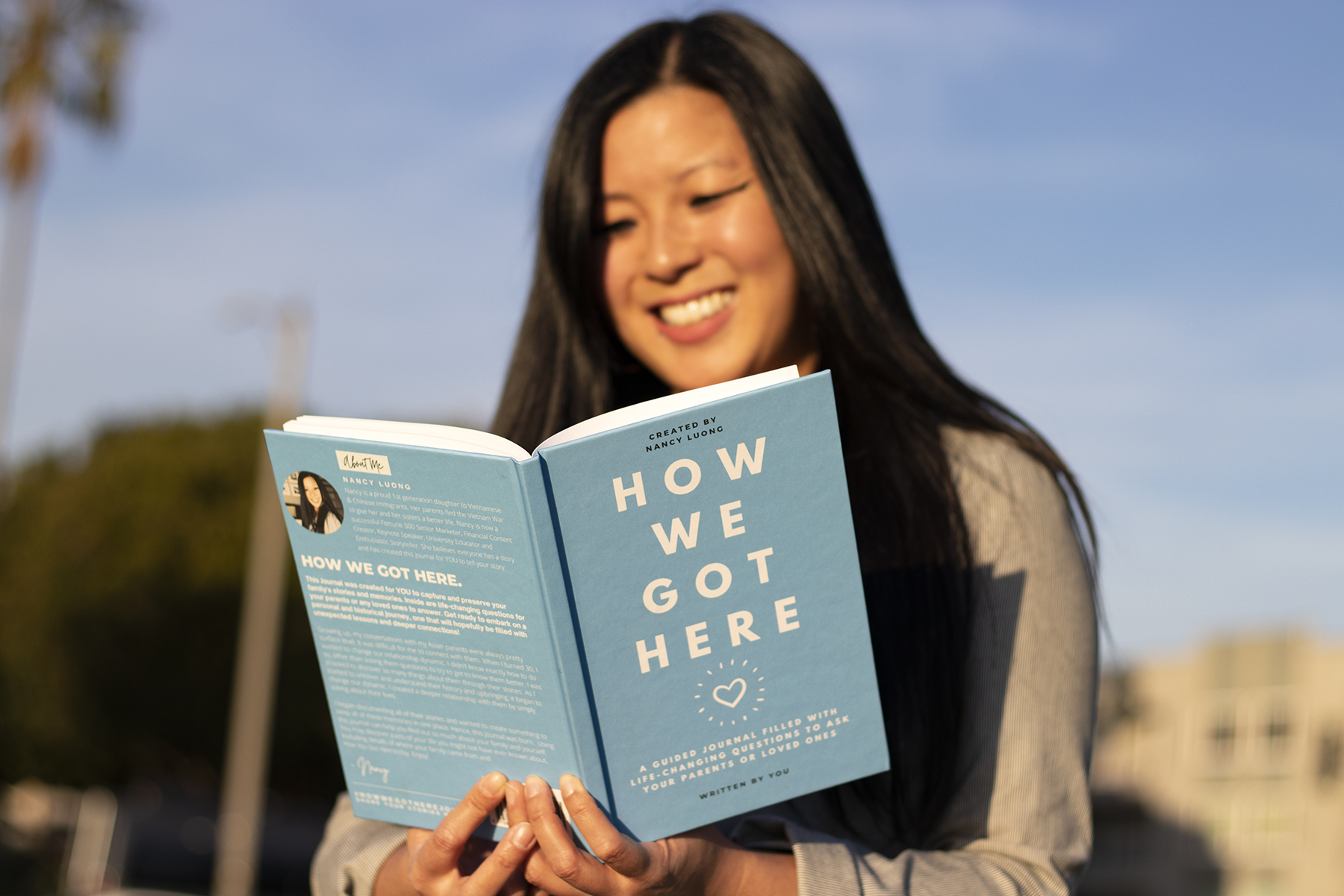 Debut author of “How We Got Here,” Nancy Luong, 34, holds a copy of her guided journal, “How We Got Here.” As a first-time author, this Retro Row resident landed as a bestseller on Amazon. Photo by Crystal Niebla.

She wrote in her book that she first opened up to her parents following a “horrific” breakup that left her “at rock bottom.” She didn’t feel she was ever good enough, she wrote, and so she mustered the courage to ask her father, a tough and strict man, if he was ever proud of her accomplishments, such as her graduation from Cal State Long Beach in business marketing.

Of course he was, he told her, but there was no way of her knowing since he never said it.

“It’s hard for me to say it because I don’t know how to,” Luong recalled her father telling her. It was after that conversation that Luong was actually able to begin to bond with her parents.

She asked her father about his past and eventually understood that it was hard for her parents to communicate on a deeper level.

Parents grew up in Vietnam and later fled the Vietnam War in 1979. They escaped on a boat to Indonesia, her mother carrying her 1-year-old baby, Luong’s eldest sister, onboard. They lived in a refugee camp for two years, and her mother then gave birth to Luong’s second sister at the camp. Finally, in 1981, they came to the United States. Afterward, her family struggled to navigate the country not knowing English.

After having meaningful conversations with her parents, Luong said she learned how her parents were raised and what they’ve been through, and, as a result, why they act the way they do.

Coming from an immigrant family, we’re in “survival mode” and sometimes have trouble carving out the time to get to know each other on a deeper level. Her parents won’t respond to misfortunes with sadness, for example. “They’re so unfazed by anything,” she said. And, eventually, Luong understood why they were so “hard.”

Her father, for instance, had assumed Luong knew they were proud of her accomplishments, even if he didn’t express it.

“How am I supposed to know that you cooking food for me means you love me?” she said, hoping that her book can help bring clarity to how family members feel about each other.

Luong says users of her journal might run into parents asking, “Huh? Since when did you want to know about my life?”

“But once you do that, they will not stop talking.”