On a bright Thursday afternoon, Kate Hockett, owner of Planted LB, is in very good spirits. The moon and its “good” placement, she said, had a fair effect on her sunny disposition. But mostly she was still feeling the energy high from her shop’s grand opening party the weekend before.

“I felt almost like it had this energy of my wedding or something,” she said. “I’m not married, but just because it was dusted in magic.”

On Sunday, May 30, several hundred friends, family, neighbors and curious plant enthusiasts celebrated the arrival of Planted LB, a houseplant and flower boutique on the corner of Temple Avenue and Broadway, situated inside a craftsman-style home turned-business-center. Debra Felipe, the building’s manager, estimates that the home was built in the early 1900s.

“This building used to have an ocean view,” Felipe said, a view now obstructed by newer apartment buildings and houses.

Selling out of nearly all her flower arrangements, potted plants, succulents and other gardening accessories was a promising sign for the first-time retail business owner who admits she had never planned to own a plant shop, but once the idea came to her, everything fell into place.

“I moved back to Long Beach, literally two weeks later decided to open a plant and flower shop, and two months later have this giant party where all my family comes together, all my friends, all my community,” Hockett said. “The next step is just booming success.”

Part of that success Hockett hopes to achieve isn’t a monetary one. Her mission is to help others find the same comfort and spiritual connection she said she’s discovered with plants. Before moving back to Long Beach, Hockett lived in San Francisco and for 11 years worked for social justice and women’s empowerment nonprofits. She’s also an astrologer, a practice she said she’s studied for the last decade.

The plants, she found, went hand-in-hand with cultivating a spiritual connection and improving self-care.

The pandemic put an end to her retreats, but she continued to help others with astrology. Though her services were rendered over Zoom, Hockett said she never felt too alone, despite the isolation. Tending for her 70-some houseplants, she said, also helped. Not in the sense that her plants provided viable relationships, but that she was showing up, taking care of something other than herself.

Hockett said she’s designed her shop’s offerings toward two market categories she’s defined as the “rich mom avatar” and the “millennial avatar.” The former is geared toward the customer who might be looking for a unique potted gift, with a little more money to spend. Her orchid arrangements, for example, feature a bright orchid potted with an assortment of smaller plants and decorated with moss. Terrariums also fall in this category and feature various rocks, crystals and plant arrangements designed by Hockett.

The millennial category targets those trepidatious first-time plant buyers, who aren’t looking to spend more than $30 on a plant but are eager to spruce up their home with a new leafy friend they won’t risk killing two weeks later.

“I think us millennials have this theory that if we’re not a green thumb, or if we kill the plant, it’s over, we’re done,” the 30-year-old said.  “And I really want to get the message far and wide that you can do it. It’s not that hard, you just have to slow down and be a little bit mindful.”

For the “millennial,” she’s stocked a variety of succulents, snake plants, Begonias and other “easy-peasy,” low-maintenance houseplants. Buyers can also peruse a selection of gardening accessories, such as clay pots, hand-dyed macrame hangers, plant racks and soil. 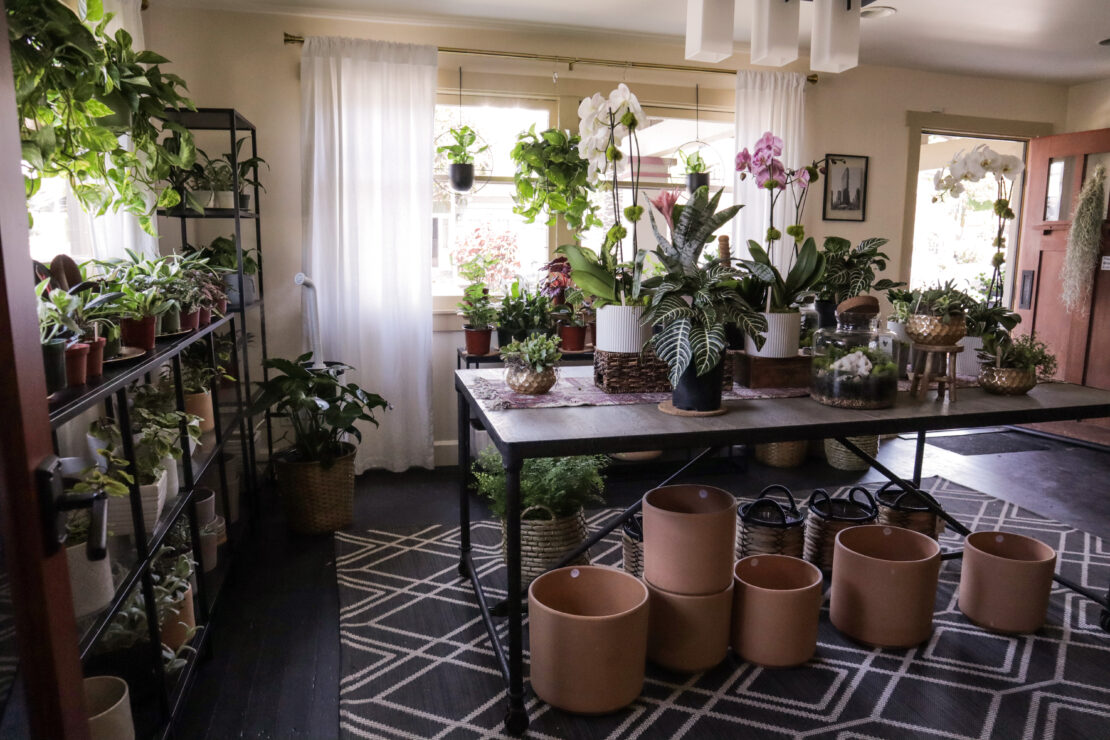 The interior of Bluff Park’s new plant shop, Planted LB, is inside a 1900s craftman-style home-turned-business center. Plants are staged in what was likely the foyer. On the second floor is an open-style office space that used to be bedrooms. Photo by Cheantay Jensen.

Though Hockett admits she had never quite envisioned a career of selling greenery, she said plants and flowers have always been a major presence in her life. Growing up in Belmont Shore, and later Alamitos Heights, Hockett described her family’s home as a jungle—plants and flowers on every surface, a leafy green always in eyesight.

For years, Hockett helped with her mother’s local landscaping business, which led to her own side-hustle designing flower arrangements for private events, such as weddings and business parties. Hockett continues this creative outlet on Fridays, where patrons can purchase $25 grab-n-go flower bouquets arranged by Hockett and sourced from the Los Angeles Flower Market.

The rest of Hockett’s offerings are hand-picked from wholesalers in Torrance, Whittier and Los Angeles, many of whom are connections she made when helping with her mom’s landscaping business years ago.

“Something that kind of what separates my shop with maybe an Armstrong, or a chain, is that when you come here, you’re really getting not only a personalized experience having me as the owner, obviously, but getting a plant that you couldn’t find in other places,” she explained.

Hockett also offers several home essential items, such as candles and fragrance room sprays and said she’s open to bringing in other merchandise.

“I kind of take the murmur and the messages from everyone around me as sort of messages like from my higher power coming to me,” she said. “I’m opening my heart to let those come through. Is it napkins? Is it crystals? I don’t know.”