Ronnie Woods has held many professions over the course of his life. After serving with the Navy mostly in the Middle East in 2007, Woods came back stateside and worked in a variety of occupations, including mechanic, mattress salesman and security guard, to name a few. Though Woods has tried many jobs, the one thing that’s always remained constant is his love for the kitchen and a passion for cooking up a great meal.

Taking on the moniker of Chef RonDoe on social media, Woods has perfected his culinary skills and is on a mission to open up his own standing restaurant in Long Beach to be called Northtown Bistro as an ode to the neighborhood and the city in which he grew up.

Northtown Bistro is a facet of Woods’ umbrella company called Northtown Hospitality LLC, but it currently does not have a brick-and-mortar location, which is the goal Woods is working toward.

A native son of North Long Beach, Woods grew up near the bustle of the Atlantic Avenue and Artesia Boulevard intersection. He’s an alum of Jordan High School and fondly remembers hanging out with friends at Houghton Park and the Volcano Burgers fast food joint that used to sit at the intersection.

“Me and the homies used to go there after school, order the large onion rings with ranch, and that was it,” he recalled.

He’s witnessed a transformation in the community of new restaurants and other amenities opening in North Long Beach.

“I love it, you know, they’re bringing people, bringing different cuisines, but it’s still not reflective of the community that’s there,” Woods said. “There’s Latinos, Samoans, Black people and that’s what I want to bring. Long Beach—North Long Beach in general—to me, is lacking a good soul food, comfort diner place.”

Woods believes that more locally owned small businesses need to be part of the Uptown rebirth. 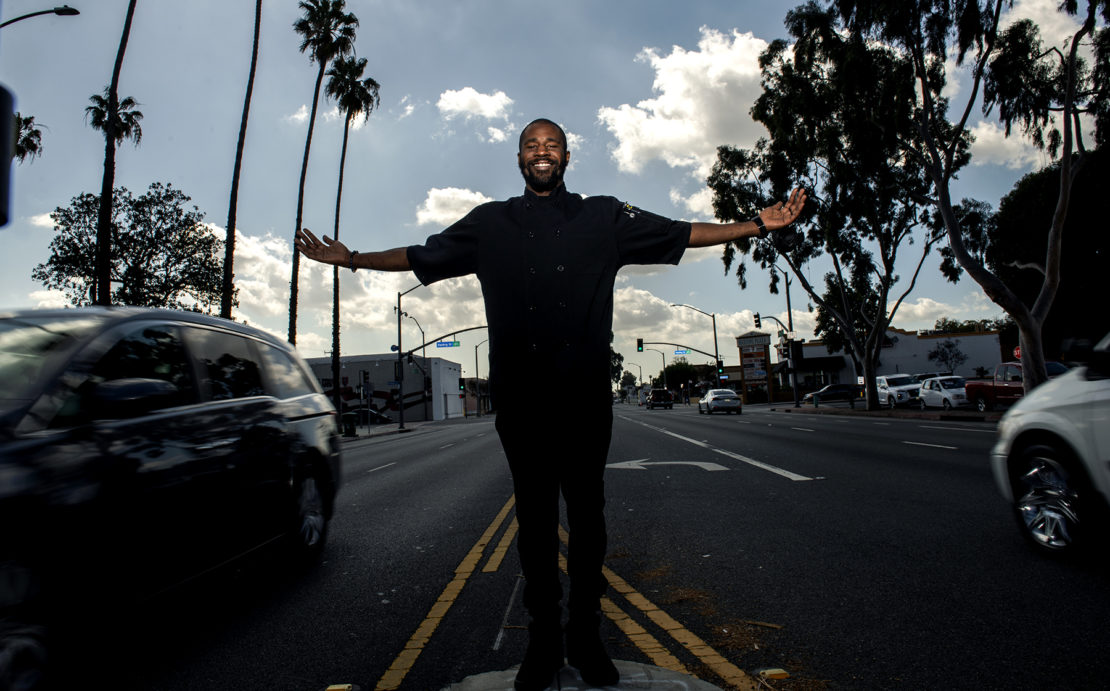 Growing up around soul food and barbecues, Woods’ passion for hearty eats comes from his childhood and his father’s backyard grilling. Classic family meals and ingredients that Woods savored while growing up have made their way into the food he now serves from his Northtown Bistro.

“My dad had tons of barbecue pits in the backyard, so the idea for Northtown Bistro really came from that type of lifestyle,” he said. “That family, homey environment.”

In 2019, Woods finalized the idea of what Northtown Bistro would become. It featured a seasonal menu that showed the diversity of California produce, Woods said. In early 2020, Woods rented a food truck and drove up and down Long Beach as a way to get his food out to the public. Woods says Northtown Bistro specializes in smoked chicken and sausage gumbo, tri-tip sandwiches, shrimp po’ boy sandwiches and grits made with different types of corn.

If there’s something Woods is always doing, it’s cooking. He’s a scholar of the trade and currently attends Auguste Escoffier School of Culinary Arts online. He also works under the executive chef at 320 Main Restaurant and Bar in Seal Beach. On the side, Woods teams up with fellow chef entrepreneur Quianna Bradley of A Pinch of Salt Catering to develop pop-up-style supper clubs for their online followers.

Getting a business off the ground is no easy feat, and Wood’s Northtown Bistro is no exemption. He started a fundraiser in January to help with the purchase of the appropriate permits and the city’s operating taxes. He’s had his test run so far for Northtown Bistro through the food truck last year, but the goal is to open up a permanent location where “people can come, sit down and enjoy themselves.”

“Especially with COVID, the road got a little harder,” Woods admits, however, this doesn’t deter him from his ultimate dream, which is to bring a restaurant worthy of a Michelin star to North Long Beach.

Until then, people can follow ChefRonDoe on social media where he usually announces where he will be cooking his meals. He also offers catering services through his social media platforms.