A fairly new trend of the restaurants that are opening now in Long Beach is going the extra mile to not just pursue organic products, but to build local partnerships in an effort to source foods locally, from as close as our own backyard.

Liv’s in Belmont Shore, which opened Sept. 1, is doing just that. A bright, clean and tastefully decorated dining room with stools by the windows looking out over the patio and onto people strolling down Second Street.

Oysters on ice are displayed for the picking at the stool-lined oyster bar, and the sound of the shells being shucked echoes off the walls. All the seafood is sourced from independent boats up and down the coast from Santa Barbara to San Diego bringing in their catch every other day.

But Liv’s is taking the extra step by also sourcing sea fare from a small fishing boat moored in Alamitos Bay casting its lines right outside our breakwall.

“I plan on sourcing as local as I can,” said Liv’s owner Rob White of his restaurant named for the daughter he hopes to have one day. “I’ve been wanting to work with oysters for a long time, and this seemed like the right time and fit for the space.”

From approachable comfort food to savory umami bombs, intertwined with delicate dishes for the more refined palate, Liv’s seems to be offering a little something from the sea for everyone. Seaside Fries ($14) the pescatarian’s answer to chili fries, are a must-try if you’re heading out to the bars of Second Street. Similar to what would be called “wets” in certain parts of the midwest (fries drenched in gravy), or Canadian poutine (same fries, same gravy, but with added cheese curds), Seaside Fries are covered in a rich house-made white seafood chowder that is sure to get you ready for a night of cocktails.

Note: While there’s no beer/wine license in place as of yet, diners are encouraged to BYOB with no corkage fee, giving you the freedom to spend less on libations than you would were you buying by the glass off the menu.

The house made poke, priced by the pound ($32), is possibly one of the greatest ways to taste the flavors of fresh-caught fish that fill your senses with notes of the ocean. Be sure to try the “Hawaiian”—bigeye tuna, scallions, sweet onion and chopped macadamia nuts bathed in a savory caramel wash of tamari (similar to soy sauce but less salty and gluten free).

Or, if you’re ready to taste the ocean full-on, go straight for the crudo ($20). Crudo is to Spain and Italy, as sushi and sashimi are to Japan. Thinly sliced raw seabream, a delicate white fish with briny ocean flavors and a firm and meaty texture, prepared with preserved citrus and zaps of lime zest. Essence of Fresno chiles add a soft waft of heat cleansed with bright freshness of micro arugula; each bite connected to the next by sprinkled pops of salt crystals over a splash of beet juice. 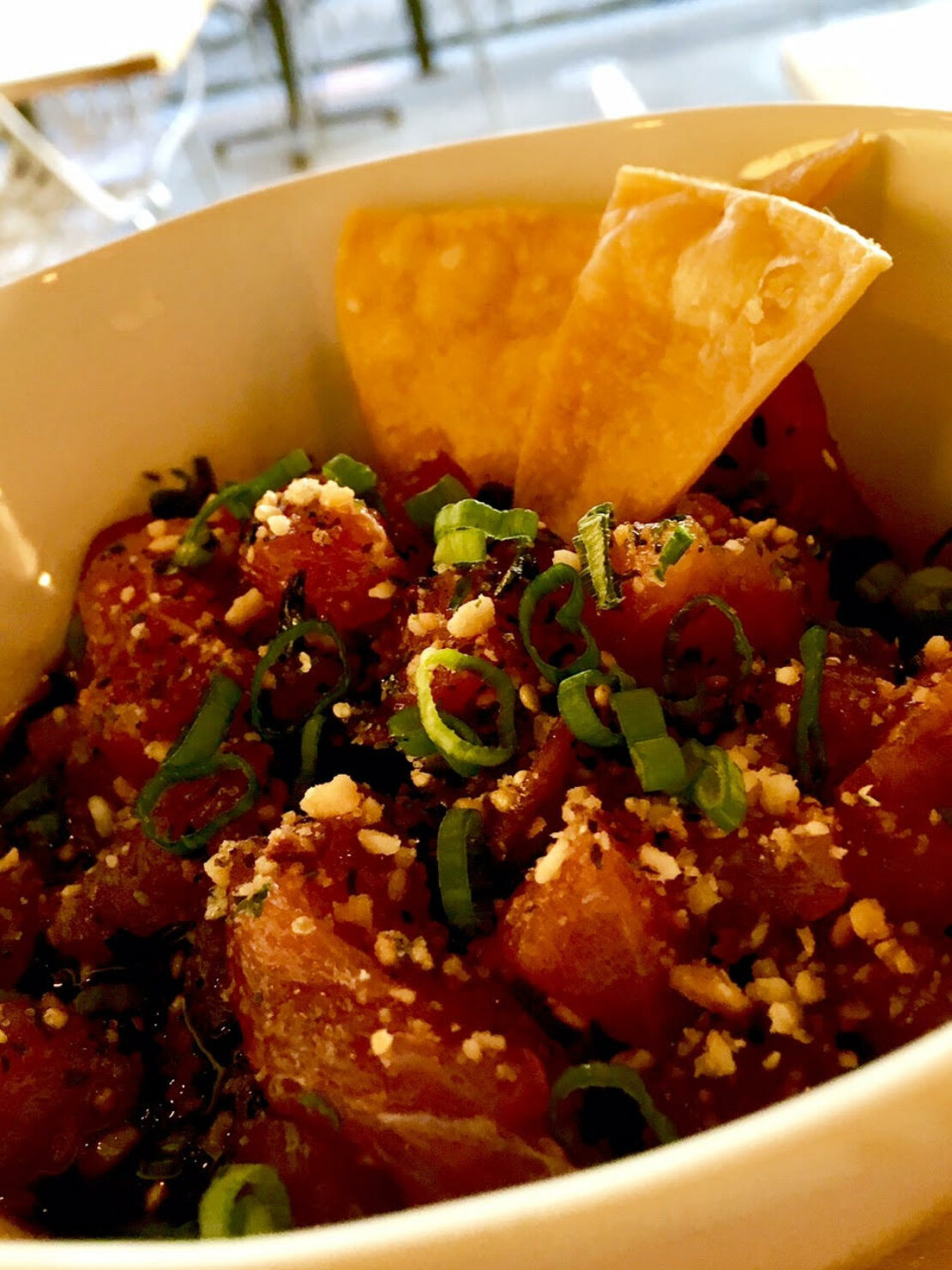 Poke at Liv’s on Second Street, a new restaurant that seeks to locally source its offerings. Photo by Matt Miller.

However, if you’re looking for something a little bit more warming on these chilly autumnal Long Beach evenings, don’t miss the cioppino ($30). Cioppino is a warm, comforting tomato-based fish stew that was made popular in this country in the 1930s in the San Francisco Bay area by Italian fishermen, and traditionally contained whatever fish was freshly caught that day. Liv’s version contains littleneck clams, salt spring island mussels, blue crab and locally caught sea bass served in a warm broth of tomato and fennel and served with a hunk of char-grilled sourdough.

Are you free on Monday? If so, and you’re an oyster lover (or at least looking for a way to supercharge a happy-hour date), Liv’s is offering half-off oysters every Monday from 4 to 9 p.m. on plates of six or 12. Be sure to try the sweet and briny Bahi Falsa oysters ($18 / $34), and the Phantom Creek oysters ($21 / $40) meaty and satisfying with refreshing notes of sea spray from beginning to end.

The menu is subject to change to match the catches of the day. 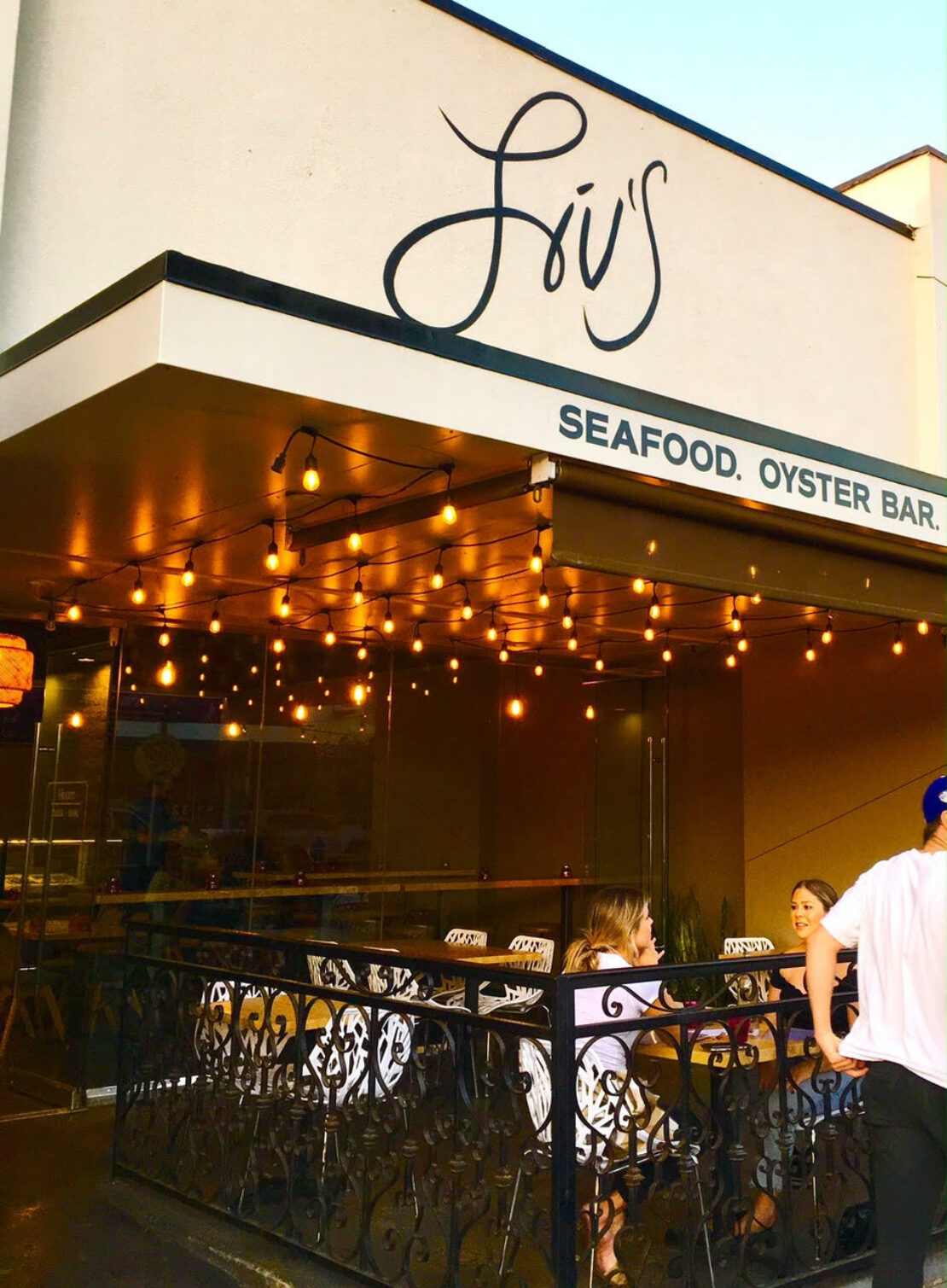