Last year was one of pain and loss for Giovanna Ferraro.

In January 2020, she and her 70-year-old mother, Francesca were struck by a car while walking Downtown, and her knee is still in pain.

A few months after the crash, COVID-19 arrived in the United States, something that would eventually claim her Pine Avenue gym, Groundwork Fitness. She was forced to shutter it for good—another one of the pandemic’s economic victims.

Ferraro, a longtime homeless advocate who was thrust into that work after her dad died homeless 16 years ago, said she needed to sell the equipment from her gym to pay her own bills to avoid ending up on the street.

“I was thinking, ‘homeless advocate becomes homeless, like her dad, cool,’” Ferraro said. “How are we going to navigate this?”

The answer came in February when Ferraro decided she was going to tap into her college acting days and write and produce her first film, “Lennon,” which she produced and acted in. It’s now set to premiere at The Art Theatre Dec. 9.

“I am nervous as hell,” Ferraro said. “I have continuous butterflies in my stomach. I’ve never done anything like this.” 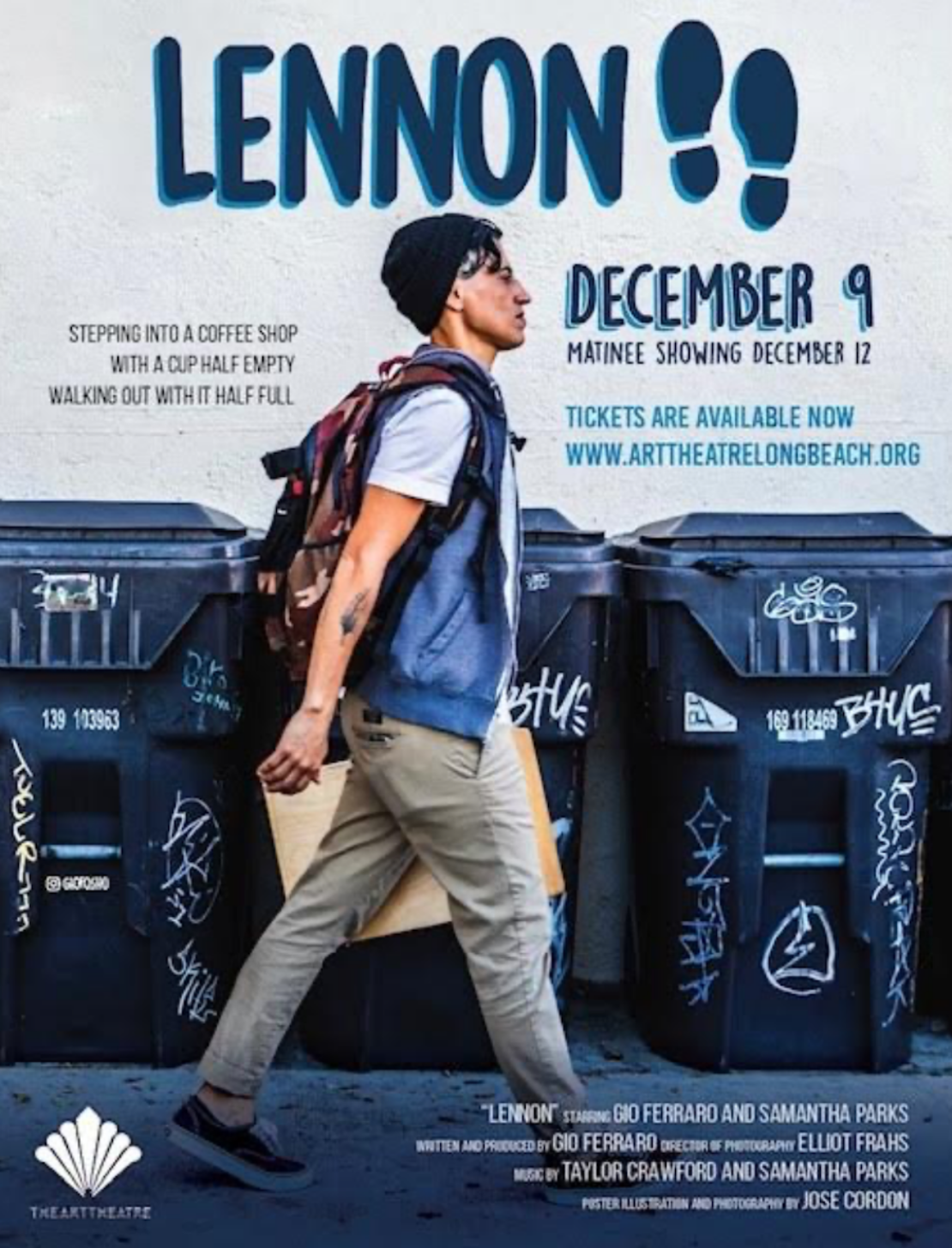 A movie poster for “Lennon.” The short film will debut at the Long Beach Art Theatre Dec. 9.

Before filming “Lennon,” Ferraro already knew the stories of some of the city’s most vulnerable people because of her advocacy work with Keep LBC Fit, a nonprofit that gives people socks with homeless-service resources printed on them. But the film gave her a new way to share that story with others. She started writing the script in February 2021, and by June she was filming.

She said “Lennon,” a 26-minute short film, is about tearing down some of the myths that surround those experiencing homelessness while trying to spark conversation by showing what life is like through their eyes.

“Really it’s about compassion,” Ferraro said. “I really want, with this short, to ignite the part of the heart in people that I feel is getting burnt out.”

Jumping into the film industry was a challenge considering that she had no experience since her days at Pasadena City College where she earned an associate’s degree in theater arts.

But Ferraro said her experience as a small business owner gave her both the stamina to be a producer and a network of connections to tap into for things like a camera and a filming location.

Much of the film was shot inside Rose Park Roasters on Fourth Street, a favorite hangout of hers that is also owned by a friend who voluntarily closed the inside for three days in June so she could film “Lennon.”

The process from filming to the December premiere at the Art Theatre was all made possible through a community network she developed as a gym owner over the past eight years, she said.

Ferraro said she intends to make more films and is looking into internships and other opportunities to sharpen her skills as a writer and producer. The focus of her future films will likely continue to be marginalized communities who need to have their stories told, she said.

As for “Lennon,” Ferraro said she hopes it can serve as a starting point to develop the type of community that is necessary to begin ending the homelessness crisis that has gripped the region.

“I hope to hell it pushes buttons,” Ferraro said. “I want you to leave thinking about it, and go home and have conversations about it.”

Lennon is set to debut at the Art Theatre Dec. 9 at 8 p.m. with doors to open at 7 p.m. Proof of vaccination and mask-wearing will be required. A question-and-answer session will follow the screening. Tickets can be purchased here for $10.

Editors note: This story has been updated to reflect that the film was produced by Giovanna Ferraro but directed by Elliot Frahs.