There was a kid, maybe eight years old, who curled himself into a ball and was having the time of his life being gently pushed around the cabin of a Boeing 727, one specially modified to give passengers the experience of weightlessness. The kid was like “a little cannonball” said Zero Gravity Corporation’s (ZERO-G) CEO, Matt Gohd, describing one of the handful of times he’d experienced floating within the padded playroom of the aircraft as it soared through parabolic arcs, allowing 30 or so passengers on board to hover.

“It’s difficult to describe,” said Gohd, who, as a kid, was a self-described space nerd. “It’s not like being on a roller coaster, it’s not a violent feeling. It’s like you’re laying down on your bed, and then all of a sudden you’re just kind of pulled up towards the ceiling. Literally, you just float.”

Earlier this month, ZERO-G announced its 2020 flight schedule with stops in eight cities, the first in Long Beach this Sunday, Aug. 16., with updated health and safety measures due to the coronavirus pandemic.

The first, and only, FAA-approved provider in the U.S. providing weightless flight for the public, ZERO-G has flown some 17,000 passengers since 2004, said Gohd. The Boeing 727, called G-FORCE ONE, is given FAA-designated airspace approximately 100 miles long and 10 miles wide where three to five parabolas—curve-shaped flight patterns—are flown one after the other, with a short period of level flight between each set. The duration of the flight is about an hour and a half.

“Basically, we are assigned a box to do our operations in […] away from everybody and it’s probably just as well,” said Gohd. “If you were on the ground and saw this, you’d say, ‘What’s going on up there?’ Or if you were in another plane flying and looked down and said, ‘Oh, my god that plane’s in a nosedive!’ You’d say ‘What’s going on there?'”

And it’s not only floating that passengers get to experience during the flight. Additional activities while floating, may include flying through a hula hoop, chasing down a handful of released M&Ms like human Pac-Men, “hanging upside down like a bat,” as Gohd did, and watching, enchanted, as water droplets bounce through mid-air.

But what if it’s not just water droplets being seen, but the contents of one’s stomach?

“It’s a legitimate question, and the visuals of that are for sure there, but that is so, so rare,” said Gohd. “Of the 1% of the people that fly that do have an issue, [they] either thought they were going to outsmart us and not have breakfast, or drink the night before, or sometimes, by trying to take selfies and videos of themselves, get disoriented.”

It’s reassuring to know that the crew onboard is trained to spot signs of motion sickness early on. They may ask a queasy looking flyer if they’re feeling okay and offer them a piece of ginger gum, and if that’s not enough, the “actively sick” guest will be moved to the back of the plane. 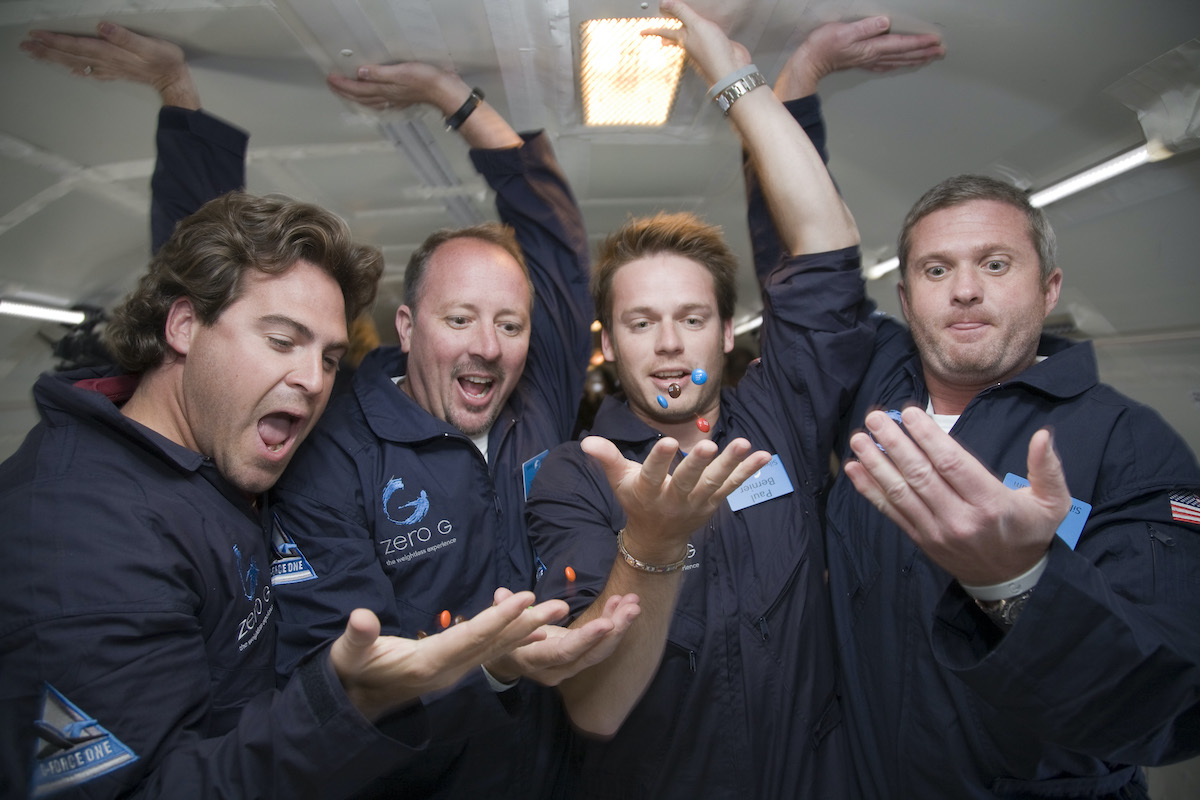 So, how do you avoid being that person, the one buckled into a time-out, clutching a barf bag, watching everyone else enjoying their once-in-a-lifetime opportunity to float in the belly of an airplane?

Just do what Gohd said, don’t drink the night before, eat the breakfast provided by ZERO-G (an all-carb, muffin, oatmeal, bagel situation), and let them do the filming and photo taking: “If you follow these three super easy things, there’s nothing to it,” Gohd said.

Gohd stresses this is a fraction of the cost of consumer space travel, the wonders of which ZERO-G simulates. Trips with spaceflight companies such as Virgin Galactic and Blue Origin cost upwards of $200K and that’s barely scratching the surface of future privatized trips beyond Earth’s atmosphere.

From movie stars and billionaires—Elon Musk, George Takei, Martha Stewart, even Lorraine Kelly—to teachers whose students have fundraised to buy them a ticket, to families and adventure seekers—Gohd met one passenger who flew in from New Zealand just for ZERO-G, then flew right back—it’s an interesting cross-section of folk seeking the thrill of being weightless.

“It’s a bucket list thing for some people, someone whose dream is an astronaut experience and to feel that they’ve done something that is so unique, that there’s very few people that get to do it,” Gohd said.

While it’s a bit last minute to make a reservation for Sunday’s flight, Gohd said he “never like[s] to say never to anything,” although it is a process and depends on what room they have left. However, if all goes to plan, ZERO-G may be back in October for its fourth flight in Long Beach this year.

For more information, including all COVID-19 Safety Measures ZERO-G is implementing—which include temperature and pulse checks, passengers required to wear previously shrink-wrapped flight suits, and PPE, limiting capacity by 30%, and a full cabin exchange with external air every three minutes—or to make a reservation, visit gozerog.com.