When Ashley Ratcliff was first misdiagnosed, her Long Beach chiropractor said her poor walking caused by severe back pain was due to a herniated disc. He stuck needle electrodes into her lower left leg and zapped to test her nerves. For months, each time her chiropractor assured her she was fine. Because her symptoms were worsening, Ratcliff sought a second opinion from a neurosurgeon.

The neurosurgeon immediately diagnosed something much more serious: Ratcliff had multiple sclerosis, an incurable disease that impacts the brain and spinal cord. Symptoms may include numbness, impairment of speech and of muscular coordination, blurred vision and severe fatigue.

Devastated, Ratcliff fell into depression. She lost her carefree identity, she said. She wanted to get healthy; she needed to live life intentionally.

Eventually, Ratcliff reached a more manageable way of living, and her journey of overcoming depression and the physical limitations of MS led her to write, “Jesus Year,” a best-selling book on Amazon in December 2020. Most recently, 37-year-old Ratcliff recorded and published an audiobook to increase access to people suffering from MS, who sometimes develop vision problems.

She couldn’t walk properly and wore a boot on her left foot. As she stayed consistent with her physical therapy, eventually she graduated into an ankle brace. She wore it for about a year and now walks without assistance. Now, her legs might get wobbly from time to time during flare-ups or over-exertion, but Ratcliff has learned to listen to her body and manages.

Black women ‘blown off’ by doctors

While MS was previously thought to be a disease affecting mostly Caucasians, a journal from Neurology.org, which has been cited in federal studies on the disease affecting people of color, researchers found that the risk of MS is 47% greater among Black women compared to other subgroups in the United States. Overall, the incidence of MS has increased over the past five decades, according to the journal.

Studies show that physicians don’t regard Black women the same as their White counterparts when it comes to pain tolerances and overall treatment. A misconception that mostly White women suffer from MS, she said, likely contributed to her misdiagnosis.

Concerned for her health, she asked her chiropractor to request a magnetic resonance imaging (MRI) but he said she was fine.

“He wasn’t receptive of me,” Ratcliff recalled when she raised concerns. “He kind of made me feel small.”

She almost canceled her independently booked MRI appointment and was glad she didn’t. The scan showed lesions in her brain, a common indication of MS. Her neurosurgeon also identified in her left ankle that she had clonus, a neurological condition that involuntarily contracts muscles, soon after her official diagnosis in March 2018.

Ratcliff’s previous misdiagnosis led her to seek a community among other Black women living with MS, who might have had similar experiences. Her book, she said, was written with a Black audience in mind. 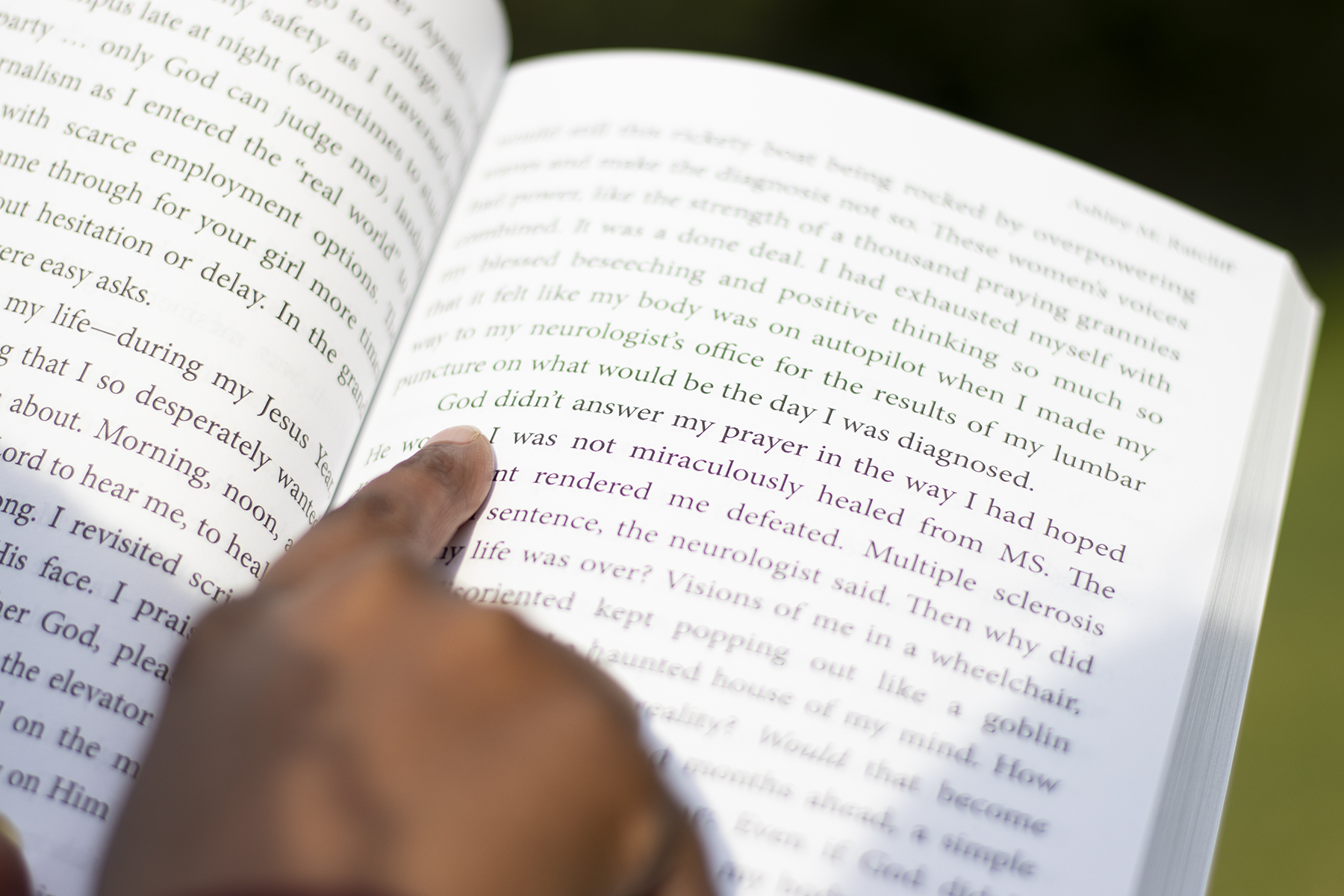 Long Beach author Ashley Ratcliff points to one of her favorite lines in her book, “Jesus Year,” which documents her journey with multiple sclerosis, at El Dorado Park in Long Beach on Wednesday, March 30, 2022. Photo by Crystal Niebla.

Reader Bianca Sair, 33, found “little gems” throughout the book that helped her cope with the news of her ailment. Sair was misdiagnosed for about two years with carpal tunnel until February 2021. Disheartened with the news of her incurable diagnosis, Ratcliff’s book helped her “come out of that dark space,” especially since it was written for Black women.

“I clicked with her,” Sair said.

LaRoyia Smitherman, 36, who downloaded the audio version, was in search of connecting with other people with MS who looked like her, she said. Since 2014, she had been “blown off” by doctors about her come-and-go MS symptoms because she was “young and strong.” Resonating with Ratcliff’s book, which listed similar experiences, Smitherman said the book can help other Black women “advocate for themselves” during the diagnosis process (she was just diagnosed in December).

Taking control over something

As she struggled to walk the 3-mile route of the Walk MS at Eldorado Park three years ago, wearing her brace, others among her weren’t as able-bodied, so she pushed herself to finish for their sake. She cried as I crossed the finish line. “Tears of joy though,” she said.

The walk was part of the National MS Society’s Walk MS in Long Beach,  for which she’s fundraised more than $10,000 in the past years. Now that COVID-19 rules have loosened, she and her fundraising team are gearing up for the next walk on April 30 at El Dorado Park, which will kick off at 8 a.m.

Ratcliff isn’t a doctor nor a scientist, but raising money for research is powerful in its own right, she said.

“I’m doing something that’s within my control,” she said. “I’m doing my part to help find a cure for this thing.”