This story has been updated to clarify the influences different styles of barbecue, from Cambodian to Santa Maria, have had on Shady Grove Food’s barbecue.

I’m going to give thanks this year for the news I just read that the vacant restaurant space at 2708 E. Fourth St., the former home to the locally infamous Restauration (fallen one-time star of the Long Beach food scene) will be the new home to father and son barbecue team David and Dennis Robicheau’s, Shady Grove Foods.

That’s right people — barbecue! And not just any barbecue, a new genre being dubbed “Long Beach barbecue.” The Robicheaus are known for their pop-ups at Ten Mile Brewing, and Brouwerji West in San Pedro, or outside of Wine Country on Redondo Avenue on Thursdays. And if you’ve smelled it, you’ve tasted it.

Let me tell you the greatest thing about barbecue — I mean to pick just one would be like asking what the best breath you’ve ever taken was, I get that — but it’s that first smell. Getting sucker punched by that first waft that downright assaults you with an explosion of flavor bringing on a response that can only be described as carnal. Smoky, sweet, complex, haunting — that was what I experienced the first time I tried Shady Grove barbecue.

I was walking into Wine Country on a Thursday evening, minding my own business, and I was clubbed over the head then utterly entranced. A little side note on the flavor of barbecue, and what I mean by saying if you’ve smelled it, you’ve tasted it: When meat cooks, it isn’t just meat, it’s all kinds of things: 20 aldehydes, ketones, sulfur, methanethiol, methyl thiophene, mercaptopropanol, the list goes on and on but it’s all these things, the organic compounds — the building blocks of being — that make meat, well meat. And when they hit the heat tiny particulates break free and become volatile (airborne). They get caught on the wind and those microscopic physical particles of meat hover in the air until you take them in. Your tastebuds register them and your olfactory sense identifies the aroma, and BANG! vegan or not, you’ve eaten barbecue.

You may not have swallowed it, but it’s in you. And I guarantee, on a primal level you salivated and loved it to the core of your soul. Now, what is “Long Beach style barbecue”? It’s slow cooking with a Cajun influence, drawing seasoning inspiration from the sort of barbecue David grew up with, from Cambodian barbecue at his childhood friend’s house, Thai barbecued ribs and Santa Maria-style barbecue.

“It’s just using the influences of our town,” Dennis Robicheau told me over the phone, and I got chills with the honesty. “My experience with barbecue wasn’t Texas or North Carolina, it was Cambodian.”

Opening a new restaurant is never easy (I know, I’ve opened quite a few myself), but what it does take is confidence and a respect for what you don’t know.

“I’ve done a few things before inside restaurants so I’m not too worried,” Dennis told me. “But it’ll definitely be a new experience.”

The former owner of Restauration, Dana Tanner, closed her establishment in April. Tanner still faces misdemeanor criminal charges after repeatedly violating COVID-19 health rules, beginning with a New Year’s Eve party at Restauration during some of the worst parts of the winter COVID-19 surge when thousands of Long Beach residents were testing positive for the virus each week and officials were worried about coronavirus patients overwhelming hospitals.

The Robicheaus, meanwhile, are hoping to keep the magic of their pop-ups in their new venture. They might just be the ones to give Long Beach its very own food that makes it stand out: New York-style cheesecake, Chicago-style pizza, and Long Beach-style barbecue. 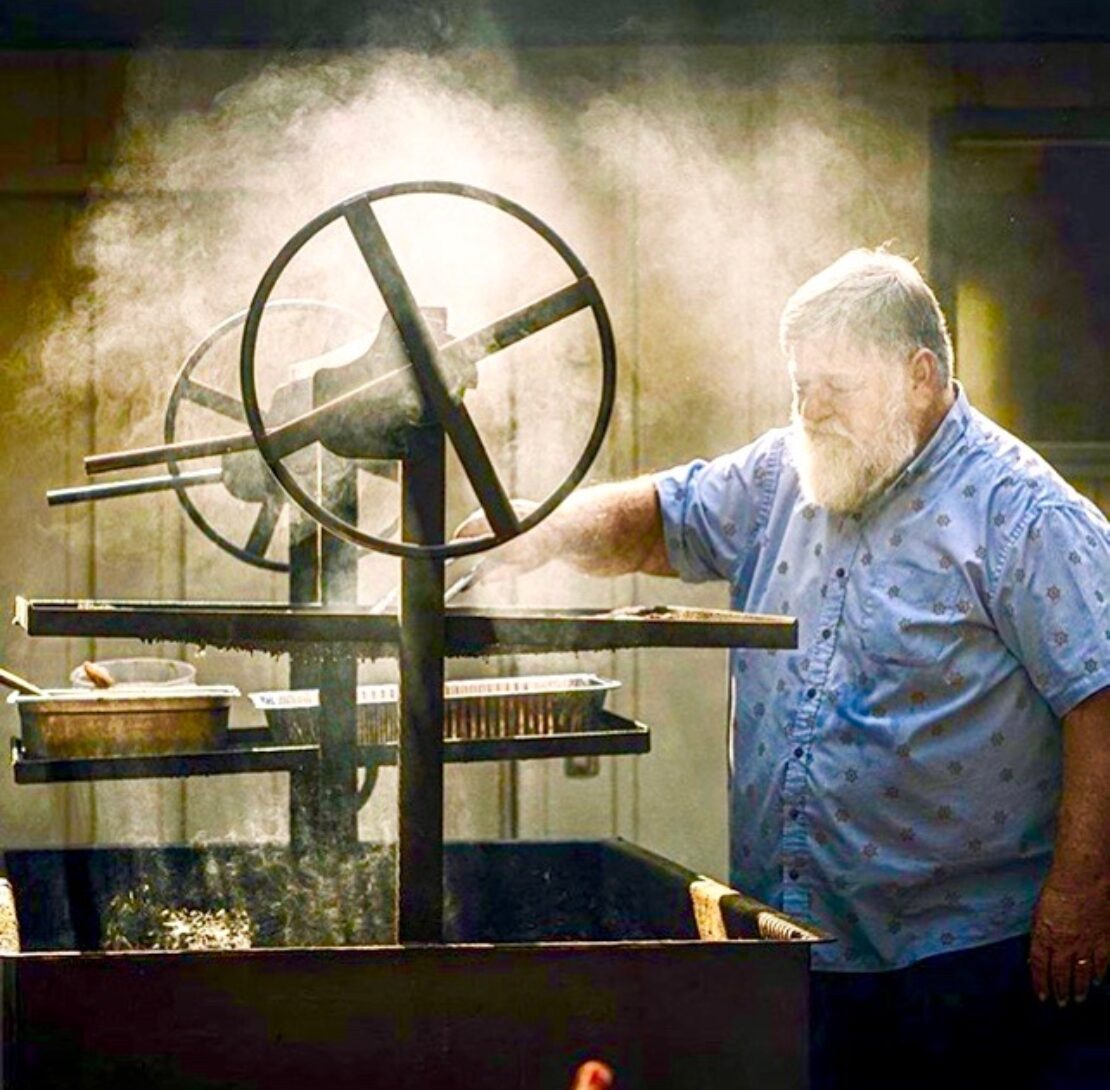 In addition to pork shoulder and bacon, the duo plan on offering high quality steaks and fish, too. The fact that this barbecue, this infusion of culture that could put Long Beach on the map, is setting roots right on the outskirts of Retro Row beside Gusto Bread is the most exciting part. Could you ask for a better pairing? The two have collaborated in the past using a torta style bread by Gusto for brisket barbacoa sandwiches, and there are destined to be more collaborations to come.

One thing is for sure, it’s going to be an amazing place for brunch.”We’re still figuring it out,” Dennis said of the beautiful back patio they’re going to use for seating.

“The Santa Maria grill and smoker are going to be on the back patio, [and we’re] obviously going to do brunches back there. Long Beach barbecue and Cajun cooking brunch,” he paused for a moment. “We’re both musicians and would love to do bluegrass brunch and things like that.”

They hope to open by March 1, and have a Mardi Gras bash for their opening party. And yes, March 1, 2022 is Fat Tuesday!  Keep an eye here for updates as the barbecue duo get closer to their day of slow-and-low perfection.