Michael’s on Naples will close a 12-year-old pizzeria attached to the upscale main restaurant, with plans to open a market pantry in its place where customers can buy a range of Italian groceries.

Michael’s Managing Partner Massimo Aronne said the main reason behind the change was to bring back the market the restaurant had launched during the beginning of the pandemic, a move many restaurants took to keep money coming in since patrons were no longer allowed to dine-in. During the pandemic, both the Michael’s on Naples and the Michaels Downtown offered fresh produce, pantry staples, and even toilet paper, as well as fresh-made pasta, sauces and family meals from their menu. It was surprisingly successful.

“We did really well,” Aronne said. “It kept us afloat.”

No changes are planned to the Michael’s Downtown restaurant at The Promenade.

Michael’s on Naples will be adding the wood-fired, naturally leavened Napoli-style pizzas to the restaurant’s fine-dining menu, a move Michael’s management said had long been requested by patrons.

The new 850-square-foot market will offer a number of gourmet Italian imports, with produce, pantry staples and other ingredients necessary to replicate an authentic Italian meal at home. 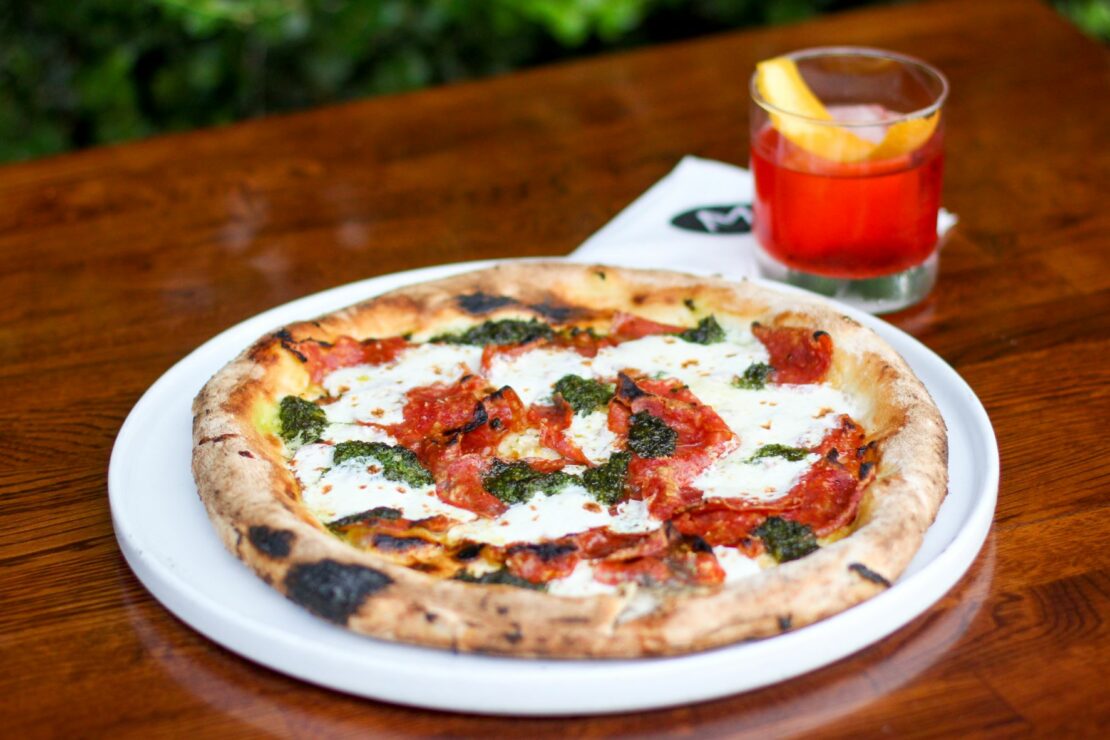 Michael’s Napoli pizzas are made with Italian double zero flour and naturally leaved for 24 hours before baked in a wood-fired oven. Photo courtesy Michael’s on Naples.

The original Michael’s on Naples market ran for about a year, Aronne said, but after they shut down they realized that customers had really enjoyed the concept and wanted to see it return. Rather than look for a brick-and-mortar nearby, the family business thought it smart to merge the two businesses to make way for the Michael’s Market, which management estimates will be ready for patrons by August.

Once open, shoppers can expect a wide array of fine Italian imports: olive oil and balsamic vinegars from across Italy, flours for pizza and pasta, produce, cheeses, cured meats and gourmet toppings such as truffles.

Michael’s also says it has plans to incorporate a corner of the restaurant for produce sourced from local and regional farmers, such as the Wiser Family Farms and Harry’s Berries in Oxnard, that will available on Wednesdays and Thursdays each week. There may also be options for grab-and-go foods, such as sandwiches, that can be reheated and eaten on site. Dinner hours will also feature a rotating menu of single or family-sized meals from the restaurant, such as lasagna, braised short rib or fried chicken, though this menu will likely be available sometime after the market opens, according to management.

The Napoli-style pizzas, named after the city in which it originated in Naples, Italy, is flame-licked and made with Italian double-zero flour and will be on the menu at Michael’s on Naples this weekend. The restaurant is currently in the process of curing its Marra Forni Italian brick oven and anticipates it will be ready for pizza by Friday.