Whether driving through Downtown Long Beach or sitting in the backyard, your chances of seeing the intricate orange, black and white pattern of a Monarch butterfly flash by has been especially high this spring.

Populations of danaus plexippus, as the insect is scientifically known, are believed to have increased in numbers in Southern California in recent years, even as the overall population of the species has decreased dramatically.

While seeing more Monarchs may seem like a good thing—they are regal—their increased presence in Los Angeles, the South Bay and Northern Orange County is a point of concern for butterfly experts.

Unlike their other California relatives, who normally migrate between the coast and valley of Central California, some local butterfly populations stay in one place and breed year-round, encouraged by the abundance of milkweed—their preferred breeding ground—in Southern California’s gardens. But all that Southern California love might be a little too much for the Monarchs to handle.

The Monarch mates for hours as males pass on a calorie-rich fluid to females—an exhausting process that leaves little energy for anything else.

Add to that the Monarch’s interaction with humans, many of whom may just be loving the insect to death. Impressive in size and color, Monarchs have gained fans all over who attach so many symbols and qualities to the butterfly that it must be difficult for its palm-sized wings to carry them all.

In recent years, immigrant advocates have adopted the species, native to the U.S., Canada and Mexico, as a symbol of free and peaceful migration. It has also joined the ranks of animals to become synonymous with the need for conservation, a role already familiar to whales and polar bears. A feature of the continent’s natural landscape for centuries, Native American tribes have their own longstanding cultural history with the Monarch.

Nowadays, the weight of all that symbolism may be dragging the species down. 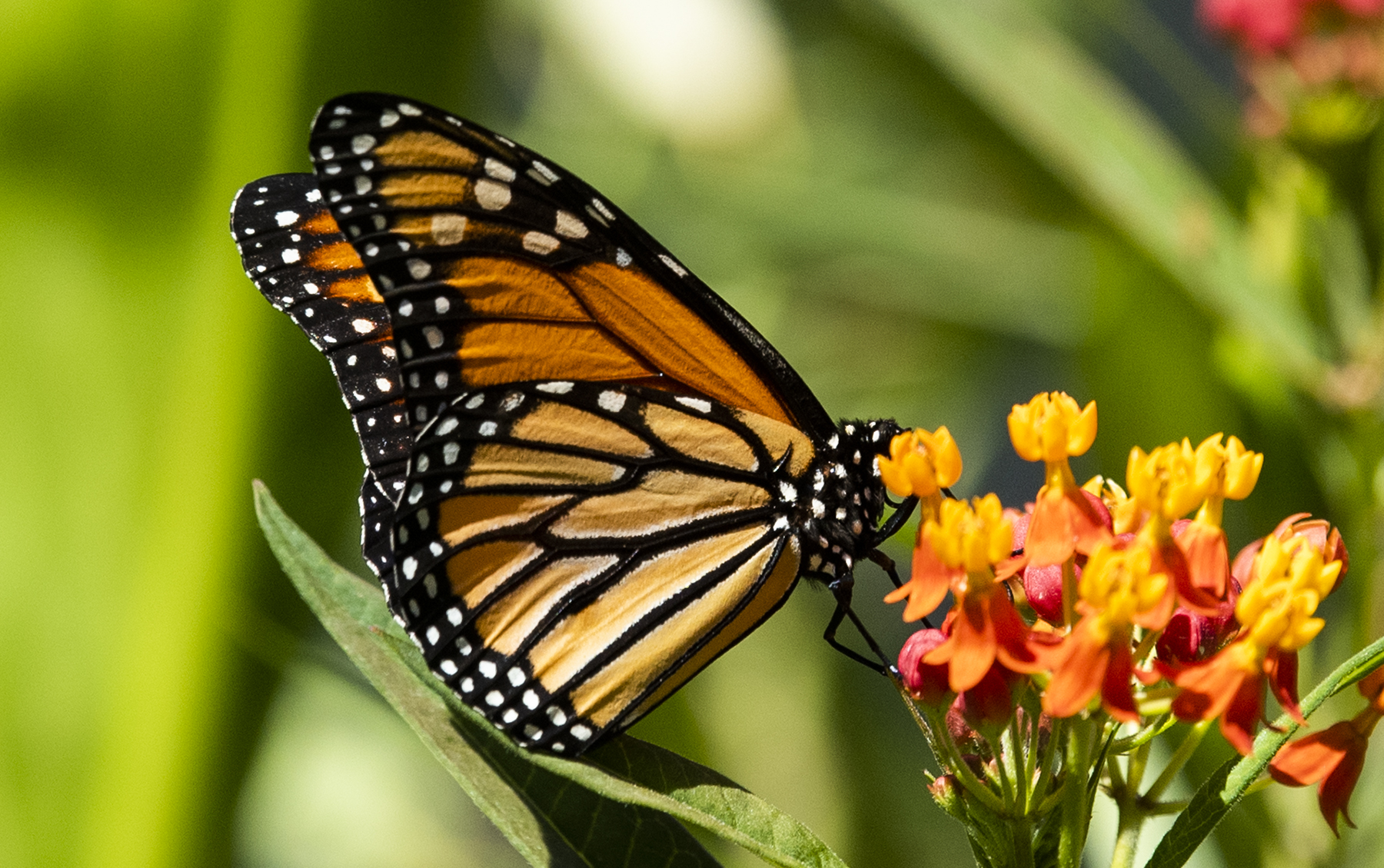 A monarch butterfly comes to rest onto a milkweed plant in a backyard in Fullerton Tuesday, June 16, 2020. Photo by Thomas R. Cordova.

It is not uncommon for Day of the Dead celebrations or wedding parties to release hundreds of previously captive Monarchs as a party feature. In an effort to teach their children about conservation, some parents purchase caterpillars and rear Monarchs at home, before releasing them into the wild.

This has become a hot topic in the Monarch world, Pelton said.

“People think it’s a great idea, but it’s not,” she said. Keeping caterpillars in Tupperware containers or larvae in mesh cages: “That’s not conservation,” Pelton added.

Well-intentioned as rearing Monarchs at home or planting milkweed may be, each risks weakening the overall population. Butterflies raised in captivity are not subject to natural selection and may dilute the gene pool of the general population once released into the wild. Tropical milkweed, which has become a common landscaping feature in Southern California, doesn’t follow the natural life cycle of native milkweed plants and its elongated lifespan gives parasites time to accumulate, which are then passed on to the Monarchs.

Once so common that newspaper articles from the 1800s described tree branches drooping under the weight of overwintering Monarchs, their population has declined from about three million in the 1980s to only about 30,000 recorded in the 2018-2019 Western Monarch Count.

While misguided conservation efforts aren’t helping, Pelton said they’re unlikely to be at fault for this mass disappearance. Instead, the destruction of coastal breeding sites through real estate development and the eradication of milkweed through industrialized agriculture are considered the Monarch’s biggest enemies. A sharp uptick in insecticide use in homes and gardens since the 1990s has also contributed to the demise of all butterflies.

That’s where local Monarch enthusiasts can make a difference, according to Pelton. Advocating against the large scale use of pesticides by city agencies and reducing their own use of insecticides at home, as well as allowing native weeds and flowers to grow freely in their gardens, gives butterflies, bees and other endangered insects a better shot at survival.

The preservation of ecosystems and wildlife can seem overwhelming, Pelton acknowledged. “Climate change, there’s stuff that’s just outside of each one of our purviews,” she said. “Insect conservation is something every single person can contribute to.”

Since the Monarch is easy to identify, they can serve as a sort of canary in the coalmine of species extinction, Pelton noted. So, she said, “if you do something good for Monarchs—plant habitat, stop using pesticides—those [actions] benefit a lot of wildlife.”