‘We can be influential’: Organizers seek to create a Filipinotown in West Long Beach • the Hi-lo
- ADVERTISEMENT -

From flavorful Filipino cuisine to the culture’s well-known character of hospitality and activism, local organizers are on a mission to create an official Filipinotown in Long Beach, with hopes of providing more representation for the city’s largest Asian population.

While the vision for a Filipinotown is still developing, organizers of the Long Beach Filipino Festival, the group leading the  effort, are considering designations and resources that could include a museum, a youth center that teaches Tagalog and support of the many Filipino businesses in the area. Also being considered is a statue honoring Jose P. Rizal, a Filipino nationalist whose writings inspired in part the Philippines Revolution in the late 19th century. He was executed by the Spanish colonial government for the crime of rebellion in 1896.

Ralph Santos, executive director of the Long Beach Filipino Festival, said that a “reawakening of Filipino activism” within the past decade is fueling this effort, with a goal of preserving cultural identity in California, such as the Filipino migrants’ relationship with the city’s historic naval presence and canning industry.

“A lot of people our age are having children who really need to understand their history, and make sure the history is not lost,” Santos said.

A woman walks past the Luisa and Son Bakeshop placed in a shopping strip mall on Santa Fe Avenue near Willow Street in West Long Beach Tuesday, March 9, 2021. Photo by Thomas R. Cordova.

Advocates for a Filipinotown are eyeing Santa Fe Avenue in the lower Westside due to an active Filipino presence in this unofficial “Little Manila.”

At the same time, the Long Beach Economic Partnership is working with community members to designate the Santa Fe corridor into a business area between Willow Street and Pacific Coast Highway, which they are currently calling “Santa Fe Village.”

Santos said a Filipinotown is an effort he’s wanted to pursue for several years. Community organizer Harold Dela Cruz, who works with Santos, added that as West Long Beach begins to develop economically, recognition of the Filipino community should be included in those plans. Dela Cruz, who grew up in West Long Beach, believes the Filipino community’s inclusion in economic development could also help strengthen the connection between businesses and organizations “so they’re not gentrified out of the area.”

The cultural group argues that an official recognition similar to how Central Long Beach has Cambodia Town, a business corridor, could become a mechanism to make Filipino businesses in West Long Beach eligible for resources.

How can a Filipinotown actually be created?

Assistant City Manager Linda Tatum said each proposal for a cultural space in Long Beach has been unique.

Cambodia Town, for instance, was named as a business corridor but that type of designation doesn’t offer any direct financial support to the businesses there. Financial benefits are led in part by the town’s Midtown Business Improvement District, which is something completely different. In September, the City Council approved the move forward with a visioning process for a Cambodian American cultural center.

Tatum said the naming of Cambodia Town is “gold,” in the sense that this official recognition allows a community “to build off that identity and use it in a many number of ways.” Some examples may include tourism or attracting businesses.

The African American Cultural Center of Long Beach is another example of a cultural space with different needs. Tatum said the cultural center has likely gone the farthest in its creation. Collaborative planning between Black community leaders began a few years back, and now, the cultural center lives temporarily at the Expo Arts Center in Bixby Knolls until it finds a permanent home.

A third example, the idea of having a Latino cultural district, “El Mercado de Long Beach,” had also been proposed to give the city’s largest population a culturally sensitive space for commerce and resources for food insecurity, housing and health care access. El Mercado is estimated to cost $30 million to create an economic hub with additional health-related resources, according to city projections released in October. This cultural district aims to have both a district and a cultural center, which would require much more funding.

Because the City Council embraces ideas for cultural spaces, Tatum said that the city is always willing to listen and explore options. 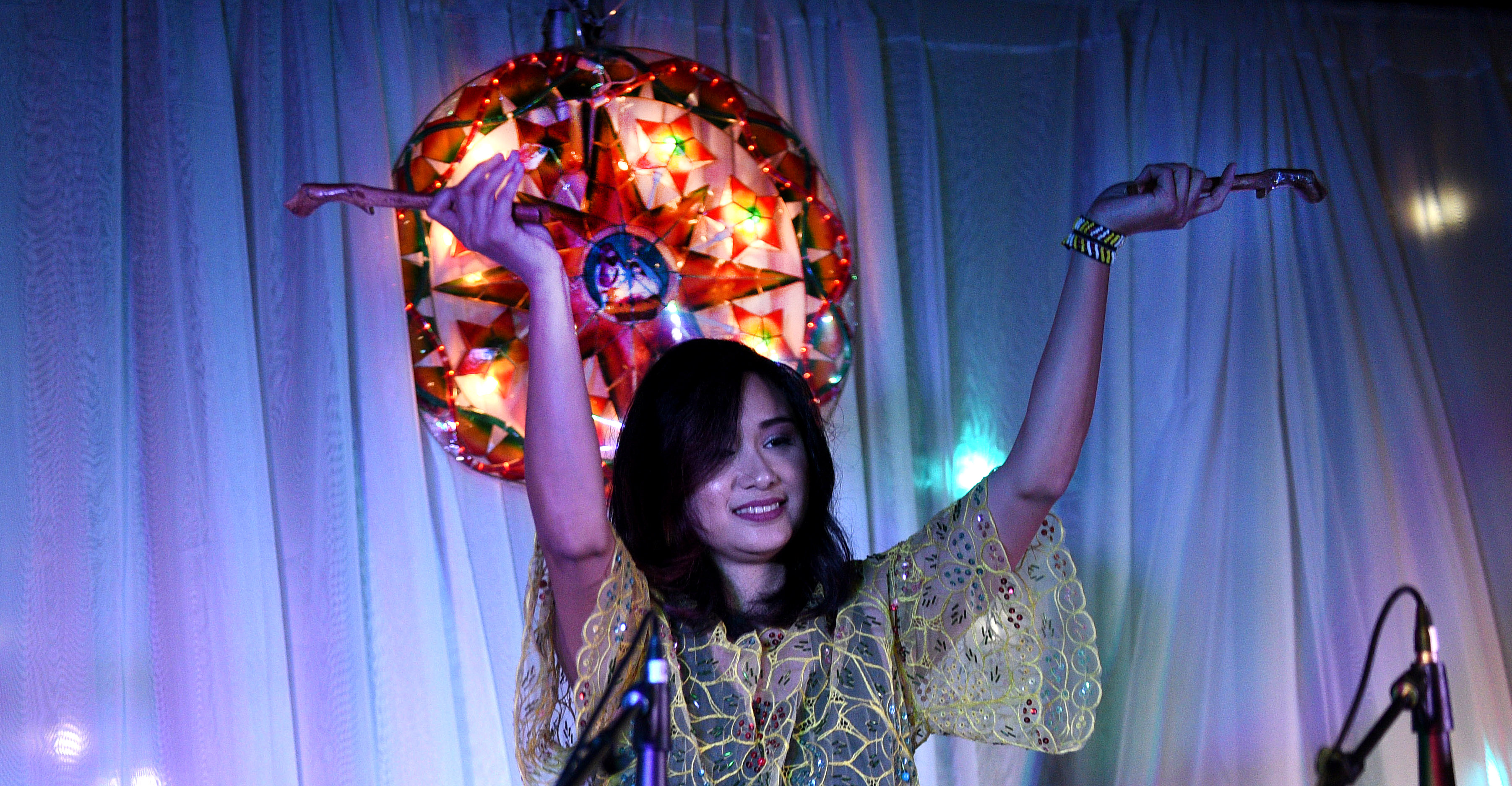 A Filipino artist named Gingee dances to one of her Filipino world-beat songs at the second annual Parol Lantern Festival at Pine Avenue and Fourth Street in Downtown Long Beach on Saturday, Dec. 14, 2019. Photo by Bill Alkofer.

Plans to economically develop West Long Beach are already in the works by city officials, including conducting a market study this year for the area to draw more neighborhood-serving businesses like banks and pharmacies, according to city officials. In June, an emergency ordinance also blocked the city from issuing new residential building permits along two corridors on the Westside in an attempt to save space to attract neighborhood-serving businesses.

The city’s timing seems to be aligning with the group’s campaign, and Dela Cruz said he wants to ensure the Filipino community is included in conversations surrounding the development of West Long Beach.

The next steps the cultural group plans to take is creating a petition to garner support for a Filipinotown and contacting the area’s councilmember, Santos said.

In Los Angeles, home of the largest Filipino population in the United States, the Historic Filipinotown was created in 2002. Long Beach’s group doesn’t necessarily want to replicate LA’s Filipinotown, but rather create its own version based on residents’ input.

When fellow organizer Jun Aglipay was first introduced to a Filipino cultural event in San Pedro, “that pretty much changed my life and really brought me home.” Since then, Aglipay began volunteering for festivals in Southern California and later helped with the creation of the Long Beach Filipino Festival in 2018.

“We can be influential. We can be movers,” Aglipay said.

Little Manila: A second glance at the culture of West Long Beach