The first time I walked into Scholb Premium Ales at 2306 E. Fourth St. was Jan. 26, 2020. I know the exact date because I had been out for a long morning walk that had turned into a lunchtime stroll, and just as I was getting hungry and thirsting for a beer I happened to be passing by the new addition to the Retro Row strip.

I bellied up to the bar and checked out the walls lined with old photos of Long Beach surfers and beachgoers from back when this was a beach city and not merely a city with a very long beach. I had just started looking at the menu and list of taps when I looked up at the screen over the bar and saw the headline that Kobe Bryant had died, a fact that I announced aloud only to be met with the voice of a woman also seated at the bar who responded by saying: “No sh*t Sherlock, what planet have you been on?”

By that point, Scholb Premium Ales, the first satellite taproom for the Torrance-based brewery which opened in October of 2019, was a little better than three months old and was following the pattern of any new business building an environment of comfortable regulars. But when the great lockdown of 2020 happened six weeks later, all of the rules of restaurant survival went out the widow and those regulars became its lifeblood.

“LA County for some reason shut breweries down harder than restaurants and having the restaurant allowed us to maintain some revenue,” owner and brewer Jason Kolb recalled to me in an email.

Before being a brewer, Kolb was an engineer working in long-range planning for Chevron’s El Segundo refinery but admits that after 16 years he started making his own long-range plans. “[I’ve] been brewing for over seven years now [and] brewing beer is much more fun than making gasoline,” he says. “You never see a smile on someone’s face when they fill their car up with gas.”

The name comes from an evening when Kolb was drinking a bit too much with a homebrew buddy whose last name is Schultz, and the occasion was dubbed “getting Scholbed,” and the name stuck.

When asked why he chose Long Beach, Kolb said that it just made sense, and that there was a great culture and vibe that resonated. “We found a recently closed restaurant with good rent—we literally signed a lease and opened three months later.”

He was speaking of the former artisan pasta joint P3 that vacated the space, a restaurant that suffered the fate of so many restaurants that slowly fade out as the quality of their food declines a little bit more with every visit.

Now under the direction of chef and general manager Jason Lawlor, Scholb Premium Ales makes it seem as if P3 never existed with his rotating menu that changes seasonally, and accordingly for different holidays. This month Lawlor is featuring short rib, mussels with Andouille, and is also testing a chicken sandwich with house-made kimchi. Some of the items on the menu are staples, such as wagyu beef burgers ($17), and mac & cheese ($10).

The mac & cheese is penne pasta folded into a blend of cheeses as delicately as folding yolks into stiffly beaten egg whites to make a soufflé. Sprinkled with fresh parsley, each bite is a warm and gooey, sharp and creamy, comfort food perfection. A blend of cream cheese as the base offers the perfect texture, balanced out with a couple more cheeses including white sharp cheddar and topped off with their Bon Fuego, a brown ale made with cherry wood smoked malts to round things out with a smoky tang. 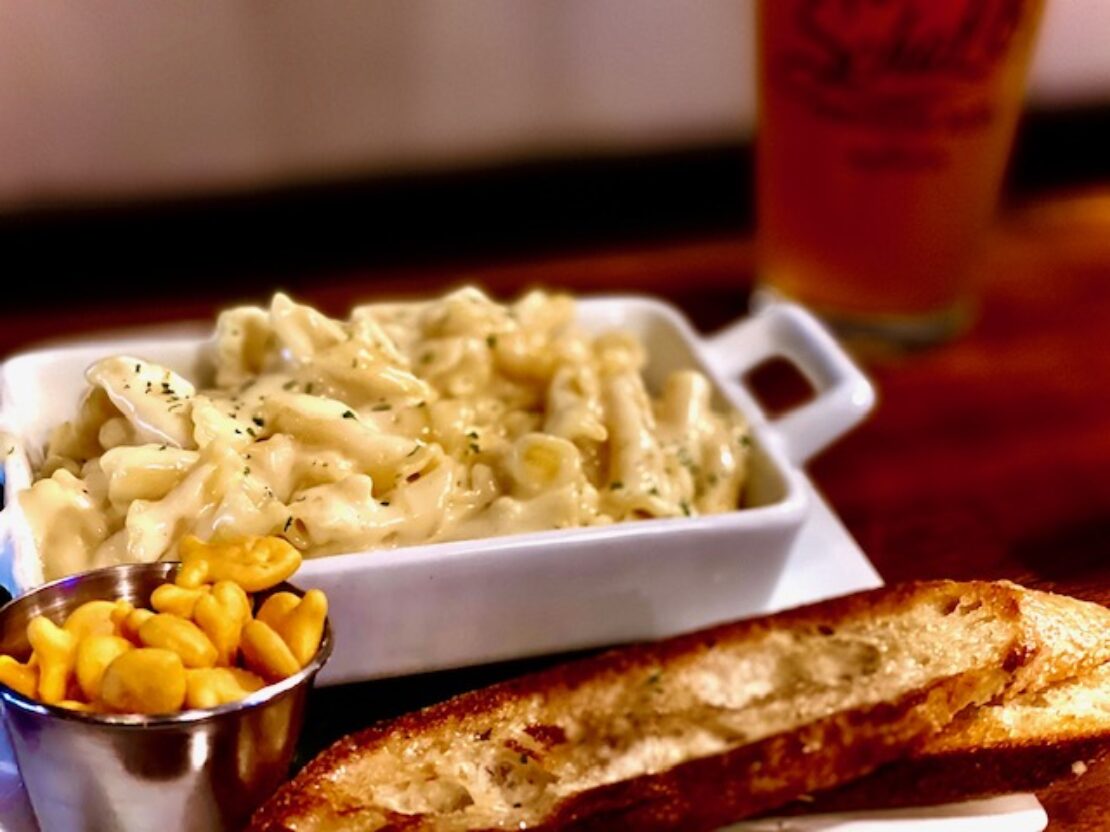 This is an elevated mac & cheese for the purists out there that don’t want any surprises. Here’s a tip: The mac & cheese comes sprinkled with goldfish crackers, but you should get them on the side. Not that I have anything against goldfish crackers mind you, they just have their place and their place isn’t here as a topping. That being said, while the crackers add nothing to the top of the mac & cheese they do have an important function: They are the perfect palate cleanser. Munch a few before each sip of beer otherwise the beer is no match for this rich, dense, full-bodied utterly satisfying cheesiness.

Chef Lawlor is a Long Beach native who strives to elevate all his food to a “Long Beach kind of style,” which he describes as a California style but with a funky twist. “I love this city and we tried to show that love with the décor and styling of the restaurant,” he said. 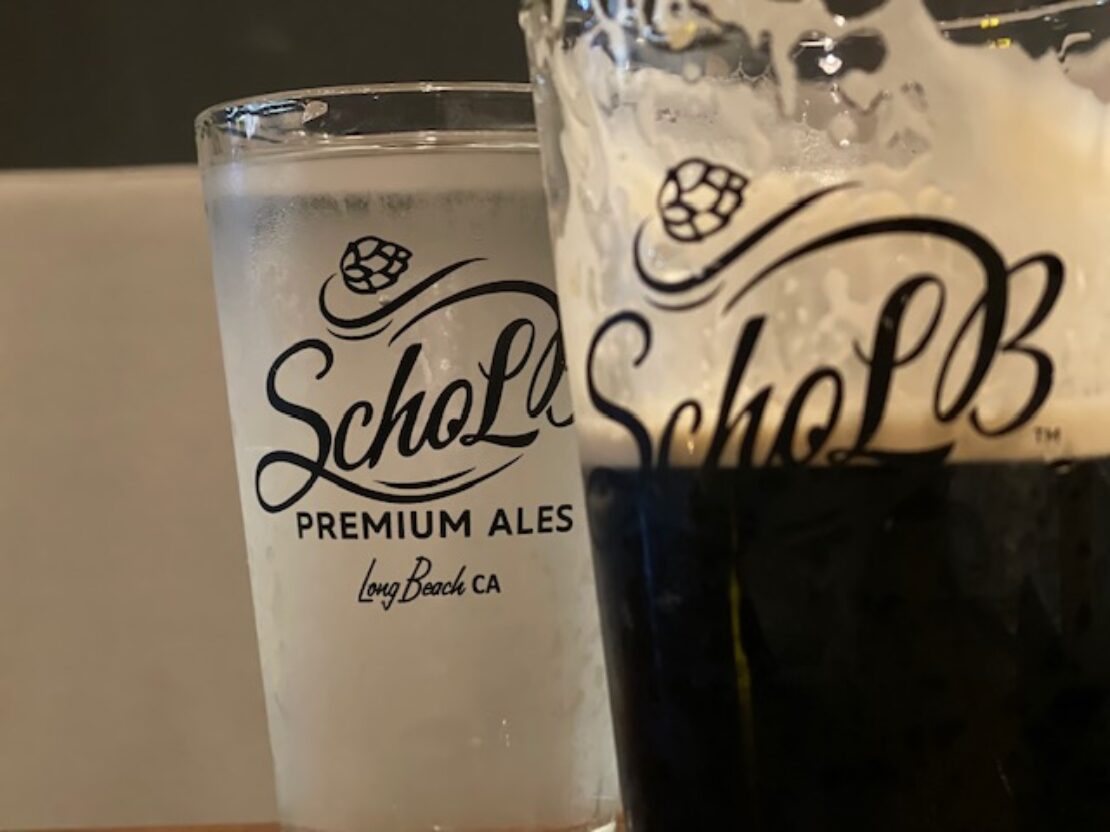 A pair of pints at Scholb. Photo by Matt Miller.

With 20 years of experience, Lawlor has cooked in Hawaii and spent a few years as a pitmaster making Texas-style BBQ, and says while he loves every style of food as long as it’s well made, he’s a steak and seafood guy at heart—something that certainly comes through if you go for the steamed clams ($14).

A pound of beautifully sweet mollusks in a bath of intoxicating broth with aromas of butter, white wine, scallions, garlic, and shallots. A squeeze of grilled lemon adds a bright and smoky complexity with just enough acid to cut the richness of the broth and elevate the aromas of the ocean. Be sure to slurp some of the broth right from the clamshell as you delve into one morsel after the next.

The addition of grilled cuts of sourdough is like a lock and a key when dipped into the broth to stir everything around and release aromas of low tide and salty spray, and the char on the bread from the grill adds a savory layer to each broth-dripping crunch that you’ll keep returning until your last charred soupy bite.

Note: another reason to order the mac & cheese is that it too comes with grilled bread, which is about a superfluous to the dish as a sprinkling of goldfish crackers, but like the crackers, the bread has a totally different use because you’ll need that extra bread to sop up every drop of the broth from the clams that you can. (Recommended pairing for both the mac & cheese and the steamed clams: Moon Tide—a light, crisp, and citrusy blend of Citra, Centennial, and Mosaic hops against a wheat and malt backbone. Bright and clean, perfect for seafood, but with enough flavor and oomph to stand up to the fattiness of the cheese.)

Another notable item on the menu is the jalapeno-pickled egg ($2). As a firm believer in the sanctity of the pickled eggs at Joe Jost’s, this might be a contender. The nearly sour acidity of the brine, the hint of heat, and a dash of smoky paprika blend seamlessly with the yolk to transform a texture that is normally quite chalky into a deliciously creamy sensation.

The egg is served on a bed of goldfish crackers that are there to absorb the tangy brine and the two flavors marry exceptionally. Oddly enough, the combination pairs perfectly with the Fog Topper dry nitro stout.