On a Thursday morning in Bellflower before the sun crests the horizon, a droopy-eyed Jesse Hellen-Lloyd breaks the quiet of a still morning with the crack of a steel oven door. Hot air billows from a Rofco miniature deck oven stationed on his patio as Hellen-Lloyd deftly slides in raw, doughy mounds of country loaf into the oven, and snaps it shut.

For the next eight to 10 hours, he’ll repeat this process methodically, timing each of the 12 bread varietals he creates to their exact and particular bake time.

The 38-year-old baker makes an about-turn, and walks through a squeaky door into what was once his single-car garage to record his most recent bake time on his laptop. Then, he takes all of two steps to a cutting board tabletop behind him and begins to slice, with a bench scraper, a large slab of raw ciabatta dough into square sections.

“We built out our garage, it took about a year,” the baker said of his narrow workspace. “Tore it out, gutted it, put new walls in, redid the floor. Everything. I didn’t come in like, hey, I’m going to put a bakery in my garage…but it developed as [the business] grew.”

What started in 2016 as an appealing new side-hustle for the former audio engineer has emerged into an all-consuming career with his wholesale baking business, Hey Brother Baker.

Seven days a week, Hellen-Lloyd and his musician-wife Christina Wilson work from home, churning out hundreds of loaves of ciabatta, baguette, country loaf, levaine, alpine rye, burger buns, and more to restaurants and coffee shops in Long Beach and Artesia.

Of these are Heritage Sandwich Shop, which boast Hey Brother Baker’s breads as the base for all their sandwiches, Commodity, Solid Coffee Roasters, Berlin Bistro, Scratch Baked Goods and the new cheese shop on Retro Row, Oh La Vache. Before it’s recent closure, Restauration was Hellen-Lloyd’s biggest client.

By 8:30 a.m. Wilson—admittedly not a morning person—swiftly joins her husband to help with shaping and folding the formless doughs into structured shapes. Though her apparent ease at rolling betrays her rocky start.

At the onset of the COVID-19 pandemic, the singer and musician lost her live performance gigs and jobs as a music educator at Jewelbox Children’s Theatre and the Torrance Arts Academy.

Though happy to spend her newfound free time helping with the bakery, which was seeing higher demand through the pandemic, she admits there was a fair amount of crying and a handful of mistakes on her part.

“I haven’t been a student at something in a very long time,” the 35-year-old said. “So now I’m back in this, like, oh, you’re bad at this. And you’re probably going to be bad at it for a while because it’s new. But I have a good support system.”

Though Hey Brother Baker is not the first, nor the last of the burgeoning artisanal-bread scene in Long Beach that’s sprouted in the last five years (Colossus Bakery and Gusto Bread being notable examples), Hellen-Lloyd said he’s pleased that the desire and taste for high-quality bread is finally reemerging in the American psyche.

“There does seem to be a little bit of a heyday for for artisan bread,” he noted. “”I feel like I’m introducing them to something new, which is fantastic.” 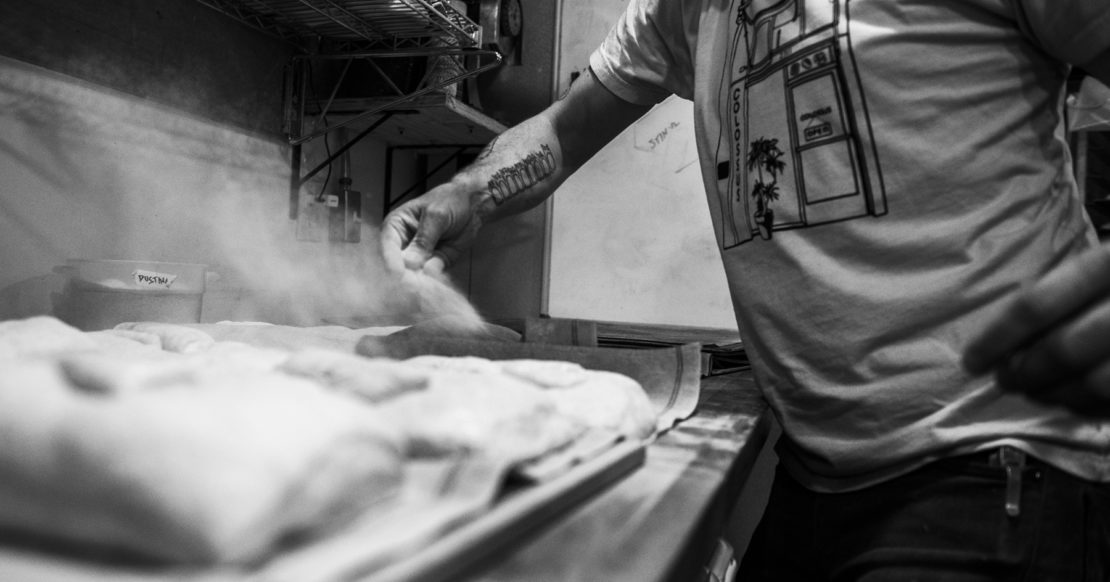 Jesse Hellen-Lloyd dusts his ciabatta dough with flour before shaping it into its final shape while working in his bakery. Photo by Thomas R. Cordova. 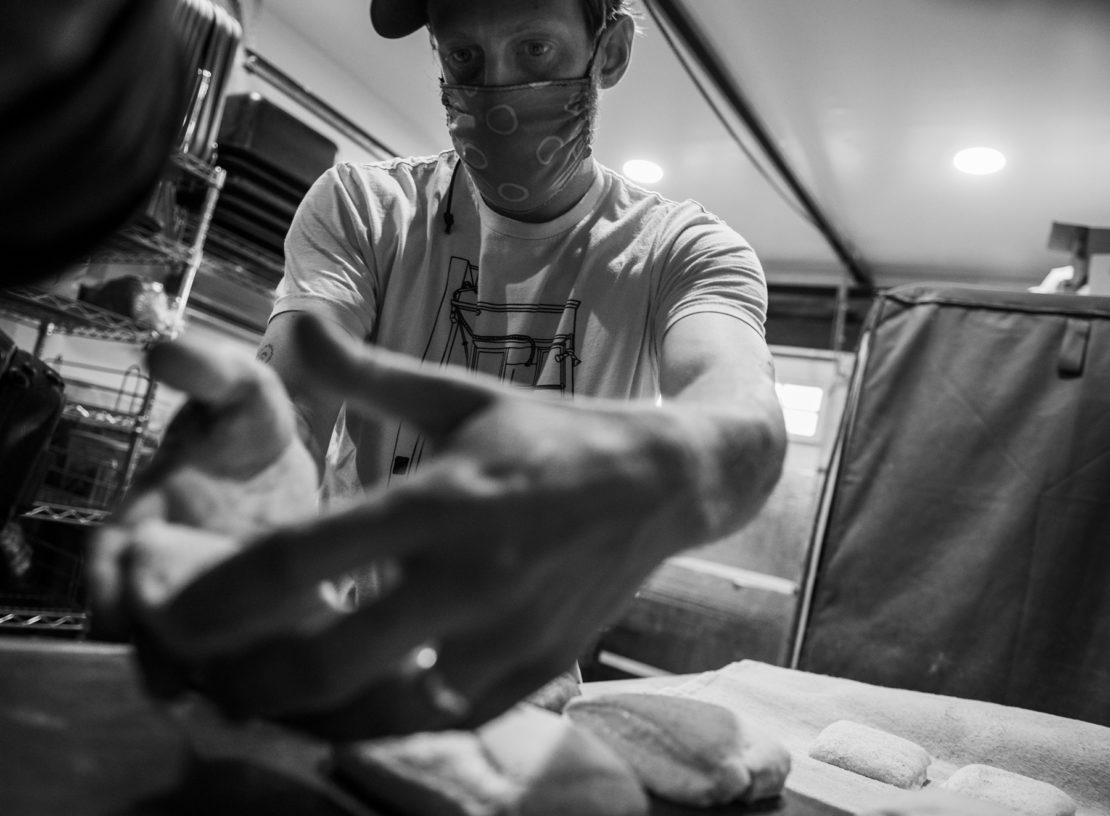 Jesse Hellen-Lloyd lines up the ciabatta dough after shaping it while working in his bakery. Photo by Thomas R. Cordova. 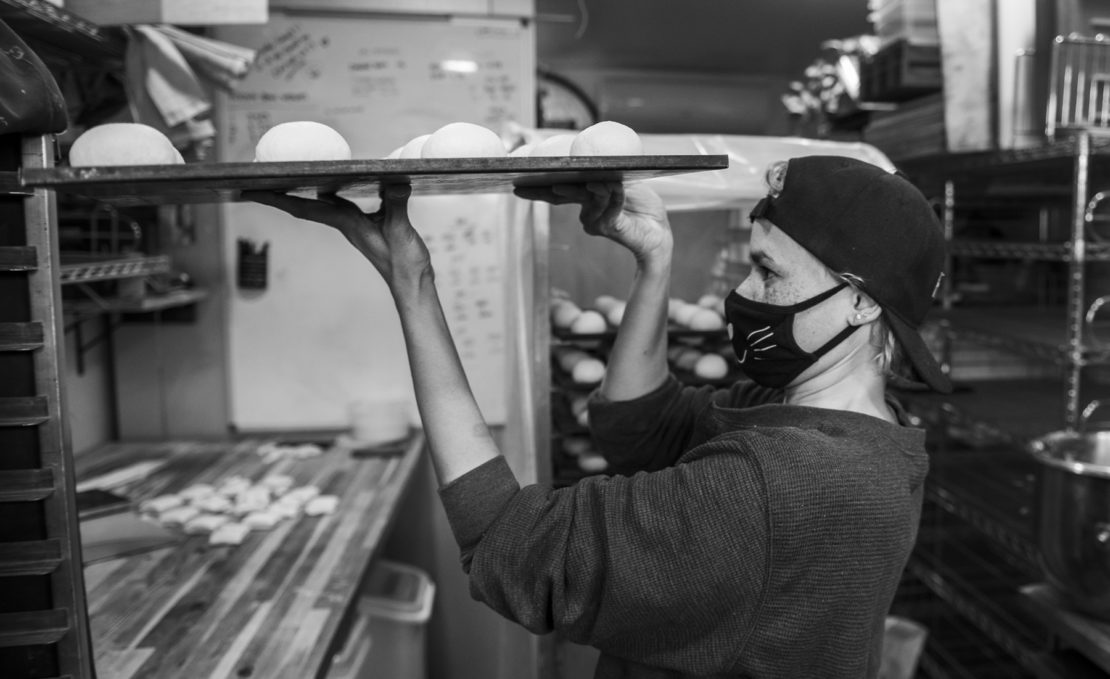 Christina Wilson places the brioche dough into a proofer to allow the dough to rise before baking. Photo by Thomas R. Cordova. 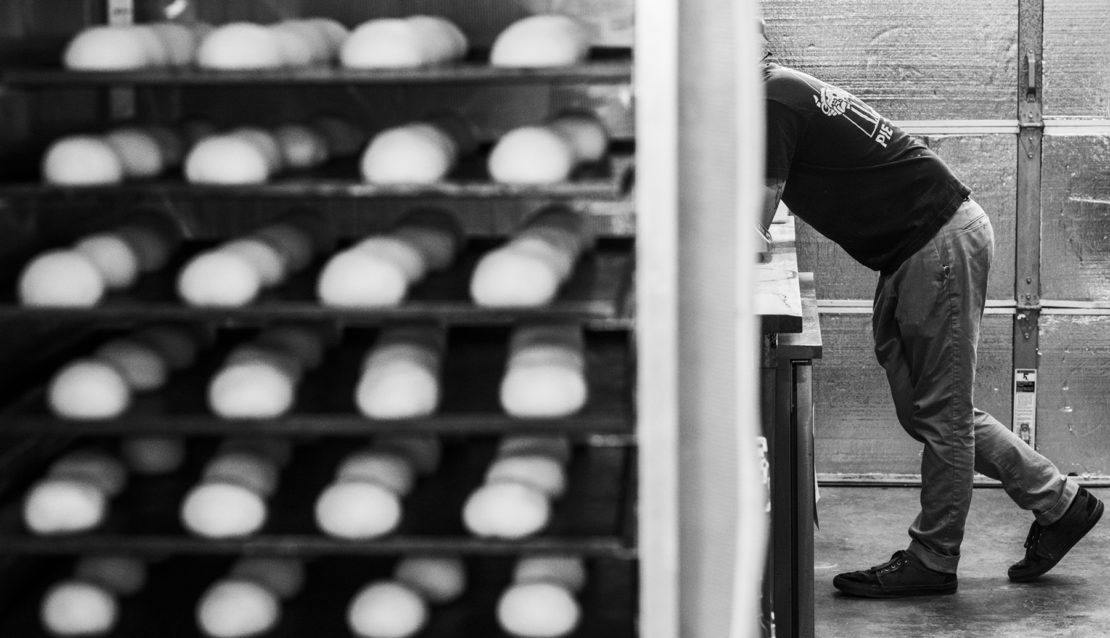 As the brioche dough is in the proofer to allow the dough to rise Jesse Hellen-Lloyd keeps a record of every bake on his laptop. Photo by Thomas R. Cordova. 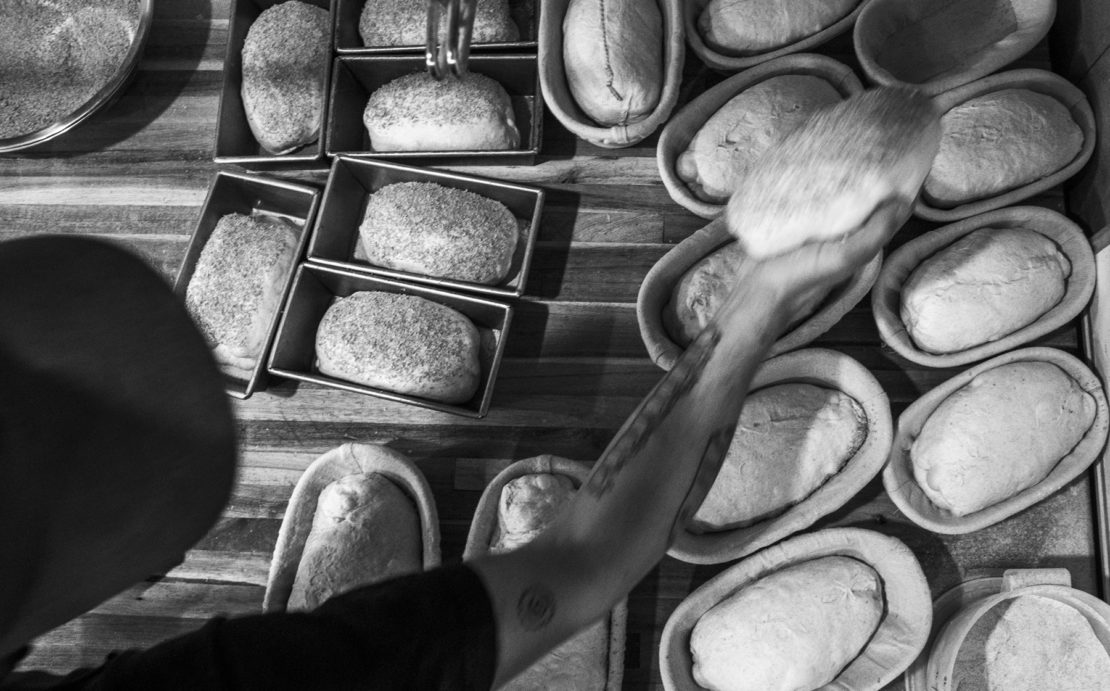 Shaped dough is placed in a bamboo bread proofing basket as Jesse Hellen-Lloyd works in his workspace. Photo by Thomas R. Cordova. 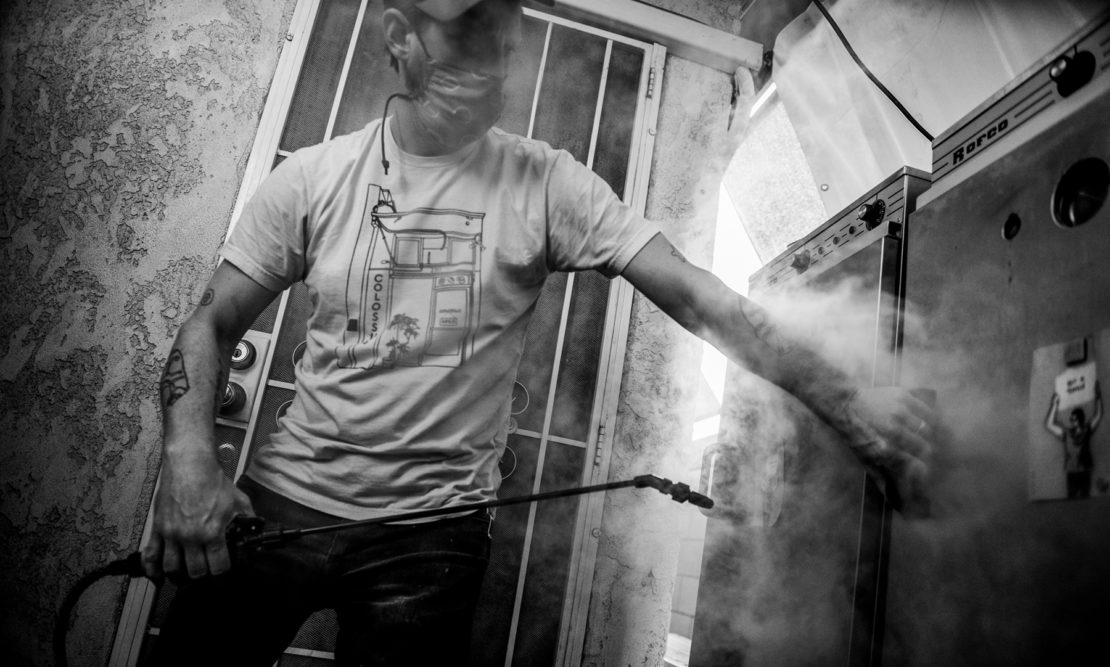 Jesse Hellen-Lloyd closes the door to one of his ovens after steaming. Photo by Thomas R. Cordova. 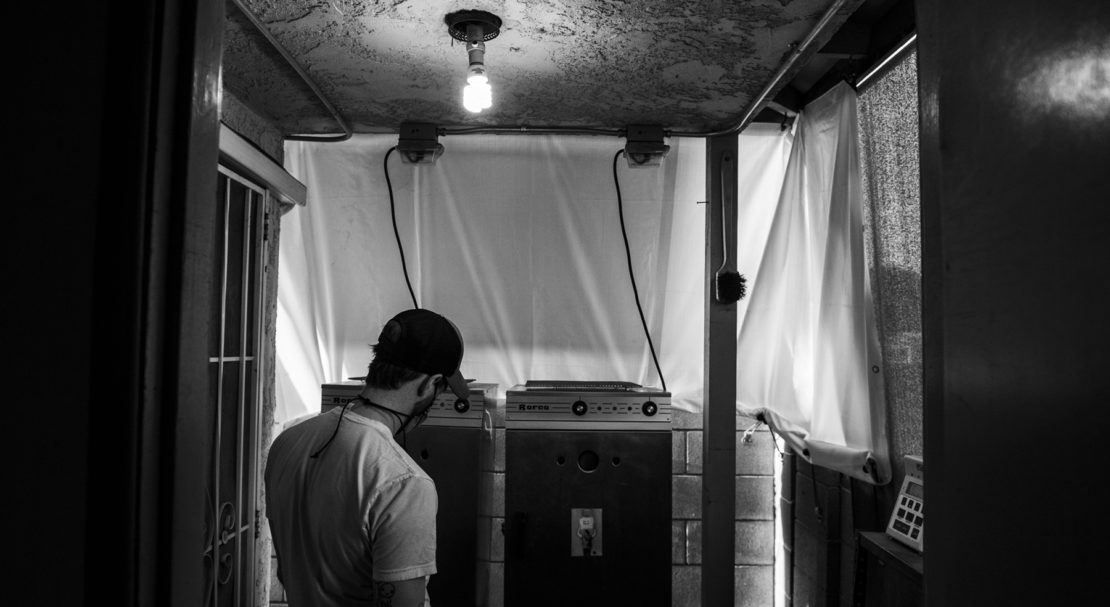 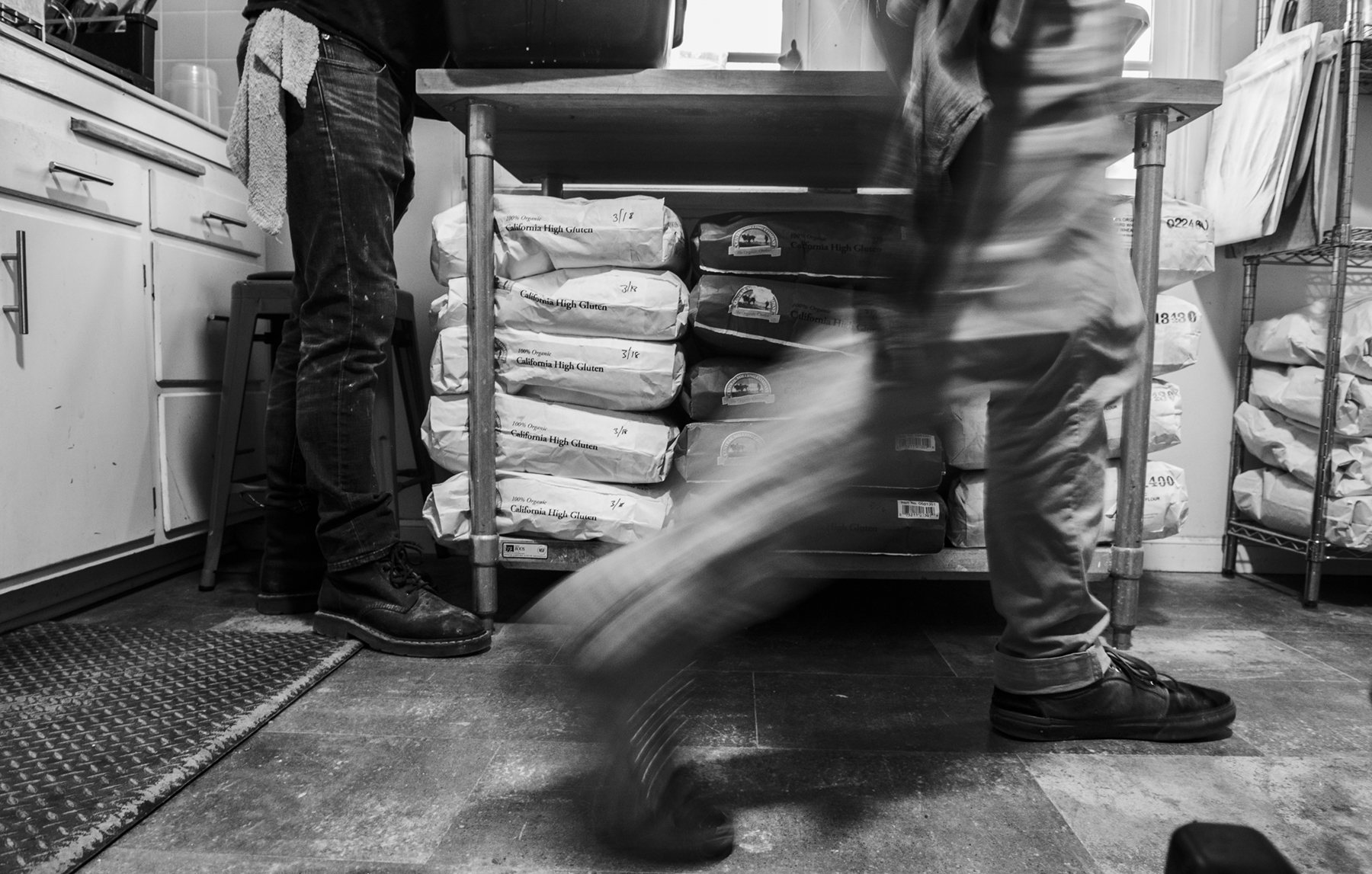 Bags of flour are stacked up under a work table at Hey Brother Baker. Photo by Thomas R. Cordova. 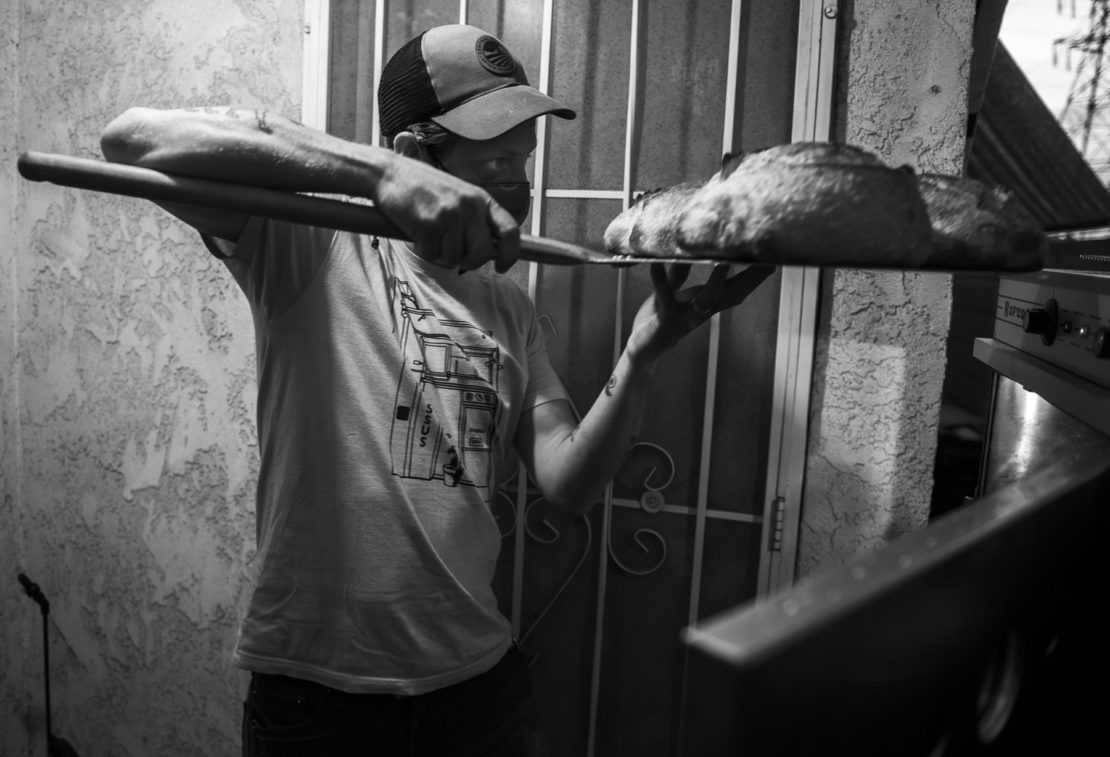 Jesse Hellen-Lloyd takes loaves of baked bread out of his oven during the early morning while working in his bakery. Photo by Thomas R. Cordova. 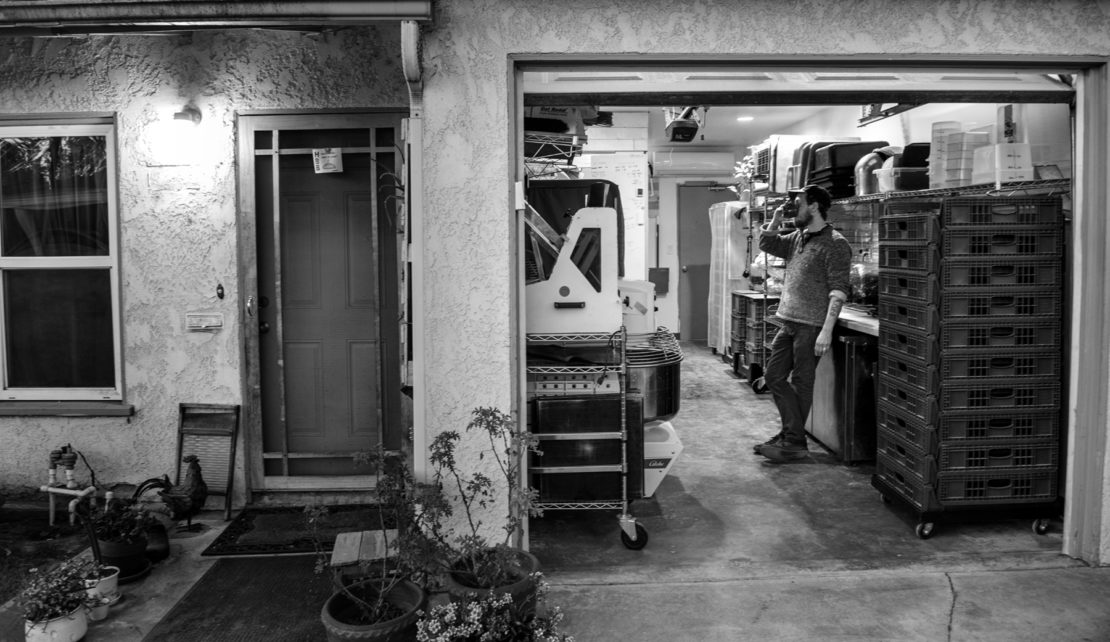 Jesse Hellen-Lloyd enjoys an early morning coffee during a break from his baking out of his one-car garage bakery in Bellflower. Photo by Thomas R. Cordova.