Question: what connects a specific food to a country, or a specific group of people? What exactly makes a food authentic? There are so many foods we eat today that aren’t as much fancy fusions, as they are cultural mashups, so much so that sometimes the line is blurred.

For example, the English muffin was invented in New York, the chimichanga was invented in Phoenix, the fortune cookie in San Francisco, and the French dip right up the road in LA, just to name a few.

The list below are some of my favorite mashups that I’ve had in Long Beach, some you might not have tried but should, others I’m sure you’ve had, but didn’t know they were mashups.

Lacquered has a perfect mashup of a burrito stuffed with grilled farmer’s market vegetables and sautéed garlic noodles with a bit of melted cheese to hold everything together.

Naturally, when I thought of noodles with vegetables wrapped in a tortilla I figured it was going to be a mess to eat, but the melted cheese has a way of keeping things in place. The vegetables are so fresh that they snap when you bite into the oh-so-satisfying “burrito” with a refreshing crunch. Notes of char on the vegetables lend a nice depth to the flavor, along with the caramelization on the noodles from being sautéed in savory garlic sauce. 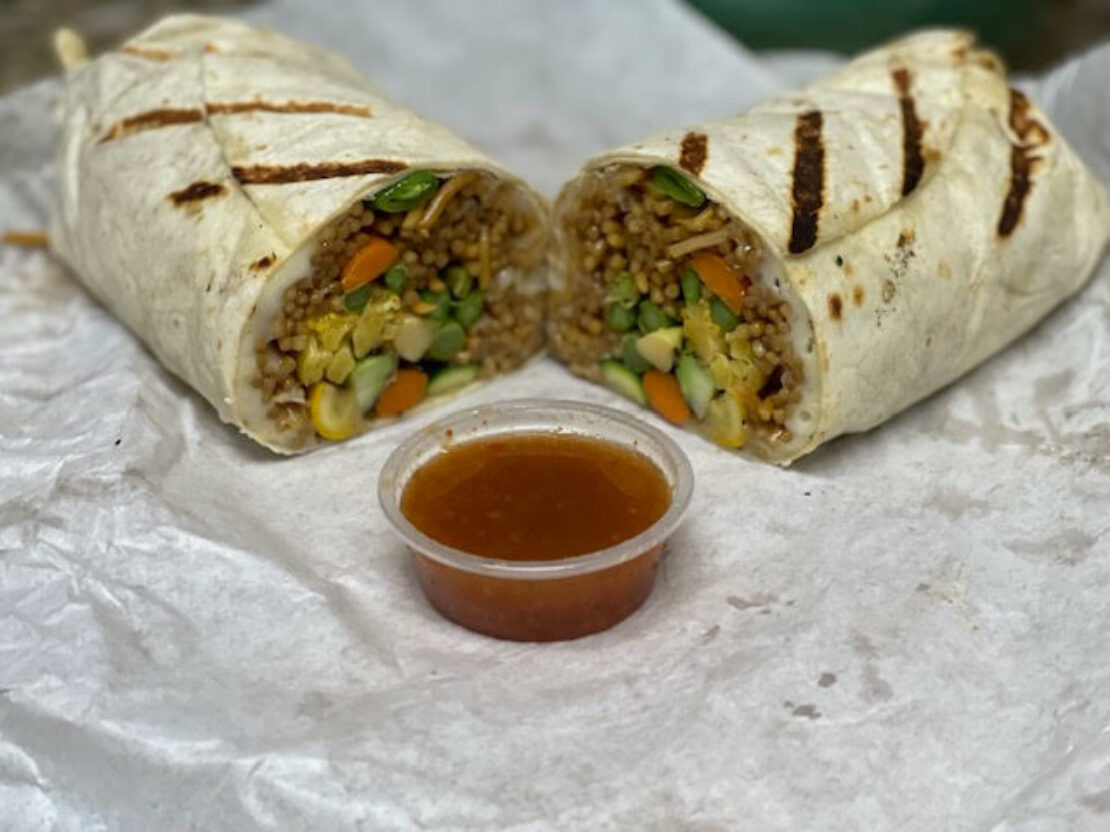 If you’re a runner who’s into carb-loading then this might be your ultimate dream food—and if you’re like me and not a runner, this might be the food of your dreams.

The Thai curry pizza at the pizza joint of the same name is a wonderfully fun reinvention of Americanized pizza. Sweet aromatic curry with a thick coconut milk base replaces the tomato sauce, taking on more of a white sauce role. Bean sprouts, bell pepper, onion and sweet Thai basil complete the flavors of a Thai curry; all that’s missing is the rice, and the heat—but you can request a bit of tangy Thai chili sauce on the side. 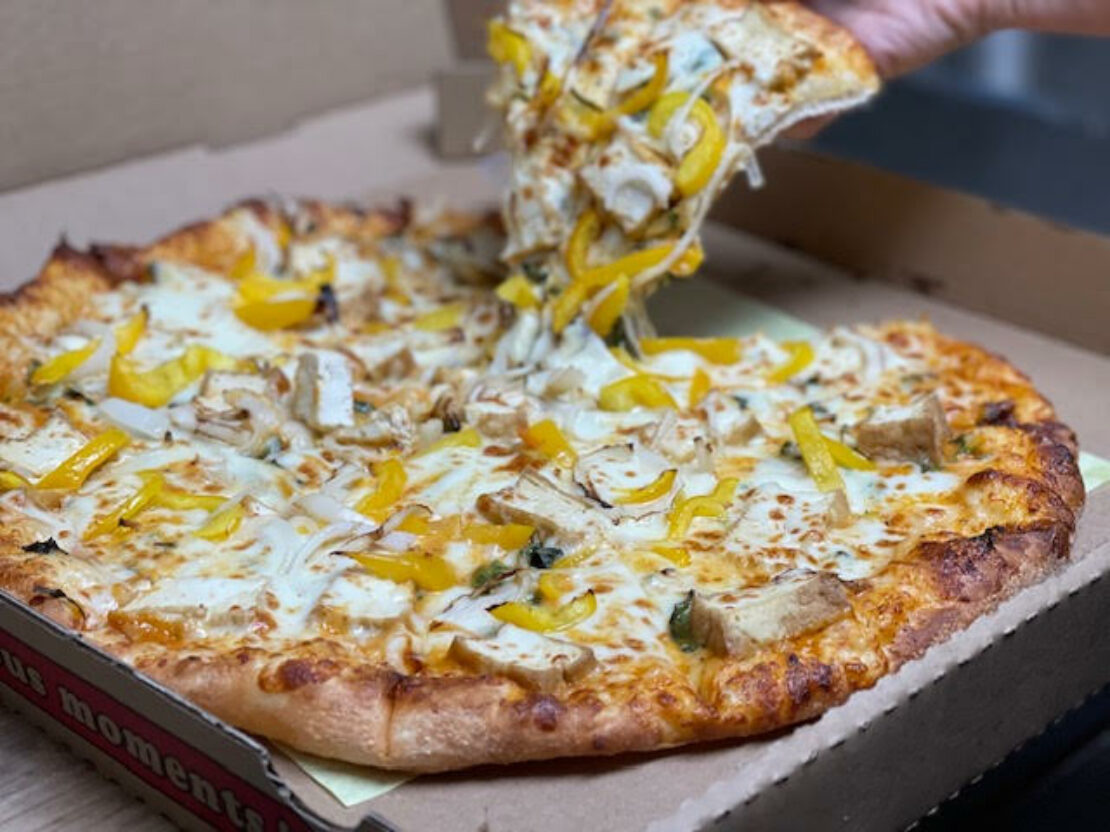 If the crust were handmade rather than that frozen processed crust too commonly used in the making of pizza in Long Beach, this would land in the top-10 best pizzas I’ve ever eaten.

Auld Dubliner offers three fun mashups that are worth the stop:

Corned Beef and Cabbage Taco ($3 each): Corned beef and cabbage tacos with horseradish mayo and pico de gallo are a wonderfully tasty hybrid of Irish, Mexican, and a bit of Jewish cuisine. What looks like a simple street taco at first glance is actually something completely different—and after that first bite, you realize you’re eating a culinary rollercoaster!

A brunoise of succulent corned beef morsels in a healthy pile, slathered with horseradish mayo, and topped with shredded cabbage and pico de gallo, all resting on a moist flour tortilla.

Creamy mayo laced with horseradish replaces the cilantro cream or “Baja sauce,” and reels you in adding the idea of a playful kick that never quite arrives. The flavor hearkens to eating a corned beef sandwich on the Lower East Side of Manhattan or sinking your teeth into a Reuben, but then the cool freshness of the pico de gallo pulls your taste buds back to SoCal as everything melds together. Yum! 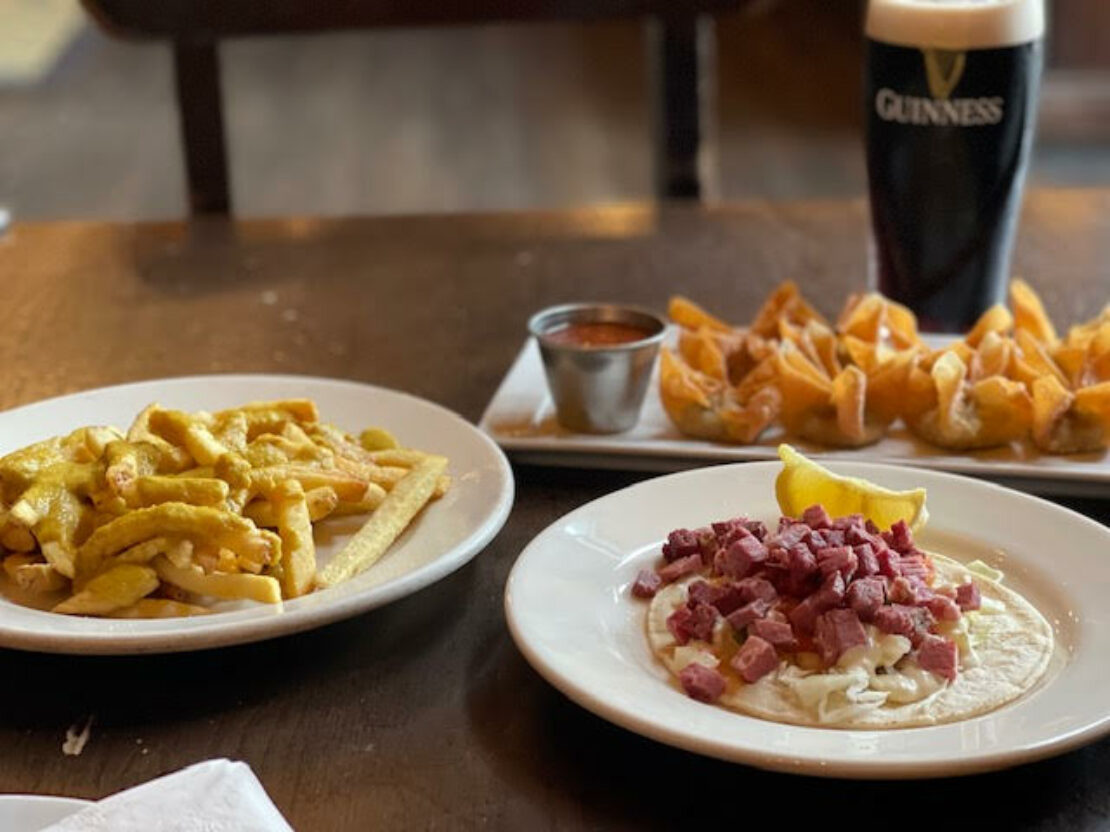 Curry Chips ($5): Complex and aromatic, this basic yellow curry, spinning with turmeric, cumin and coriander adds a sort of sweetness when generously ladled over the chips (fries). A dash of salt over the top acts as a net holding the different flavors together, giving the fried potatoes their own familiarity and making the curry a much more interesting flavor.

It’s a unique mashup because while most people associate curry with India (among many places) the name curry is in fact a British anglicization of the Tamil word kari, meaning sauce. It seems curry chips were introduced to England and Ireland by Chinese immigrants in the 1970s when fish and chip shops started becoming Chinese takeaway. The chips were kept on the menu for the English and Irish customers seeking the comfort of the ultimate hangover cure, but topping them with curry seemed the best way to merge chips with other items on their menus, like curry, and it stuck.

Banger wontons ($9): These are just as they sound, Irish pork sausage with onions wrapped up in wonton wrappers and deep-fried, served with a dipping sauce that’s both earthy and tangy with just a hint of spice made from UK’s favorite HP sauce, mixed with a touch of U.S. hot sauce.

A little on the gamy side, and extremely oily, but it’s easy to see how this late-night bar snack would be an absolute craving after a few pints.

How is Bahn mi a mash-up?

When the French occupied Vietnam in the 1850’s they insisted that the Vietnamese learn how to bake their precious baguettes with the flour they were shipping in with their other supplies, since bread was a staple of the French diet (I’m paraphrasing, obviously to keep this history brief). Bread, however, was considered far too valuable to allow the Vietnamese people to eat. The French felt the Vietnamese not worthy since they easily lived off of rice and sea fare.  Long story short, when the French moved out of Vietnam in the 1950s, the local people were free to put whatever they wanted onto the baguettes, traditionally made with French ingredients like pate, mayonnaise, sardines, butter, and cheese. But the Vietnamese preferred bean sprouts, peppers, pickled vegetables, and the freshness of native cilantro. 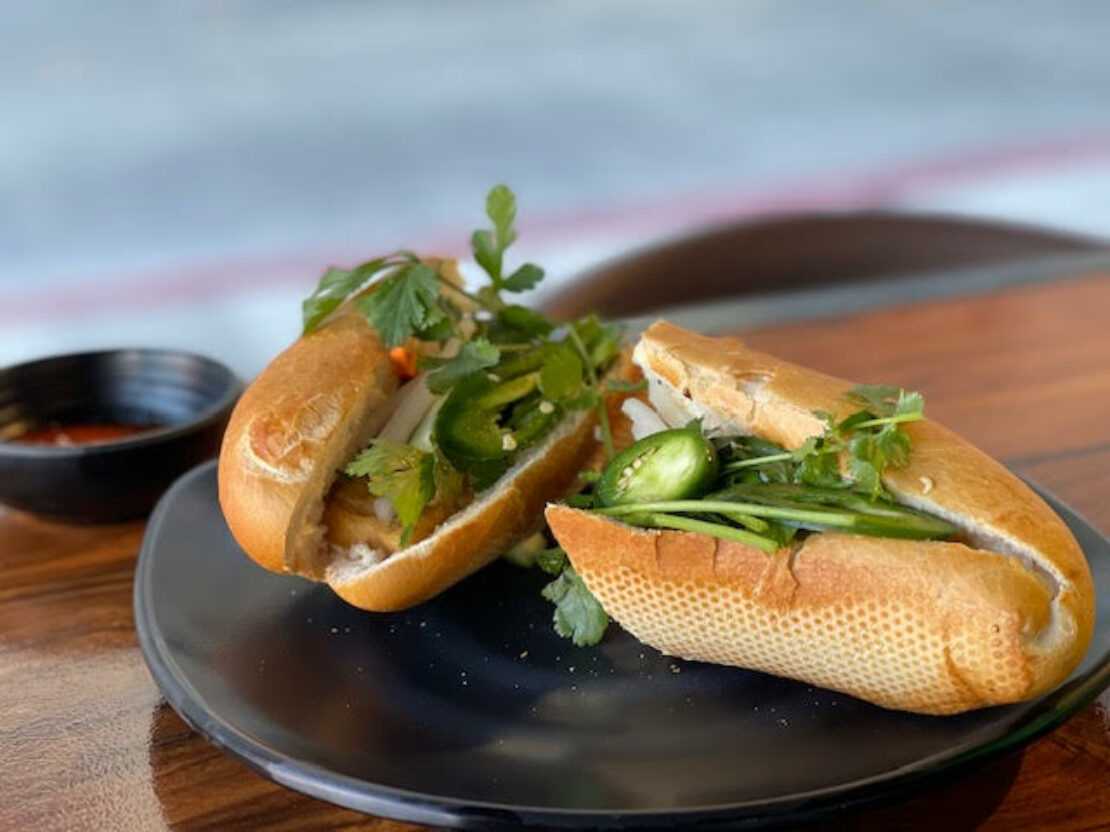 The most authentic was at KC’s Banh Mi ,1171 E. Anaheim St., offering classic ingredients like paté and sardines($5.98).

This final cultural mashup story is my favorite because, while a good Caesar salad is a great thing, a true classic Mexican Caesar salad is very hard to find. Sure, there are a few Mexican restaurants that have a Caesar salad on the menu, but they always try to infuse the salad with Latin American ingredients when there’s no need because the Caesar salad is—well, technically speaking—a Mexican dish.

Enrique’s makes the list for its classic Caesar salad: Romaine, with a house-made anchovy dressing (which in this case seems to be a little bit closer to a mayonnaise base than an actual Caesar dressing, and seems to omit the dash of Worcestershire sauce) with rich flavorful flecks of anchovy, along with house-made croutons and shaved Parmesan. 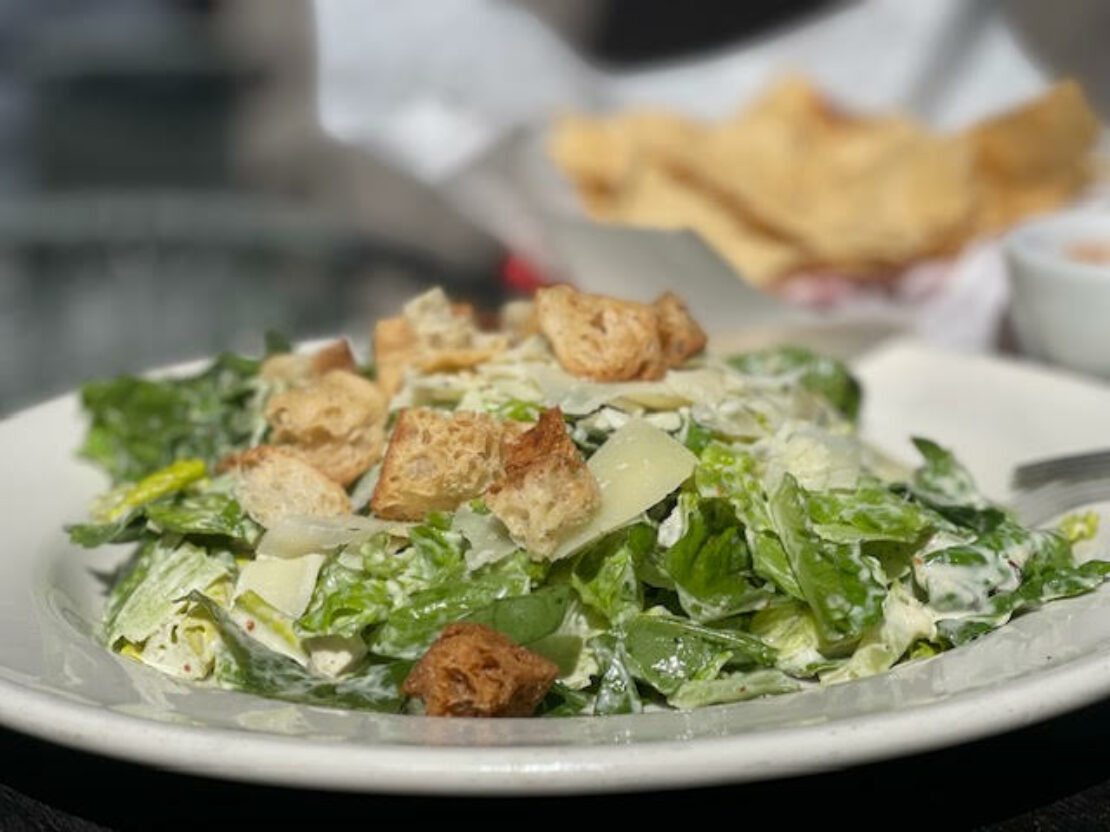 Invented by Caesar Cardini (although there are disputes to this claim), the Caesar salad was the alleged creation of an Italian-born chef who cooked French food for Angelinos in Tijuana looking to scoot around Prohibition. Now, if that’s not a mashup, I don’t know what is.

A Caesar has just a few simple ingredients: romaine lettuce and a dressing made from anchovy, olive oil, egg yolk, lemon, and Worcestershire sauce topped with a sprinkling of croutons and Parmesan, and that’s pretty much what Enrique’s Mexican Restaurant serves, and it’s the only Mexican restaurant in town making the classic dish.