After opening a dog park on its western end in 2017, the final phase of Bixby Park’s revamp of its northernmost parcel of land has formally begun and will be completed in August of this year, according to the office of Councilmember Jeannine Pearce.

The $350,000 renovation, funded through Measure A, will begin in two phases: The first will be its most major, the construction of a fountain surrounded by landscaping with two paths, one east and another west, jutting from the fountain toward the park’s edges, as well as the installation of new bollard lighting. The second phase will be to connect the main paths with additional walkways and new exercise equipment similar to the ones installed in other parcels of the park as part of its “fitness loop.”

“Bixby Park will be a place for friends to gather, for pups to play and for people to find peace in our urban core,” Pearce told the Long Beach Post. “I’m truly thankful for the Friends of Bixby Park organization, Friends of the Dog Park group, Mayor Robert Garcia, and Public Works, all of whom helped ensure the community vision is carried out.”

Bixby Park has seen a huge shift in its appearance over the past six years following a push from the 2nd District’s former councilmember Suja Lowenthal, who led community and park design meetings to figure out what residents were seeking.

At the time, Bixby Park Master Plan dated back to 1991. Lowenthal and the Friends of Bixby Park group, created around the same time to address the park’s uplift, both felt it was time to approach one of Long Beach’s best-known and most-utilized park spaces with a more contemporary eye—despite the organization’s oftentimes open critcism of Lowenthal’s efforts

For instance, Lowenthal backed and supported a more radical plan to close off the Second Street connection that cuts the park into its northern two parcels, keeping Ocean Boulevard and First Street as the sole arterials cutting through the park. This would have added an additional acre of park space. Friends of Bixby Park argued that the loss of parking would be a detriment for the neighborhood as a whole and urged a large swath of dissent against the closure of any streets.

There was, however, many single aspects of agreements to be found. One major complaint from surrounding residents was that its entryway from Broadway lacked aesthetic appeal; this project is a direct response to that concern, a result of Pearce having a much more friendly work relationship with the park organization than her predecessor. 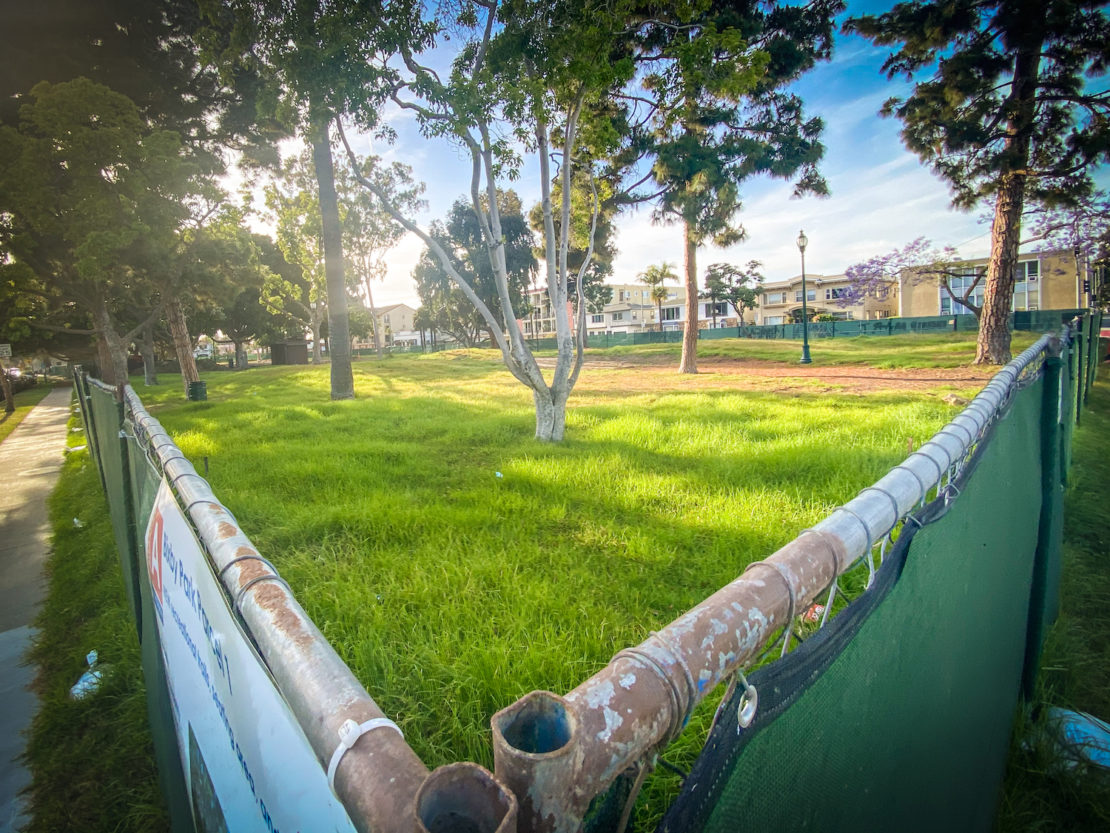 Bixby Park’s northern parcel is now fenced in to make way for a rebuild as seen on May 16, 2019. Photo by Brian Addison.

Pearce was successful in scoring the Measure A funds in March of 2019, part of her major efforts to get the Bixby Park revamp plans back up to some tangible progress after the bluff was renovated and the fitness loop complete.

Other aspects of that updated master plan have already come into fruition. The fitness loop and, perhaps most stand-out, the revamping of the park’s entire bluff in 2014 to create ADA-compliant access to the beach below, are just two examples of the work behind revitalizing Bixby Park.

Bixby Park is an essential neighborhood connector and, in that sense, is unique: Separated into four parcels via Ocean Boulevard, First and Second streets, and Broadway between Junipero and Cherry avenues, it is home to the bluff while offering a green space that connects Bluff Heights and Alamitos Beach.