A song for the dead: Mariachis comforted families who lost loved ones to COVID-19 • Long Beach Post News
- ADVERTISEMENT -

After a year like no other, Rodrigo Rodriguez’s mariachi band, Mariachi Romanza, is once again being booked for weddings and quinceñeras.

The North Long Beach band stopped getting invitations to play at these large-scale celebratory events because of the COVID-19 pandemic, but funerals were an exception.

The song title translates as “eternal love.” As the lyrics suggest, it’s about losing a loved one and yearning to be with them once again. It’s a melody that families often requested Roriguez to play during funerals for loved ones who died due to complications of COVID-19.

Three-quarters of the events Rodriguez was hired to perform at throughout 2020 were funerals or celebration-of-life events for families who lost someone to the virus, he said.

“It’s a high number for the ones we played at,” Rodriguez said in Spanish. The funerals took an emotional toll on Rodriguez. Witnessing children suffer the loss of a parent, or a family lose a prominent member, was tragic, Rodriguez said.

The pandemic also put an end to other celebratory events that mariachis are usually hired to play: weddings, quinceñeras and big family birthdays.

But funerals, even though they were prohibited under stay at home health orders to slow the spread of the virus, were aplenty.

Rodriguez said that there wasn’t a specific season last year where he saw an increase in the request for funeral appearances. Instead, it was a steady stream of bookings all year long.

“We never stopped—it was all year, every week.” he said. “A birthday or celebration of life because of a death.”

Rodriguez moved to Long Beach from Mexico City in 2001. For over 20 years, he’s performed as a professional mariachi, perfecting the violin, large bass guitars and flutes. 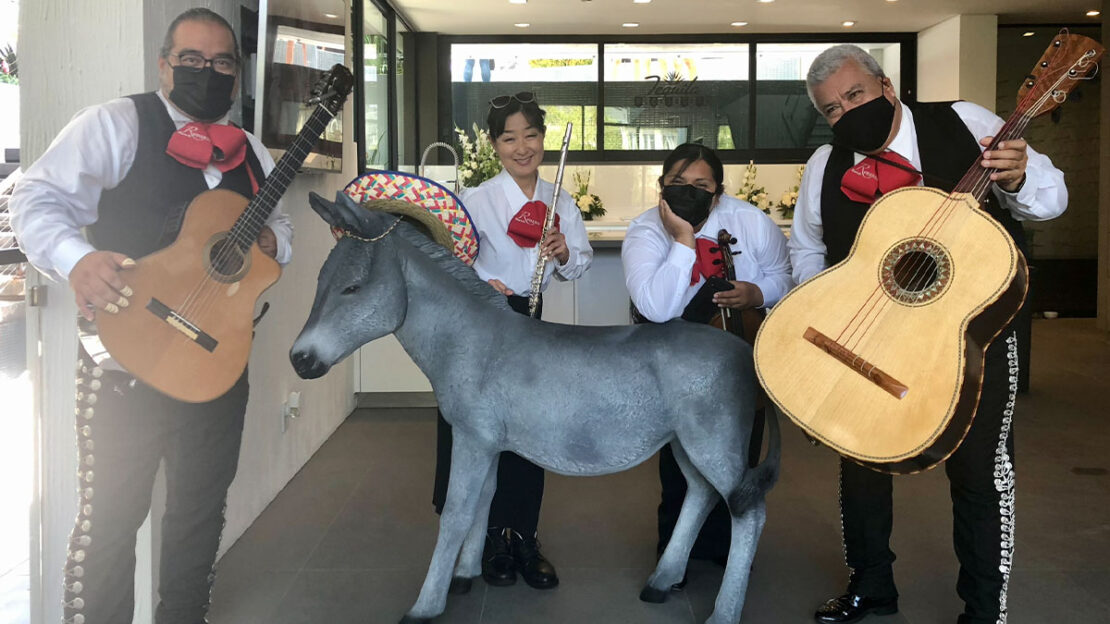 Many mariachis converge in East Los Angeles at a small Boyle Heights park dubbed Mariachi Plaza. Like many other entertainment industries, mariachi players faced financial hardships as a result of the pandemic, but it also took a physical toll on them.

Over 50 mariachi musicians have died of COVID-19 over the past year, Israel Moreno, president of the Organization of Independent Mariachis of California in Boyle Heights, told CalMatters.

Rodriguez personally knew seven musicians who died because of the virus and learned about others who perished through word of mouth.

Rodriguez said he did his best to protect himself and his band members from the virus when they performed at events.

They would wear masks as much as possible and stand over six feet away from the party that hired them. They wouldn’t travel together like they used to, Rodriguez said, and the band was cut down from eight musicians at a time to just two per event.

Whether he was hired to perform at Forest Lawn cemetery in Bixby Knolls or the All Souls mortuary just across the street, Rodrigez performed their songs outside and would text the client what songs they wanted to play.

But he said some of the older mariachis were too confident and often did not wear masks.

“Many mariachis I knew died,” he said.

Now, Rodriguez said there’s a new sense of appreciation among his band members and at the events that he’s performing at now. The pandemic taught him many lessons, but one that sticks with him is to enjoy the celebrations in life.

“People remember the good times,” he said. “After so much tragedy, we appreciate things more.”

But an eerie reminder of the sorrow of the pandemic echoes through the wedding receptions and birthday celebrations when families book his band for funerals and they still request “Amor Eterno.”

“They almost always ask for it,” Rodriguez said.