'A struggle that never ends': Amid summer of unrest, Black community looks to the future • Long Beach Post News
- ADVERTISEMENT -

In the 1980s, the Rev. Leon Wood, 80, thought a movement to address systemic racism had reached a turning point. It didn’t happen then—and hasn’t happened yet, he said.

After a grand jury decided not to bring charges against officers involved in the shooting of Breonna Taylor, he wasn’t shocked.

“At my age, I’m not surprised,” Wood said. “We grew up in that time where we don’t expect justice in the courtroom.”

The pain since last week’s decision has been overwhelming for the Black community, said Ebony Utley, a communications professor at Cal State Long Beach.

“It’s like a struggle that never ends,” she said.

As she struggles to come to terms with what the Black community has felt over the years, Utley said she doesn’t want the next generation to lose hope.

“I believed that things would change,” Utley said as she thought back to her college years.

Wood once stood where people like Utley stands today, and his message is that of moving forward.

“We think about unity a lot and the problem,” Woods said, “and very little effort goes into finding a solution.”

Pressure from activists and protesters over the past few months has provided an opportunity for a more wider audience to become aware of the issues people of color are experiencing, Wood said, and Black communities are coming together to speak out about what they see as unjust.

The most recent flashpoint came after the grand jury’s decision in Taylor’s case. She was a 26-year-old emergency medical worker in Louisville, Kentucky who was fatally shot in her apartment in March by officers executing a search warrant. Taylor’s name was a rallying cry for Black Lives Matter activists who took to the streets in protests.

The decision sparked an immediate reaction from protesters nationwide, including Long Beach, as a demonstration took place around the streets that evening near Martin Luther King Park in Central Long Beach.

Utley saw the grand jury’s decision as a “middle finger” to the Black community.

“Personally, in this moment, I don’t think it’s going to change,” Utley said.

Utley said that Black people are “always at the bottom of the problem,” and that it’s not just limited to policing but also experienced in instances of environmental racism and seen in the disproportionate impact of the ongoing coronavirus pandemic.

The decision not to charge officers for Taylor’s death, and instead charging a former investigator with wanton endangerment for firing bullets into neighboring apartments, once again sparked protests this month and only solidified the feeling of hopelessness some Black Americans felt.

Efforts to address mental health and trauma healing have also taken place alongside the marches this summer. 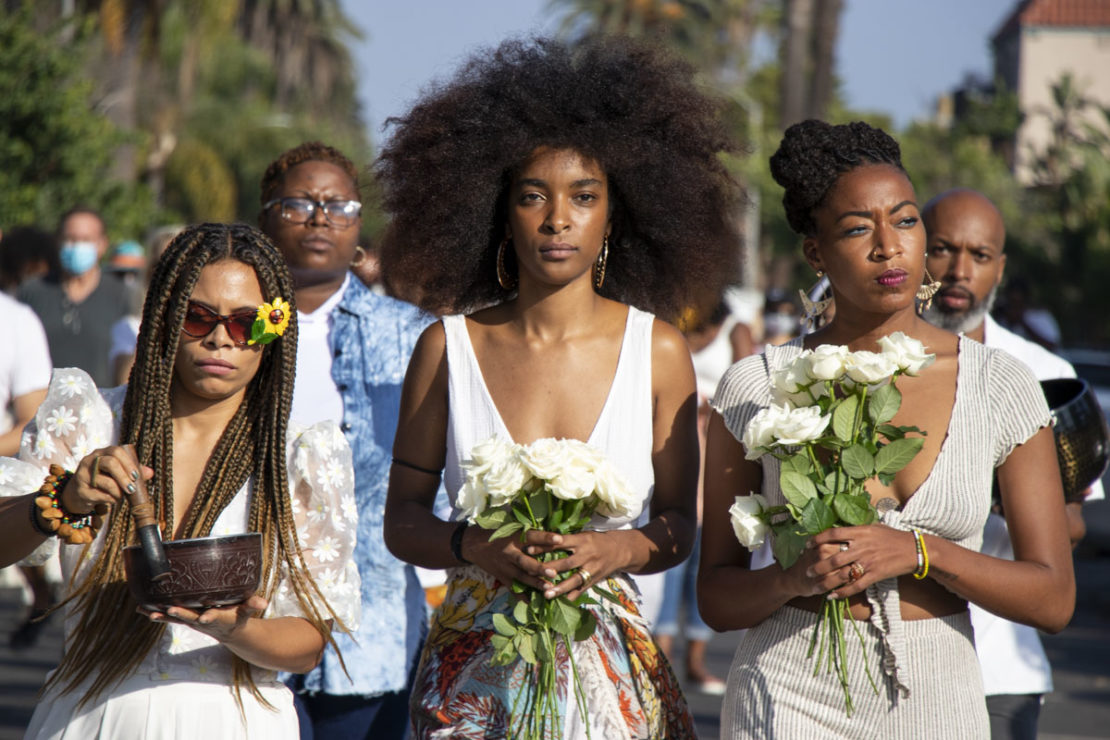 A group of women lead a short march around Bixby Park as part of a healing-centered sit-in protest in solidarity with the Black Lives Matter movement based at the neighboring Bluff Park on Sunday, Sept. 27, 2020. Photo by Crystal Niebla.

This past weekend a group of about 100 participants, in solidarity with the Black Lives Matter movement, hosted a healing sit-in at Bluff Park as an alternate form of protest.

Organizers of the event wanted those in attendance to honor the lives of those lost to police brutality.

“A lot of us found that it was exhausting,” said 28-year-old Derek Garlington, a videographer helping to film the event.

He wanted to participate in “taking that anguish, instead of charging it” and turning it into healing for Black and Brown people who have experienced generations of trauma, giving thanks to the protesting work done before them.

“We needed an alternative way to be in solidarity,” he said.

Crystal Niebla contributed to this report.