After months of fundraising to replace the burned-down equipment at Admiral Kidd Park in West Long Beach, the playground is one step closer to reopening, but the finished product could still be months away.

A fire, the cause of which is still undetermined, burned down the playground in July, and, since September, the nonprofit Partners of Parks has been fundraising to buy a new set of equipment.

The fundraiser fell short of its original $1 million goal, but after raising more than $450,000, Partners of Parks was able to secure a discount of $24,000 and order the new equipment this month from Landscape Structures, Inc. The discounted price was about $400,000, according to the Press-Telegram, which first reported the purchase.

Partners of Parks said much of the money came from large donors, including the Earl B. and Loraine H. Miller Foundation, the Marathon Petroleum Foundation with $250,000, Amazon with a $150,000 gift, and “significant contributions” from The New L. Family Fund and Junior League of Long Beach.

Although the equipment is on its way, it’s not clear when it will arrive and be installed, according to the city of Long Beach. 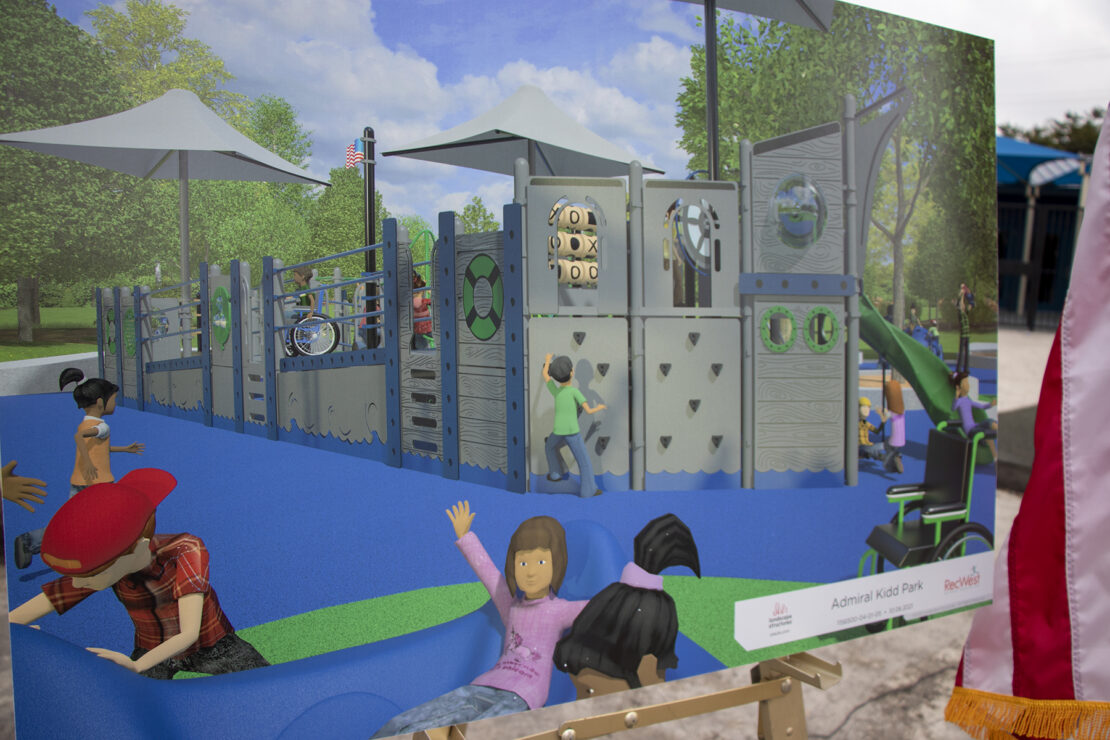 A rendering of what the new Admiral Kidd Park playground is expected to look like displayed at a press conference on Thursday, Oct. 7, 2021. Photo by Crystal Niebla.

“The order was recently placed and Public Works is in the process of creating a schedule, but are waiting on estimated shipping information from the supplier,” Nancy Villaseño, the city’s park planning and partnerships manager, said in an email.

In a previous interview with the Post, Partners of Parks executive director Trinka Rowsell said it will take six months to build the playground after the equipment is ordered.

Purchasing the equipment also isn’t the only cost of the project, with an estimated total price tag of up to $1 million to cover additional expenses like installation, permitting, storage and resurfacing.

In March, the city allocated unused funds from its Measure A sales tax, which is intended to cover infrastructure projects, to backfill any of the $1 million that isn’t paid for through fundraising.

“Partners of Parks has done an outstanding job raising funds to restore the playground,” Councilmember Roberto Uranga, whose district includes the park, said in a statement. “I’m also pleased that the Council was able to approve Fiscal Year 2021 Measure A surplus budget funds as we are all eager to rebuild.”

Replacing the playground wasn’t covered by insurance because the city’s deductible was higher than the cost of the project, officials previously said.

The playground is expected to maintain the same nautical theme as the equipment that burned down and feature new inclusive equipment meant to accommodate kids with disabilities or special needs.