After a night of chaos, residents and city workers—roughly 1,000 people—were out early Monday to begin the process of cleaning up after looters wreaked havoc on a city already reeling from a health pandemic.

Dozens of public works officials wearing face coverings were out in force, power-washing streets and painting over graffiti that covered walls and windows of dozens of Downtown businesses.

Shattered glass covered sidewalks, windows were smashed, doors were left ajar, plywood was torn down and members of the National Guard stood in camouflage uniforms holding machine guns on corners as local police and roamed the streets and news helicopters circled above. 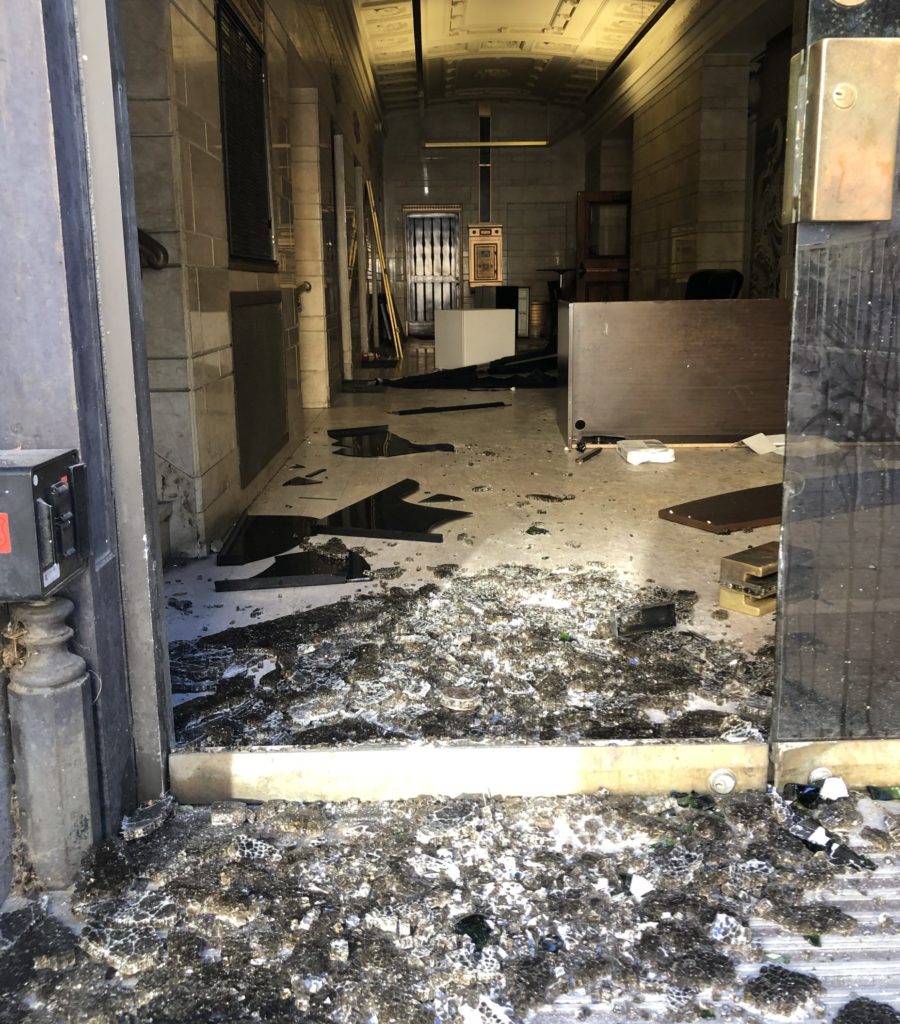 Shattered glass covered the inside of the securities building at 110 Pine Avenue Monday morning, June 1, 2020.

As many as 3,000 people took to the streets Sunday—the majority of them peaceful—in a show of protest against the killing of George Floyd, who was was killed while being arrested by a white Minneapolis police officer.

But the afternoon turned violent and chaotic Sunday evening as looters ravaged stores in the Pike Outlets, along The Promenade and Pine Avenue, on Long Beach Boulevard and elsewhere.

Rob Payne said he watched the turmoil unfold from his apartment on The Promenade where he witnessed a stabbing and someone running off with a USPS mailbox of all things.

“I couldn’t stop the damage and destruction last night, so I’ll clean it up,” he said as he scrubbed graffiti from a fence. 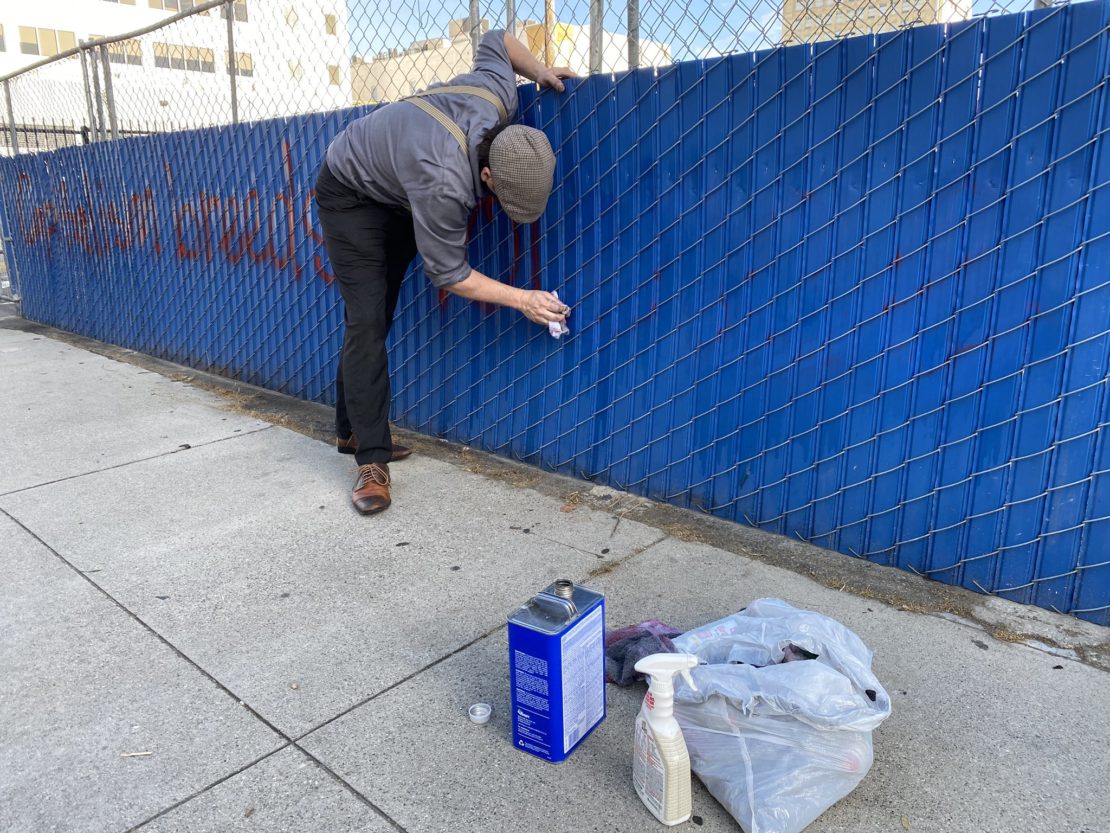 Payne said the protests matter, and the demonstrators had an important message. He’s just frustrated that vandalism and looting followed them.

The Men’s Suit Outlet at 7th Street and Pine Avenue was completely gutted by fire shortly after midnight. Several engines and arson investigators were called to the scene, and fire officials surrounded the business Monday morning. 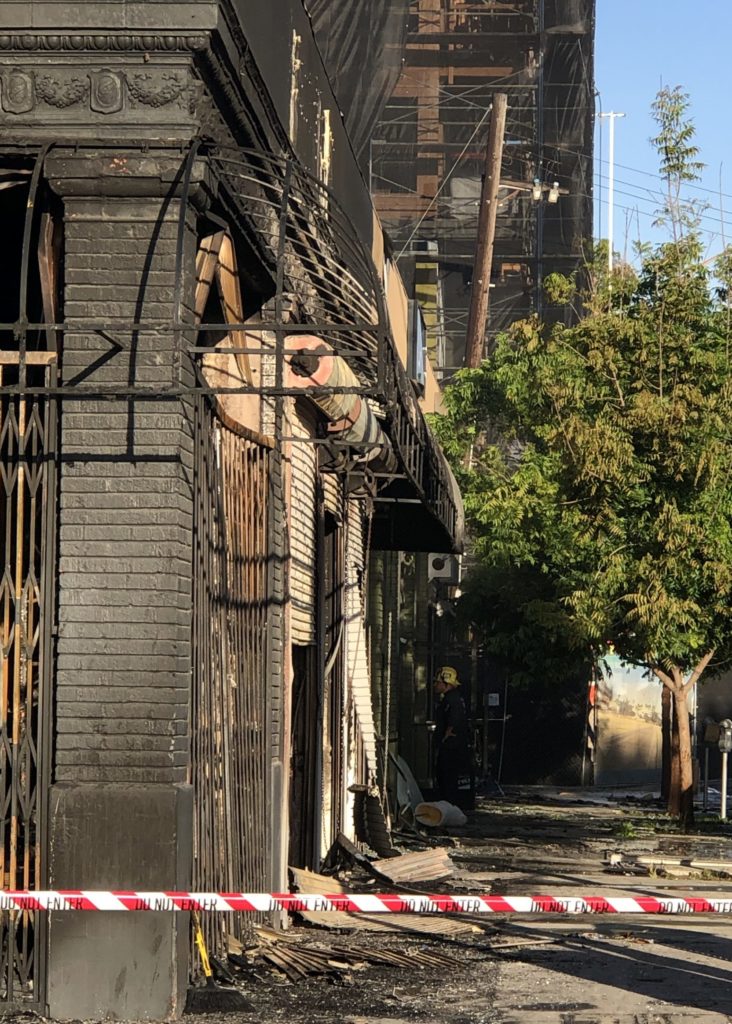 The Men’s Suit Outlet at 7th Street and Pine Avenue as gutted by fire shortly after midnight on Monday, June 1, 2020.

All around, people were out taking pictures and holding plastic bags, offering to help clean up. Volunteers filed into Harvey Milk Park early Monday with brooms, gloves and a box of granola bars, with the Downtown Long Beach Alliance helping coordinate the effort.

In the surrounding streets, residents had already begun before 7 a.m. Beverly Zaluk was one of the first people to arrive on Pine Avenue, trash bag in hand, just after sunrise. A Downtown resident, Zaluk said she saw the protests, and the rioting, from her balcony.

“I took the day off because I knew these businesses were going to need help cleaning,” she said.

“As much adrenaline as we [felt] last night, people exist like that every day,” she said of the tension between black communities and the police. “If you didn’t hear them before, you better hear them now.”

Mayor Robert Garcia said in a tweet that the city is coming together to help clean up. “The loss to small businesses affected is devastating and I promise we will work to rebuild every single one of them.”

Police, public works crews, and the National Guard are working to prepare and fortify our business districts.

The loss to the small businesses affected is devastating and I promise we will work to rebuild every single one of them.

Other cleanups were planned during the day in Downtown and at Houghton Park in North Long Beach.

Most of the places hit by looters in North Long Beach were drug stores and markets—places where people could get essential, basic needs items.

Crews were coordinating cleanup efforts, but Councilman Rex Richardson said he wouldn’t be surprised if people were up early already cleaning.