After a deal to keep the Los Angeles Angels in Anaheim fell apart this week amid accusations of political bribes and a “cabal” that was run by unelected business interests, Long Beach said it’s ready to talk again if the Angels are.

The fallout in Anaheim, prompted by a federal corruption investigation, raised reasonable suspicions that Long Beach could stand to benefit from Anaheim’s fumbling of the stadium negotiations. In early 2019, Long Beach had initial conversations with the Angels about the prospect of relocating the team to the large undeveloped parcel near the Long Beach Convention Center known as the “Elephant Lot.”

“If the Angels are interested in continuing those initial discussions, Long Beach would reengage in those discussions and seek direction from the City Council,” Long Beach said in a statement Wednesday.

Long Beach has tried for some time to activate the 13-acre Elephant Lot, which is one of the biggest undeveloped parcels of land along the California coast. It recently updated language in the Acura Grand Prix of Long Beach to include a clause that the city can seek out the development of the land, which could again include a baseball stadium. 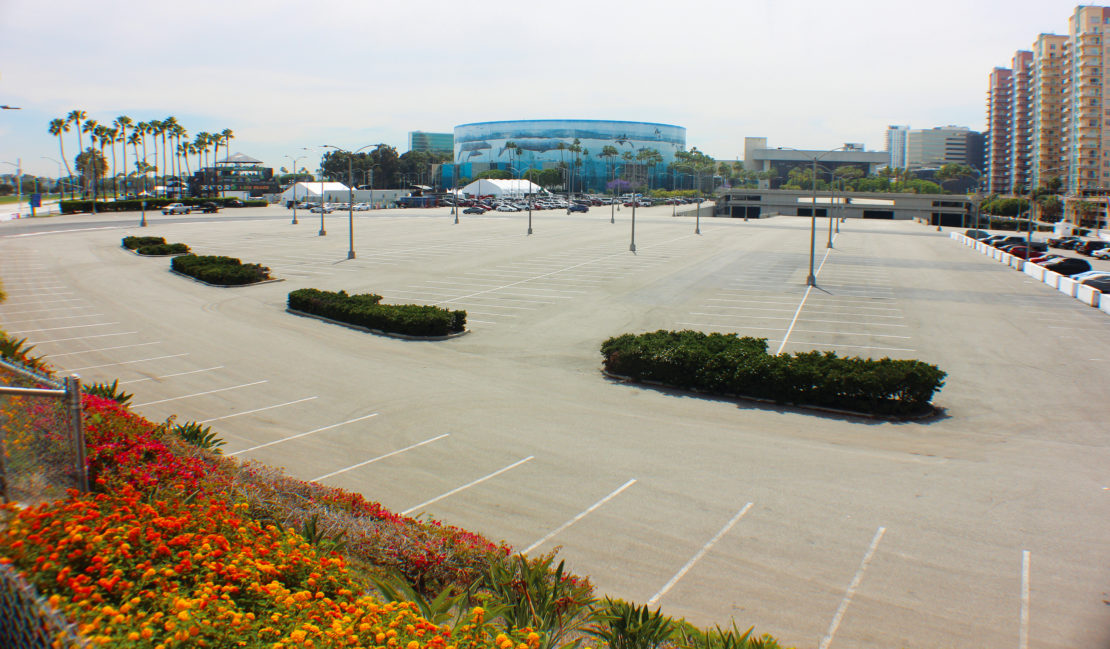 The so called “Elephant Lot” at the Long Beach Convention & Entertainment Center. Photo by Brandon Richardson.

The statement from Long Beach noted that no other discussions have taken place between Long Beach and the team since December 2019 when the Angels and Anaheim struck a negotiating deal to move forward with a plan to develop a much larger project on the 155-acre site surrounding the existing stadium in Anaheim.

But that plan has since fallen apart with the City Council voting unanimously Tuesday night to halt the $320 million deal to sell the stadium and the surrounding land to Angels owner Arte Moreno who had planned to develop the land into housing, restaurants, park space and other amenities.

Marie Garvey, a spokesperson for the Angels, told the Los Angeles Times that the team was disappointed in Anaheim’s vote and that the team is “currently exploring all of our options.” Garvey did not immediately respond to questions about if those options will include reviving talks with Long Beach.

Tuesday’s vote followed a turbulent week in Anaheim politics after an FBI affidavit alleged that Anaheim Mayor Harry Sidhu had given the team advantageous information during negotiations in hopes of securing $1 million in campaign contributions for his upcoming reelection.

The filing also implicated Melahat Rafiei, a well-connected political consultant with ties to Orange County and Long Beach, as a cooperating witness in the probe who recorded meetings for the FBI.

Rafiei, who was also accused in court documents of trying to bribe Irvine council members to enact favorable cannabis laws, resigned her posts as the California State Democratic Party secretary and as a member of the Democratic National Committee Sunday. Sidhu resigned as mayor Monday.

Long Beach’s statement Wednesday appears to be among the first communications by the city regarding any revival of discussions with the Angels. Multiple City Council members said they had not heard about any preliminary discussions about renewed talks when contacted Wednesday.

Jeremy Harris, President of the Long Beach Area Chamber of Commerce, said that, just like 2019, if the city were to negotiate for the team to relocate to Long Beach, the Chamber would back it.

Developing the lot has been a priority for the Chamber as it tries to attract businesses to Long Beach and improve conditions for those trying to recover from the pandemic.

“A vacant parking lot certainly doesn’t help with that,” Harris said. “A hotel, baseball stadium or some other use would lend to that.”

An existing lease requires the Angels to stay in Anaheim through 2029 with an option to extend the lease through 2038. Long Beach has already committed the Elephant Lot as a venue for the Summer Olympic Games in 2028.

City efforts to assess the seismic resilience of the land—it’s made of infill—and how the water table below it could limit what might be built on top of it have not been completed. A public outreach campaign to gauge public opinion about what should be built was delayed because of the pandemic, according to city officials.

Team and city officials had worked on Anaheim the deal since 2019 and appeared to be on the verge of formalizing it before state housing officials stepped in to block it, stating that it had violated the Surplus Land Act that requires publicly owned land to be offered to affordable housing developers first.

The Elephant Lot could provide a unique opportunity because it’s publicly owned land that sits inside the Tidelands area, where housing has not been interpreted to be an allowable use.

Tidelands areas are governed by a public trust doctrine that has historically blocked residential housing in favor of developments like restaurants, hotels, convention centers and stadiums because they are public uses.

Squeezing a stadium into the 13-acre space and finding a way to circulate tens of thousands of fans into a Downtown area that lacks access to freeways could still prove to be a challenge. But it’s a challenge that Long Beach seems willing to try and figure out, if the Angels want to talk about it, again.