The Aquarium of the Pacific has long been a leader in shark conservation efforts, a legacy that is continuing with veterinarian Dr. Lance Adams’ newly published paper on the artificial insemination of zebra sharks.

Adams, who has cared for the Aquarium of the Pacific’s thousands of species for over 20 years, was the lead author of the paper published in the journal “Frontier in Marine Science.” The study found that artificial insemination can be a safe and effective method for breeding zebra sharks, which are listed as endangered by the International Union for Conservation of Nature’s Red List of Threatened Species.

“At aquariums, managing self-sustainable populations of sharks that are genetically diverse can be challenging,” Adams said in a statement, “and shipping a sperm sample from one aquarium to another for artificial insemination is much safer, less stressful and less expensive than transporting a large shark.”

The Aquarium of the Pacific is believed to be the first facility to perform a successful shark artificial insemination in the United States, which took place in 2009 under Adams.

Titled “Artificial Insemination and Parthenogenesis in the Zebra Shark Stegostoma tigrinum,” the paper describes a study of artificial insemination of zebra sharks as a method to reproduce the species in captivity. The study was the brainchild of Adams and involved four sharks—one male and three females. 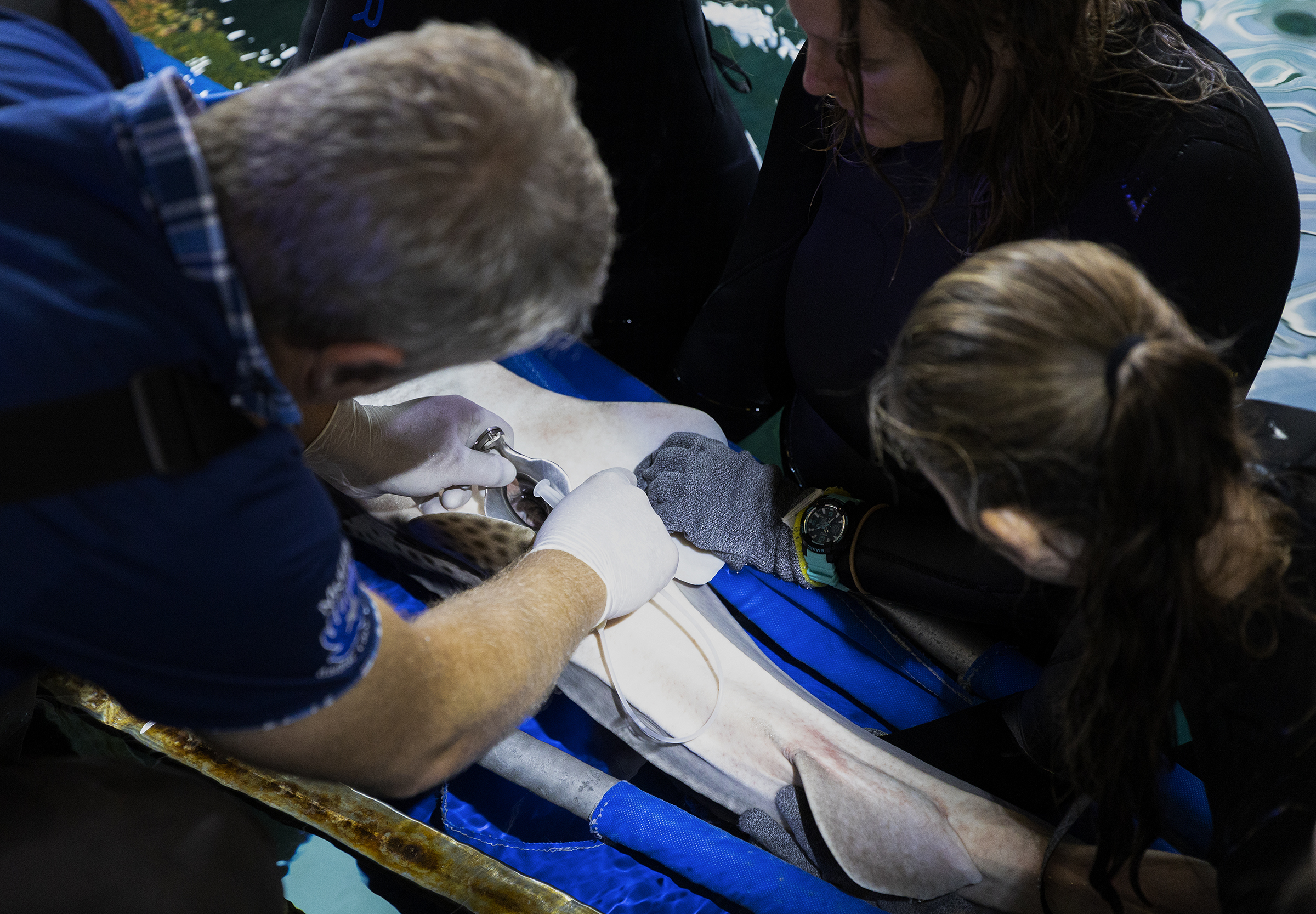 Aquarium of the Pacific staff veterinarian Lance Adams injects semen into Gatsby, one of the facility’s zebra sharks, Thursday, May 12, 2022. Photo by Brandon Richardson.

After two medical procedures, however, the Aquarium of the Pacific became the first to successfully reproduce a zebra shark via artificial insemination. Fern, one of the aquarium’s female zebra sharks, laid fertile eggs that hatched in 2014.

Two sharks were born in 2014, marking the first successful reproduction of a large shark species. Zebra sharks can grow to between 5.5 feet and 11.5 feet long, according to the aquarium’s website.

One of the two offspring, a female named Gatsby, still lives in the Aquarium of the Pacific’s Tropical Reef Habitat. Gatsby recently underwent her own round of artificial insemination.

The other shark was transferred to another Association of Zoos and Aquariums institute as part of the Species Survival Plan for zebra sharks, according to the Aquarium of the Pacific announcement.

All veterinary procedures conducted at the Aquarium of the Pacific, including shark artificial insemination, are done in accordance with the organization’s animal welfare policy to “ensure the health, safety, wellbeing and humane treatment of animals,” the announcement stated.

The artificial insemination process is relatively straightforward and fast—Gatsby’s procedure for example took about 10 minutes from capture to release. Aquarists first lure the sharks into a stretcher with a piece of fish. The shark is then rolled so it is belly up, putting it in a relaxed state of immobility.

Adams then performs an ultrasound to ensure eggs are present in the shark’s oviducts before inserting a speculum into the shark’s cloaca and depositing the semen sample using a catheter. The shark is then rolled upright and released.

Now that the paper is published, scientists around the world can replicate Adams’ methods and produce additional data about shark artificial insemination, which could prove vital to the conservation of species in the future.

“I hope that shark populations recover and that this work will not be needed to save a shark species from extinction but, if it is, I will be grateful to have contributed,” Adams said in an email to the Post Tuesday. “It is a gratifying feeling to be able to document this accomplishment for the aquarium and show the results of our dedication to progressing the field of aquatic animal care.”

Editor’s note: This story has been updated with additional comment from Adams.