Three federal contractors are managing and operating the temporary migrant center at the Long Beach Convention Center, but the exact scope of their work and how they are overseen remains unknown as the government declined to release many basic details about their pay and duties.

In fact, officials with the federal Department of Health and Human Services refused to discuss most details of the contractors’ work or even release copies of their contracts, which are traditionally considered public documents, even though at least one of the contractors has faced sharp criticism for work at another facility for unaccompanied migrant children.

The lack of transparency over contractor operations at the migrant center concerned Rep. Alan Lowenthal, D-Long Beach, who has twice visited the facility. Though Lowenthal said he was “impressed” by the conditions at the facility, he would have preferred different contractors.

“I think it would have been much better if HHS had contracted more with our local community,” Lowenthal said.

Lowenthal also called on HHS for greater openness on its operations, including lifting the prohibition on media visiting the facility. HHS has prohibited reporters from entering migrant holding centers, but recently made an exception at the Convention Center for Fox News.

It wasn’t clear why Fox News gained access; HHS spokesman Zhan Caplan said in an email only that “the White House requested it” as HHS Secretary Xavier Becerra was touring the facility earlier this month.

“I understand HHS’s concerns about the children’s privacy, but I think there is a way that visits by the local press and community leaders could be done that would both protect the children and increase public transparency,” Lowenthal said.

The 1,000-bed migrant center opened on April 22 for girls under 17 and boys under 12. It’s scheduled to close by Aug. 2. It’s one of several similar facilities in the U.S., set up to house unaccompanied migrant children until officials can reunify them with their families or place them in temporary homes. 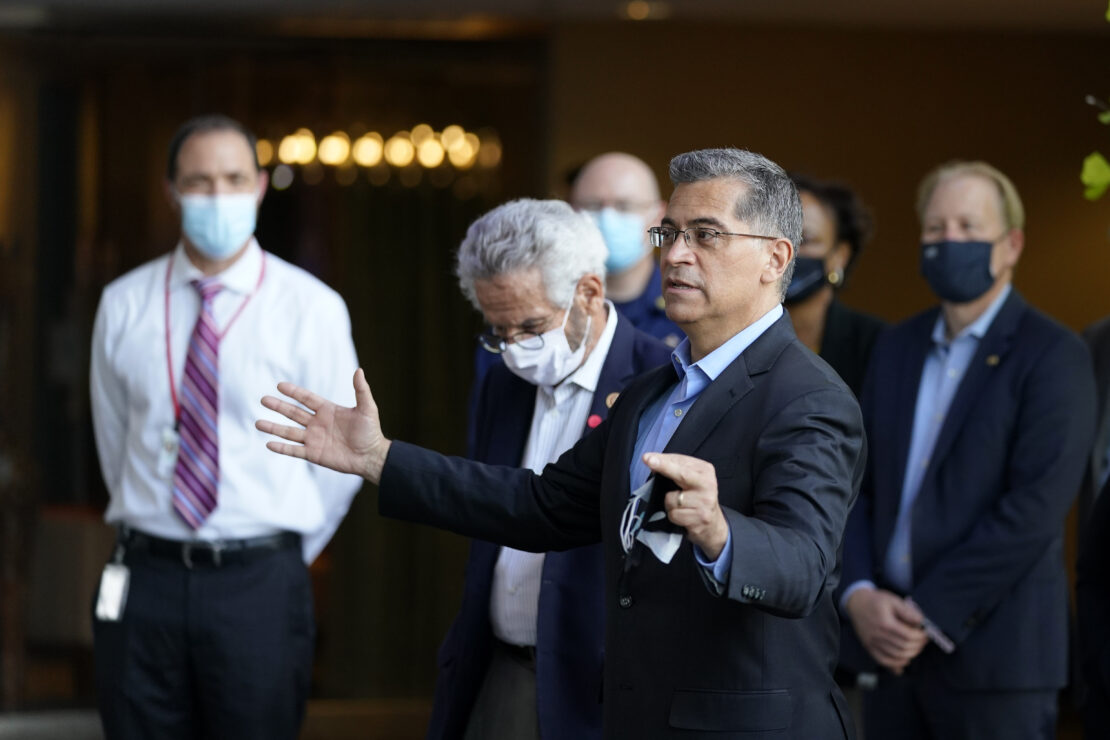 According to the city’s updates on the facility, as of May 24 there are 225 children at the center, with six of them testing positive for COVID-19. A total of 534 have so far been reunified with a family member or sponsor in the U.S.

According to the city of Long Beach’s contract with HHS, the federal government pays the city $197,356 per day for use of the Convention Center. In turn, HHS contracted with three firms to run the migrant facility. They are Caliburn, DRC and UCLA Health. The city contract also stipulates that the migrant center is an official federal facility, meaning that the federal government has control over what happens there, including the investigation of any crimes that might take place.

Though that contract states that city officials have access to the facility and to HHS’s operational, management and communications plans, city spokeswoman Jennifer Rice Epstein referred a request to view HHS’s agreements with contractors to HHS spokesman Caplan.

Officials at Caliburn, DRC and UCLA Health referred all inquiries to Caplan. He denied a request to view the contracts with all three firms, and would only provide a few details about the work the companies are doing at the Convention Center.

“Overall we have almost 600 contractors on site during the day and 300 on at night,” Caplan said. He refused to say how much the federal government is paying the three companies that have responsibility for the center’s operations.

According to Caplan, Caliburn employs youth care workers, behavioral health specialists and case managers “who support unification efforts.” Caplan offered no other information, though hiring notices posted online show Caliburn is still looking to fill a wide range of posts at the migrant center. Many of the notices list the Convention Center’s address as the company location.

“The Youth Care Worker is responsible for all direct care to minors at a temporary youth’s residential facility,” states one job posting. “They always provide a continuous line of sight supervision to their assigned children. They ensure the safety and quality care of all children, contractual requirements, and client’s expectations are met.”

Caliburn also figures prominently in a scathing 2019 Amnesty International report on the temporary influx detention center for undocumented minors in Homestead, Florida, which the company was running at the time.

In addition to finding that children were being held at the center for prolonged periods of time—even hundreds of days—Amnesty International also found evidence that children were subject to a “highly restrictive setting” where they had to wear bar codes and couldn’t communicate their needs because of “insufficient language services.” The Amnesty International report also found that the facility offered “potentially inadequate educational services” as well as “inadequate reporting” of allegations of sexual abuse, at least two of which allegedly involved staff members.

In his official response to the allegations, which is included in the Amnesty International report, Caliburn International CEO Jim Van Dusen denied any allegations of mistreatment or poor care, saying that the children at Homestead were receiving “excellent care,” which included classroom instruction, playtime and “three nutritious meals every day, plus snacks.” HHS closed the Homestead facility in 2019 at the height of the controversy, but insisted it was to “ensure fiscal prudence.”

As for the other contractors, Caplan said that DRC is the “primary contractor” and is responsible for the shelter’s “overall operation.” Through specializing in disaster response and management, DRC has been operating temporary housing contracts around the world since 1991.

“The UCLA Health system is honored to play a role in providing state-of-the-art, pediatric age-appropriate care to the children coming in on the border mission,” UCLA Health President Johnese Spisso said in a May 3 news release. “For us, it’s a chance to really extend our care to this highly vulnerable population and support them in many ways, both for their health care needs and their psychosocial development.”