One week ago, Gov. Gavin Newsom, signed AB 2097 into law, removing minimum parking requirements for new housing developments and businesses near transit hubs like the Metro A Line (formerly the Blue Line).

The legislation will remove a significant hurdle in creating urban housing, and seeks to decrease the need for cars in traffic-dense cities like Long Beach.

The law, which takes effect in January, gives developers the ability to choose their own parking arrangements in Downtown and Central Long Beach areas. Parts of West, North and Southeast Long Beach along main transit corridors will also be affected by the law, though the city’s department of Development Services says the impact to any specific area will be limited because they anticipate that most will still opt to provide at least some parking in their buildings. 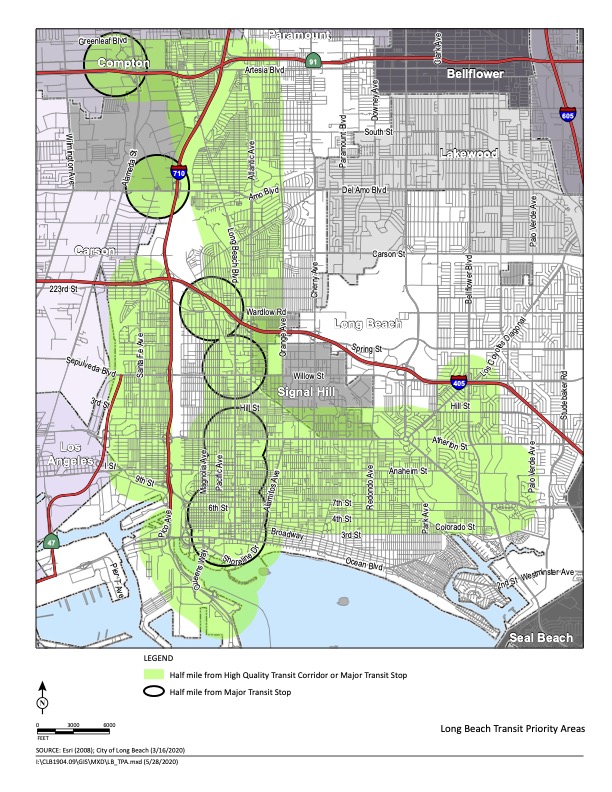 It will also make housing cheaper and easier to build in areas with easy access to daily destinations like jobs, grocery stores and schools, which would make a city more walkable and less car-dependent, advocates say. The city estimates that building parking structures for mid- and high-rise buildings can cost $50,000 or more per space, but the exact cost can vary.

Residents, however, may not be thrilled with lower parking requirements for developers. Studies have shown Alamitos Beach is already extremely parking impacted, and though there is parking Downtown, much of it you have to pay for.

While it may seem like AB 2097 will make the issue worse, Development Services spokesperson Chelsey Magallon said its purpose is to create a safe and inviting pedestrian, cycling and transit environment.

The city plans to maximize public and private parking that already exists in the city by “making public parking and beach parking lots available to residents at night, adjusting red curbs to maximize street parking, adding diagonal parking where possible and exploring public-private partnerships to maximize the use of existing parking lots,” she said.

Magallon said countywide studies show that approximately 14% of urban areas are used for parking. Max Dubler, communications manager for the advocacy group Abundant Housing LA, told the Post that concrete manufacturing is responsible for about 8% of total carbon emissions and much of that concrete is used for buildings with up to 50% of that being used for parking alone.

By removing parking requirements, the law aims to not only tackle the housing crisis but climate change as well. While the city has advocated for these issues in the past, they said they generally oppose changes in state or federal law that reduce local control.

The city has observed an increase in the amount of affordable housing near transit areas since implementing its Enhanced Density Bonus Ordinance last year. The ordinance gave developers more incentives to build moderate-, low- and very-low-income housing by reducing parking mandates.

Not enough time, however, has passed to evaluate the effectiveness of it.

“It is anticipated that AB 2097 will have a positive but subdued impact on the housing production in the City of Long Beach,” Magallon said.

“It is also possible that the impact of higher interest rates and other macroeconomic factors may, at least in the short- and medium-term, negatively offset any positive impacts from AB 2097,” Magallon said. She assured that the city will continue to pursue the most effective tools in creating affordable housing to align with its Housing Element, the city’s plan for building new housing.

In the past, the city has supported the implementation of affordable housing and will continue to do so through the Long Beach Community Investment Company, the body that oversees and administrates its affordable housing funds. The increased flexibility provided by AB 2097 “may be especially useful for specific projects such as those for people experiencing homelessness or older adults where residents are less likely to have cars,” said Magallon.

Not only will the new law benefit new developments in the city but the department anticipates it will be uniquely helpful in allowing business owners to fill vacant storefronts without the need to provide additional parking or comply with complex regulatory requirements. “In the coming months, the Department will be working with stakeholders to implement this change and assure that applicants and building owners are aware of this new opportunity,” said Magallon.