In response to the state housing crisis and a new California law that seeks to spur affordable housing development, the Long Beach City Council on Tuesday will consider allowing more density and less parking for some apartment buildings, mostly in the Downtown and Central Long Beach areas.

The city’s Department of Developmental Services is proposing offering developers more incentives to build moderate-, low- and very-low-income housing, particularly along transit corridors and near job centers. In exchange, developers would be eligible to receive rewards depending on where the units are built, how many affordable units are included, and how low the rents will be for each unit.

The rewards include more density per lot than is currently allowed, reduced parking mandates, taller buildings and fewer requirements for open space, according to a city staff report.

The new rule applies exclusively to multi-unit buildings that are already zoned for five or more units; it excludes areas zoned for single-family housing, where multiple units per lot cannot be built. 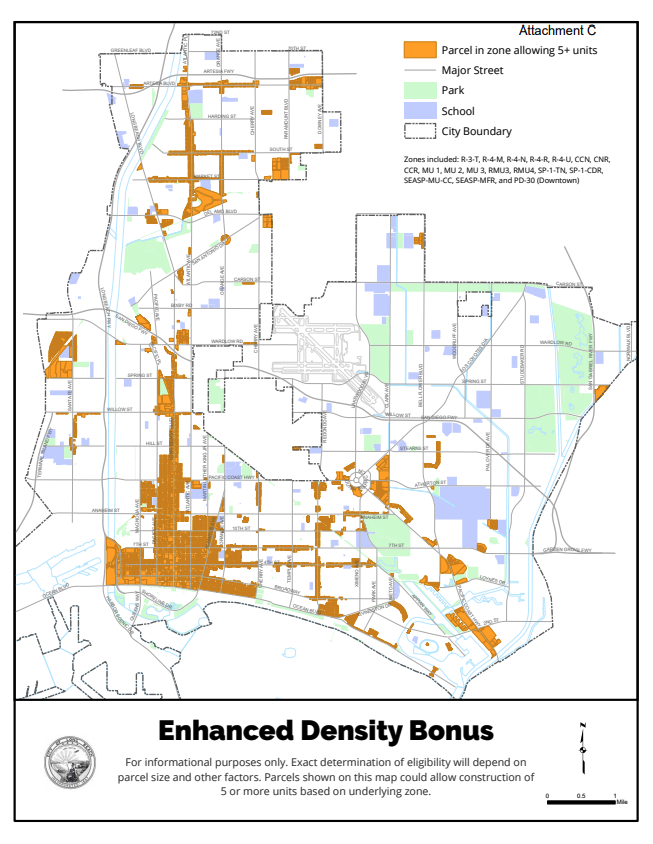 A screenshot of a map of the areas (parcels) eligible for the construction of five or more units under a proposed enhanced density bonus ordinance.

Aside from the high concentration of eligible space in Downtown and Central Long Beach, parts of West, North and Southeast Long Beach along main corridors would be affected by the change.

The policy update, according to the staff report, would expand an existing program that offers various bonuses to developers if they include rent-reduced units that are “deed restricted,” meaning it must remain low-income for at least 55 years.

According to the staff report, developers can earn bonuses in three areas: high-quality transit corridors, major transit stops and base area.

Examples of bonuses include a maximum two-story increase in the Base Area, and three stories in the Transit Priority Areas, according to the staff report.

Some parts of the new ordinance in Long Beach are even more generous to developers than what’s required under a new state law that went into effect in January.

For example, developers who construct a reduced-rent two-bedroom unit would be required to offer one parking space, while the state law requires 1.5 spaces, according to the staff report. However, the proposed city ordinance also requires an additional guest parking ratio at one space per eight units, while the 1.5-space state ratio includes guest parking.

Similar to the state law, the city ordinance would eliminate parking requirements altogether for 100% affordable projects regardless of location.

The public will have the option to submit a written comment via eComment or by emailing the city clerk at [email protected] The council meeting will take place at 5 p.m. at Long Beach City Hall, located at 411 W. Ocean Blvd. Anyone can also tune in virtually via a live stream of the meeting at www.longbeach.gov/lbtv

For more information about the proposed EDB, read the full staff report here.