Authorities said a crowd of roughly 3,000 people descended upon Long Beach Sunday afternoon to march in protest of police brutality and the death of George Floyd at the hands of a Minneapolis police officer.

While the vast majority of the protesters were peaceful, by sunset, police were firing rubber bullets trying to disperse protestors on Pine Avenue as looters swarmed businesses and tagged graffiti throughout the Downtown area.

By 9 p.m., the National Guard and other law enforcement agencies responded to help Long Beach quell the looting and vandalism.

Long Beach Police Chief Robert Luna in a news conference Monday said he had originally staffed roughly 350 additional officers for Sunday, expecting a turnout of only a few hundred protesters. But as the crowd swelled into the thousands, the department called for more officers from its own ranks and from outside police agencies, including the Los Angeles County Sheriff’s Department.

In response to some business owners who questioned whether Long Beach police were prepared for the violence, Luna defended his department’s efforts.

“I’m not gonna stand here and make any excuses,” he said. “I don’t mind being scrutinized, but if there’s anger to be directed, it is about the individuals who came here [to cause violence]. That’s where our anger needs to be directed.”

Luna said officers were working to put out “hot spots” throughout the city while dealing with a mass surge in calls for service, which jumped from an average of 1,726 calls per day, to 4,686 calls late Sunday and early Monday.

Long Beach Fire Chief Xavier Espino said firefighters worked to put out roughly 100 car and structure fires in the city but noted only one major structure at a men’s suit outlet at the corner of Pine Avenue and 7th Street. 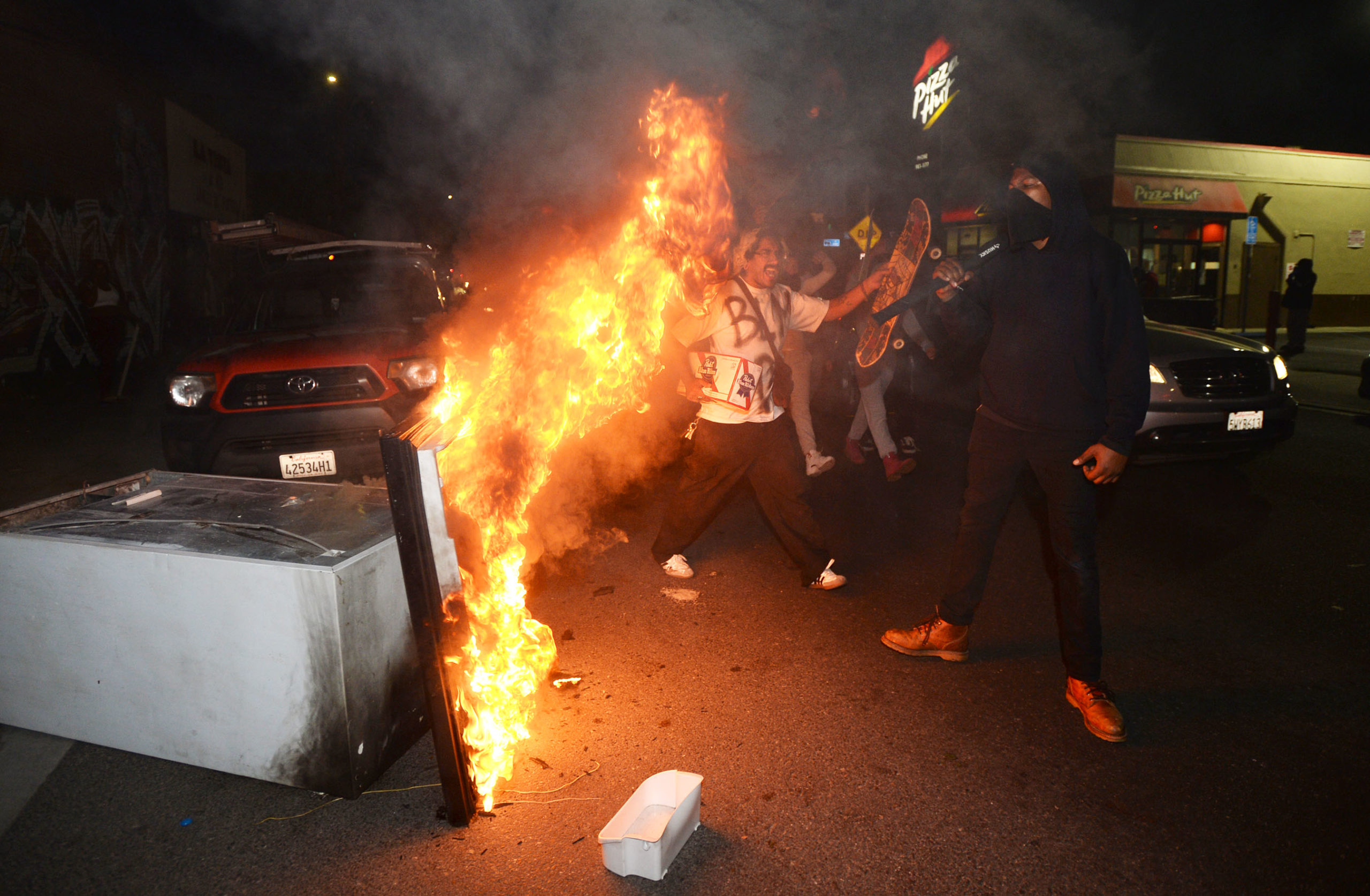 Mayor Robert Garcia said it was remarkable that nobody was killed and no first responders were injured. Some demonstrators, however, were injured in the chaos, and KPCC veteran reporter Adolfo Guzman-Lopez was hit in the neck with a police rubber bullet as he had just finished interviewing a protester.

Garcia said he has spoken with Guzman-Lopez and that the city is investigating the incident.

In response to questions as to why officers weren’t immediately arresting looters on Sunday, Garcia said officers had a strategy to keep the public safe and that the idea that they weren’t protecting the stores was a “false narrative.”

In all, he said, the department did a “fantastic job” of standing firm and not overreacting.

“I want to be very, very clear that the Police Department acted heroically, that we should be proud of the work they did and they are working their asses off,” Garcia said. “So this idea that they were just standing around is just complete B.S.”

Luna said he has deployed hundreds of officers on Monday in preparation for more possible violence as Long Beach has set citywide curfew of 4 p.m. (1 p.m. for business districts).

Police are expected to later release more details on those who were arrested. Luna said more arrests could come.

“There were a whole lot of cameras out there,” he said. “And if you were looting we have your license plate number and we have your face. We’re coming after you and we’re going to arrest you.”

Despite Sunday night’s events, the mayor said he was encouraged by the hundreds of people out on Monday helping in mass cleanups.

“To see our residents, many with tears in their eyes, and with brooms and sweeping and cleaning, I was just awestruck by their resilience and commitment to our city,” he said. “Thank you. You make us proud and you are what Long Beach is all about.”