Sam Kasfy was surrounded by hundreds of trampled shoe boxes in his clothing store at the corner of 4th Street and The Promenade Monday.

Looters had shattered the windows a day earlier as they swept through Long Beach following a massive protest against police brutality.

“I tried to stop them. Nobody would listen,” said Kasfy, who has owned the Jean Machine store for 18 years.

Kasfy had spent about $4,000 to board up his windows, but when the time arrived, all he could do was watch as a large group of people wreaked havoc inside. Thousands of others saw the destruction live on TV.

“They probably took a right shoe, a left shoe,” Kasfy said of the thieves. “They don’t even know what they took.”

He called the police, but after an hour of waiting and watching, Kasfy gave up hope.

“I thought maybe someone would come,” he said, “but nobody came.”

The owner of the Auld Dubliner—where thieves kicked in the door and stole food and alcohol from the pub—put it more succinctly: “I’d give the city an F on this performance,” said proprietor David Copley.

After TV footage showed officers appearing to stand down as looters raided the Pike Outlets and stores on Pine Avenue, Copley and others started to believe officers had been told not to confront looters.

“It’s really hard to wrap my head around that,” Copley said. “Perhaps it saved lives, including potentially officers, but from a basic citizen standpoint, it is hard to accept wanton destruction simply being observed.”

On Monday, city officials pushed back against that perception as business owners began cleaning up their ransacked stores and videos of the havoc replayed on the news. Even Long Beach police officers privately groused about the widespread damage and the hit to their department’s reputation. 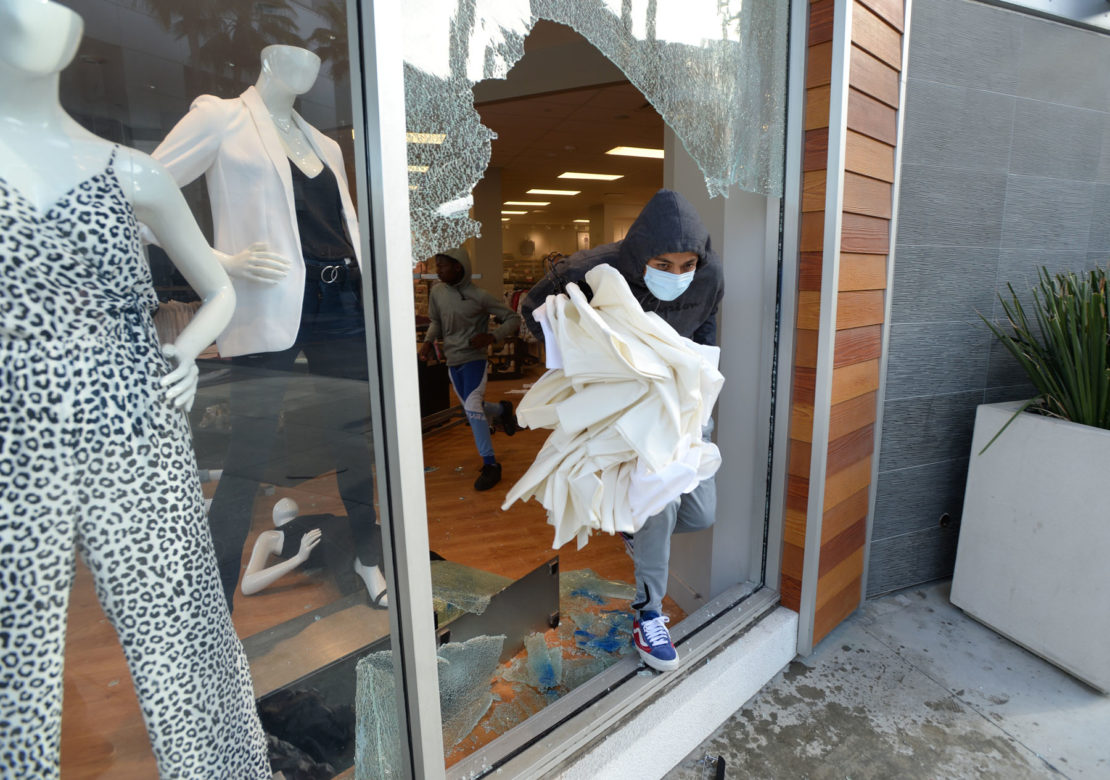 A looter at Express Factory Outlet at The Pike Outlets. Sunday, May 31, 2020. Photo by Stephen Carr.

“Let’s be honest,” Luna said in a morning briefing. “There were media cameras roaming around and they were looking for looting that was happening. And they were getting there much earlier than the police were. But eventually we’re going to get there.”

Officers were busy responding to almost triple the usual number of calls that day, Luna said.

Police across the country have struggled to contain violent outbursts in recent days, often in the wake of protests sparked by the death of George Floyd, a black man who was suffocated under the knee of a white Minneapolis police officer.

But the focus on police performance during the demonstrations shifted to Long Beach in large part because TV audiences had a front-row seat to the dramatic images of officers and looters, side-by-side, that was unfolding on the streets.

One particular video drew repeated questions from observers nationwide. The clip shows thieves busting their way out of a boarded-up store on Pine Avenue. They run off with armloads of clothes as officers watch from a few dozen feet away. Another video shows looters bolting past a cluster of officers in riot gear, who are unable to grab a single one of them.

What happened during those crucial hours has raised questions about the department’s initial strategic assumptions, which began with a significant miscalculation on the number of protesters who would converge on Long Beach for Sunday afternoon’s march.

And by the time the realities set in, the city was at a disadvantage in getting help quickly from neighboring police agencies under a mutual aid agreement. Those agencies were also stretched thin and were hemmed in by the numerous demonstrations throughout the region.

Even then, as Long Beach requested help, it hadn’t yet brought the full force of its own department to bear. It wasn’t until early Monday morning that the LBPD issued its highest-level tactical alert, canceling all vacations and days off for its officers—a move the Los Angeles Police Department had already taken. Now, all Long Beach officers are working in staggered 12-hour shifts in case the unrest continues.

By Monday, National Guard troops were also walking Downtown streets in advance of a city-instituted curfew banning people from business districts at 1 p.m. and instructing everyone to be home by 4 p.m. 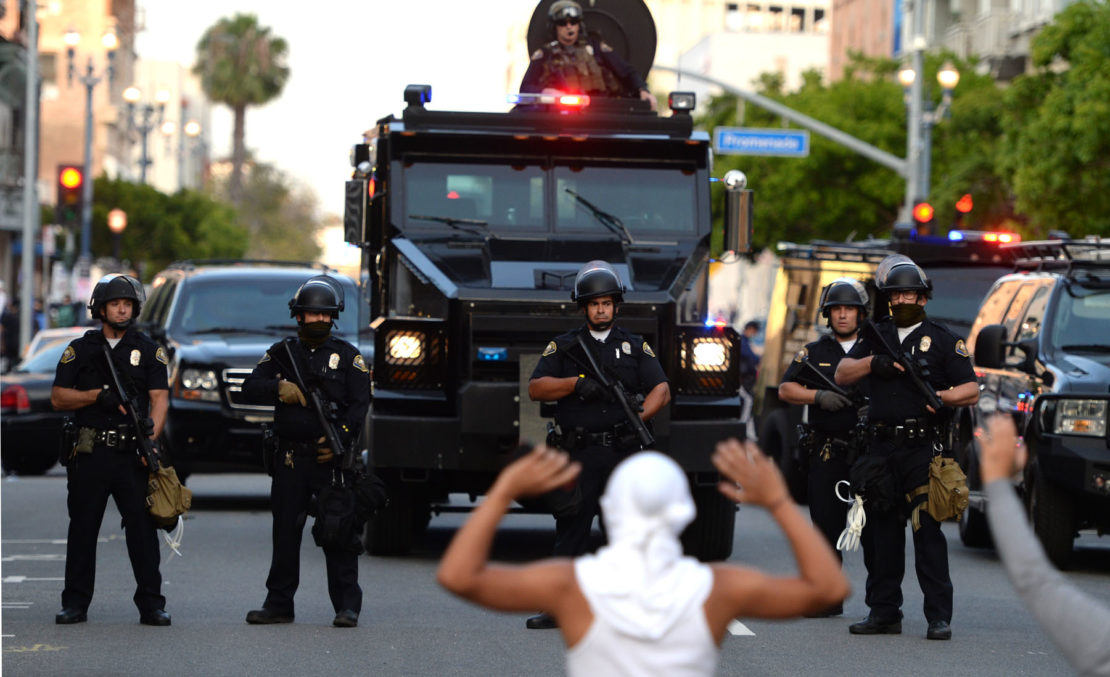 In a live-streamed briefing, Chief Luna said police had planned for only a few hundred demonstrators, whom he expected to protest peacefully, despite violence that had marred other protests in LA over the past few days. So the department supplemented its usual Sunday deployment with about 350 officers and placed concrete barricades in front of its headquarters.

The chief said he’d hoped to avoid looking like the department was using overwhelming force to counter the protesters. He explained that thinking at length on Monday during a second briefing:

“Keep this in mind, if hypothetically we didn’t have criminals mixed into this crowd, who didn’t commit so many criminal acts, and the police were out in quote/unquote force, what would we be saying today? ‘Oh my God, this is a police state. You overreacted.”’

“That has happened over and over in this country,” he continued. “It’s been a learning point of ours. We have been extremely successful in dealing with multiple protests over the years. And what we’ve learned is people want confrontations with the police many times. So what we do is, we back off, we hope that people will protest peacefully, that there is voluntary compliance… But at one point you’ve got to take the temperature of the crowd and eventually, if it starts getting ugly, we had hundreds of officers in this area ready to go in.”

Mayor Garcia has said police intelligence indicated that the same groups of looters were linked to other protests throughout the region but has declined to provide more details. Some thieves worked in coordination, quickly loading up cars and taking off as police were distracted. 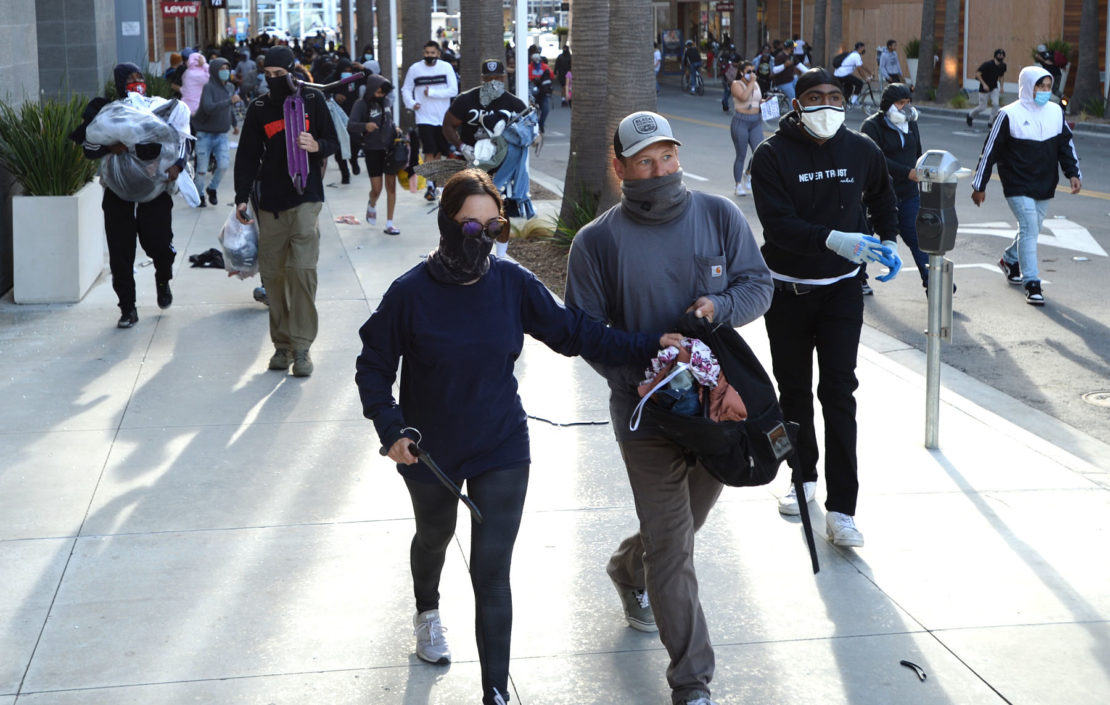 A crowd carrying loot away from the Pike Outlets. Photo by Stephen Carr.

“I think it’s pretty clear by seeing the type of activity and by seeing how organized it was, there was a strategy of going city to city and doing this criminal work,” Garcia said.

Like the police chief, the mayor also defended the LBPD’s preparation, stressing that no lives had been lost and nobody had been seriously injured even as officers stood up to instigators throwing rocks and setting off fireworks.

“I want to be very, very clear that the Police Department acted heroically, that we should be proud of the work they did and they are working their asses off,” Garcia said. “So this idea that they were just standing around is just complete B.S.”

Still, multiple officers said the department seemed hamstrung by the situation, facing agile looters who were able to stay one step ahead of officers as they focused on dispersing crowds of demonstrators.

According to one patrol officer, who requested anonymity to speak candidly, some cops were baffled when a supervisor told them to abandon a Walgreens that had a smashed-open door and people still milling around outside. When police left, the looting began anew, the officer said.

And as images of emboldened thieves spread across TV, the problems only grew worse, the officer said. “I’m sure word got out quickly that ‘These guys aren’t going to do anything.’”