For those who love and care for rabbits, a new strain of a deadly disease is a cause for fear and deep concern.

Kelly and other rabbit rescuers, shelters and people who live with rabbits have spent an entire year grappling with a strain of rabbit hemorrhagic disease that was first detected in France in 2010 and rapidly made its murderous way throughout the world. The strain RHDV2, is a calicivirus that is transmitted among both wild and domestic rabbits as well as hares and pika. It’s not contagious to other mammals, including humans, but it can be tracked into the home on shoes, clothing and paws of cats and dogs and flown in via mosquitoes, flies and other winged insects. If there are rabbits living in the house as well, the results are fatal. Symptoms may include loss of appetite; lethargy; high fever; seizures; nasal, oral or rectal bleeding; difficulty breathing; and sudden death.

“There is a one-to-five day period before an exposed rabbit shows symptoms,” said Daniel Marolda, the head volunteer at Long Beach Animal Care Services’ Bunny Barn, which houses surrendered and stray domestic rabbits. “Some do not show symptoms—they just pass away suddenly. We have a stray wait of five days already in place, and we have been careful.”

According to the United States Department of Agriculture, the earliest recorded case of RHDV2 in the United States was detected in September 2018 in Ohio. It has since then killed rabbits in the areas highlighted on the interactive map on this link. May 13 marks an exact year since the virus made its way into California, when a wild jackrabbit was found dead in Palm Springs.

“Los Angeles County is now considered a hot spot for RHDV2,” Kelly said. “In addition to killing an unknown number of wild rabbits, RHDV2 has impacted 46 households with domestic ‘backyard’ rabbits in Southern California since July 2020.”

For 12 months, rescues, shelters and people who have rabbits in their homes have dealt with the growing threat to the creatures in their care.

“It looks like it’s here to stay,” said Caroline Charland, founder of The Bunny Bunch. “People need to realize how serious this is. Rabbits need to live indoors as house rabbits anyway due to the heat, parasites and predators killing them outdoors. Some people let their rabbits play outside even though they live inside, but we suggest not even doing that.” 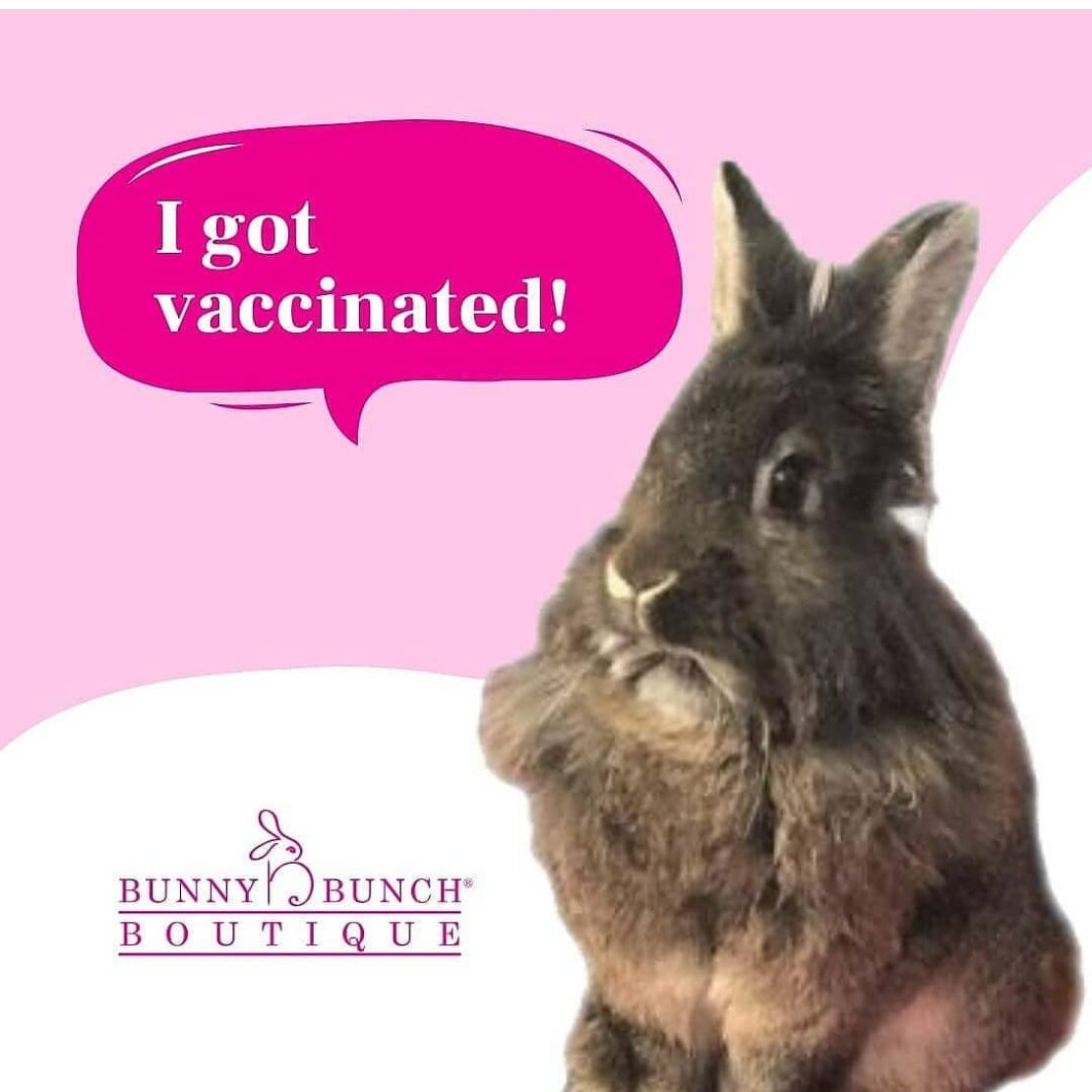 Vaccinating your rabbit is imperative. California is one of several states that was fortunate to be approved to receive emergency vaccine doses. Graphic courtesy of The Bunny Bunch

Charland emphasized the necessity of vaccinating domestic rabbits to stop the spread of the disease. No approved vaccine is yet manufactured in the United States, but two European vaccines have been approved for emergency use in states that have confirmed cases of RHDV. The Bunny Bunch, the Los Angeles Rabbit Foundation, the House Rabbit Society and all responsible rescues vaccinate their adoptable rabbits. Anyone with an unvaccinated rabbit should contact their veterinarian or one of the clinics listed at the end of this article.

Kelly said that state-by-state approval of the imported vaccines will likely continue but expects that a domestic variety will be developed by the time RHDV2 has spread nationwide.

As with COVID-19, rabbit rescuers and housemates have had only a year to deal with a previously unencountered illness. The disease has challenged their ability to care for and foster the rabbits.

“The RHDV2 virus has had a dramatic, negative impact on our life-saving efforts,” Kelly said. “This mainly occurs on the front end, as we are unable to save rabbits abandoned in parks. Rabbit volunteers and caretakers are afraid to touch outdoor rabbits for fear of bringing the virus home to their own rabbits. On the adoption end, the expense of RHDV2 vaccinations—all our rabbits are vaccinated prior to adoption—coupled with the skyrocketing cost of spay/neuter for rabbits and vet care in general, have impacted how many rabbits we can financially support within our organization, and that in turn reduces the number of rabbits we can save and adopt out. We could save more rabbits if we had more foster homes with no rabbits in the house right now.”

People wanting to foster or adopt rabbits have new protocols that have been in place for the better part of a year. Rabbits coming in to Bunny Bunch’s Boutique and Cotton Tail Inn for grooming or bunny sitting must live completely indoors and be vaccinated for 12 days or more. The same goes for potential adopters wanting to do a meet-and-greet between their bunnies and the ones at the rescue. The Bunny Bunch requires all of their rabbits to be vaccinated and quarantined in foster homes for two weeks.

The Los Angeles Rabbit Foundation requires their adopters to get RHDV2 booster shots for their rabbits every year. The organization had all its rabbits vaccinated as soon as the imported shots were approved for emergency use and are now scheduling the annual booster shots. Instead of a facility, the group has a network of foster homes for the bunnies, who are kept indoors.

“If there were a breakthrough case [of the disease]—no vaccine is 100%, so that is possible—it would impact fewer rabbits than in a larger shelter.”

“The best way to protect your rabbits from RHDV2 is through a combination of vaccination, indoor housing, and biosecurity measures.” ~ Los Angeles Rabbit Foundation 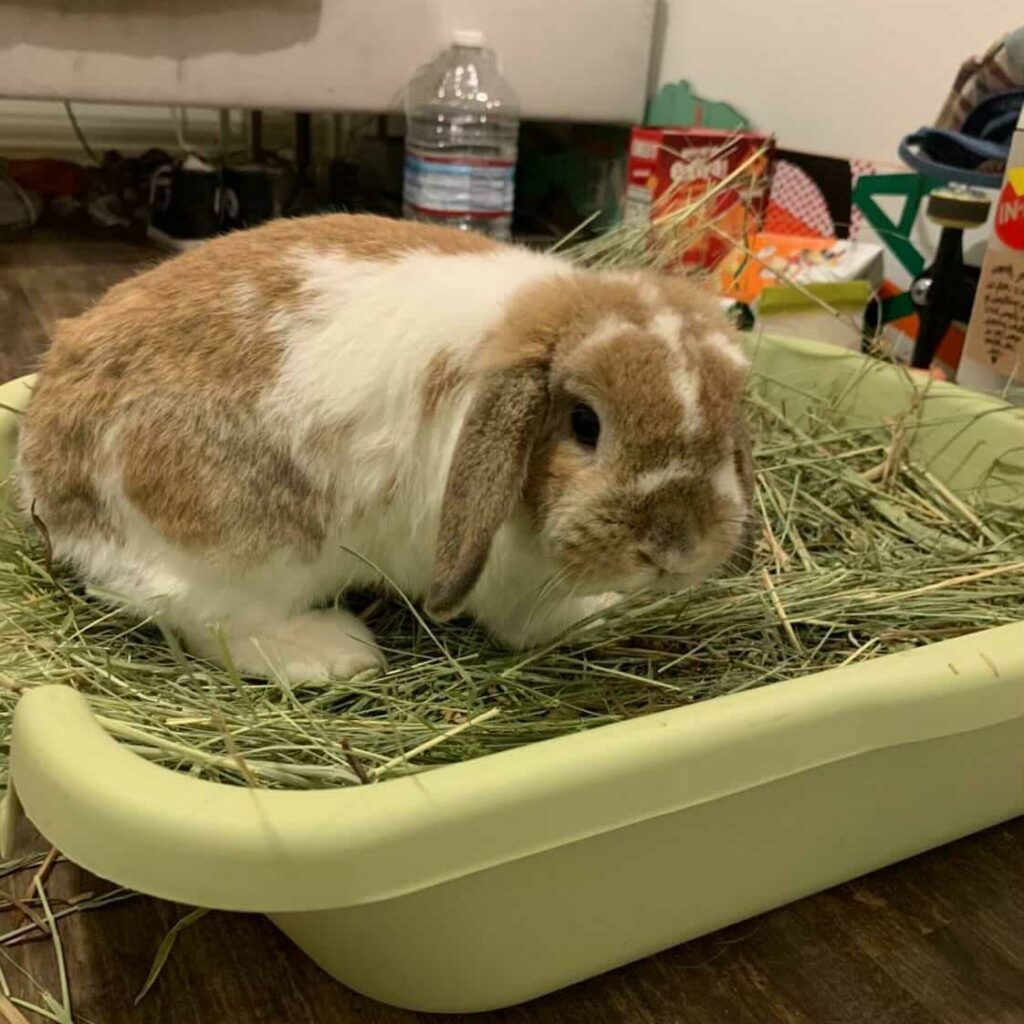 Rabbits can be litter-box-trained just like cats. A layer of hay on top of the litter is recommended. Photo courtesy of The Bunny Bunch.

All the rescue organizations offer detailed guidelines for preventing infection from RHDV2. They’re available on their websites, and if you live with a rabbit, they’re practically required reading. Here’s an aggregative sample:

Visit any of the links in the article for more information on RHDV2, adoptions and fostering. All adoptions are conducted through appointment.

If you see a deceased rabbit whose cause of death is unknown, do not touch the rabbit.

For domestic rabbits, contact California Department of Food and Agriculture at: 909-947-4462.

For wild rabbits, contact California Department of Fish and Wildlife at 909-358-2790.