Donors wanted to help this dad and his 5 girls; what does he ask for? Bunk beds • Long Beach Post News
- ADVERTISEMENT -

Since the public got a peek into their lives, the Alcala family’s Central Long Beach apartment has started to look even more homey thanks to donations from the community.

After a Long Beach Post story highlighted single dad Jesse Alcala and his five daughters setting up for virtual classes on the first day of school, readers were eager to find a way to support them. This weekend, they got their wish.

On Wednesday, the five young girls showed off how they decorated their set of newly donated bunk bed with fairy lights. They went right alongside the family photos in sparkly frames on the wall next to the top bunk.

On their lunch break from school, 6-year-old Sarah was excited to show how the ladder on the new bed detaches and Allison, 11, giggled as she took it off trapping 8-year-old Kima on the top bunk. Kima shrugged as she carefully climbs down the side, laughing with her sisters.

“It’s amazing! Accept we might get up too fast and bump our heads,” joked the oldest, 12-year-old Charlotte, as she laid on the lower bunk and demonstrated bumping her head. The girls share, two to a bunk, and Sarah often sleeps at her mom’s home.

The new bunk bed comes courtesy of donors and Tito Rodriguez, known as “Hood Santa.” He’s the founder of the nonprofit Local Hearts Foundation. After the story about the Alcala family, anonymous donors got in touch with Rodriguez asking how to help the family.

“I didn’t know what to say,” Jesse said about his reaction when Rodriguez called to tell him. “Believe me, I’m very thankful.” 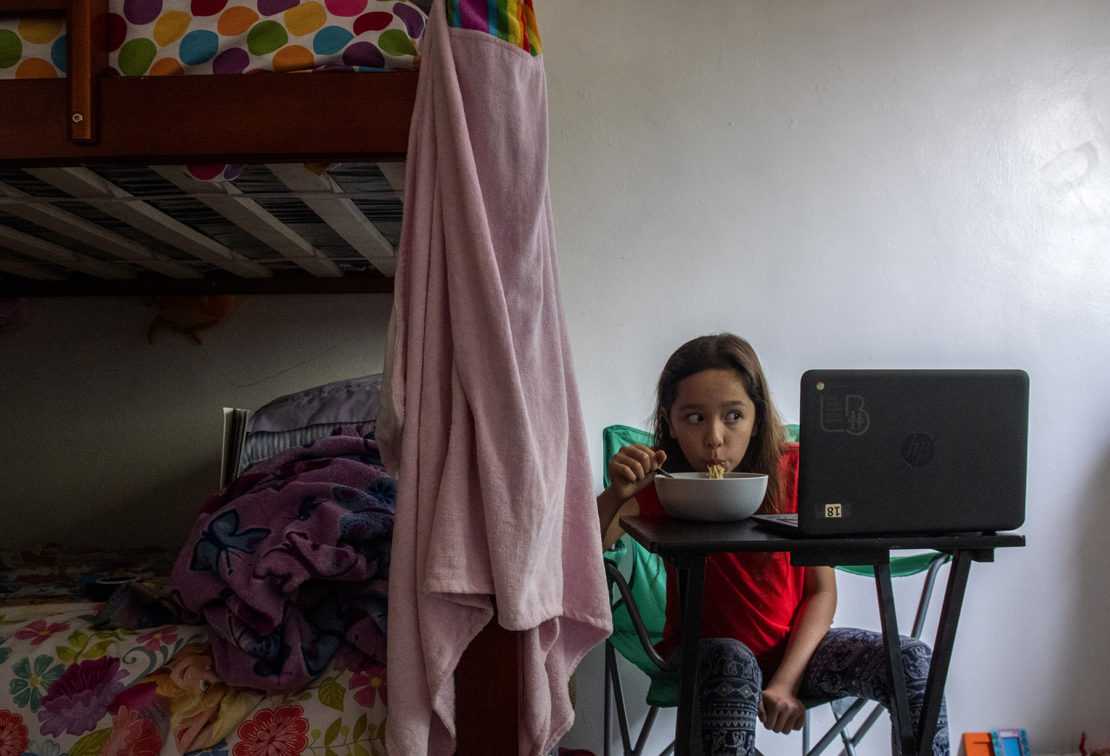 Charlotte Alcala, 12, gets in a few last bites of her ramen noodles as her class starts after her lunch break as she sits in her room next to the new bunk beds in Long Beach Wednesday, Sept. 9, 2020. Photo by Thomas R. Cordova.

Rodriguez said donors reached out to him, asking what the family needed and when he called Jesse, the father said his girls needed a bunk bed after the last one he got them was rusted and needed to be returned.

Once they had a goal, the community response was swift: One of the donors posted it in a neighborhood group and got more donations. Another woman reached out and sent money to Rodriguez, and he added some money from his foundation. Over the weekend, Rodriguez called Jesse and told him to meet him at a local furniture store.

“He’s so humble; he wanted to get the cheapest one,” Rodriguez said. “I said, ‘Nah, bro, we’ll get something cool,'” one that was good quality and could be separated into two beds as the girls got older.

“He was so happy for his girls,” Rodriguez said. 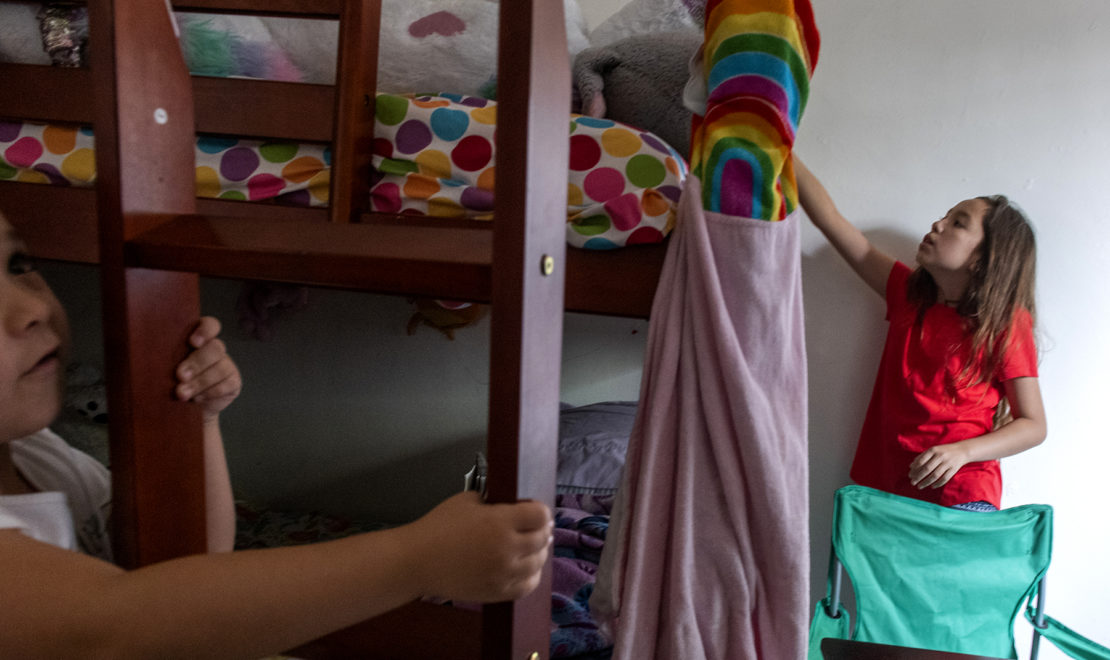 Sarah Alcala, 6 left, moves the ladder to the upper bunk bed as her sister Charlotte,12, reaches up for an item on the bed while in Long Beach Wednesday, Sept. 9, 2020. Photo by Thomas R. Cordova.

It isn’t the first time Rodriguez has helped the family: He and Jesse met last year when the dad was standing in line for one of the turkey giveaway events Local Hearts Foundation puts on every year. As a man with five young girls, Jesse stood out, Rodriguez said.

While they talked, Rodriguez waited for the seemingly inevitable request to cut in the long line—something he gets often at his turkey giveaways—but it never came. Jesse was happy to wait. Rodriguez watched at a later Christmas raffle event as Jesse waited for hours to try to win a scooter for his daughters.

Rodriguez started following Jesse on Instagram and saw he was walking his daughters to school every day and taking buses and trains to get to work.

“I thought, this guy’s trying,” Rodriguez said. “… We got to get this guy a van; he’s got a whole basketball team.”

With the help of donors and local cable news coverage, Rodriguez was able to get a van for Jesse and his daughters.

But Rodriguez isn’t done helping the family: When he went to deliver the bed, he noticed the girls doing school from camping chairs and TV trays, so he’s working on getting them desks that will fit in the apartment. Other donors also gave headphones to the girls so they could concentrate on their own classes.

“The cool thing about Jesse is he doesn’t just take just to take,” Rodriguez said. “He really sat with the question: What do his girls need?”

Jesse said he’s thankful for the help and that he has a home and a vehicle, but he’s also hesitant to take help from those who might need it more. Someone has offered to start a GoFundMe to help the family and he’s mulling over how to best go about that.

“There’s a lot of people that are homeless or poor,” he said as he was making ramen noodles for 5-year-old Ariel. He gestured to the stack of Top Ramen boxes on the counter. “I don’t need to take food from other people’s mouths.” 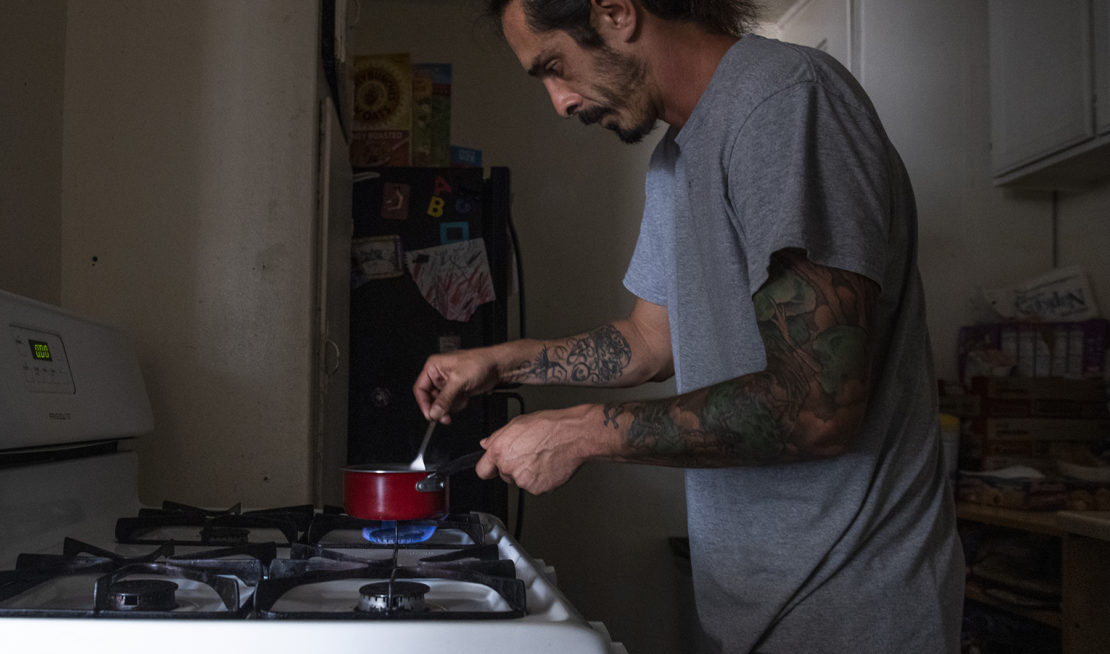 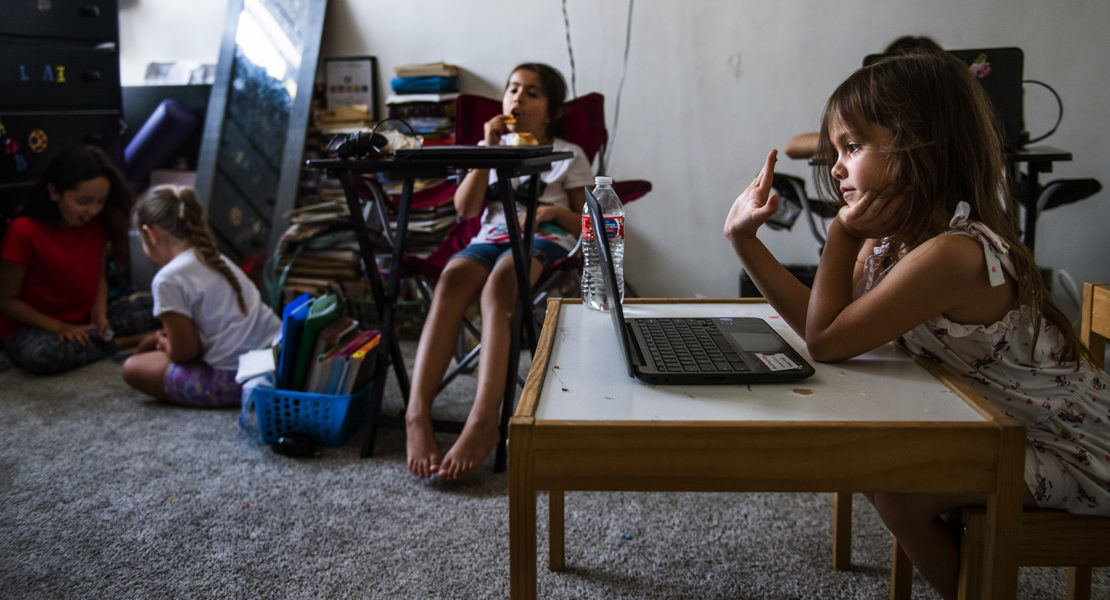 Ariel Alcala, 5, raises her hand in her kindergarten class as her sisters are on their lunch and recess breaks during virtual school. Photo by Thomas R. Cordova. 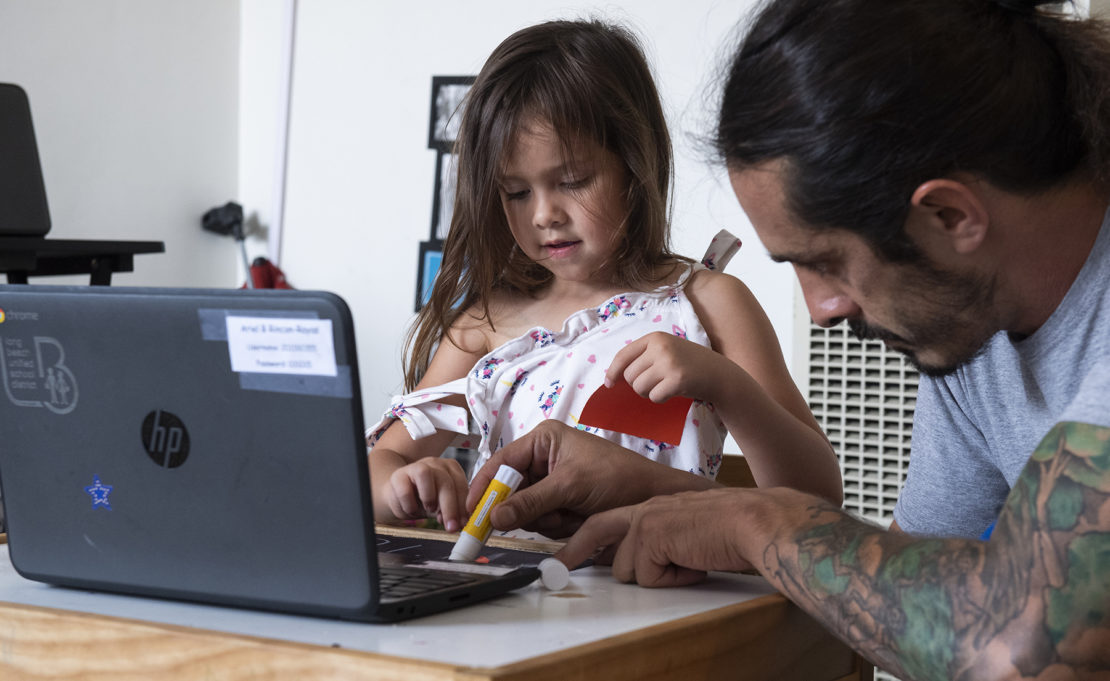