It’s the first day of a new school year, but instead of sending his five daughters to their schools, Jesse Alcala, 35, is working out where to sit each one inside the family’s two-bedroom apartment in Central Long Beach.

“These two like to talk to each other,” he said, pointing to the two youngest, 6-year-old Sarah and 5-year-old Ariel.

He ends up sitting them with Allison, 11, in the living room so she can help keep an eye on them. The other two, 8-year-old Kima and 12-year-old Charlotte, sit in their bedroom in folding camping chairs and TV trays as desks. All five will later have to switch to the girls’ bedroom because it’s the one with the air conditioner and the sun will inevitably make the front of the apartment too hot in the afternoon.

At 8 a.m., Allison logs onto Google Meet wearing her rainbow slippers and her first day outfit: “How are you doing?” her teacher asks the class before showing them how to change their icon photo. 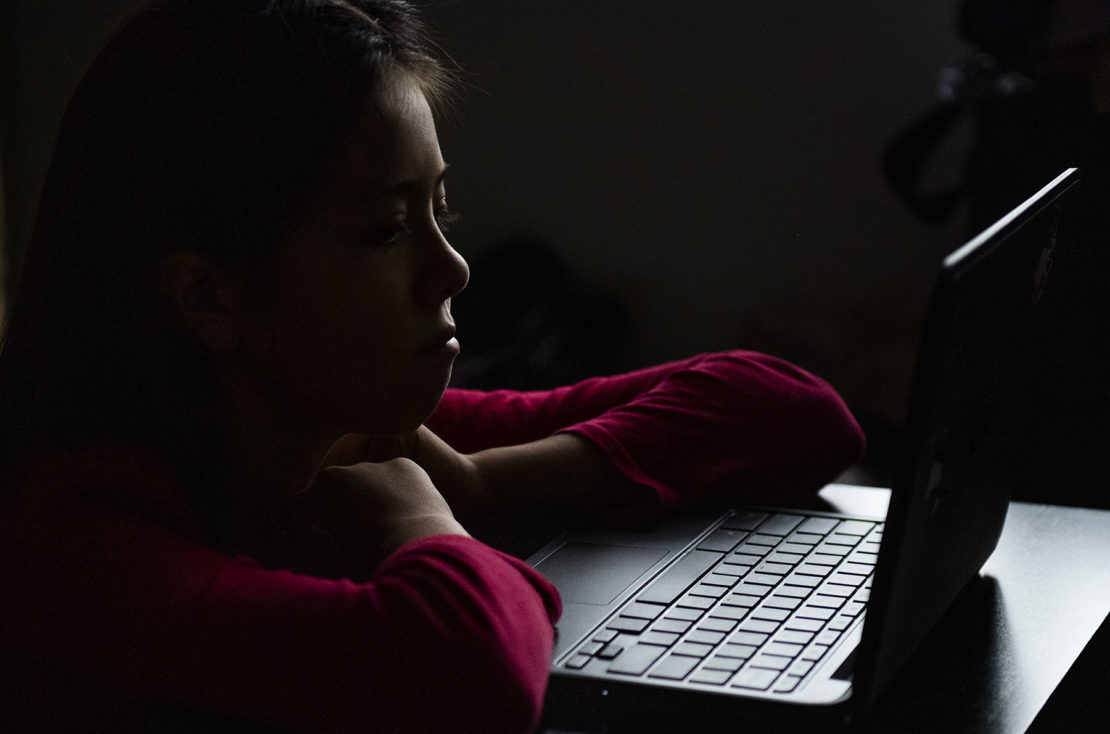 The morning light comes through the living room window as Allison, 11, attends the first day of school through her laptop from her apartment in Long Beach Tuesday, Sept. 1, 2020. Photo by Thomas R. Cordova.

This is school during the coronavirus pandemic: Thousands of Long Beach parents are watching as their children plop in front of computers to see their classmates and teachers in tiny squares. Kids across the state are starting the school year how they ended it in June after local officials closed campuses in mid-March to prevent the spread of the coronavirus. State restrictions will not allow schools in Los Angeles County to reopen until case and positivity rates lessen.

The school district has provided students with Chromebooks and hotspots as needed, so each girl has their own for classes. On Tuesday morning, Jesse still had to take Sarah to school to get her picture taken and get the rest of her school materials. Sarah’s mom, Iline Crawford, came after her overnight shift at Walmart to take her. She’s worried about solely online school after seeing how Sarah struggled to pay attention at the end of the last school year.

“It was hard to finish the school year online,” Crawford said.

Long Beach parents were given the option to go fully online, hybrid or fully in person classes (once schools are allowed to reopen). Jesse opted to do fully online for the year to keep his daughters from getting sick and because the social distancing precautions for in-person learning—like plastic partitions and strict spacing in lines—seemed to him like prison.

Jesse is a single father with full custody of four of his daughters and shared custody of Sarah. Right now, he does odd jobs to make ends meet, but he’s also a certified massage therapist. Working while taking care of his kids was hard before the pandemic, but it’s even more difficult during it because he has nowhere consistent to put his daughters in order to work.

Right now he’s thankful for his big family—his daughters have each other to socialize with while they can’t do it at school in the traditional way. Jesse has placed importance on learning and school for his kids: even in the summer, he had them do two hours of “learning time” in the mornings while he cleaned up their home. Their living room features a mountain of books against the wall underneath the TV. 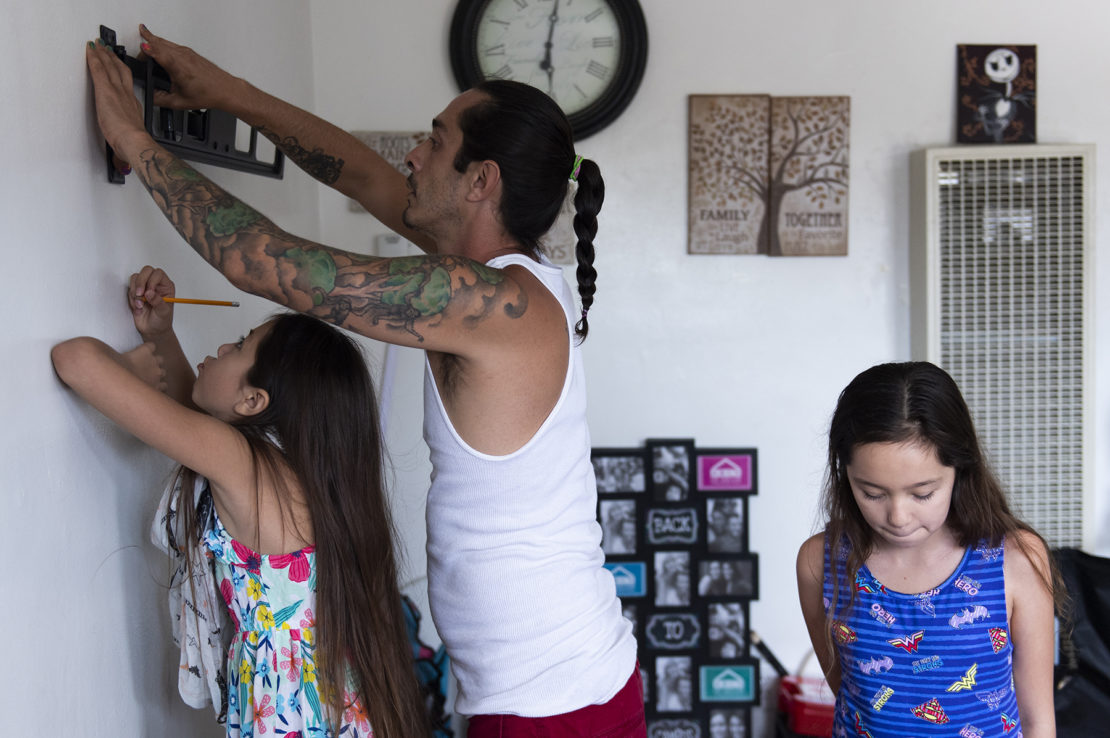 Jesse Alcala mounts a TV on the wall with the help from his two oldest daughters Allison, 11 left and Charlotte, 12 right, in Long Beach Monday, Aug. 17, 2020. Photo by Thomas R. Cordova.

“You can never stop learning,” is the mantra Allison dutifully says when her dad asks, “What do we always say?”

On the days Sarah is with her mom, Crawford also sits with her to do the schoolwork. Jesse is proud of how advanced his daughters are.

“I can do this!” Kima said proudly as she crossed her eyes and giggled.

“No, I meant your reading level,” her dad laughed. She reads at a fifth grade level even though she’s just starting third grade, he explained.

While the younger girls were excited about starting the new school year, the oldest said they were dreading the stack of textbooks they brought home. 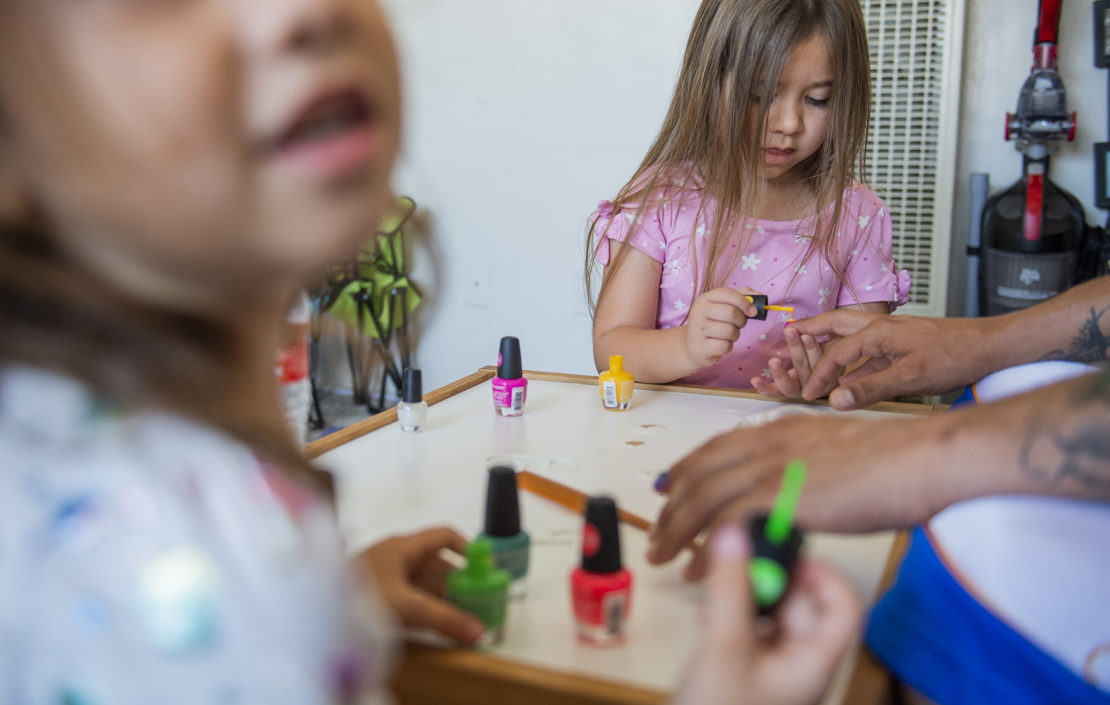 Sarah, 6, paints the nails of her father, Jesse Alcala, as the girl’s summer break comes to an end in Long Beach Thursday, Aug. 27, 2020. Photo by Thomas R. Cordova.

In the week before school started, the girls relished the last few days of summer with water balloon fights outside in the afternoons and painting their dad’s fingernails bright colors, a weekly activity in their home. Charlotte, the artsy one of the family, carefully painted a silver sparkly diamond on one nail with the pointy end of a floss pick. Ariel, the youngest, swiped purple and turquoise stripes with a dollop of yellow on top on another.

As a single dad, Jesse said he often gets weird looks when he’s out with his daughters or doing their laundry at the laundromat and he hopes the obvious child-like nail polish on his hands helps convey that he’s a dad and not a creep.

“It’s like only commercial dads can wear tutus,” he said. “… I didn’t graduate college or high school, my accomplishment is that I’m a father.” 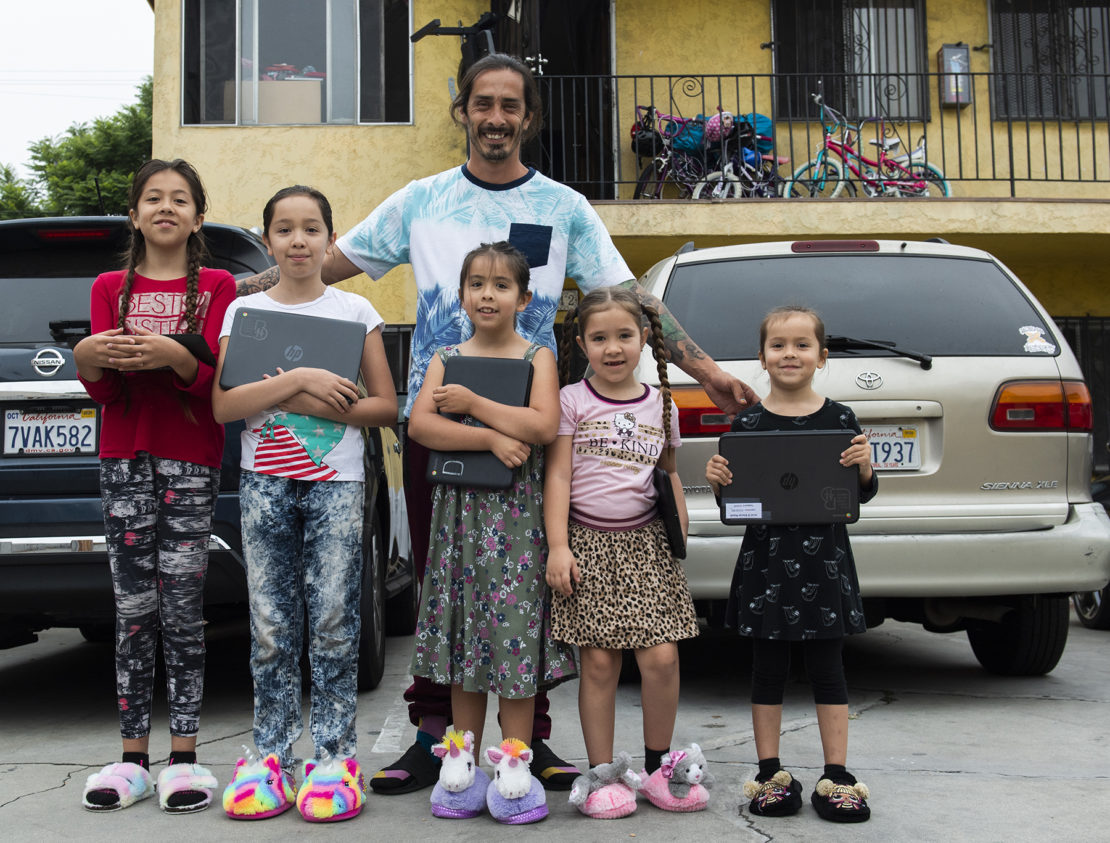 Left to right: Allison, 11, Charlotte, 12, Kima, 8, Sarah, 6 and Ariel, 5, with their father Jesse Alcala stands behind them as they hold their laptops for the first day of school in Long Beach Tuesday, Sept. 1, 2020. Photo by Thomas R. Cordova. 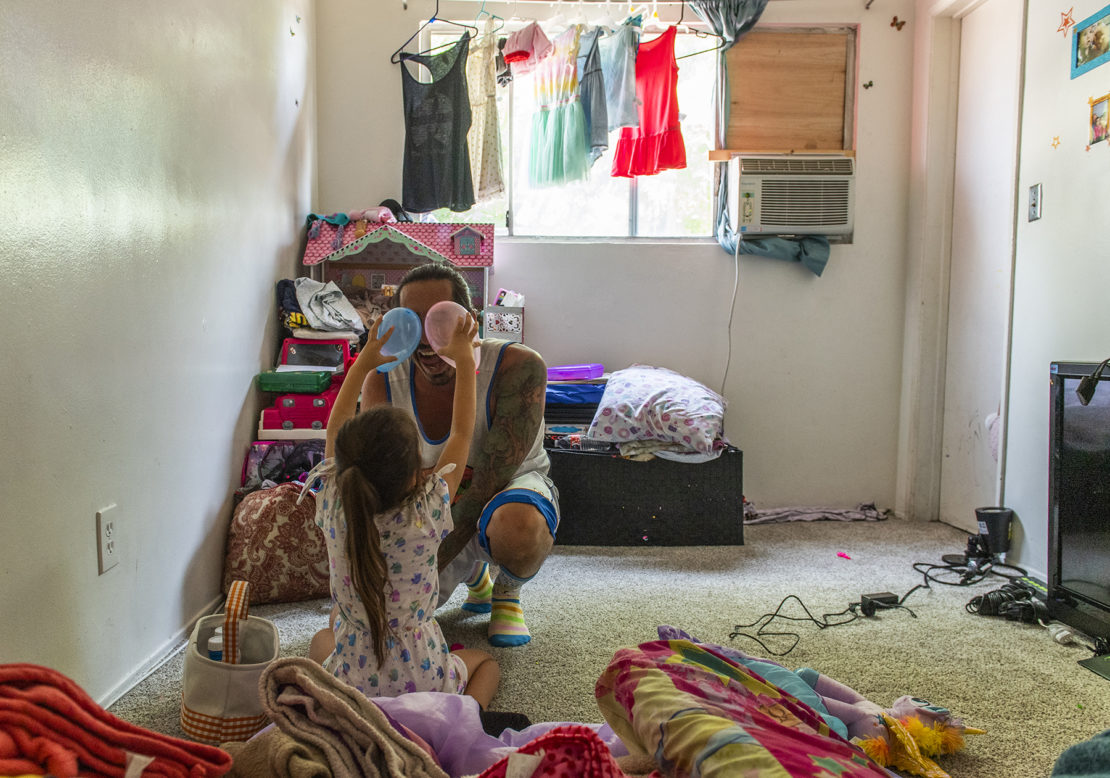 Ariel, 5, places “bug eyes” on her father Jesse Alcala’s face as the two clean the girls’ room after a balloon fight as the girls enjoy their last days of summer break in Long Beach Thursday, August 27, 2020. Photo by Thomas R. Cordova. 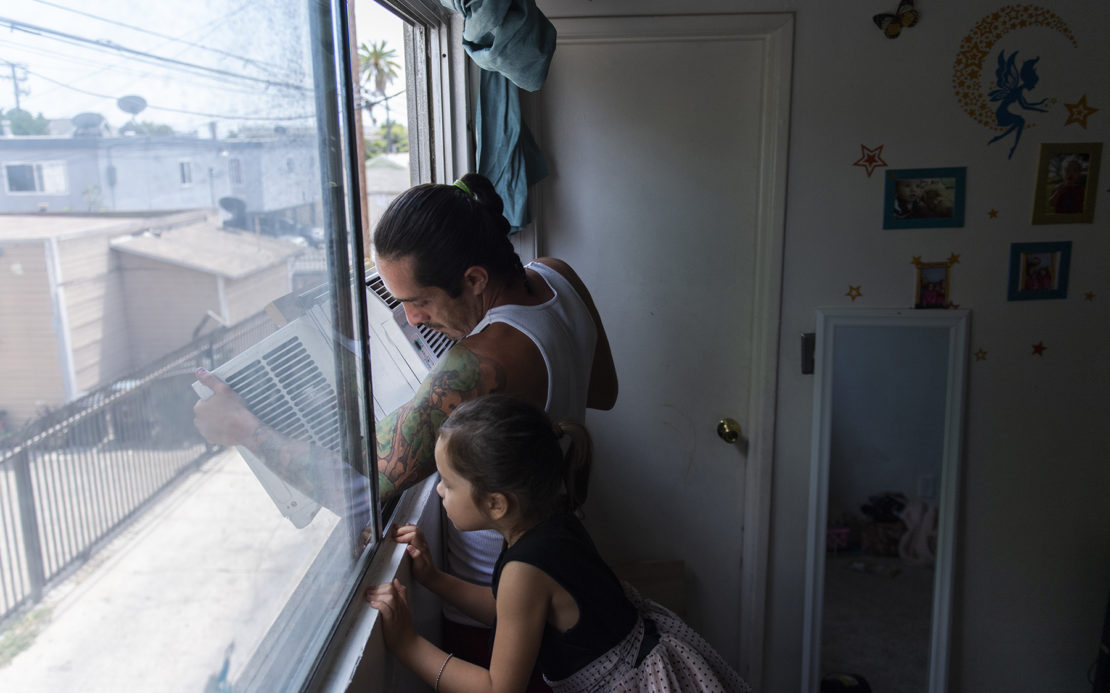 Jesse Alcala empties the water from his air conditioner in his apartment as his youngest daughter Ariel, 5, looks on in Long Beach Monday, Aug. 17, 2020. The girl’s room was the only room in the apartment that has air condition and two of the five girls will have their class time in the room. Photo by Thomas R. Cordova. 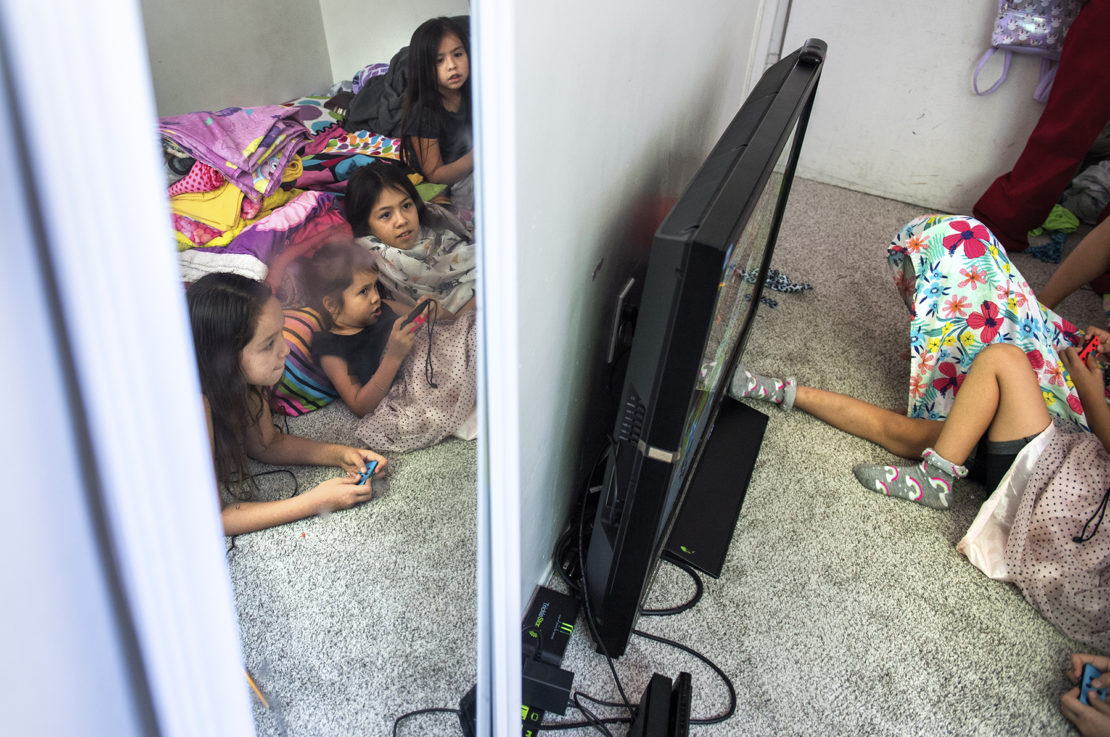 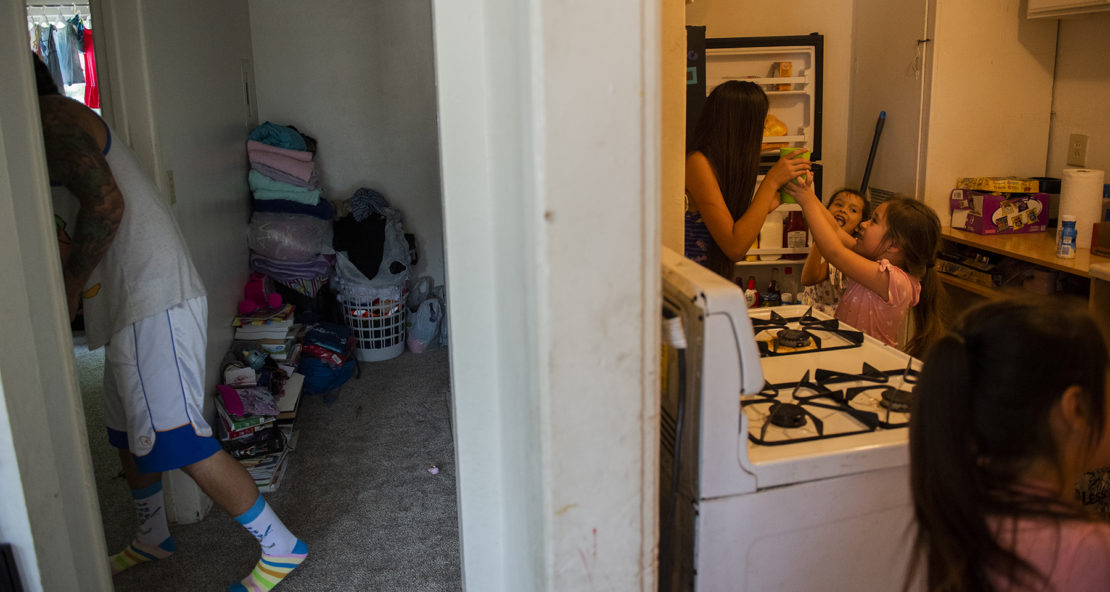 The girls head into the kitchen as Jesse Alcala heads into the girl’s room as he cleans the 2 bedroom apartment as the girls enjoy their last days of summer break in Long Beach Thursday, Aug. 27, 2020. Photo by Thomas R. Cordova.