She's guarded kids on Willow Street for 14 years; not even a pandemic could break her streak • Long Beach Post News
- ADVERTISEMENT -

When Long Beach Unified elementary schools opened their gates a few weeks ago, it wasn’t only students and teachers who headed back out of the house. Crossing guards like Melinda Vann were back as well, part of the network of school support that laces across the city.

Vann has been in charge of helping students cross a busy stretch of Willow Street between Los Coyotes Diagonal and Woodruff Avenue in East Long Beach for the last 14 years, and has worked as a crossing guard in the city for 18 years.

“I know all the kids at my corner. They were all happy to see me and I was so happy to see them,” said Vann. “Any time Christmas or summer vacation ends, they always come up and give me a hug—especially after the last year we were all so happy.”

There was plenty of news coverage of students being reunited with teachers, but at 60 intersections across the city there were these reunions between students, parents and their neighborhood crossing guards, too. At Vann’s post, elementary school students who hadn’t seen her for a year were jumping up and down with excitement at her greeting them on their walk back to campus.

“She’s a part of the neighborhood. She’s seen all the kids here grow up,” said Katie Trainor, a mom who was crossing Vann’s intersection with her son. “It’s so great to see her still here.”

Neighborhood schools are such an important part of the cultural fabric in all corners of the city that residents actually passed a change in the city’s municipal code requiring crossing guards for students at busy intersections near schools. 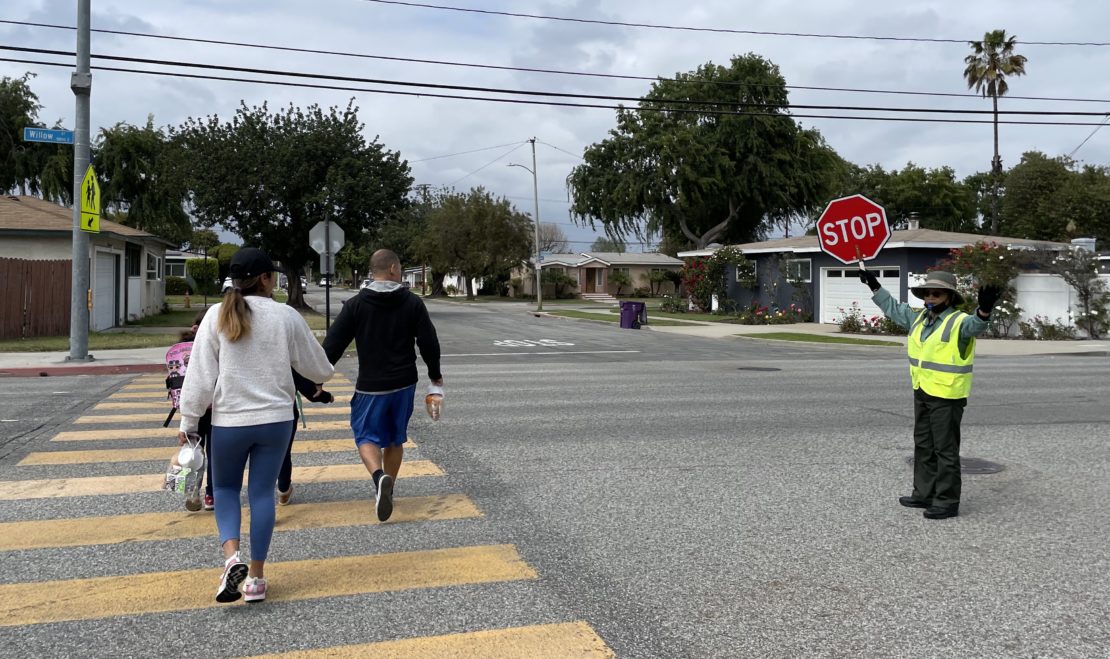 The jobs are part time and require odd availabilities—a few hours in the morning, a few more in the afternoon. Vann lives in Cambodia Town and is a Long Beach native. After working as a teacher’s aide while raising her four children, she asked a friend who was a crossing guard how to apply. She put in her application, did an interview at City Hall and was hired; like all new hires, she spent a few years as a substitute crossing guard, working all over the city.

“After that, you get to pick your own corner, and I’ve been here ever since, for 14 years,” she said.

Then came the COVID-19 LBUSD closure on March 13, 2020. The closures were initially thought to be for a few weeks but instead extended for more than a year.

“Nothing happened; everything stayed closed,” said Vann. “I was off work with no pay. I was feeling depression, feeling terrible. Every crossing guard got no pay so I had to apply for unemployment.”

Unemployment helped keep Vann in her home, but she said not working and not being enmeshed in the community took a real toll over the last year. Her supervisor kept in regular touch with her providing the same “no update” update, until finally she got word that elementary schools were reopening. For the last few weeks, that’s only meant an hour in the morning and an hour in the afternoon, but with middle and high school students returning this week Vann is back up to her usual shift.

Vann said she enjoys being a crossing guard, but that it’s a harder job than most people understand. When school is back in session after winter or summer breaks—or a year off due to COVID-19—drivers are out of the habit of looking for kids in crosswalks.

“They don’t stop for the first couple days,” she said.

As a result, she’s been hit by a car on the job and has occasionally had to request motorcycle officers to write tickets to motorists who don’t stop. There’s also the fact that crossing guards are exposed to the public as people who work outside in a fixed location.

“I was nervous about coming back to work because I’ve been hearing all this about Asian hate,” Vann, who is Cambodian, said about the recent rise in hate crimes against people of Asian descent in other parts of the country. As homeless encampments have proliferated along the 405 Freeway, it’s also left Vann concerned about being by herself at her intersection after most of the kids have crossed to school.

“On Monday a guy came by and screamed at me, two or three times, just, ‘Ahhh!’” she said. “Those things worry me.”

Still, Vann said, she’s happy to be back at work helping the kids in the neighborhood get to and from school.

Editor’s note: This story has been updated to show that crossing guards are overseen by the city’s Public Works Department, not the Police Department.