On Monday morning, first-grader Juan Reyes walked past a health screening checkpoint and a row of rainbow star balloons welcoming him to the first day of in-person class at Alvarado Elementary School in Signal Hill.

“Are you excited to be back in class?” asked Principal Cheryl Huber as she greeted him at the front entrance.

“And you know who else is so excited? Your teacher Miss Hall. Are you ready to go and see her?” asked Huber.

After more than a year of virtual instruction, Long Beach Unified on Monday became the state’s first large public school district to open its campuses for in-person learning, with more than 14,000 students returning to class in transitional kindergarten through the fifth grade.

The district will offer a hybrid schedule with students spending about 2.5 hours on campus, five days a week. Middle and high school grades are expected to return to class next month. As of Monday, about half of elementary school students—more than 16,000—are opting to learn from home.

The state’s fourth largest school district had been mostly closed for on-campus instruction since March 13, 2020, as public schools across the state shuttered to prevent the spread of COVID-19.

With COVID case rates dropping, state legislators this month reached a deal that would allow public schools to tap into an extra $2 billion in funding if they allowed select groups of students back into classrooms. Los Angeles Unified is expected to reopen in April.

At Alvarado Elementary on Monday, students lined up to have their hands sanitized and temperatures checked before they headed to class. Teachers cheered and clapped as the kids walked through the front gate.

“It’s nice to see their whole little bodies,” said second-grade teacher Leslie Courtney, who has been teaching virtually over the past year. 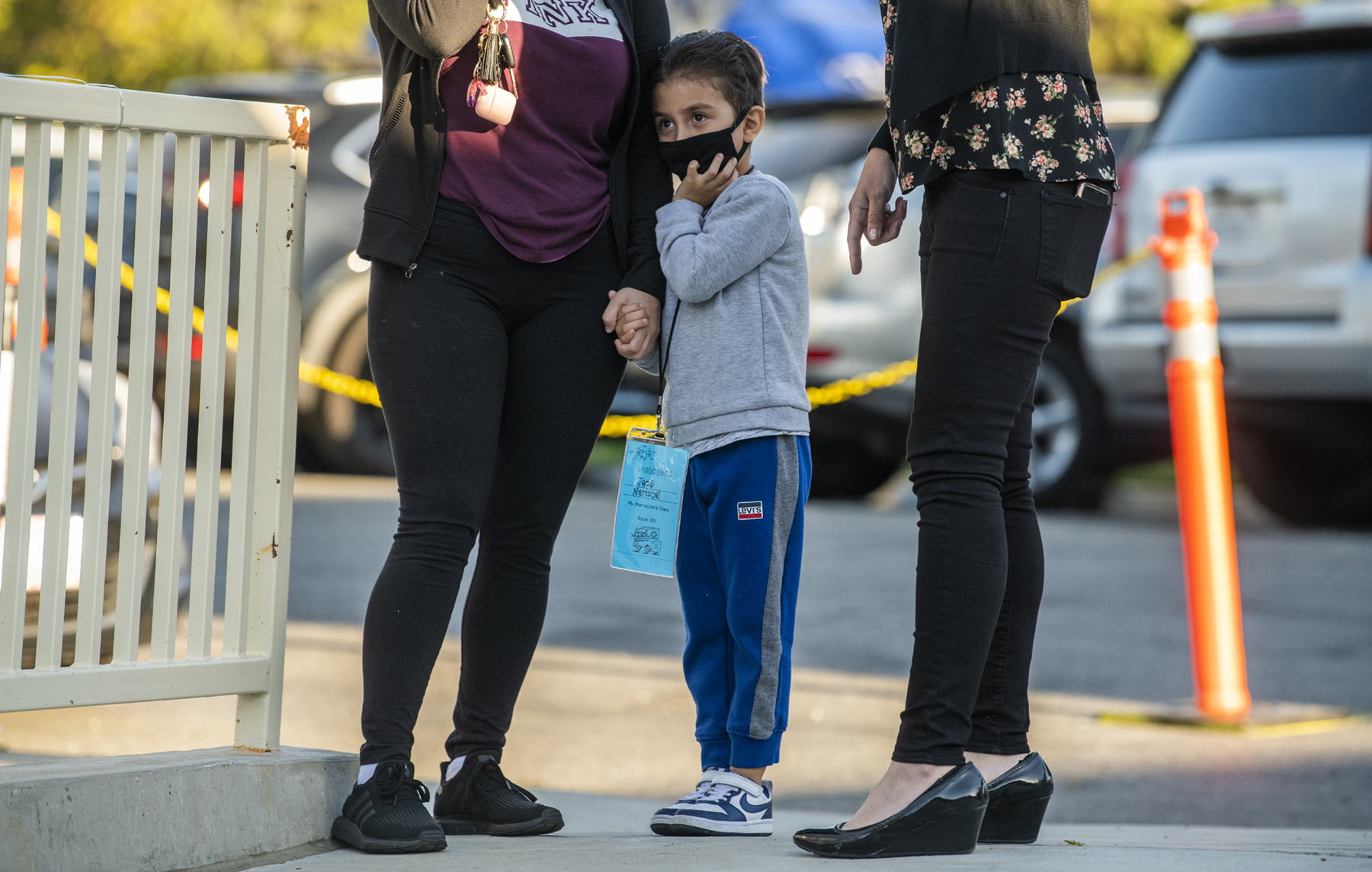 Jacob Mariscal holds on tightly to his mother’s hand before entering his kindergarten class on the first day of in-person school at Alvarado Elementary School in Signal Hill Monday, March 29, 2021. Photo by Thomas R. Cordova.

Like many teachers, Courtney, a teacher at Alvarado for 25 years, said she feels safe to return to the classroom after getting the COVID-19 vaccine. Long Beach in January was one of the first jurisdictions in the state to offer the vaccine to all of its educators, including at Cal State Long Beach and Long Beach City College.

Overall, more than one-third of eligible adults in Long Beach have now received at least one dose of the vaccine, said Mayor Robert Garcia, who was on hand to greet returning students at Alvarado.

“This is the best day we’ve had in the entire last year,” Garcia said.

While teachers were excited to be back, parents said they were relieved to have their children in class, even if just for a few hours.

“It’s a little bit of normalcy,” said Adam Van, as he watched his 11-year-old son Addison walk through the front door.

In a fourth-grade classroom, a dozen students sat quietly, drawing or writing on desks spaced for social distance as teacher Miriam Hadley instructed them to draw or write about something on their minds.

Hadley said she plans to take it slow for her in-class students after a strange and stressful year.

“The focus is on emotional needs first, academic later,” she said. 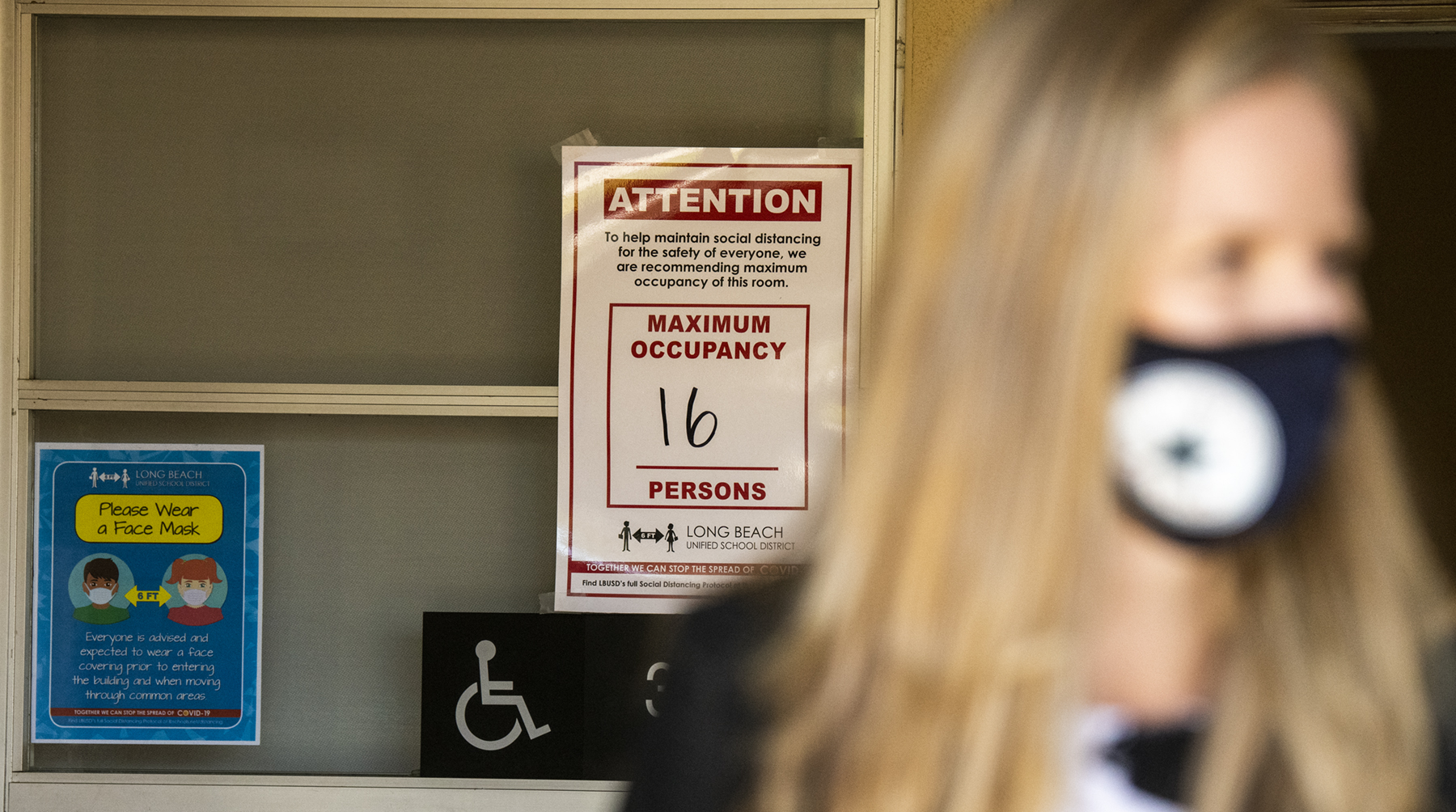 Max occupancy signs are placed outside of each room. Photo by Thomas R. Cordova. 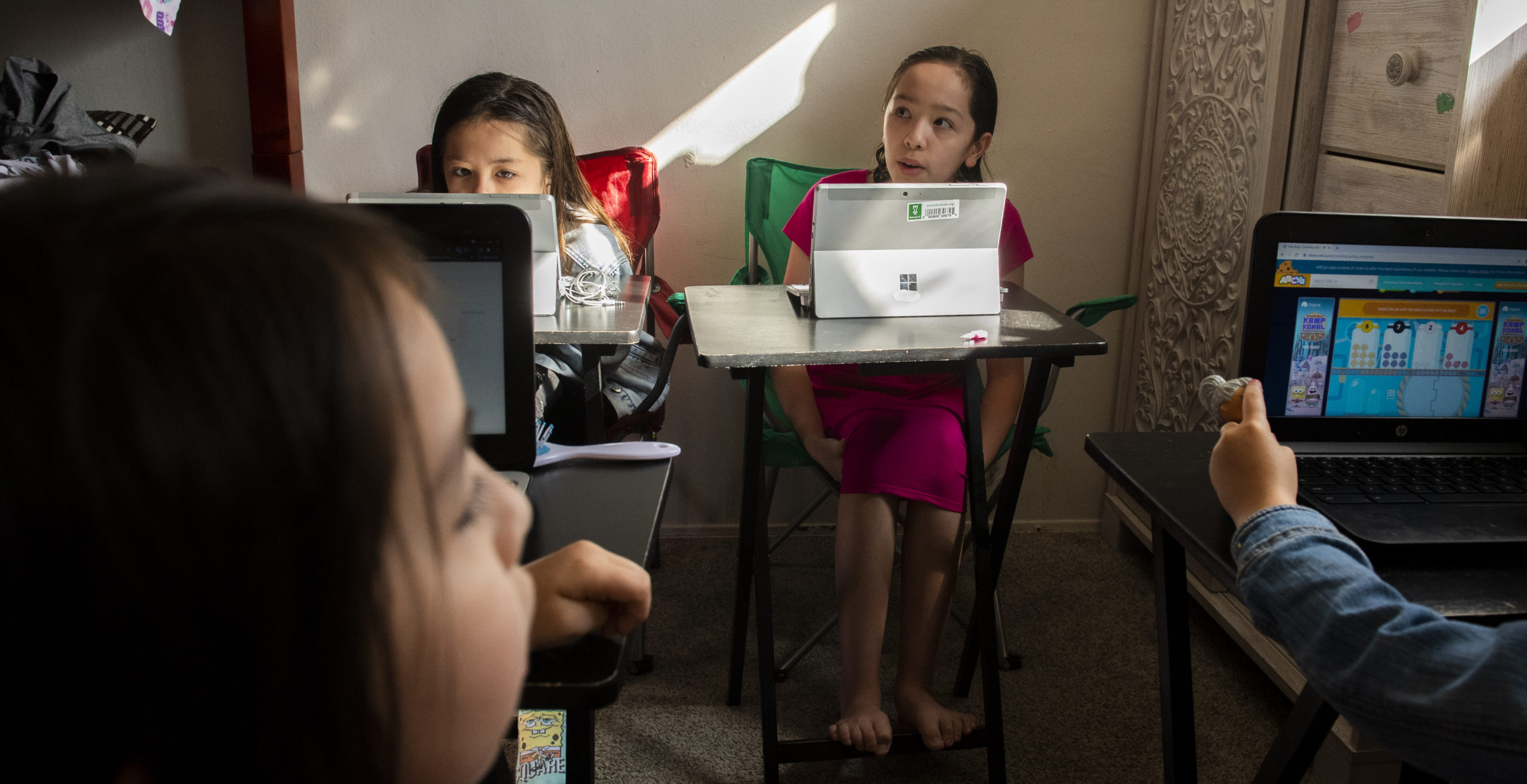 Over the past year, the girls—Ariel, 6; Sarah, 7; Kima, 9; Allison, 11; and Charlotte, 13—have been learning in a little classroom in their 8-by-10-foot bedroom. Each morning, they set up TV tray desks and camping chairs in the space between their double bunk bed and a white dresser topped with toys.

When it’s time for bed, they double and sometimes triple up on each bunk, alternating nights for who gets to sleep on the top.

Alcala, who works as a part-time dishwasher, said he doesn’t want his daughters going back to school in an environment where they have to be tested for COVID-19 regularly and can’t sit next to their friends.

“I feel like they’re learning more here at home,” he said. “I can keep an eye on them and I can see if they’re actually focusing.”

Charlotte, a seventh-grader at Franklin Middle School, said she prefers learning from home, though, “it’s a bit crowded sometimes.”

Her younger sister Allison, a fifth-grader at Lincoln Elementary, said she also likes to learn from home. Allison, a top student in her class, has been learning how to code since the third grade and said her favorite subject is math.

“I’m really good at algebra,” she said. “I take my math really seriously.”